Impact of a Prescription Support Tool to Improve Adherence to the Guidelines for the Prescription of Oral Antithrombotics: The Combi-AT Randomized Controlled Trial Using Clinical Vignettes
Previous Article in Journal

Background: Olaparib maintenance therapy has shown efficacy and tolerability in patients with platinum-sensitive, high-grade serous recurrent ovarian cancer (HSROC) with BRCA1/2 mutation (BRCAm). Our aim was to present real-world experience with olaparib in Korea. Method: We included HSROC patients with BRCAm treated with olaparib maintenance at four institutions in Korea between 2016 and 2018. Medical records were reviewed for clinico-pathologic characteristics, objective response, survival outcomes, and safety. Results: One hundred HSROC patients with BRCAm were included. BRCA1 mutation was present in 71 patients (71.0%), and BRCA2 mutation was present in 23 patients (23.0%). In terms of the best objective response with olaparib maintenance in 53 patients with partial remission from most recent chemotherapy, complete remission occurred in 12 (22.6%) and partial remission in four (7.5%), while 33 patients (62.3%) had stable disease. The 24 month progression-free survival was 42.4%, and 24 month overall survival was 82.1%. Grade 3 or more adverse events were as follows: anemia in 14 patients (14.0%), neutropenia in seven patients (7.0%), thrombocytopenia in two patients (2.0%), oral mucositis in one patient (1.0%), and soft tissue infection in one patient (1.0%). Conclusions: The safety and effectiveness of olaparib maintenance treatment in a real-world study were consistent with those reported in previous clinical trials.
Keywords: olaparib; recurrent ovarian epithelial carcinoma; maintenance therapy; treatment efficacy; adverse effects olaparib; recurrent ovarian epithelial carcinoma; maintenance therapy; treatment efficacy; adverse effects

Ovarian cancer is the second most common cause of death related to gynecologic malignancy and the eighth leading cause of death from cancer in women worldwide [1]. The progression-free survival (PFS) of patients with advanced ovarian cancer after first-line chemotherapy is 4–12 months [2]. For ovarian cancer patients who respond to platinum-based chemotherapy at recurrence, a median PFS of 5–6 months from end of treatment has been reported [3,4]. Next-line chemotherapy can be offered to patients, but the treatment-free interval usually shortens each time recurrence is treated. Toxicity due to chemotherapy and acquired drug resistance are barriers to further treatment in patients with recurrent ovarian cancer, and tolerable treatment options for long-term disease control are needed.
Olaparib (Lynparza™) is a poly (adenosine diphosphate–ribose) polymerase (PARP) inhibitor that induces synthetic lethality in BRCA1/2-deficient tumor cells [5,6]. Previous studies have shown the effectiveness of olaparib in platinum-sensitive high-grade serous recurrent ovarian cancer (HSROC). Data from a Phase II trial to assess the efficacy and safety of olaparib maintenance monotherapy in platinum-sensitive HSROC patients, Study 19 (NCT00753545), showed a significant improvement in PFS in the olaparib-treated group relative to the placebo group (hazard ratio (HR) 0.35, 95% confidence interval (CI) 0.25–0.49; p < 0.0001) [3]. The Phase III SOLO2 (Study of OLaparib in Ovarian cancer) trial (NCT01874353) of olaparib tablets as maintenance monotherapy in patients with platinum-sensitive HSROC and a BRCA1/2 mutation (BRCAm) revealed significantly improved PFS in the olaparib-treated group compared to the placebo group (HR 0.30, 95% CI 0.22–0.41; p < 0.0001) [4].
In Korea, olaparib is approved for the maintenance treatment of patients with platinum-sensitive HSROC with BRCAm. The Korean Food and Drug Administration (KFDA) has permitted the use of olaparib in a maintenance setting based on the results of Study 19 since August 2015, and olaparib has been widely used clinically since January 2016—the date from which reimbursement for this treatment was initiated by the National Health Insurance Service of Korea.
Safety data from previous trials indicate that olaparib monotherapy is generally well tolerated by recurrent ovarian cancer patients [7,8]. This suggests that the long-term use of olaparib as maintenance monotherapy is a feasible option in recurrent ovarian cancer patients. However, the real-world effectiveness of olaparib could be different from its effectiveness in clinical trials because the patient population in the real world is an unselected, general clinical practice population that includes patients with less favorable prognostic factors than patients selected for clinical trials. Here, we present our real-world experience with olaparib in patients with HSROC with BRCAm treated at four major tertiary institutions in Korea.

This was a retrospectively reviewed observational study of Korean women with HSROC with BRCAm who were treated with olaparib maintenance therapy at four institutions in Korea (Samsung Medical Center, Yonsei University Severence Hospital, National Cancer Center, and Seoul National University Hospital) between January 2016 and December 2018. In general, eligibility criteria were designed to recruit a patient population similar to the one enrolled in Study 19. All patients older than 18 years with platinum-sensitive histologically confirmed HSROC with BRCAm were eligible if they had received at least two previous lines of platinum-based chemotherapy, were in objective response (either complete response or partial response) to their most recent regimen, and had platinum-sensitive disease following their penultimate line of chemotherapy. All patients were monitored until December 2018 for survival and discontinuation of olaparib. This study was approved by the institutional review boards of the participating centers in accordance with the Declaration of Helsinki and the International Conference on Harmonization Good Clinical Practice guidelines (IRB No., Samsung Medical Center 2018-11-156-001; Yonsei University Severence Hospital 4-2019-0440; National Cancer Center NCC2019-0002; Seoul National University Hospital H-1812-022-991).

Olaparib maintenance monotherapy (400 mg bid, capsule formulation) was administered orally and continued until disease progression if toxicities were manageable. Modification of olaparib dosage was performed at the clinicians’ discretion. Patients were advised to visit every month for prescriptions, symptom check-up, and laboratory tests (complete blood count with white blood cell differential counts, liver function test, renal function test, and CA-125) and every 3 months for tumor assessment (imaging studies, mostly computed tomography scan) until objective disease progression or intolerable toxicities. Safety and tolerability were assessed throughout the follow-up period by reviewing medical records of adverse events (AEs; graded using CTCAE v5.0), physical examination results, vital signs, and laboratory findings. Endpoints of this study were safety, tolerability, duration of, and reasons for discontinuing therapy and objective response, PFS, and overall survival (OS). PFS was defined as the interval between the day olaparib was started and the first radiologically documented progression of disease or last follow-up. OS was defined as the interval between the day olaparib started and death from any cause or last follow-up. Best overall response to olaparib maintenance was defined as the best response recorded from the start of treatment until disease progression/recurrence in patients with measurable or evaluable disease. Only patients with measurable disease and a PR at entry could achieve a best overall response of complete remission (CR) or partial remission (PR). Confirmation of response (CR or PR) was performed at the next scheduled response evaluation criteria in solid tumors (RECIST) assessment and ≥ 4 weeks following the date that the criteria for response were first met [9].

Between January 2016 and December 2018, 100 HSROC patients with BRCA1/2 mutation were treated with olaparib maintenance therapy at four institutions (44 patients from Samsung Medical Center, 25 from Yonsei University Severence Hospital, 19 from the National Cancer Center, and 12 from Seoul National University Hospital). Data cutoff for final analysis was December 2018; the median duration of follow-up was 10.2 months (range, 1.0–35.7 months).

At the median follow-up duration of 10.2 months (range, 1.0–35.7 months), 62 patients were still being treated with olaparib. Percentages for the number of olaparib users per total patients for different time periods are shown in Table 2. Sixty-two percent of patients (53/85) were using olaparib after 6 months, 53.5% (23/43) after 12 months, and 50.0% (4/8) after 24 months. Olaparib was discontinued due to disease progression in 34 patients (34.0%) and unacceptable toxicity in four (4.0%) (grade 3 neutropenia and associated complications in one patient, grade 4 anemia in one, grade 2 nausea/vomiting in one, and grade 3 soft tissue infection in one patient). Characteristics of the four long-term responders on olaparib maintenance are shown in Table S1. There were no significant differences in clinicopathological characteristics between long-term and non-long-term responders at this point.

In terms of best overall response to olaparib maintenance in 53 patients with measurable or evaluable disease (partial remission, PR) from most recent chemotherapy, complete remission (CR) was shown in 12 patients (22.6%), partial remission (PR) in four (7.5%), and stable disease in 33 (62.3%) (Table 2). Among the total of 100 patients, 37 recurrences (37.0%) and five deaths (5.0%) were observed during the follow-up period. Despite the short follow-up period, we derived Kaplan–Meier estimates of progression-free survival and overall survival from the start of olaparib maintenance therapy (Figure 1). Median PFS from the start of olaparib maintenance therapy was 14.6 months (95% CI 9.65~19.61), with a 24 month PFS of 42.4% (Figure 1A). Median OS was not reached, and 24 month OS was 82.1% from Kaplan–Meier estimates (Figure 1B). Additionally, characteristics of 37 patients with recurrence after olaparib maintenance therapy are shown in Table S2.

AEs are shown in Table 3. A total of 64 AEs (64.0%) comprising 37 hematological (37.0%) and 27 non-hematological (27.0%) adverse events were observed. The most common hematological AE was anemia (24.0%), while nausea/vomiting (13.0%) was the most common non-hematological AE. Twenty-five episodes of grade 3 or 4 AEs were documented: 14 cases (14.0%) of anemia, seven cases of neutropenia (7.0%), two cases of thrombocytopenia (2.0%), one case of oral mucositis (1.0%), and one case of soft tissue infection (1.0%). Only two cases with grade 3 or more non-hematologic AEs were observed. Dose reduction (DR) was performed in 41 cases (41.0%), and the drug was discontinued in eight (6.0%) cases. Continuation without dose modification was documented in 15 cases (15%). There were no cases with drug interruption. Median time to onset of the first AE was 1.9 months (range 0.1–8.8 months).
Time to first AE (event rate per patient-years) is shown in Figure 2. Patients mostly experienced AEs for the first time within a few months of the start of olaparib treatment, and it was rare for AEs to initially develop after 6 months on olaparib (Figure 2A). Anemia (Figure 2B) and nausea/vomiting (Figure 2C) showed a similar pattern to that of total AEs. Prevalence plots also showed early onset of AEs after olaparib treatment initiation (Figure 2D,E,F). The numbers of AEs with time to first event are shown in Figure S1. Forty-eight of 64 AEs (75.0%) occurred within the first 3 months from the start of olaparib treatment (Figure S1 A). AEs by grade with time to first event are shown in Figure S1 B. Hematologic and non-hematologic AEs had a similar pattern, with mostly early onset within 3 months of treatment initiation (70.3% and 81.5%, respectively) (Figure S1 C and D).
Information regarding 41 cases with dose reduction (DR) due to AEs is provided in Table 4. In 20 cases (48.8%), 25% DR was performed, while in the remaining 21 cases (51.2%), 50% DR was performed. In eight cases (19.5%), the dose was normalized after the AEs resolved, while dose reduction was maintained in 28 cases (68.3%). In five cases (12.2%), DR due to AEs led to discontinuation of olaparib. Median DR duration was 6.5 months (range 1.0–32.4 months).

In summary, results from this multi-institutional, retrospective, observational study indicate that olaparib maintenance treatment is both effective and safe for HSROC patients with BRCA1/2 mutation in a real-world clinical practice, as has been demonstrated in clinical trials. However, a longer follow-up period is needed for survival analysis. 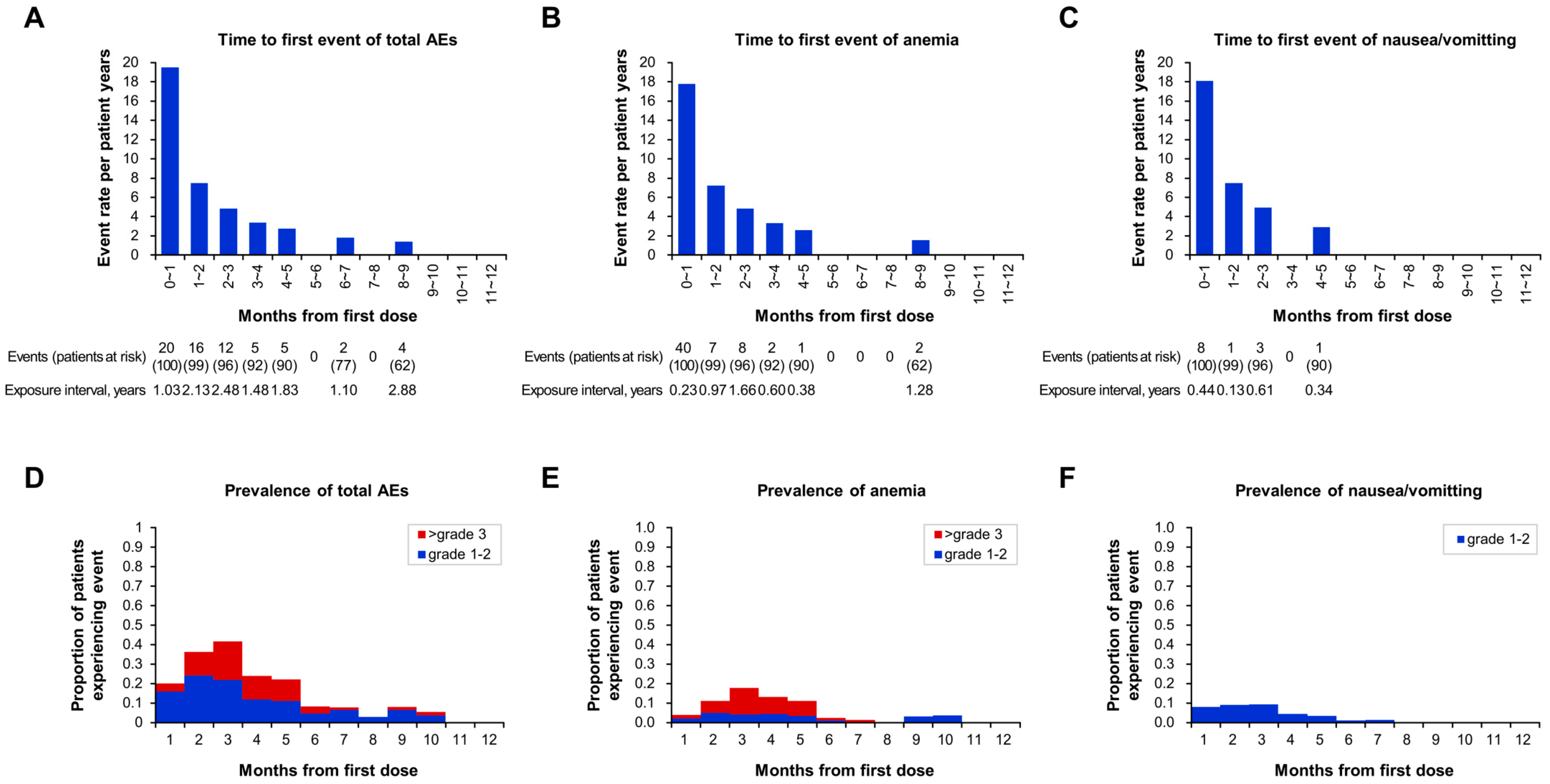 Table 4. Dose reduction (DR) pattern.
Table 4. Dose reduction (DR) pattern.
DR: dose reduction and AE: adverse event. Patients may have experienced more than one episode of adverse effect.
© 2019 by the authors. Licensee MDPI, Basel, Switzerland. This article is an open access article distributed under the terms and conditions of the Creative Commons Attribution (CC BY) license (http://creativecommons.org/licenses/by/4.0/).
We use cookies on our website to ensure you get the best experience. Read more about our cookies here.
Accept
We have just recently launched a new version of our website. Help us to further improve by taking part in this short 5 minute survey here. here.
Never show this again