Liver cancer is the sixth most commonly diagnosed cancer and the fourth leading cause of cancer death worldwide as of 2018. Hepatocellular carcinoma (HCC) comprises 75–85% of primary liver cancer cases [1]. The management of HCC depends on the tumor stage at diagnosis and liver function. Current management strategies involve resection, liver transplantation (LT), radiofrequency ablation (RFA), transarterial embolization (TAE)/transarterial chemoembolization (TACE), radiation therapy, or systemic therapy [2,3]. Patients are considered to have resectable tumors if they have one to three unilobar lesions with an upper limit of 5 cm for a single lesion and 3 cm for more than one lesion; no extrahepatic metastasis or macrovascular invasion; and little or no portal hypertension [2].
Hepatectomy is a potentially curative treatment for HCC, but the long-term prognosis remains unsatisfactory due to the high incidence of recurrence (50–60%) [4,5,6]. Prognostic factors for recurrence and survival after resection include tumor size, α-fetoprotein level, tumor differentiation, microvascular invasion, cirrhosis, surgical margin, and metabolic syndrome [6,7,8]. Recently, the associations between inflammatory markers and the prognosis of HCC have been actively explored, and systemic inflammation has been thought to be related to poor outcomes. The reason is that inflammatory responses play critical roles in tumorigenesis, including initiation, promotion, angiogenesis, invasion, and metastasis [9], and an inflammatory microenvironment is an important condition for tumors [10].
Systemic inflammatory responses have been investigated using markers such as the neutrophil-to-lymphocyte ratio (NLR) [11,12,13,14], platelet to lymphocyte ratio (PLR) [15,16,17], albumin and lymphocyte counts used in the prognostic nutritional index (PNI) [18,19,20], and neutrophil, lymphocyte, and platelet counts used in the systemic immune-inflammation index (SII) [21,22]. To date, most studies have evaluated only one of the inflammatory parameters. Therefore, a comprehensive evaluation of the prognostic values of the inflammatory markers would be valuable for patients with HCC. The aim of this study is to evaluate the effects of inflammatory markers to predict recurrence and survival in HCC patients who have Barcelona Clinic Liver Cancer (BCLC) grades 0–A and are receiving hepatectomy.

The study protocol was approved by the institutional review board and the ethics committee of Chang Gung Memorial Hospital (201901103B0). The ethics committee waived the requirement for informed consent for this study, and all the data were analyzed anonymously.

This retrospective study enrolled patients with newly diagnosed HCC who underwent surgical intervention between January 2001 and June 2016 at Kaohsiung Chung-Gung Memorial Hospital. HCC was diagnosed based on histological evidence or classical imaging features according to the guidelines of the American Association for the Study of the Liver [23]. The staging of tumors was determined according to the BCLC staging classification [24]. Patients who had RFA or TAE before resection, LT after resection, or BCLC stage B or C were excluded from the study (Figure 1). Surgical resection for tumors in BCLC stage 0 or A is the widely accepted standard treatment. However, surgical treatment for BCLC stage B or C HCC remains controversial. Recently, the management of HCC has tended to involve a multidisciplinary approach, such as RFA or TACE combined with surgery, etc. Because RFA and TACE are associated with the induction of inflammation and immunological responses, it might have some degree of influence on inflammatory indicators. Hence, only treatment-naïve HCC patients were enrolled in our study. LT was believed to cure both the tumor and the underlying cirrhosis at the same time in well-selected patients, which also have an influence on the survival. Therefore, those who received salvage LT were excluded [25].

Patient demographics and clinical characteristics were obtained from the reviewed medical records, including complete blood counts, albumin, α-fetoprotein level, Child–Turcotte–Pugh (CTP) class, date of diagnosis, status of viral hepatitis, tumor staging by BCLC, duration of follow-up, and outcomes. Blood tests were taken within 1 week before operation. NLR was calculated by dividing the absolute neutrophil count by the lymphocyte count, and PLR was obtained by dividing the platelet count by the lymphocyte count. PNI was calculated using the following equation: lymphocyte count (/μL) × 0.005 + albumin (g/dL) × 10. SII was measured as platelet count × neutrophil count/lymphocyte count (/μL) [26]. Recurrence-free survival (RFS) was defined as the period from tumor removal by resection until the detection of recurrent or metastatic disease. Overall survival (OS) was defined as the time from the diagnosis to death, last contact, or 28 February 2017.

This study was supported by grants from Chang Gung Memorial Hospital (Grant numbers: CMRPG8F1671 and CMRPG890161)

There are no conflicts of interest to disclose for all authors. 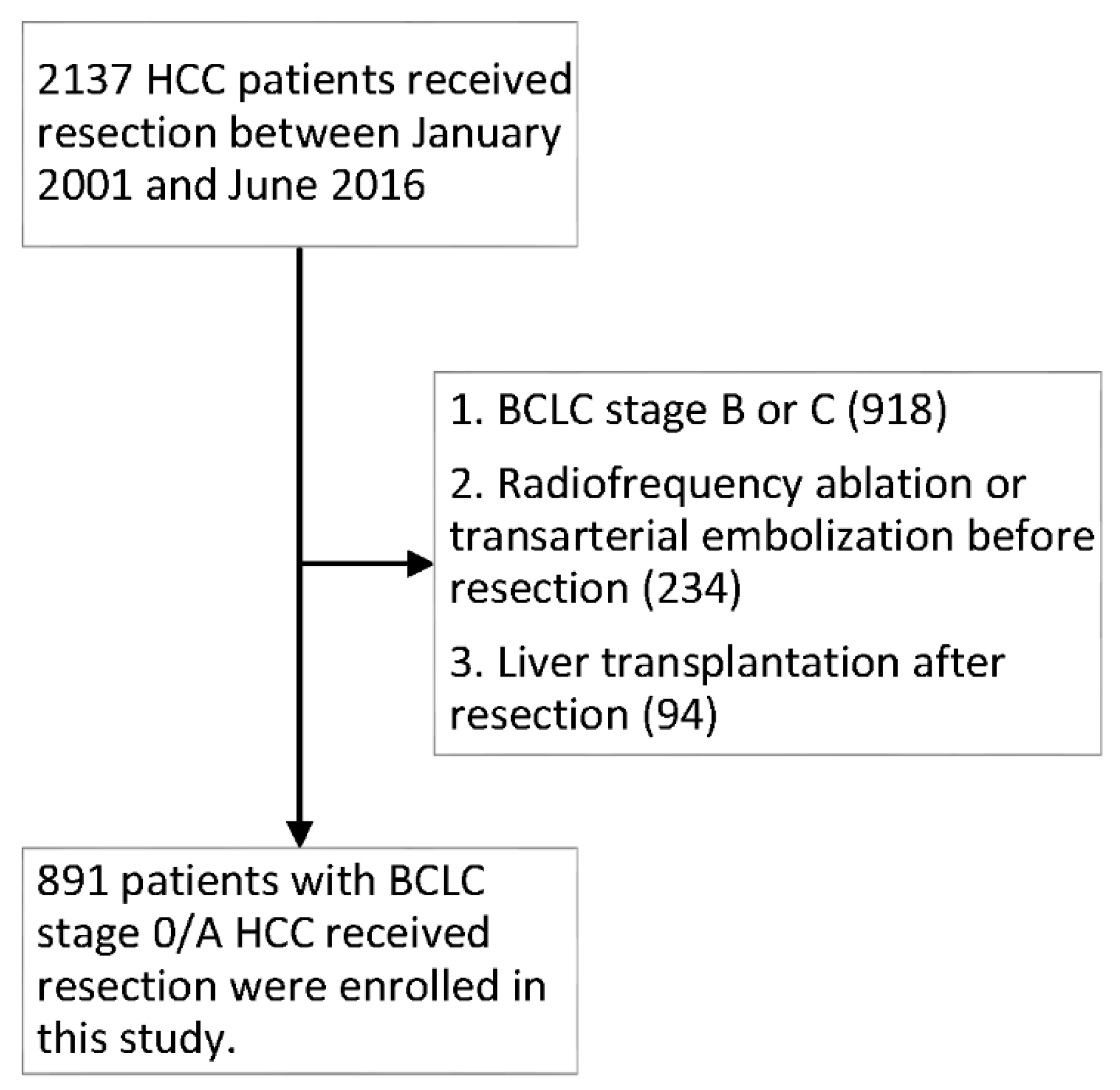 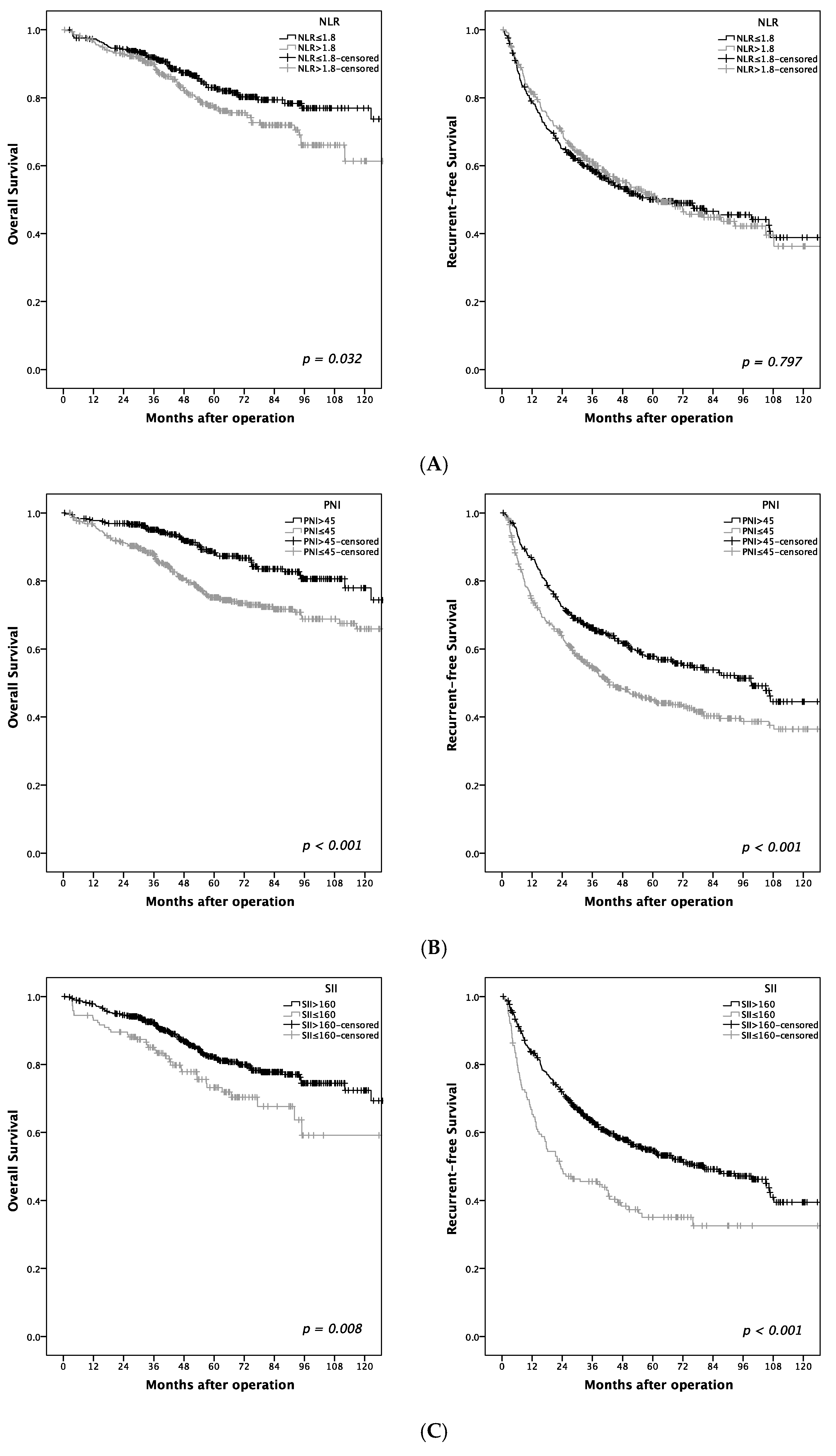 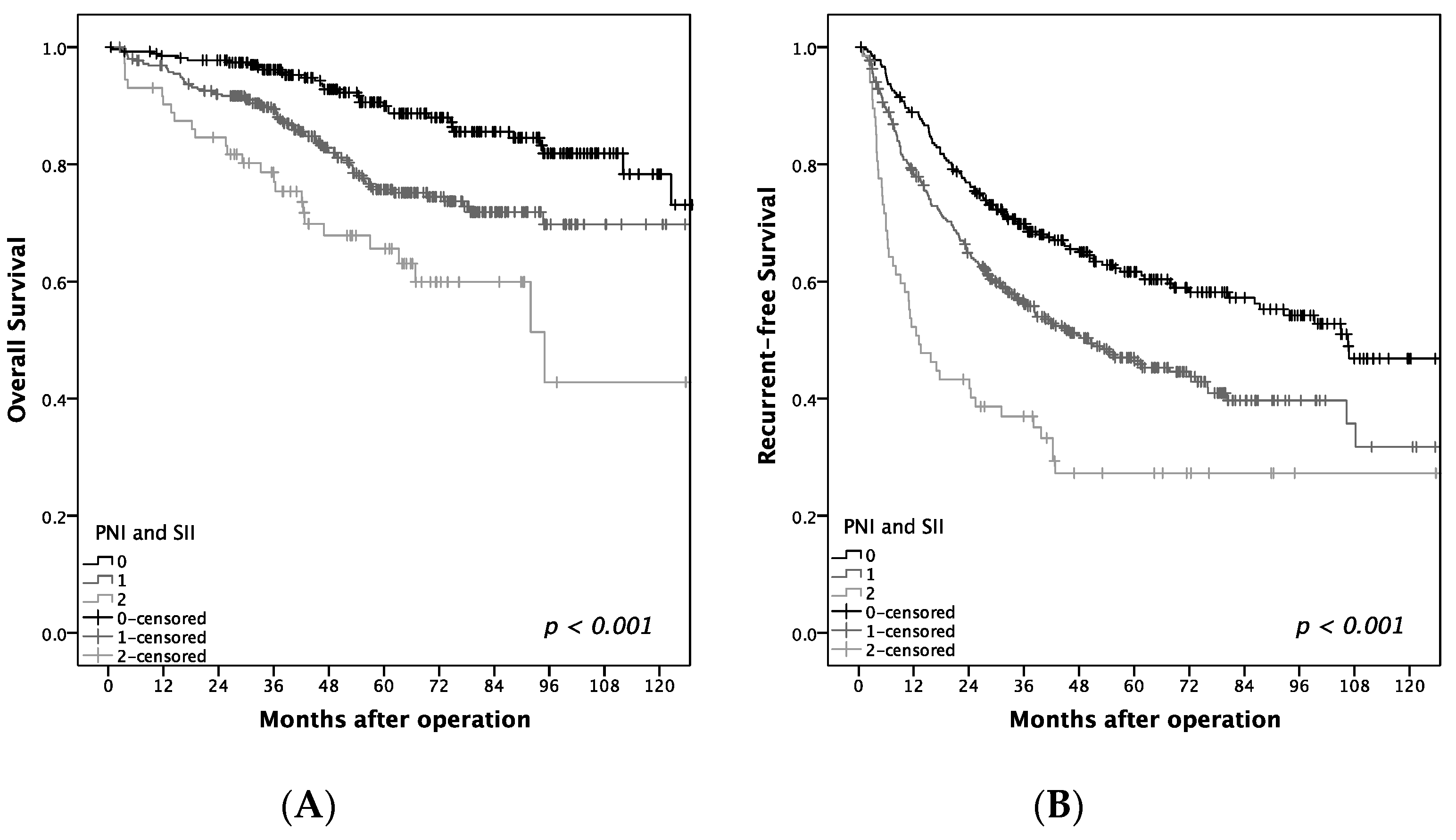