Has The Time Arrived to Refine The Indications of Immunosuppressive Therapy and Prognosis in IgA Nephropathy?

Hypertension is the leading risk factor for premature death worldwide. The identification of modifiable causes of hypertension remains an imperative task. We aimed to investigate associations between 79 proteins implicated in cardiovascular disease and longitudinal blood pressure (BP) changes in three Swedish prospective cohorts. In a discovery phase, we investigated associations between baseline circulating protein levels assessed with a proximity extension assay and BP stage progression at follow-up 5 years later among persons without BP-lowering drugs at baseline in two independent community-based cohorts from the Prospective Investigation of the Vasculature in Uppsala Seniors study (PIVUS) and the Uppsala Longitudinal Study of Adult Men (ULSAM). We used an independent cohort, the Malmö Diet and Cancer Study (MDC), for replication. The primary outcome of BP stage progression was defined as per the 2017 AHA/ACC (American Heart Association/ American College of Cardiology) Guideline BP categories. We also investigated associations of protein levels with changes in BP on a continuous scale, and meta-analyzed all three cohorts. Levels of renin were associated with BP stage progression with a 5% false discovery rate (FDR) in the ULSAM (n = 238) and PIVUS (n = 566) cohorts, but we could not replicate this association in the MDC cohort (n = 2659). The association in the discovery cohorts was modest, with an odds ratio for BP stage progression over 5 years of 1.33 (95% confidence interval 1.14 to 1.56) per standard deviation of baseline renin. In conclusion, we could not find any novel robust associations with longitudinal BP increase in a proximity extension assay-based proteomics investigation in three cohorts. View Full-Text
Keywords: proteomics; blood pressure; hypertension; prospective cohort proteomics; blood pressure; hypertension; prospective cohort
►▼ Show Figures 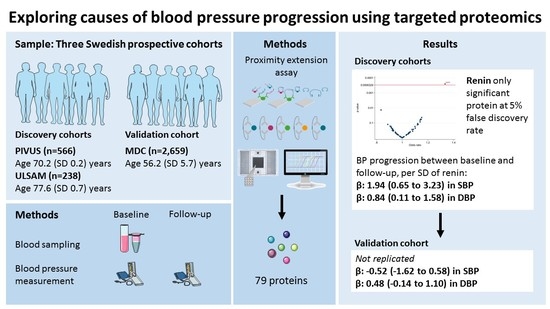