The Prognostic Value of Soluble ST2 in Adults with Pulmonary Hypertension

Soluble ST2 (sST2) is upregulated in response to myocardial stress and may serve as biomarker in adults with pulmonary hypertension (PH). This prospective cohort study investigated sST2 levels and its association with echocardiographic and hemodynamic measures, and adverse clinical outcomes in adults with PH of different etiologies. sST2 was measured during the diagnostic right heart catheterization for PH, in adult patients enrolled between May 2012 and October 2016. PH due to left heart failure was excluded. The association between sST2 and a primary endpoint composed of death or lung transplantation and a secondary composite endpoint including death, lung transplantation or heart failure, was investigated using Cox regression with adjustment for NT-proBNP. In total 104 patients were included (median age was 59 years, 66% woman, 51% pulmonary arterial hypertension). Median sST2 was 28 [IQR 20–46] ng/mL. Higher sST2 was associated with worse right ventricular dysfunction and higher mean pulmonary and right atrial pressures. Median follow-up was 3.3 [IQR 2.3–4.6] years. The primary and secondary endpoint occurred in 33 (31.7%) and 43 (41.3%) patients, respectively. sST2 was significantly associated with both endpoints (HR per 2-fold higher value 1.53, 95%CI 1.12–2.07, p = 0.007 and 1.45, 95%CI 1.10–1.90, p = 0.008, respectively). However, after adjustment for NT-proBNP, both associations did not reach statistical significance. In conclusions, higher sST2 levels are associated with more severe PH and right ventricular dysfunction and yields prognostic value in adults with PH, although not independently of NT-proBNP. View Full-Text
Keywords: ST2; pulmonary hypertension; biomarkers ST2; pulmonary hypertension; biomarkers
►▼ Show Figures 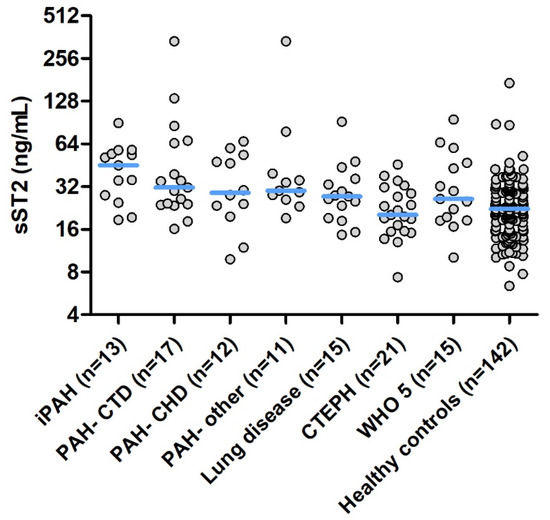