The Effect of Gamification through a Virtual Reality on Preoperative Anxiety in Pediatric Patients Undergoing General Anesthesia: A Prospective, Randomized, and Controlled Trial

Leonardo A. Sechi
1 and

Carotid artery stenting (CAS) is a minimal invasive procedure used to resolve carotid occlusion that can be affected by peri-procedural complications. Statin use before CAS has shown to reduce peri-procedural risk and improve survival, though time-dependent cofactors that influence mortality has not been considered. The aim of this study was to evaluate long-term survival of patients who undergo CAS considering new occurred major adverse cardiovascular event (MACE) as time-dependent cofactor. In this study, 171 high cardiovascular risk patients (age 72 ± 8 years, 125 males) were enrolled after CAS procedure and were followed for a median of 8.4 years. Death occurred in 44% of patients with a mean time to death of 69 ± 39 months and MACE in 34% with a mean time of 35 ± 42 months. In patients who used or not statins at baseline, death occurred in 33% and 65%, respectively (p < 0.001). Survival analysis showed that statin use reduced risk of death (hazard ratio HR 0.36, 95% confidence interval CI 0.23–0.58, p < 0.0001). Including MACE as time-dependent variable did not change beneficial effects of statins. Additionally, statin use was associated with a protective effect on MACE (HR 0.48, 95% CI 0.27–0.85, p = 0.012); particularly, the prevalence of stroke was reduced by 59% (p = 0.018). In multivariate analysis, effects of statins were independent of demographic and anthropometric variables, prevalence of cardiovascular risk factors, renal function, antiplatelet use, and MACE occurrence. In conclusion, use of statins before CAS procedure is associated with increased long-term survival and reduced MACE occurrence. This evidence supports the hypothesis that statin use before CAS might be beneficial in high risk patients. View Full-Text
Keywords: statins; atherosclerosis; carotid artery stenting; mortality; cardiovascular event statins; atherosclerosis; carotid artery stenting; mortality; cardiovascular event
►▼ Show Figures 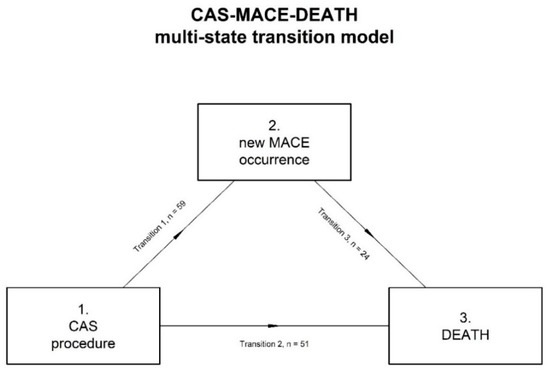