Nutcracker Syndrome in Children: Role of Doppler Ultrasonographic Indices in Detecting the Pattern of Symptoms

Article
Contingency Contracts for Weight Gain of Patients with Anorexia Nervosa in Inpatient Therapy: Practice Styles of Specialized Centers
by

According to the Diagnostic and Statistical Manual of Mental Disorders (DSM-5), anorexia nervosa (AN) is a mental disorder characterized by an intense fear of gaining weight and body image disturbances that lead to restricted food intake relative to the required food intake (restrictive subtype) or other behaviors promoting weight loss such as excessive exercising or purging behavior (binge-purge subtype) [1]. Despite a twelve-month prevalence rate of 0.8% within the German population, AN is one of the mental disorders with the highest mortality [2,3,4]. In the long term, only approximately half of patients completely recover, whereas roughly 20 percent develop a chronic form of the disorder [5,6]. It takes an average of five to six years to achieve complete recovery [2]. This reflects the challenges associated with treatment, resulting from a high degree of ambivalence towards recovery and weight gain patients with AN often express [7,8].
According to German treatment recommendations, patients with severe AN (Body Mass Index (BMI) < 15) are treated in inpatient settings that regard weight restoration as one of the focal points for recovery [9]. Initial weight gain and symptom-orientation have been shown to predict good outcomes [10,11]. Nonetheless, a study by Schlegl and colleagues suggests that about one third of patients with AN do not show a significant response to intensive inpatient treatment [12]. Thus, there is still room for improvement in inpatient treatment approaches for patients with AN [13].
One indispensable part of the multimodal treatment approach for patients with AN is the utilization of a treatment contract, which is implemented to induce motivation for weight gain. Treatment contracts are currently routinely used in the inpatient treatment of patients with AN in Germany [14,15,16,17]. They are verbal or written agreements with the patient that contain mostly, but not exclusively, weight goals. Frequently, they outline the amount of weight that should be gained in a defined period of time during the inpatient stay (e.g., each week). Positive consequences for reaching these weight goals and negative consequences for not fulfilling weight goals are determined. Treatment contracts to induce weight gain in patients with AN can also be called weight contracts or contingency contracts for weight gain.
A recent systematic review by our group showed that despite their routine usage in inpatient treatment, contingency contracts for weight gain are an understudied topic and the empirical evidence base is scarce [18]. The majority of publications included in our review were of rather historical nature with few current contributions. We could, however, identify a development from restrictive applications of treatment contracts, e.g., in the form of bed rest to more collaborative approaches. These collaborative approaches try to actively involve patients into the contingency contracting process, e.g., by negotiating terms of the contract or letting patients choose consequences.
In terms of clinical application, there is some guidance in available treatment manuals for AN [15,19] with written examples of contracts. However, this guidance seems to stem from clinical expertise which is valuable but not sufficient to ensure high treatment standards. Currently, it is unclear whether treatment manuals are used and if done so, how the contingency contract process is organized in German eating disorder centers.
The main aim of the present study is to assess and analyze the utilization of contingency contracts for weight gain in German university hospitals specializing in eating disorders by means of a survey. Current approaches used by these specialized centers for collaboration with the patient are investigated, as well as strategies to enhance the patients’ autonomy and motivation in the treatment contract process. Experiences of mental health professionals during the treatment contract process are also described. Finally, as an exploratory question, the role of professional characteristics in the contingency contract process is examined.

Twelve specialized university hospital centers in Germany were invited and participated in this multicenter study. Mental health professionals who are currently or were formerly treating patients with AN in an inpatient setting were eligible for participation.

Means, standard deviations and percentages are reported for sample descriptions. Since variables were mostly not normally distributed, Mann–Whitney U tests for the analyses of single differences of means were used. To analyze potential associations between variables, Spearman rho correlations are reported. All statistical analyses were performed using IBM SPSS Statistics version 24 (IBM Corporation, Armonk, NY, USA). The level of significance for all analyses was set at α = 0.05.

3.6. Overall Effectiveness and Factors of Success from the Experts’ Points of View

3.7. Emotions Experienced by the Experts during the Contingency Contract Negotiation and Emotional Burden

On average, experts rated the overall significance of contingency contracts for the inpatient treatment of patients with AN as ‘significant for the most part’ to ‘very significant’ (M = 6.27, SD = 1.00). They reported on not experiencing the contingency contract process (preparation, negotiation and conclusion) as emotionally straining (M = 3.95, SD = 1.65), however there was a significant correlation between experiencing emotional strain and the amount of clinical work experience in years of rs = −0.355, p = 0.002. This indicates that when clinical work experience increases, emotional strain during the contingency contract process decreases.
Experts reported mainly experiencing a sense of responsibility (M = 5.20, SD = 1.09), compassion (M = 4.80, SD = 1.09) and strain (M = 4.54, SD = 1.20) during the negotiation of contingency contracts. Other emotions (tension, relaxation, ambivalence, frustration, anger and rejection) were reported as being experienced ‘rarely’ to ‘occasionally’.

This study analyzed characteristics, utilization and appraisal of contingency contracts for weight gain in AN in German university hospitals specializing in the treatment of eating disorders. Experts were asked about their preparation, negotiation, conclusion and revisions of contingency contracts for patients with AN, their overall rating of effectiveness, as well as experienced emotions and possible emotional strain during this process.

The three major aspects, in which participating institutions differ, are their definitions of weight goals, when and how contingency contracts are revisited and the choice of consequences. The definition of weight goals and the revisiting of contingency contracts possibly reflect the different self-developed manuals of the eating disorder centers. One half of experts negotiate weight goals with the patient, also taking aspects such as planned duration of stay into consideration. Another 40% orientate themselves toward a BMI value that should be achieved (low normal). One possible explanation for different BMI goals, ranging between 17 and 19 kg/m2, is the continued discussion surrounding which BMI cut-off should be used to indicate non-anorectic weight for patients with AN [1,21].
Herzog and colleagues [22] showed that lower weekly weight goals (500 g) led to a higher achieved weight at the end of treatment, compared to higher weekly weight goals (750 g). In contrast, there are studies showing that higher weekly caloric intake led to higher overall weight gain (e.g., [23]). A recent systematic review [24] demonstrated that higher calorie refeeding is not associated with increased risk of the refeeding syndrome, at least for mildly and moderately affected patients. However, inpatient therapy is mainly indicated for severely ill patients and caution regarding caloric intake in the first days of treatment should be applied. Hence, for severely malnourished patients, there is no evidence to change current approaches. However, the long-term impact of different approaches is unknown [24], therefore no clear recommendation can be made from the literature concerning what (weekly) weight goals or BMI goals should be set [9].

One of the aims of the current study was to identify approaches to incorporate patients into the contingency contract process in order to motivate them and enhance compliance and autonomy. In concrete terms, patients (and parents for younger patients) can for example co-determine weight goals, choose consequences and write down the contingency contract in their own words. We found that about 30% of experts let their patients choose consequences or negotiate consequences with the patient and almost half of the experts negotiate weight goals with their patients. This seems promising especially considering that patients are often ambivalent to restore weight [25]. However, letting patients co-determine weight goals can bare the risk of setting weight goals that are too small. Additionally, negotiating weight goals and weight contingencies with the patient instead of setting them oneself can be a wearisome task for the therapist.
In the literature covering the topic of collaboration in the field of AN, there is a clear preference for collaborative approaches by patients as well as therapists [26]. Furthermore, Williams and Reid [25] showed in their qualitative study that patients with AN feel low self-efficacy about changing behaviors. On one side, AN gives them a sense of control, but the disorder also causes strong feelings of loss of control. The authors conclude that this ambivalence patients experience should be targeted in a collaborative manner [25]. In line with this evidence and the systematic review, which shows an overall movement from the utilization of (directive) contingency management towards more collaborative contingency contracts [18], contingency contracts in Germany should intensify their focus on collaboration within the weight contract process.

Motivational aspects are one of the main considerations for the improvement of treatment and care for patients with AN [27] and are taken into consideration for example by integrating motivation-based therapeutic styles into treatment [28,29]. Motivation of patients has been shown to play an essential role concerning dropout rates and treatment compliance [30]. Furthermore, internal motivation to change was identified as one of the positive predictors of clinically significant changes in eating disorder psychopathology in patients with AN quantitatively [12] as well as qualitatively in patients’ reports [31]. It is therefore worth considering a shift in the treatment approach, from motivating the patients externally through a contingency contract, to enhancing internal motivation for example by incorporating a motivations-based treatment style. Indeed, some of the authors are currently developing a motivation-based intervention, incorporating motivational aspects into the inpatient treatment of patients with AN, which they plan to soon test against existing treatment options.

4.5. Experiences of Experts with the Contingency Contract Process

Although there was great variation in emotions experienced by the participating experts during the contingency contract process, on average there was no extremely negative or positive emotions which evidently accompanied this process. Additionally, it could be shown that the emotional burden for experts decreased with the years of experience, which coincides with clinical impressions. We found no significant differences between occupational groups (physician versus psychologist) or therapeutic orientation (behavioral versus psychodynamic psychotherapy). It would be interesting, however, to also investigate the emotional experiences of nurses and other caregivers in the inpatient environment.

The main limitation of the study is its descriptive nature; as no causal conclusions about the reported associations and group differences can be drawn. Furthermore, only specialized university centers were included which heightened the risk of a selection/recruitment bias. Although a fair amount of specialized university centers in Germany participated, not all could be included, raising the question of representativeness. However, given that this is the first study attempting to describe the contingency contract process in specialized centers in Germany, this account provides a valuable contribution to the evidence base.
The usefulness of contingency contracting practice styles for patients with AN in other countries would also be of high interest. Taking into account that patients in other countries might be treated in outpatient or day-patient settings more frequently, it might be more difficult to track positive and negative consequences. However, this would also entail the chance for greater collaboration between patients and therapists, potentially lessening the chance of patients fearing ‘to be controlled’ and enabling them to gain more autonomy. There are some reports about the utilization of contingency contracts around the world [18], however to the best of our knowledge, studies about practice styles that go beyond the treatment program of one specific clinic, are missing. 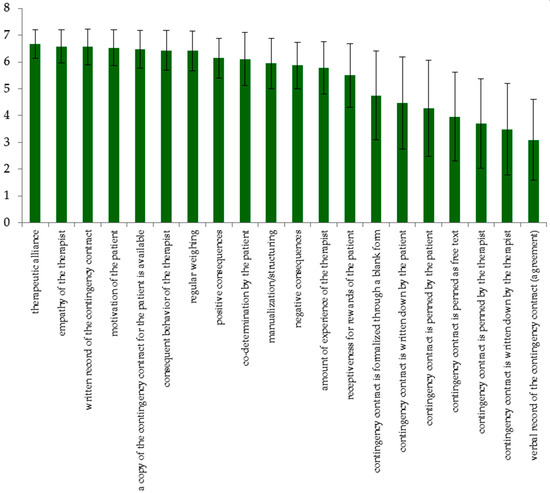 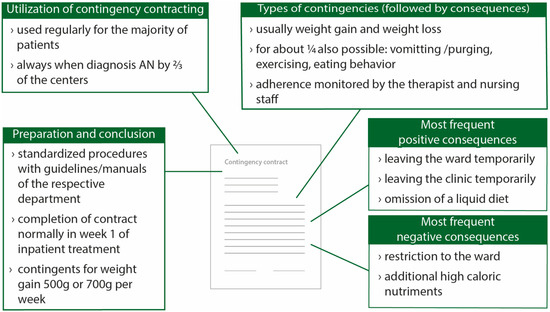 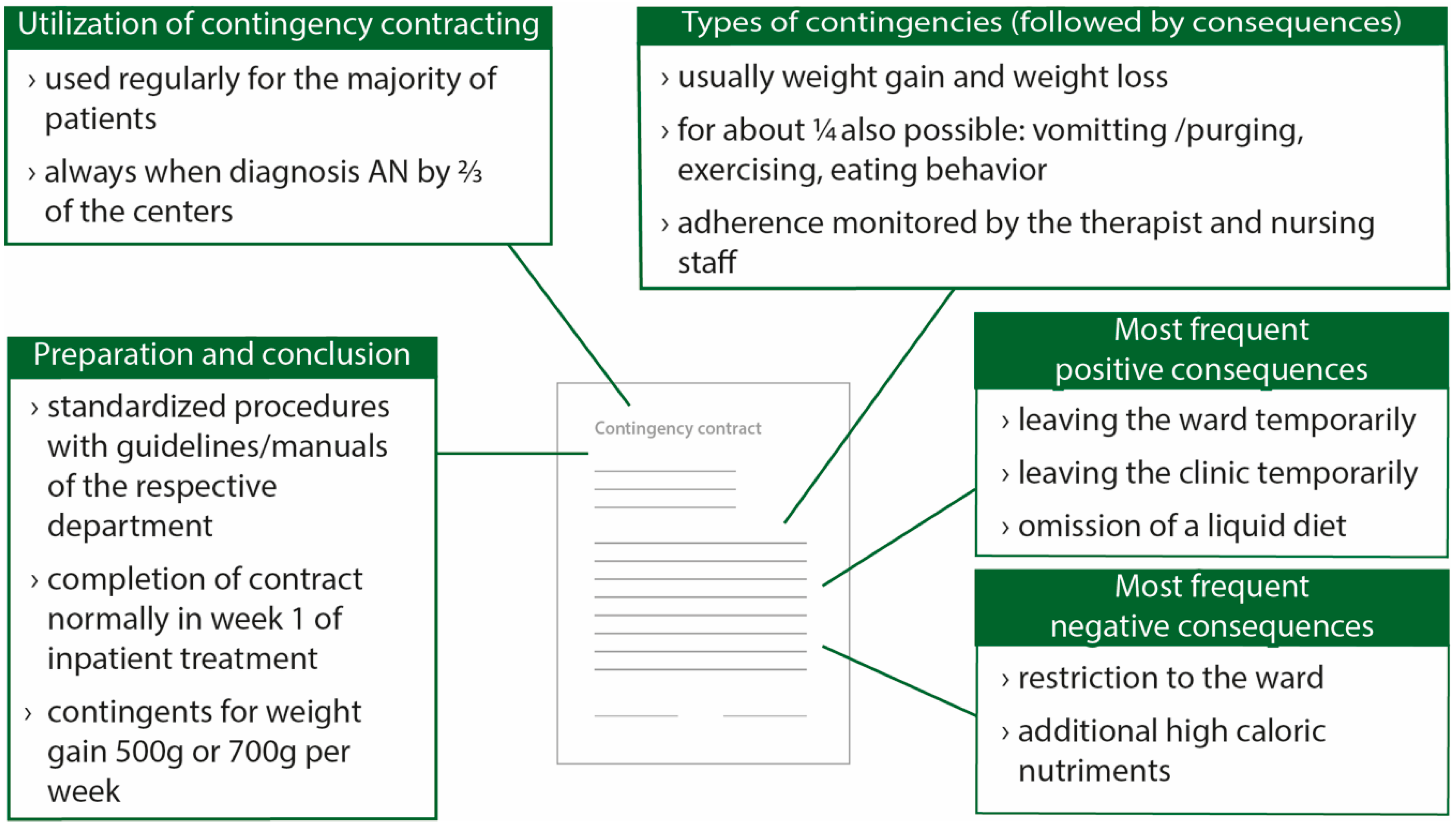