Colovaginal and/or rectovaginal fistulas cause significant and distressing symptoms, including vaginitis, passage of flatus/feces through the vagina, and painful skin excoriation. These fistulas can be a challenging condition to treat. Although most fistulas can be treated with surgical repair, for those patients who are not operative candidates, limited options remain. As minimally-invasive interventional techniques have evolved, the possibility of fistula occlusion has enriched the therapeutic armamentarium for the treatment of these complex patients. In order to offer optimal treatment options to these patients, it is important to understand the imaging and anatomical features which may appropriately guide the surgeon and/or interventional radiologist during pre-procedural planning.
Keywords: colorectal-vaginal fistula; fistula; percutaneous fistula repair colorectal-vaginal fistula; fistula; percutaneous fistula repair

Surgical correction of colovaginal and rectovaginal fistulas requires an understanding of the size, location, and etiology of the fistula. These factors allow the surgeon to counsel the patient as to the best approach to treatment, and the expected success following surgery. In reproductive-age women, the most common etiology for rectovaginal fistulas is obstetrical trauma, which physically would be identified low in the vaginal canal. In older women, fistula formation is usually due to an inflammatory process, such as diverticulitis or Crohn’s disease. Identifying the exact location of the fistula, which can be identified on imaging, is critical in order to decide the approach to surgery, whether it be transvaginal or transabdominal.

An abdominal approach to rectovaginal and colovaginal fistula repair is considered if there is underlying colon pathology that needs to be addressed, if a diverting stoma is needed, or if the fistula is too high to reach vaginally for adequate exposure. The most likely scenario of a high colovaginal fistula is in an older patient with prior diverticular disease. These fistulas can often be visualized on pelvic examination in the left apex of the vagina, and symptoms include the passing of flatus or fecal material through the vagina. If a prior hysterectomy has been performed, involvement of the bladder or urinary tract should be ruled out, either by direct visualization with a cystoscopy, or by imaging. The concomitant onset of bladder symptoms can suggest the involvement of the urinary tract. Symptoms may include pneumaturia, recurrent urinary tract infections, and increased urinary frequency.
Preoperatively, an enema may be performed to empty the lower colon, however full bowel preparation is not necessary. We utilize the enhanced recovery protocol for all patients undergoing abdominal surgery [25]. The preferred surgical approach to abdominal fistula repair is a minimally invasive one, using robotic-assisted laparoscopy. If there is underlying colon pathology, such as diverticulitis or prior pelvic radiation, a bowel resection with primary anastomosis may be necessary. In cases of radiation, a diverting stoma should also be performed due to a higher risk of anastomotic leak. In this scenario, the sigmoid colon is mobilized along the retrorectal space distal to the fistula site. Once the fistulous tract is identified, the distal end of the colon is mobilized and stapled circumferentially. A colpotomy is performed and the diseased colonic segment removed, either through the colpotomy, or through an extended umbilical incision. An end-to-end primary anastomosis is then performed with a circular stapler. The colpotomy is closed using a delayed absorbable suture. An omental flap can be mobilized and interposed between the rectal anastomosis and the vagina.
If the fistula is iatrogenic due to gynecologic surgery, bowel resection may not be necessary. In this scenario, the rectovaginal space is carefully opened until the fistulous tract is identified (Figure 5). The tract is excised until healthy vaginal and rectal tissue is identified. A discoid excision of the rectum is thus performed and primarily closed, using a delayed absorbable suture, in a multilayer fashion. The colpotomy is also closed with a delayed absorbable suture. An omental flap can be interposed in the rectovaginal space with the omentum sutured distal to the colpotomy and rectotomy sites.
The appropriate anatomical identification of the fistula is crucial in order to determine the extent of the surgery, and to be able to counsel the patient as to the best surgical approach to be taken.

Percutaneous interventional techniques are continuously evolving, and provide a new armamentarium for patients with fistulas who are deemed not to be surgical candidates. Although surgical options exist, including resection with primary anastomosis, resection with diversion, or diversion alone, a select group of patients may not be operative candidates due to other medical comorbidities. Endoscopic endoluminal stenting has been considered as an alternative option, as covered stents can effectively palliate the symptoms by secluding the vagina from the colon [26]. For complex surgical patients, new technologies are being designed so that percutaneous interventional methods can be used to offer hope and an improved quality of life for these patients.
In the literature pertaining to interventional radiology, enterocutaneous fistulas have been closed using the Biodesign Fistula Plug (Cook, Inc., Bloomington, IN, USA), however this plug has limited sizes, and may not be adequate for closing large vaginal fistulas. Thus far in the literature, there are only a handful of reports which have used the AMPLATZER occluder device (AVP; St. Jude Medical, Inc. St. Paul, MN, USA) for closure of rectovaginal fistulas (Figure 6) [27,28]. These reports offer future promise for adapting current interventional devices and/or designing new technologies. In the first case report, Kilickesmez used the AVP for treating a rectovaginal fistula, which occurred following a low anterior resection for rectal cancer. Prior surgical interventions, namely diversion colostomy and primary surgical repair were both unsuccessful. An AVP 2 (AVP; St.Jude Medical, Inc. St. Paul, MN, USA) was used to occlude the fistula, and was deployed percutaneously through the vaginal lumen. Although initially successful in this case, long-term success was not achieved, likely attributable to contractile forces within this area [27]. Lee et al. designed their own fistula plug for the occlusion of rectovaginal fistulas, consisting of a cloverleaf-configurated disk with a nitinol frame [20]. They placed this device transvaginally in seven patients with either radiation induced or surgically induced fistulas, achieving good outcomes, even up to 26 months following the procedure. In a more recent article, the AMPLATZER plug was used to create an occlusive barrier across a carcinoid mucinous tumor-vaginal fistula, with good short-term outcomes.
Given the successful short-term outcome, a second patient was referred for the closure of a complex colovaginal fistula resulting from invasive vaginal malignancy and prior surgical intervention. The patient was deemed not to be a candidate for operative repair. The patient had such a significantly poor quality of life that percutaneous closure of the fistula was attempted (Figure 7).
The patient did well in the short term, having a significant decrease in vaginal output, and an improved quality of life. Furthermore, follow-up imaging demonstrated that the occluder plugs were in the appropriate position.

Vaginal fistulas are rare complications resulting from various disease processes or surgical interventions. However, they can and should be treated in order to dissipate distressing symptoms in women. The majority of these women can be treated through surgical intervention, using the treatment approaches described above. However, for those women who are not surgical candidates, and who experience a significantly reduced quality of life as a result of these fistulas, endovascular interventions can be applied. Although a promising treatment option, long-term follow-up is needed for these patients in order to ensure the long-term occlusion of the fistulas.

No sources of funding were used for this review article. 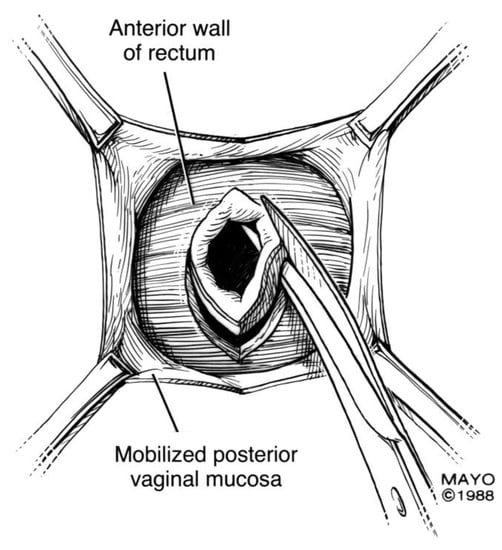 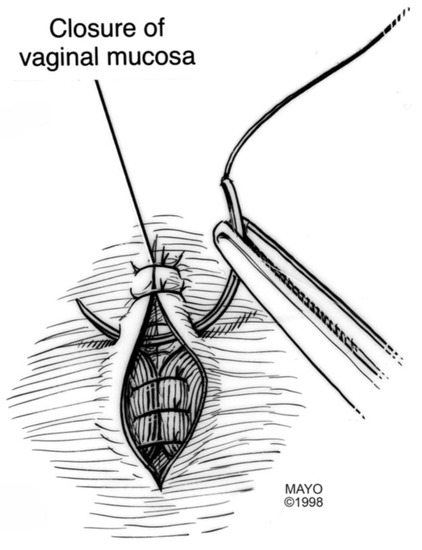 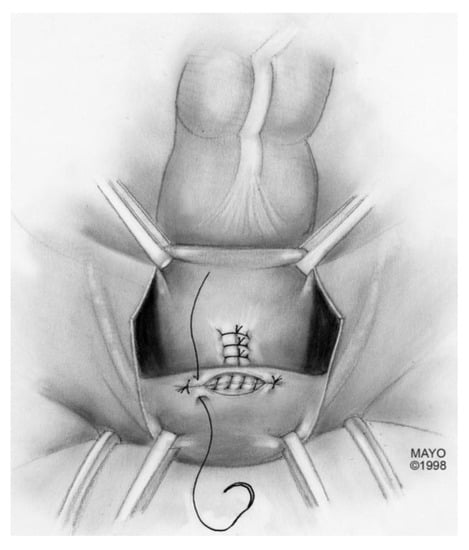