Bruton’s tyrosine kinase (BTK) is a critical terminal enzyme in the B-cell antigen receptor (BCR) pathway. BTK activation has been implicated in the pathogenesis of certain B-cell malignancies. Targeting this pathway has emerged as a novel target in B-cell malignancies, of which ibrutinib is the first-in-class agent. A few other BTK inhibitors (BTKi) are also under development (e.g., acalabrutinib). While the predominant action of BTKi is the blockade of B-cell receptor pathway within malignant B-cells, increasing the knowledge of off-target effects as well as a potential role for B-cells in proliferation of solid malignancies is expanding the indication of BTKi into non-hematological malignancies. In addition to the expansion of the role of BTKi monotherapy, combination therapy strategies utilizing ibrutinib with established regimens and combination with modern immunotherapy compounds are being explored. View Full-Text
Keywords: ibrutinib; Bruton’s tyrosine kinase; solid tumors ibrutinib; Bruton’s tyrosine kinase; solid tumors
►▼ Show Figures 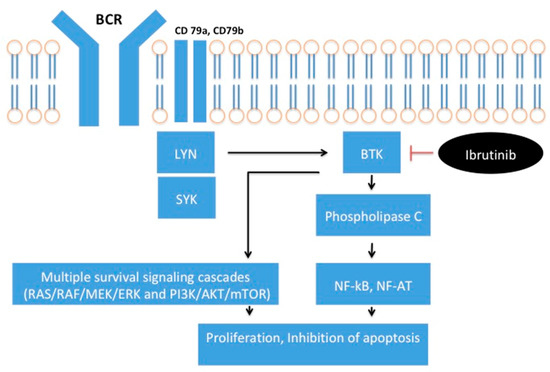