Trans-active response DNA-binding protein (TDP-43) is a multifunctional regulatory protein, whose abnormal deposition in neurons was linked to debilitating neurodegenerative diseases, such as amyotrophic lateral sclerosis, frontotemporal lobar degeneration, Limbic-predominant age-related TDP-43 encephalopathy, and Alzheimer’s disease with a secondary pathology. Several reports showed that TDP-43 proteinopathy as a comorbidity can form aggregates with other pathological proteins. The co-deposition of alpha synuclein and TDP-43 inclusions was previously reported in glial cells and by observing TDP-43 proteinopathy in Lewy body disease. In this study, it was hypothesized that alpha synuclein and TDP-43 may co-aggregate, resulting in comorbid synucleinopathy and TDP-43 proteinopathy. A solid-phase microplate-based immunoassay was used to map out the epitopes of anti-TDP-43 antibodies and locate the interaction of TDP-43 with α-synuclein. A region of the low complexity domain of TDP-43 (aa 311–314) was shown to interact with full-length α-synuclein. Conversely, full-length TDP-43 was shown to bind to the non-amyloid beta component of α-synuclein. Using in silico sequence-based prediction, the affinity and dissociation constant of full-length TDP-43 and α-synuclein were calculated to be −10.83 kcal/mol and 1.13 × 10−8, respectively. Taken together, this microplate-based method is convenient, economical, and rapid in locating antibody epitopes as well as interaction sites of two proteins. View Full-Text
Keywords: epitope mapping; TDP-43; alpha synuclein; ELISA; comorbidity; proteinopathy; aggregation epitope mapping; TDP-43; alpha synuclein; ELISA; comorbidity; proteinopathy; aggregation
►▼ Show Figures 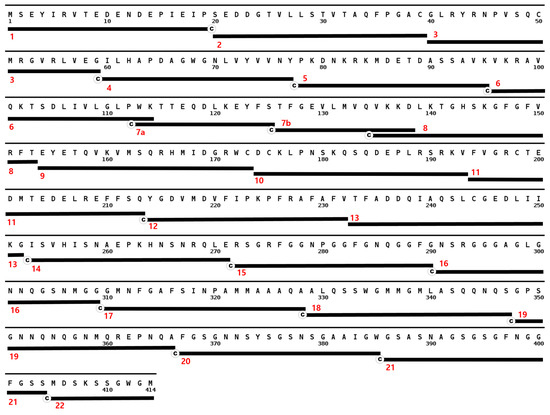