Treatment and Prognosis of Vogt–Koyanagi–Harada Disease: Real-Life Experience in Long-Term Follow-Up
Next Article in Special Issue

The aim of this research was to analyze the facial class, presence of malocclusion, and the mandibular plane and to relate this to the mandibular condyle position. A cross-sectional study in subjects under analysis for orthognathic surgery was done. The mandibular plane, the gonial angle, and the molar class were included to compare the coronal and sagittal position of the condyle and the joint space observed in the CBCT. The measurements were obtained by the same observer at an interval of two weeks. In addition, the Spearman test was performed to determine the correlation using a p value < 0.05 to observe any significant differences. Eighty-nine male and female subjects (18 to 58 years old, 24.6 ± 10.5) were included. In the coronal section, subjects with CIII had a greater mediolateral distance (MLD, p = 0.0001) and greater vertical distance (SID, p = 0.0001) than subjects with CII. In terms of the skeletal class and the mandibular plane, it was observed that subjects in the CII group had a greater mandibular angle (open angle) (p = 0.04) than the CII group and was related to the anterior position of the condyle. The most anterior condylar position was observed in the CII group (p = 0.03), whereas a posterior condylar position was significant in CIII subjects (p = 0.03). We can conclude that the sagittal position of the TMJ was related to the mandibular plane and the skeletal class showing a higher mandibular angle and most anterior position of the condyle in CII subjects and a lower mandibular angle and most posterior position of the condyle in CIII subjects. The implications for surgical treatment have to be considered.
Keywords: temporomandibular joint; symmetry; orthognathic surgery; dentofacial deformity temporomandibular joint; symmetry; orthognathic surgery; dentofacial deformity

The temporomandibular joint (TMJ) includes some anatomical structures; clinical variables could affect or modify its morphology and position due to remodeling or changes on the surface as an adaptive response [1]. This adaptation could be an anatomical variation, functional response, or pathological condition [2].
Morphological changes in the TMJ and facial morphology can be related [3] because the condylar volume is related to the size of the mandibular neck, ramus, or body—mainly in the growing stage [4]. In fact, facial asymmetry is strongly connected to the volumetric condition of the condyle [5].
Some authors show that malocclusions and facial deformities have been related to the position and morphology of the TMJ by observing a shift in the mid-line, changes in mandibular movements, or facial pain [6]. On the other hand, other authors show that malocclusion is not related to pathological alterations of the TMJ [7,8,9,10,11].
Previous observations [12,13] indicate that the shape of the mandibular condyle and TMJ are related to facial morphology, and surgical treatment must include this variable.
The position of the condyle is an important finding for the diagnosis and planification of orthognathic surgery [13]. Any error in this analysis could lead to relapse or complications in the follow up [4]. In the 3D era, the direct analysis of the condylar position is necessary [1] because the tridimensional stability of the maxillomandibular movement will be influenced by TMJ position. In this sense, the size of the condyle could be related to the disk and ligaments and, finally, be related to the function of the TMJ [14].
Previous findings showed that the anteroposterior condylar position in subjects with non-surgical malocclusions showed differences between class II dental occlusions and normal dental occlusions but failed to find any differences in class III dental occlusions [15]. In subjects under surgical treatment for malocclusions, the morphology of the condyle could be different, but this is not a consensus in class II or class III dentofacial deformity.
The aim of this research was to analyze the facial class, presence of malocclusion, and the mandibular plane as they relate to the mandibular condyle position (Supplementary Material).

Eighty-nine subjects were included in this cross-sectional study that analyzed the angulation of the mandibular plane, dental occlusion, and position of the sagittal and coronal condyle in the temporo-mandibular joint (TMJ) in subjects with class II and class III dentofacial deformities. The subjects signed an informed consent form, and the study was conducted by protecting the participants’ integrity and respecting the Declaration of Helsinki. The research protocol was approved by the ethics committee of the Universidad de La Frontera (protocol: 056/21)
A 3D image obtained by cone beam computed tomography (CBCT) was used and analyzed in the NewTom 3D software, VGi EVO model (Verona, Italy) with visualization field of 24 cm × 19 cm and exposure parameters of 110 kV, 8 mA, 15 s. The image was obtained by a radiologist; the patient was placed in a vertical position, keeping the lips at rest, without forcing a body position.
Male and female subjects in the pre-operative stage of orthognathic surgery were included; all of them showed a bilateral upper and lower first molar or skeletal deformity class II (>4° in the ANB angle) or class III (<0° in the ANB angle). The facial symmetry of the participants was confirmed by clinical evaluation with a clinical deviation of the chin up to 5 mm, and dental symmetry was assessed by observing a clinical deviation of the dental midline up to 3 mm. We excluded subjects with an absence of key teeth, such as incisors, canines, bicuspids, or the first molar; previous facial surgery; history of facial trauma; presence of facial syndromes; or conditions with significant morphological changes.

To determine the angle of the mandibular plane, the McNamara analysis was used, which uses the intersection of the points Po-Or and Go-Ch (Go: Gonion, point located in the most posterior and lower area of the mandibular angle; Ch: Chin, lower point of the mandibular symphysis), with a normality parameter of 25° ± 4° (Figure 1).

2.5. Coronal Analysis of the Condyle

Eighty-nine subjects were included with an age between 18 to 58 years old (24.6 ± 10.5). Thirty-six were male (40.4%) and fifty-three were female (59.5%). The male group showed a greater upper joint space and condylar measurement with no statistical differences (Table 2).
In terms of dentofacial deformity (FD), 56 subjects presented a skeletal type II FD (CII) and 33 presented a skeletal type III FD (CIII) (Table 3). CII subjects showed greater distances in the joint space (SJS, p = 0.42 and EAP, p = 0.12) with no statistical differences. However, the size of the mandibular condyle presented significant differences, with CIII subjects having a greater mediolateral distance (MLD, p = 0.0001) and upper-to-lower distance (VD, p = 0.0001) than CII subjects.
Dental occlusion was related to facial deformity (p = 0.0001) (Table 2); CII subjects showed a significantly higher mandibular angle (p = 0.04) than CIII subjects. In the same direction, subjects with CII presented a greater gonial angle (p = 0.03) than subjects with CIII, and the mandibular condylar position was strongly related to the mandibular plane (p = 0.03). The differences between CII and CIII subjects were observed in the anterior condylar position in the glenoid fossa; CII subjects showed a more anterior position than CIII subjects (Table 4).

The following supporting information can be downloaded at: https://www.mdpi.com/article/10.3390/jcm11133631/s1, Video S1: TMJ position in subjects with facial deformity.

The study was conducted in accordance with the Declaration of Helsinki, and approved by the Institutional Review Board of Universidad de La Frontera (protocol 056/21).

Data are available upon reasonable request. 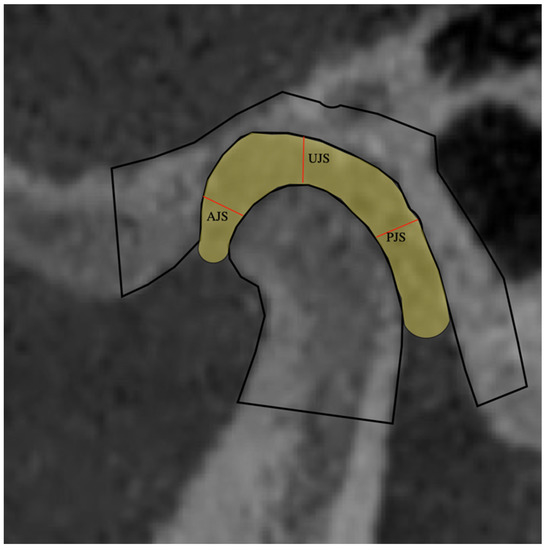