Treatment and Prognosis of Vogt–Koyanagi–Harada Disease: Real-Life Experience in Long-Term Follow-Up
Next Article in Special Issue

The aim of this research was to analyze the facial class, presence of malocclusion, and the mandibular plane and to relate this to the mandibular condyle position. A cross-sectional study in subjects under analysis for orthognathic surgery was done. The mandibular plane, the gonial angle, and the molar class were included to compare the coronal and sagittal position of the condyle and the joint space observed in the CBCT. The measurements were obtained by the same observer at an interval of two weeks. In addition, the Spearman test was performed to determine the correlation using a p value < 0.05 to observe any significant differences. Eighty-nine male and female subjects (18 to 58 years old, 24.6 ± 10.5) were included. In the coronal section, subjects with CIII had a greater mediolateral distance (MLD, p = 0.0001) and greater vertical distance (SID, p = 0.0001) than subjects with CII. In terms of the skeletal class and the mandibular plane, it was observed that subjects in the CII group had a greater mandibular angle (open angle) (p = 0.04) than the CII group and was related to the anterior position of the condyle. The most anterior condylar position was observed in the CII group (p = 0.03), whereas a posterior condylar position was significant in CIII subjects (p = 0.03). We can conclude that the sagittal position of the TMJ was related to the mandibular plane and the skeletal class showing a higher mandibular angle and most anterior position of the condyle in CII subjects and a lower mandibular angle and most posterior position of the condyle in CIII subjects. The implications for surgical treatment have to be considered. View Full-Text
Keywords: temporomandibular joint; symmetry; orthognathic surgery; dentofacial deformity temporomandibular joint; symmetry; orthognathic surgery; dentofacial deformity
►▼ Show Figures 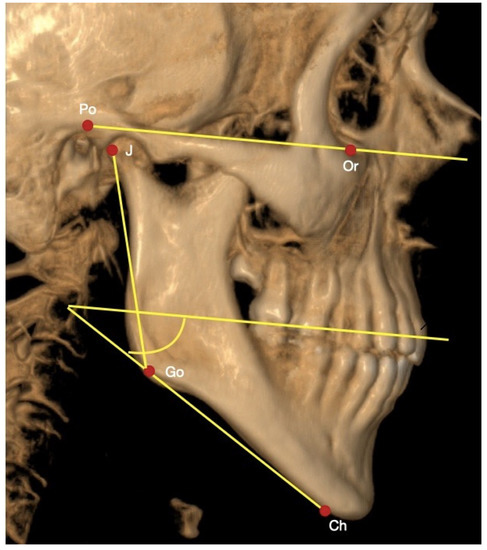