Chemically-Boosted Corneal Cross-Linking for the Treatment of Keratoconus through a Riboflavin 0.25% Optimized Solution with High Superoxide Anion Release
Previous Article in Special Issue

:
Prevalence of inflammatory bowel disease has been on the rise in recent years, especially in pediatric populations. This study aimed to provide precise identification and stratification of pediatric patients with diagnosed ulcerative colitis (UC) according to the severity of their condition and the prediction for standard treatment according to the specific expression of candidate miRNAs. We enrolled consecutive, therapeutically naïve, pediatric UC patients with confirmed pancolitis. We examined formalin-fixed paraffin-embedded specimens of colonic tissue for the expression of 10 selected candidate miRNAs. We performed receiver operating characteristic curve analysis, using area under the curve and a logistic regression model to evaluate the diagnostic and predictive power of the miRNA panels. Sixty patients were included in the final analysis. As a control group, 18 children without macroscopic and microscopic signs of inflammatory bowel disease were examined. The combination of three candidate miRNAs (let-7i-5p, miR-223-3p and miR-4284) enabled accurate detection of pediatric UC patients and controls. A panel of four candidate miRNAs (miR-375-3p, miR-146a-5p, miR-223-3p and miR-200b-3p) was associated with severity of UC in pediatric patients and a combination of three miRNAs (miR-21-5p, miR-192-5p and miR-194-5p) was associated with early relapse of the disease. Nine patients out of the total were diagnosed with primary sclerosing cholangitis (PSC) simultaneously with ulcerative colitis. A panel of 6 candidate miRNAs (miR-142-3p, miR-146a-5p, miR-223-3p, let-7i-5p, miR-192-5p and miR-194-5p) identified those patients with PSC. Specific combinations of miRNAs are promising tools for potential use in precise disease identification and severity and prognostic stratification in pediatric patients with ulcerative pancolitis.
Keywords:
pediatrics; inflammatory bowel disease; ulcerative colitis; microrna; primary sclerosing cholangitis

Inflammatory bowel disease (IBD) is a chronic complex disorder of the digestive system caused by multiple factors, including genetics, epigenetics, gut microbiota, environmental factors and altered immune system, although the precise mechanisms underlying the pathogenesis of this disease remain unclear [1,2,3]. Owing to chronic inflammation, patients with ulcerative colitis (UC) and Crohn’s disease (CD) involving the colon have an increased risk for colon cancer. The risk increases with time from diagnosis and higher-risk groups include those younger at diagnosis, with pancolitis, or with associated primary sclerosing cholangitis (PSC) [4,5].
Although prevalence of the disease peaks in the fourth and fifth decades of life, a substantial number of patients have onset of IBD during early childhood [6,7]. Significant differences in clinical manifestation, possible pathophysiology and treatment between children and adults prevent extrapolation of knowledge from one group to the other [8]. Studies have shown that phenotypes of pediatric patients with IBD are more aggressive and with more damaging impact disrupting normal growth and overall development of the child [9]. Moreover, therapeutically naïve patients often show quite different responses to the treatment given [10,11]. Despite outstanding achievements in therapeutic interventions, there is a clear need for biomarkers enabling accurate identification, prognosis and prediction of response to therapies to facilitate a more individualized approach. In recent years, evidence has continued to evolve concerning non-coding RNAs (ncRNAs) and their roles as integral factors in key immune-related cellular pathways. Specific deregulation patterns of ncRNAs have been linked to the pathogenesis of adult and pediatric IBD [12]. Several microRNAs (miRNAs) and specific miRNA signatures have been identified in IBD-associated tissues. It has been shown that, among many other cellular processes, miRNAs play a significant role in intestinal immunity. Nevertheless, there exists only sparse information on ncRNA profiles and their diagnostic and prognostic potential in pediatric IBD patients [12]. In this article, we stratify therapeutically naïve pediatric patients with diagnosed UC according to the severity of their condition and the prediction for standard treatment according to the specific expression of 10 candidate miRNAs.

Subjects were enrolled at the Department of Pediatrics, University Hospital Brno, Czech Republic. Eligible subjects consisted of children having been diagnosed with UC (only pancolitis) according to relevant guidelines [13,14] (clinical history, physical examination, laboratory results, serological testing, radiologic findings and endoscopic appearance with stepwise biopsy for review by clinical pathologists) in a period between 1 January 2012 and 31 December 2018. All patients underwent upper gastrointestinal endoscopy and ileocolonoscopy. All were 0–18 years of age at the time of diagnosis and were resident in the South Moravian Region, one of 14 regional administrative units in the Czech Republic [6]. Enrolled into the study were only unequivocal UC cases with pancolitis (with proven macroscopic and microscopic disease affection) as determined by the Paris classification (E4) [15]. Patients without indisputable diagnosis of UC according to the Porto criteria were excluded from further analyses [14]. Initial severity of the disease was evaluated by an experienced gastroenterologist using the pediatric ulcerative colitis activity index (PUCAI) score [16]. In our other analyses, we focused only on patients with mild (PUCAI 10–34) and moderate (PUCAI 35–64) ulcerative pancolitis. Patients with severe colitis (PUCAI > 65) were excluded from the study for a low number of patients (n = 3) and lack of representative material for an examination. We examined formalin-fixed paraffin-embedded specimens of colonic tissue (rectosigmoid colon).
We focused on precise identification of pediatric UC patients and, thereafter, on possible stratification for severity of disease according to specific patterns of candidate miRNAs’ expression in colonic tissue. We then undertook to create a candidate model for predicting early relapse of the disease. Patients received initial standardized treatment with mesalazine and/or corticosteroids guided by the PUCAI according to relevant national guidelines [17] and were evaluated for adherence to therapy by use of structured interview. We monitored whether after standard treatment a patient experienced an early relapse during the first year of treatment despite significant initial remission of the disease, defined as PUCAI < 10 during the first 3 months after diagnosis and fecal calprotectin <100 ug/L. Moreover, we compared patients with diagnosed PSC and patients without this diagnosis.
As a control group, we used children indicated for the endoscopic examination mostly due to chronic abdominal pain, but these patients did not show neither macroscopic nor microscopic signs of IBD and fecal calprotectin was normal. None of the patients were diagnosed with IBD one year after enrollment in the study.
The Institutional Ethical Committee approved the study at University Hospital Brno in accordance with the Declaration of Helsinki.

A total of 60 patients with complete clinical data and with a sufficient amount of material from colonic tissue for further analysis were included in the final analysis. The basic demographic and clinical characteristics of patients are shown in Table 1.
As a controls, we used a group of 18 children without macroscopic and microscopic signs of IBD. The control group consisted of 12 girls (66.7%) and 6 boys (33.3%), with mean age of 14.6 years.

Endeavoring to stratify patients according to their response to the standard therapeutic regime, we identified in the same manner three specific miRNAs (upregulated miR-21-5p and downregulated miR-192-5p and miR-194-5p) that appear to be associated with early disease relapse, where early relapse was assessed as a significant worsening of the patient’s condition during the first year of treatment (based on clinical score, laboratory results and elevated fecal calprotectin levels) (Figure 4).

To determine the most robust miRNA panel for the identification of patients with UC and primary sclerosing cholangitis, an adaptive LASSO model was applied to the qPCR data using JMP 14.0.0 (SAS Institute, Cary, NC, USA). Four upregulated (miR-142-3p, miR-146a-5p, miR-223-3p and let-7i-5p) and two downregulated (miR-192-5p and miR-194-5p) miRNAs were identified (Figure 4).

In conclusion, we independently verified the biomarker potential of miRNAs feasible for assessing detection and prognosis and discovered that their combinations could distinguish not only UC patients from controls without signs of IBD but even more specific conditions such as disease severity, early relapse and even association with PSC. A larger cohort of patients with not only UC but also CD and a study based on expression profiling using high-throughput platforms and independent validation is greatly needed in this field.

The study was conducted according to the guidelines of the Declaration of Helsinki and approved by the Ethics Committee of University Hospital Brno.

The data underlying this article cannot be shared publicly due to ethical reasons. The data will be shared on reasonable request to the corresponding author. 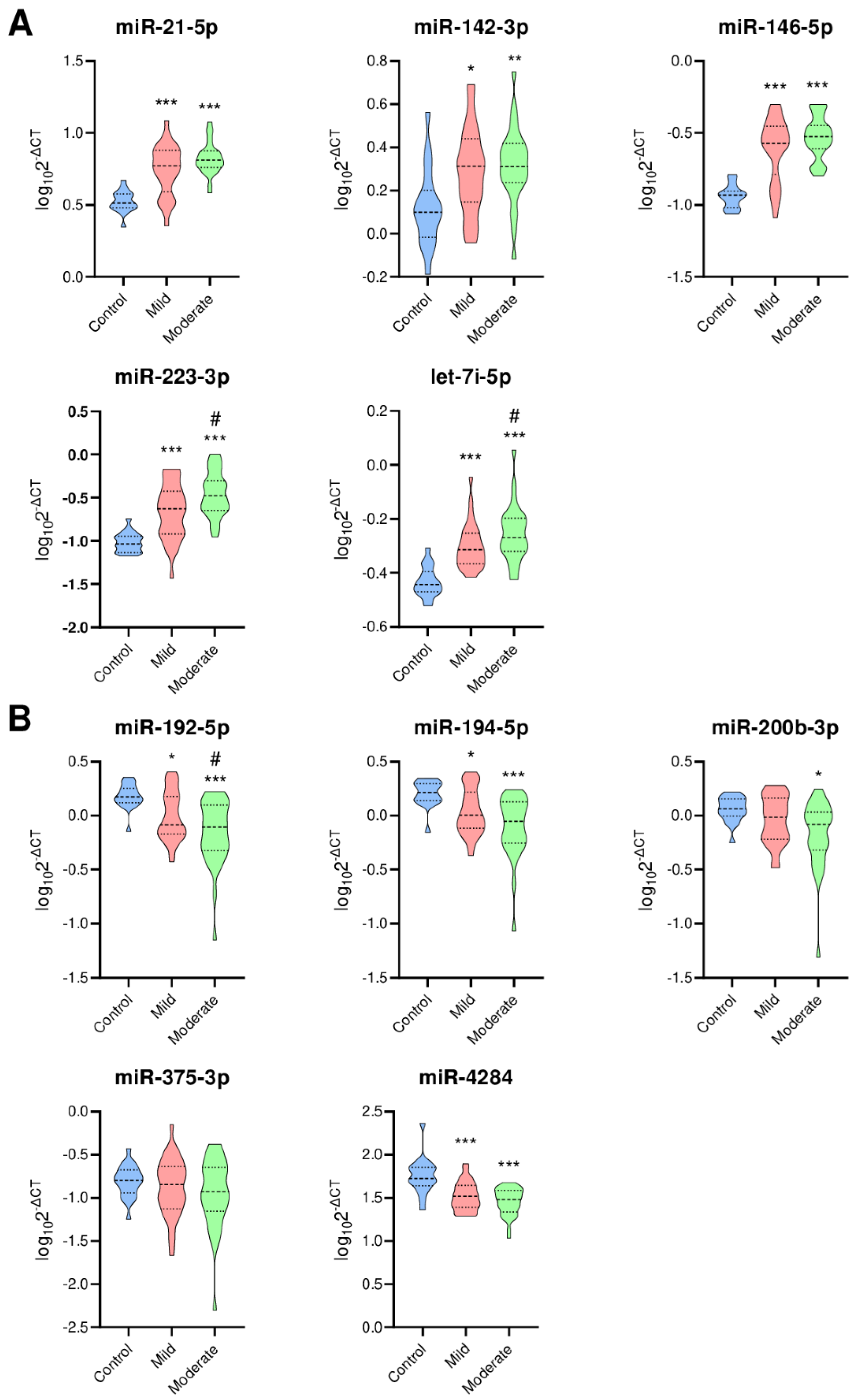 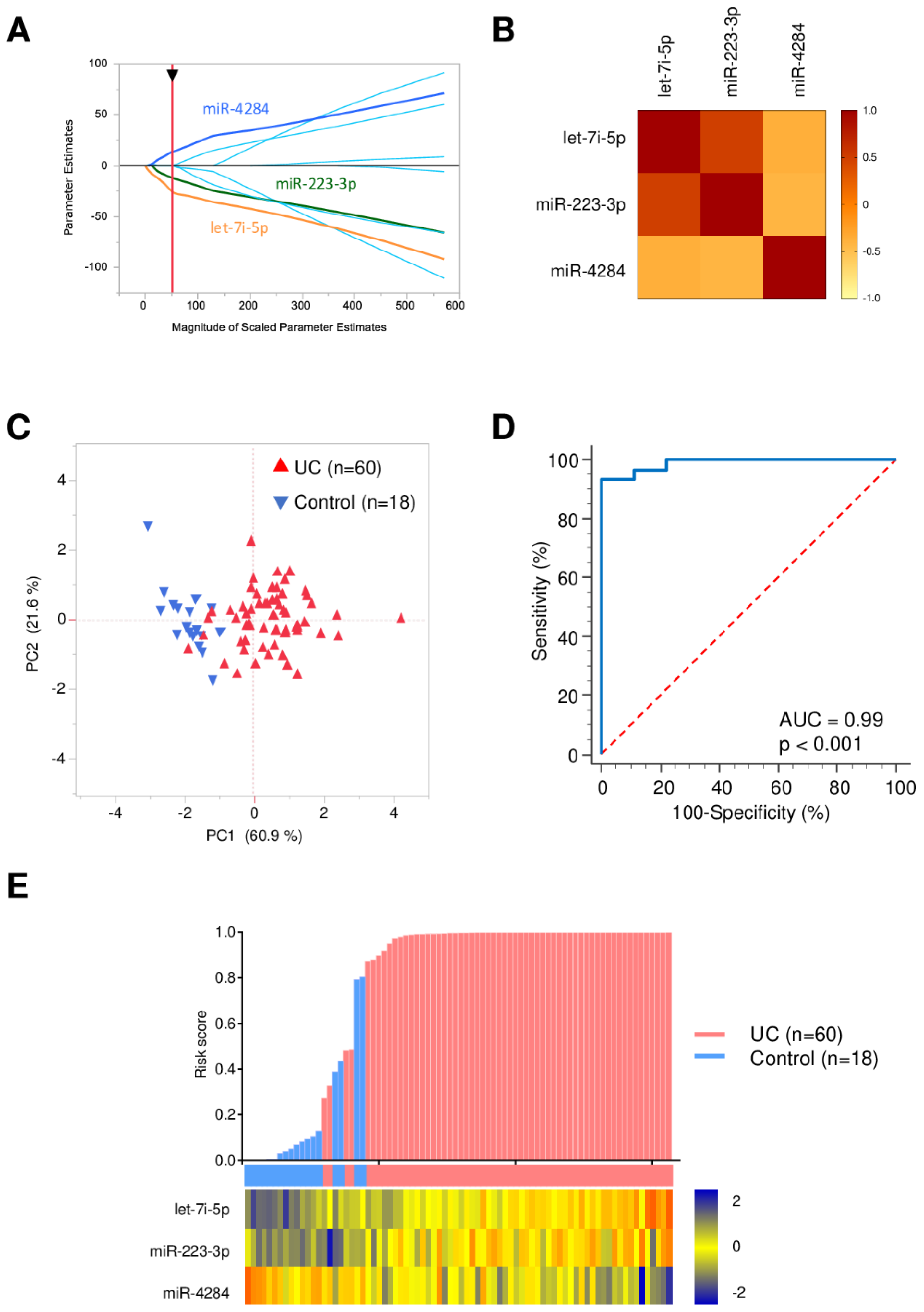 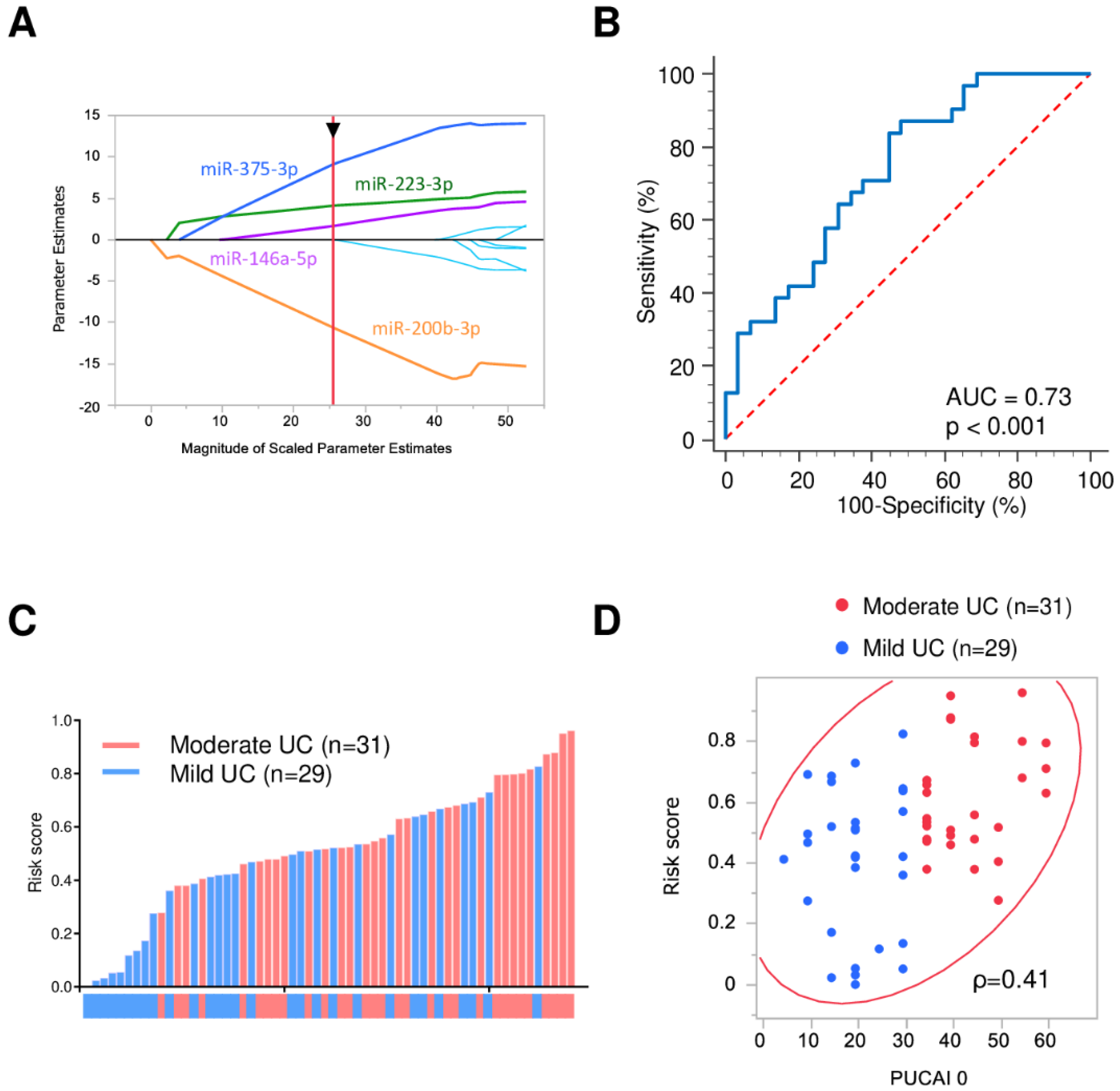 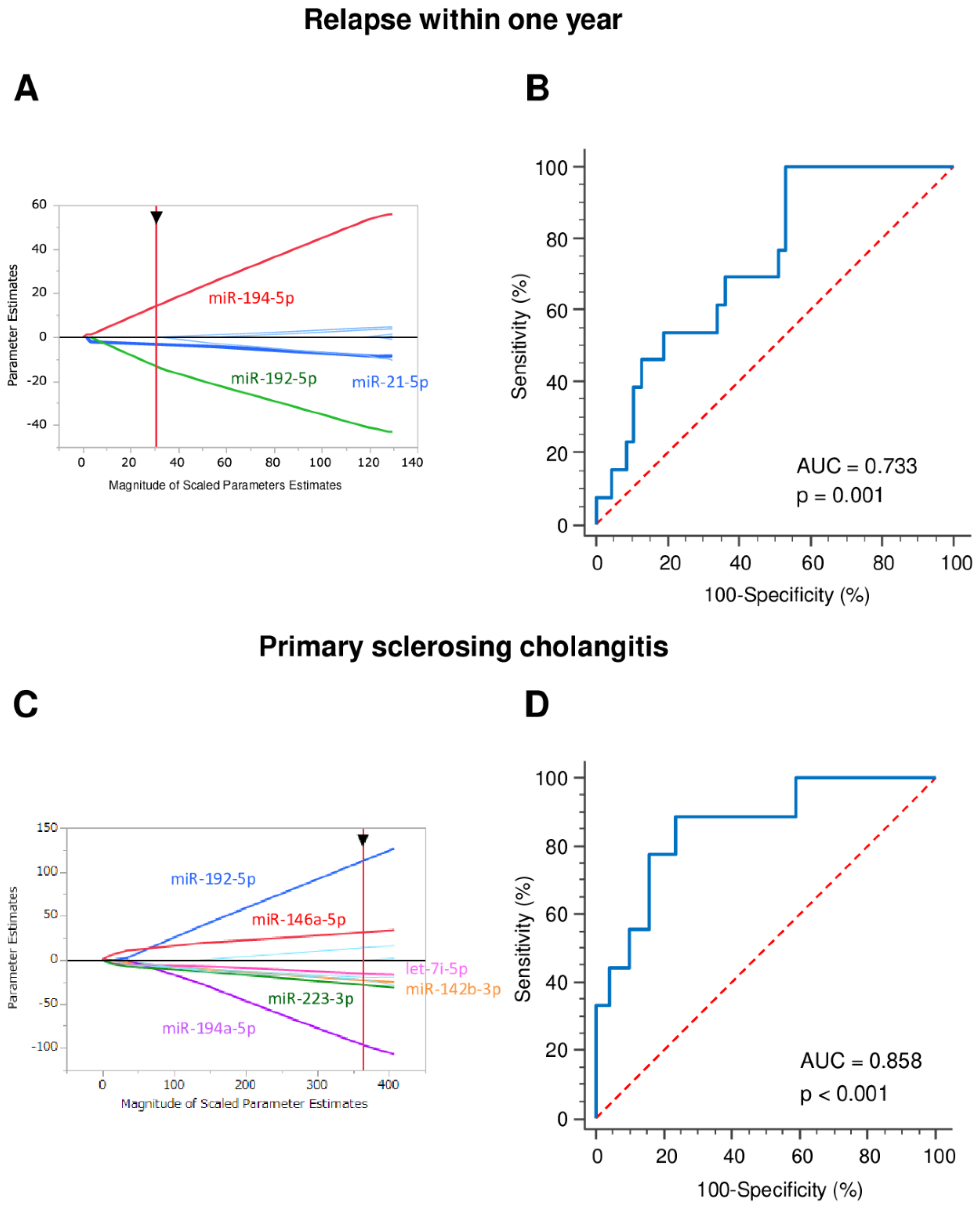