Efficacy and Safety of Different Formulations of Calcipotriol/Betamethasone Dipropionate in Psoriasis: Gel, Foam, and Ointment
Previous Article in Journal

The Influence of COVID-19 on Out-Hospital Cardiac Arrest Survival Outcomes: An Updated Systematic Review and Meta-Analysis

Maintaining a healthy periodontium is the key to maintaining a fully functional stomatognathic system. All procedures should be carried out in a way that prevents damage to the structures of periodontal tissues and enables the beneficial effects after the applied treatment to be maintained in the long term. Orthodontic treatment of patients with transverse maxillary deficiency can lead to adverse changes in the bone and soft tissues. As a result of the expansion of the dental arch, particularly in patients with the thin phenotype, it is highly probable to develop bone dehiscence and gingival recession [1,2,3,4,5]. The consequences of gingival recession, in addition to the aesthetic problem, may include loss of hard dental tissues and tooth sensitivity [6,7]. The treatment of this type of complication requires significant financial resources and additionally burdens the patient. Furthermore, it does not offer the possibility of reconstructing the lost bone or soft tissues, which may generate further adverse changes in the long-term observations [8]. Therefore, in order to limit the negative effects of arch expansion on periodontal tissues, additional methods supporting orthodontic treatment are sought. A basic type of treatment, especially recommended to patients with a thin phenotype, is gingival augmentation with the use of autogenous bone grafts or biomaterials as a form of prevention of gingival recession [9,10]. A completely different concept is corticotomy, which consists of the cutting of buccal and/or palatal compact bone plate, generating the regional acceleratory phenomenon (RAP). RAP is a cascade of physiological events leading to increased bone turnover accompanied by demineralization and the formation of a new bone at the site of injury [11,12,13,14]. Due to this phenomenon, when orthodontic force is applied, not only the tooth but also the adjacent demineralized bone matrix is displaced, which potentially reduces the risk of bone dehiscence and the subsequent gingival recession [15,16,17,18,19,20,21,22]. It should be remembered that bone apposition is also stimulated by properly performed orthodontic treatment [23].
The currently available literature data do not provide a clear answer as to whether the use of corticotomy prior to orthodontic arch expansion prevents adverse bone and soft tissue changes [24,25,26,27,28,29,30,31,32,33,34,35]. Moreover, there are no long-term data evaluating periodontal changes after this type of treatment.
In the light of the above, the aim of this study was to assess the periodontium condition at least five years after the combined surgical and orthodontic treatment of patients with maxillary narrowing.

The study was designed as a case series study. The study involved 20 patients treated in the years 2011–2014. Patients with transverse maxillary deficiency, scheduled for corticotomy-supported orthodontic treatment of the upper dental arch, qualified for the study. The sample size calculation was made in G*POWER software using 0.2 effect size and power = 0.9. The aim of performing corticotomy was to prevent bone dehiscence and gingival recession.
The inclusion criteria were as follows: voluntary participation, adult (>18 years old), non-smoker, generally healthy, with malocclusion with transverse maxillary deficiency with indications for upper arch expansion, good oral hygiene and motivation at screening quantified as: full mouth plaque index (FMPI) <20%, full mouth bleeding on probing (FMBOP) <20%. The exclusion criteria were the following diseases or conditions: periodontal disease and oral mucosa lesions, bisphosphonate and long-term corticosteroid therapy, current therapy with anti-epileptic drugs, contraceptives, estrogen, antihistamine drugs, calcitonin, vitamin D, alcohol and/or drug addiction, the presence of periapical endo-periolesions, severe gingival recession, pregnancy, breast feeding, previous orthodontic treatment and root resorption. Within the study group, the following malocclusions were diagnosed: Class I with crowding—six patients; Class I with lateral crossbite—three patients; Class I with bilateral crossbite—two patients; Class II Division 1—one patient; Class II Division 1 with anterior open bite—two patients; Class II Division 2—one patient; and Class III with a skeletal relationship—five patients.
The surgery was done in maxilla under local anesthesia with 4% articaine (Ubistesin forte, 3 M ESPE, Maplewood, MN, USA). The mucoperiosteal flap was elevated up to the point above the apical parts of roots following modified papilla preservation technique as well as performing vertical releasing incisions [36]. Then, osteotomy of the buccal cortical plate of the alveolar process was performed by using OTS7, OTS7–4, and OTS7-3 ultrasound tips of the piezosurgery device (Mectron S.p.A., Carasco, Italy). The extension of the osteotomy was determined by the mesio-distal dimension of the teeth roots as well as by the position of the apexes of roots. In order to avoid interproximal bone pick resorption, the vertical cuts ended 5 mm apically from the crest and then spread in a Y-shape towards the neighboring teeth. The horizontal corticotomy was performed approximately 2–4 mm apically above the root apexes. The depth of the cuts was limited to the thickness of the cortical plate. The repositioned flap was sutured with non-resorbable monofilament 5.0 and 6.0 sutures (Resolon, Resorba Medical GmbH, Nümberg, Germany). One gram of amoxicillin 2×/day for 7 days, 200 mg of ibuprofen 3×/day, and mouth rinsing with chlorhexidine (0.10% Eludril, Pierre Fabre Sante, Paris, France) 2×/day were prescribed, and gentle tooth brushing using an ultra-soft post-surgical toothbrush and the roll technique in the surgical area for two weeks after the surgery was recommended to the patients. The supragingival plaque was cleaned out 7 and 14 days after the surgery. The sutures were removed 14 days post-op, and tooth brushing with a soft toothbrush and the roll technique was recommended. The detailed methodology and post-treatment results are presented in the publication from 2018 [25].
A check-up was performed 5–8 years after corticotomy (on average, after 6.5 years). The examination was participated in by 18 subjects (9 women, 9 men) aged from 26 to 46 years. Two patients (1 female and 1 male) did not attend the examination due to the COVID-19 pandemic. All clinical examinations were performed by the same doctor.
The following parameters were assessed: the full mouth plaque index (FMPI), full mouth bleeding on probing (FMBOP), probing depth (PD), clinical attachment level (CAL), gingival recession height (GR), recession width (RW), papilla height (PH), papilla width (PW), bone sounding (BS), phenotype and keratinized tissue (KT).
The measurements were performed using a manual PCP UNC 15 periodontal probe (Hu-Friedy, Chicago, IL, USA) by one calibrated investigator. All measurements were rounded to the nearest 0.5 mm.
Phenotype—gingival thickness was measured under anaesthesia at mid-facial aspect of the tooth on a long axis 1 mm apically from the bottom of the sulcus with the use of K-file 25 ISO with a silicone marker [37]. Keratinized tissue (KT) was measured from the most apical point of gingival margin to the mucogingival junction.
The study was conducted in accordance with the Helsinki Declaration of 1975, as revised in 2000, and was reviewed and approved by the local ethical committee (Ethics Committee No.: R-I-002/344/2011).

The variables were described by the parameters of descriptive statistics, i.e., arithmetic mean, standard deviation, median, lower and upper quartile, and minimum and maximum value. The normality of distribution was tested using the Shapiro–Wilk test. ANOVA, MANOVA with Tukey’s post hoc HSD test, or Friedman’s test with Dunn’s multiple comparisons test with Bonferroni correction (depending on the assumptions fulfilled) were used for comparing the three groups. For differences between the measurements (one year vs. a minimum of 5 years after the treatment), the mean values with 95% confidence interval and standard deviation are provided. For statistical analyses, a significance level of p < 0.05 was assumed. The analyses were performed using the PQStat program, version 1.8.0.476.

During the follow-up examination, 142 teeth were examined—one molar had been previously extracted due to endodontic complications.
It was found that one year after corticotomy and at least five years later, FMPI and FMBOP values were comparable (Table 1).
In the examinations performed at least five years post treatment, we observed a significant reduction in PD and CAL compared to the examination conducted one year after treatment. The values of PD decreased from 2.48 ± 0.51 to 2.28 ± 0.48 mm, and those of CAL decreased from 2.49 ± 0.51 to 2.48 ± 0.86 mm (Table 2).
One year post treatment, 8/159 (5.03%) gingival recessions of Miller Class I were found. In the follow-up examination, the number of gingival recessions increased to 9/142 (6.34%). The values of all the other analyzed parameters, viz: GR, RW, PH, PW, BS, phenotype and KT, did not change significantly during the evaluated observation period. Detailed numerical data related to these parameters are included in Table 3. Figure 1, Figure 2, Figure 3 and Figure 4 present the clinical status of one of the patients—before the treatment, during corticotomy procedures, as well as one year and six years after the corticotomy procedure.

The study was supported by Medical University of Białystok.

The study was conducted in accordance with the Helsinki Declaration of 1975, as revised in 2000, and was reviewed and approved by the local ethical committee of the Medical University of Białystok (Ethics Committee No.: R-I-002/344/2011). All the patients gave their written informed consent for participation in the study.

The data presented in this study are available in the article.

The authors declare that there is no conflict of interest in this study. 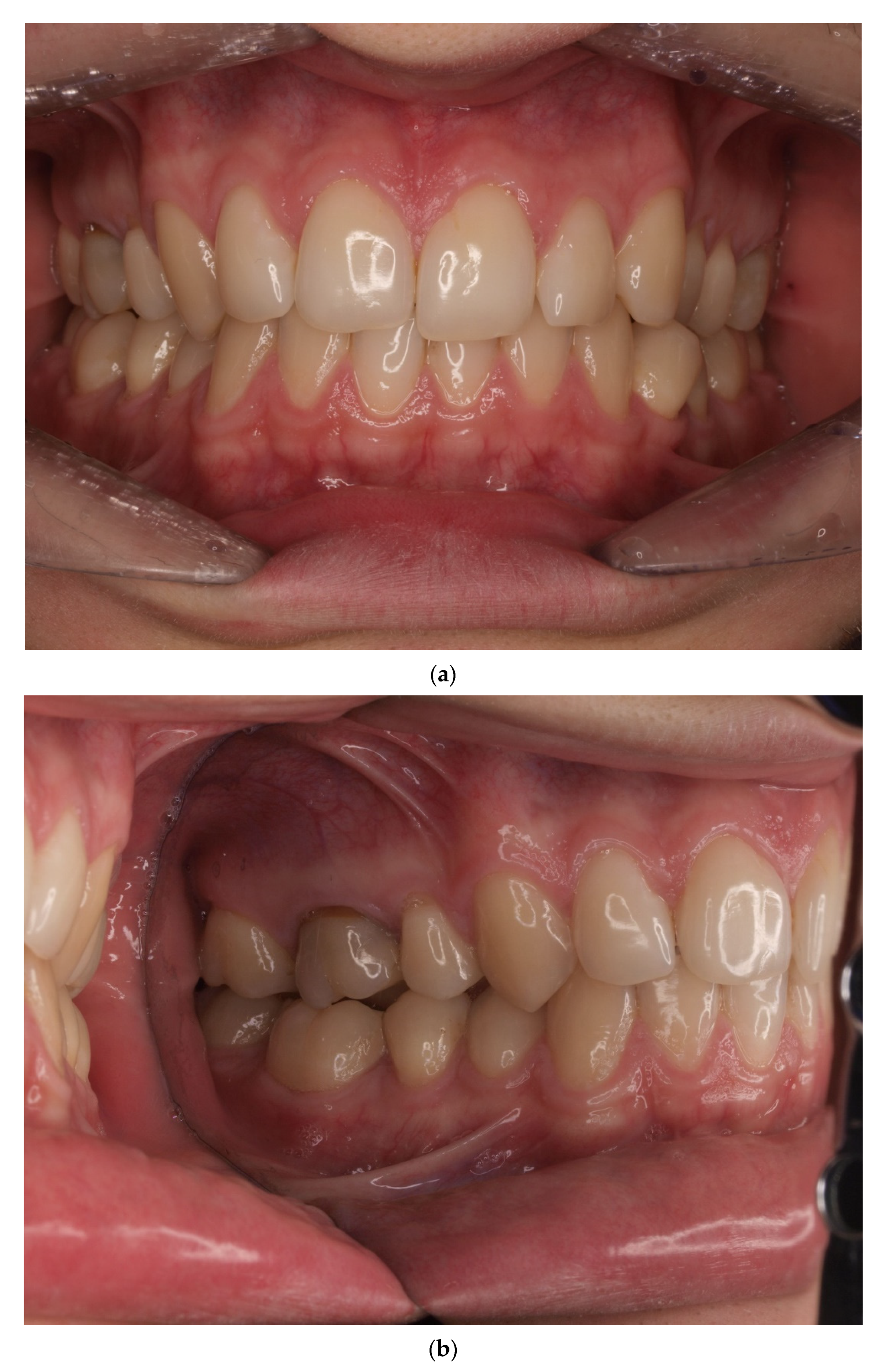