The Assessment of Fear of COVID-19 among the Elderly Population: A Cross-Sectional Study
Previous Article in Journal

In this retrospective observational single center study, we evaluated safety and treatment effects of combining disease-modifying therapies, such as nusinersen and onasemnogene abeparvovec-xioi, in SMA type I patients.
SMA diagnoses and type classification were made by the pediatric neurologists at our institute (M.A. and M.L.). Genetic diagnosis was conducted using the Multiplex Ligation-Dependent Probe Amplification (MLPA) technique [47]. SMN1 gene exons 7/8 homozygous deletion was confirmed in all reported patients. The number of SMN2 copies was also determined by MLPA (all included patients had 2 SMN2 copies).
All patients were treated in the National University Center for Pediatric Neurorehabilitation “Dr. Nicolae Robanescu” (NUCCNNR) in Bucharest, Romania, between July 2019 and May 2021, and we applied to all of them standards of care according to international guidelines [20,21,48], in order to provide uniformity of care among the patients.
We designed this observational study after obtaining ethical committee approval at our hospital; data were collected during periodic evaluations, according to our protocols for drug administration, and all patients’ parents signed informed consents.
Patients were monitored for disease progression and treatment efficacy, using the Children’s Hospital of Philadelphia Infant Test of Neuromuscular Disorders (CHOP-INTEND) [49,50]. The test was performed at the initiation of each therapy and then every 6 months by trained physical therapists from the Neuromuscular Diseases Department in our institute.
We also evaluated the need for non-invasive ventilation (NIV) [51] and also for cough assist sessions [51,52], noting the daily required number of hours/sessions for NIV and for cough assist.
We created 2 groups. In the first one, we included 7 patients (4 males and 3 females) with SMA type I, aged (at the initiation of the first treatment) between 2 months and 6 months old, who received combination therapy as follows: six of them received nusinersen first, as this drug is reimbursed in Romania, then onasemnogene abeparvovec-xioi, which had been accessed through the early-access MAP or crowdfunding. Only one of them received onasemnogene abeparvovec-xioi (through a trial in France) first and then nusinersen 18 months later.
In the second (control) group, we selected 6 other patients who received only nusinersen. Thus, we included 6 patients (3 males and 3 females aged at the initiation of therapy between 2 months and 6 months) diagnosed and genetically confirmed with SMA type I.
We compared changes in motor and respiratory functions between control and study groups, but also between patients receiving the first therapy (T1) and then after receiving two therapies in combination—nusinersen continuing and onasemnogene abeparvovec-xioi (T2). In this respect, for the control group, we evaluated the CHOP-INTEND score at initiation, then every 6 months until 24 months after nusinersen initiation. The same evaluations were performed for the number of ventilation hours and cough assist sessions.
Data analysis was performed in collaboration with the Scientific Research Core from NUCCNNR, using Microsoft Excel and SPSS Statistics for Windows Version 24 and, as the number of patients included in this study was limited, we chose to perform comparisons of the median scores.

Before adding GT in the study group, no adverse reactions were observed after nusinersen treatment was administered. In the control group, mild agitation (probably due to headache post LP) occurred in two patients, who did not need any antalgic treatments. This might be caused by not respecting the medical recommendation to keep the flat position post-LP.
In the combined therapies group, one patient (Patient 7NZ—see Table 1) died 2 months after GT, after developing serious adverse reactions (the patient had bleeding, respiratory arrest, renal failure needing peritoneal dialysis for one month, was intubated for the whole period after dosing, and was admitted to the Intensive Care Unit), so we noted only the evaluations after the first treatment with nusinersen: the CHOP-INTEND score increased from 8 to 29 points at 6 months after T1 (five doses of nusinersen) and reached 36 points 12 months after T1 (six doses of nusinersen). The score was maintained at 36 points 2 months later, when this patient received GT infusion. There were no changes in ventilation hours and number of cough assist sessions before GT dosing and 1 week later. However, after the onset of GT adverse reactions, the patient was intubated.
After GT, all other patients presented with fever, vomiting, lack of appetite, mild thrombocytopenia and liver enzyme elevation, but only in two patients did the dose of prednisone need to be increased and require prolonged treatment (see Table 1—Patients 1NZ–5NZ and 6ZN). Probably due to a longer (5 months) corticosteroids treatment period, one of the patients presented with demineralization fractures (Figure 1), for which treatment was recommended with supplementary vitamins (C, D) and minerals (calcium, magnesium, phosphorus).
For the only patient who received first onasemnogene abeparvovec-xioi (Patient 6ZN—see Table 2), CHOP increased four points after 6 months from T1 and nine points 6 months after T2 (before the fifth dose of nusinersen). Ventilation time was reduced by 2 h/day for 6 months after T1, while in the same period after T2, no change in NIV hours was needed. For cough assist, a decrease was registered—1 time for T1, but no change after T2.
In the other five patients who received nusinersen first (Patient 1NZ-5NZ—see Table 1), we observed the following:

In the control group, for the 6-month period evaluated, we observed slight improvements in ventilation (median decreased by 2 h per day—see Table 2) and insignificant changes in the cough assist session (see Table 2).
Statistical analysis for CHOP-INTEND score evolution 6 months after therapy initiation for both groups—the control group and the study group (at 6 months after T1 and 6 months after T2)—is presented in Table 3.
Among the control group patients, we noticed that the CHOP-INTEND score (see Figure 2) had also slightly improved for the same 6-month period.
For the study group, we observed and compared the two defined time points (T1 and T2). In this respect, the CHOP-INTEND score evolution showed a rapid increase in the first 6 months from T1; then, in the following 6–12 months, the trajectory of the curve grew at a slower pace, as can be seen in Figure 2. The same score progression is observed 6 months later after T2.

Examining the study group’s evolution, we can see that adding the second therapy helps improve ventilation. However, when comparing the results with those of the control group, we observe that ventilation was also ameliorated. It should be stated that these patients respected the respiratory management protocol thoroughly [53], and they performed daily lung volume recruitment [54]. Therefore, we may conclude that, over time, adhering to the standards of care helped improve their respiratory status in conjunction with the child’s growth (including airways), independently of the therapy used. Long-term follow-up and larger study groups could provide more data, so further investigations are needed.
The improved motor function response in patients receiving nusinersen as the first therapy, compared to those who received GT first (despite other studies—see below), could be due to a number of reasons: compliance with the standards of care, individual favorable response of each patient to a specific therapy or age at the time of treatment. In order to investigate other aspects that might provide new information on this matter, we analyzed pNF-H levels [55] from cerebrospinal fluid and plasma—as an indicator of neuronal degeneration, due to disease progression—and correlated them with motor score evolution (ongoing study in NUCCNNR).
We mentioned patients 2N and 6N from the control group who obtained maximum scores on CHOP-INTEND and could not be objectively evaluated. As their motor skills surpass CHOP-INTEND evaluation scores, we believe that their maintaining values do not represent a stagnation. After the 24-month evaluation, these children continued to be assessed with other scales, usually used for SMA II patients.
Regarding nusinersen’s efficacy compared to onasemnogene abeparvovec-xioi, a study from 2019 [56] was conducted, retrospectively, in children aged up to 2 years, and compared two clinical trials for onasemnogene abeparvovec-xioi (AVXS-101-CL-101) and nusinersen (ENDEAR); it analyzed the overall survival rate, the rate of survival without events (event-free survival) and the rate of motor function improvement. This study concluded that GT seems to be more effective than nusinersen in terms of the global survival rate, motor function improvement and need for assisted ventilation. However, the validity of this study has been disputed. For better comparison, further studies are needed, as the inclusion/exclusion criteria and standards of care were not uniform across the groups of patients included in these two studies.
Our study showed that when we include the age of the patients when treatment was initiated and other parameters, treatment efficacy depends heavily on the timing of administration. Sooner is better—ideally, before symptom-onset [57,58], which correlates with very sudden motor regression (in SMA I patients), associated with motor neuron loss (more than 80–90%) [59], a subsequent drop in compound muscle action potential (CMAP) amplitude and active denervation on electromyography [60].
Once this phase is over and the denervation process has stabilized, compensatory changes such as chronic denervation/reinnervation will start. From this moment on, we consider that treatment efficacy is significantly reduced. Therefore, as observed in our patients’ CHOP-INTEND scores, the trajectory curves tend to show slower improvement after the first 6–12 months since the treatment was given, regardless of the type of therapy they received.
To conclude, adding GT after nusinersen does not seem to provide supplementary benefits for motor function or respiratory status, but early treatment results in better outcomes.

The study was conducted according to the guidelines of the Declaration of Helsinki, and approved by the Ethics Committee of National University Center for Children Neurorehabilitation “Dr. Nicolae Robanescu” (protocol code 4418, date of approval 14 May 2021).

Informed consent was obtained from all subjects’ parents, involved in the study.

This study is based on a small cohort of only seven patients in the combined treatment group and only six patients in the nusinersen-only treatment group. This study only measured motor functions 6 months after the combined treatment and therefore only reflects the short-term effects. The long-term effects between the combined treatment and mono-treatment groups need further research. Our personal thanks go to the children and their families, who contributed to our knowledge and made our experience possible. Many challenges, as well as disappointments, tears, but also accomplishments and joys built our work. Special thanks to the physical therapists who performed the tests. Last, but not least, our gratitude goes to some special people: Alessia and Bogdan. 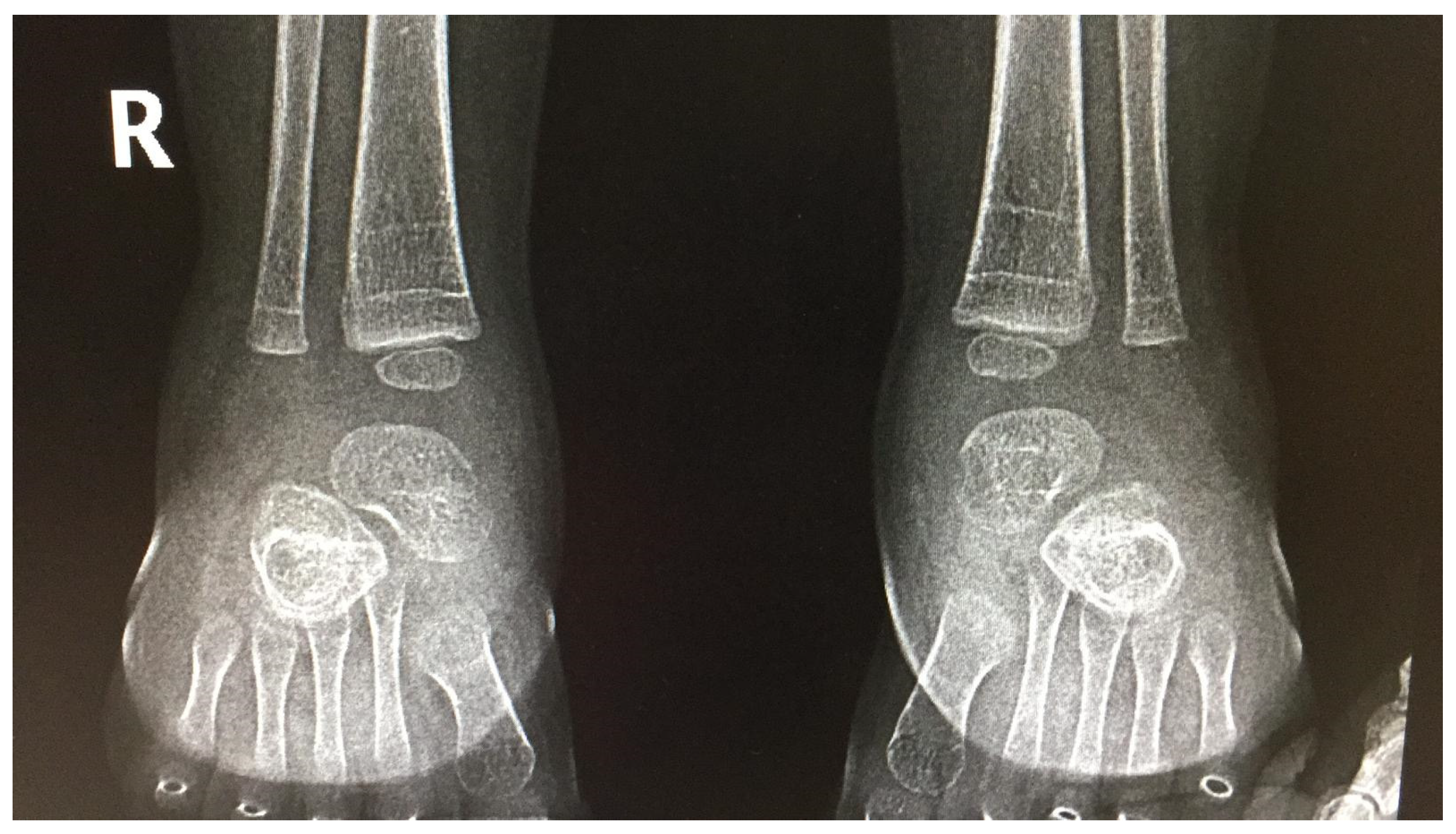 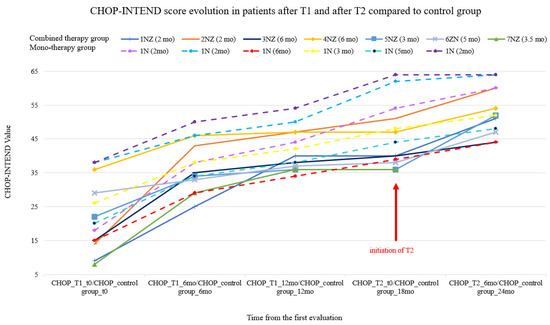 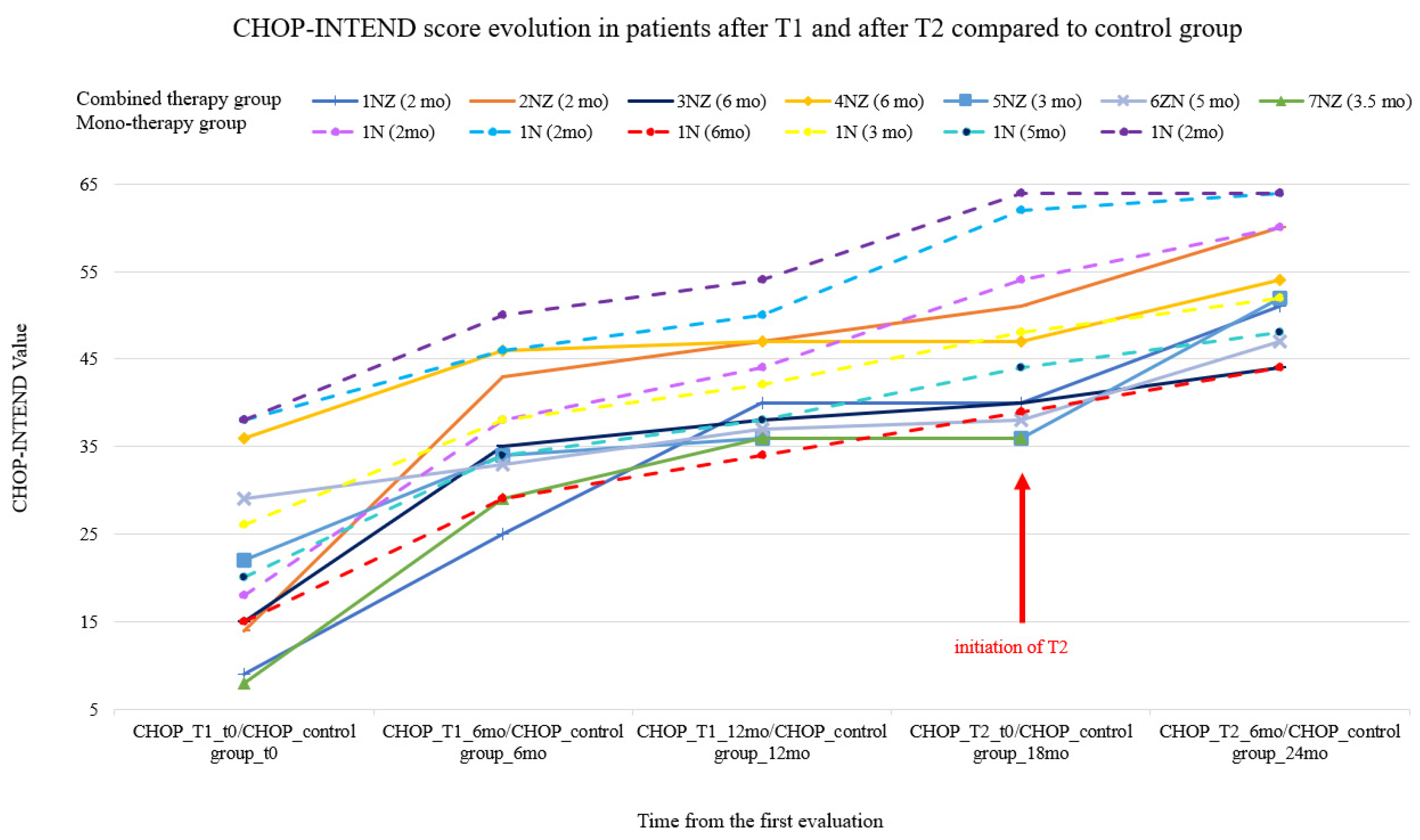