Coronavirus disease 2019 (COVID-19) is a multi-system disease with a wide range of clinical manifestations, from asymptomatic patients to a simple influenza-like illness, or to a fulminant disease comprised of acute respiratory distress syndrome (ARDS) and pulmonary insufficiency [1]. As the understanding of the disease evolved, it was shown that COVID-19 damages epithelial and endothelial cells in numerous tissues leading to SARS-CoV-2 (severe acute respiratory syndrome coronavirus 2)-related multi-organ failure [1,2,3,4]. Previous studies have demonstrated substantial damage to the cardiovascular system with systemic hemodynamic and direct cardiac effects, a negative prognostic sign leading to increased morbidity in individuals with underlying cardiovascular diseases [1,5,6]. Respiratory parameters such as respiratory rate (RR) and blood oxygen saturation (SpO2) are key measurements in the assessment and prognosis of COVID-19 patients [7]. So far, these were carried out by infrequent spot measurements, mainly due to the capabilities of currently used devices.
Novel technologies are leading us to the next generation of care provision, as they broaden the capacity to remotely monitor patients, providing optimized support and protection both for COVID-19 patients and for health care providers by reducing direct contact without compromising the treatment given to isolated patients, as well as lightening the strain on the medical teams and providing early detection of patient deterioration [8,9,10,11,12,13]. Moreover, frequent monitoring of multiple vital physiological parameters may allow better care for patients who are acutely ill, for hospital-at-home of stable patients or those in imminent danger, and early discharge of admitted patients [5,9]. It is also accepted that such a system would be of benefit if it frequently and automatically measures numerous vital signs, improves patient surveillance, and, ultimately, improves patient outcomes [8,14,15,16]. Frequent remote patient monitoring (RPM) systems are potentially better equipped to detect and alert of changes since the vital sign measurements are taken continuously and for longer periods [8,9]. Combining advanced wearable devices with machine learning in various clinical settings may allow reliable detection of changes in population health status, including follow-up of COVID-19 patients and at an earlier stage, helping to control the spread of the pandemic [9,17,18].
Several reports so far have identified differences in COVID-19 infection rates, symptom severity, and mortality between sex, age, and body mass index (BMI) categories [19,20,21,22]; however, whether the physiological response of key cardiovascular and respiratory parameters during the course of hospitalization is different between individuals remains unknown. This knowledge may help in further understanding the clinical course of the disease and preventing clinical deterioration, with highlighted importance due to the rapid deterioration often seen in COVID-19 patients [1].
This retrospective observational multi-center study aimed to determine the trajectory of nine physiological parameters amongst COVID-19 patients admitted to isolation units in Israeli medical centers. A special emphasis was given to characterizing the disease progression among these patients, and to the identification of differences in physiological responses over time of sub-groups according to age, sex, and BMI.

Inclusion criteria were male and female adults above the age of 18 years, with a positive COVID-19 PCR test, admitted to designated COVID-19 isolation units in a moderate to a severe condition as defined by the local health care providers, but with no need for admission in an intensive care unit (ICU). Exclusion criteria were pregnancy, the need for ventilation, and admission to an ICU.

The FDA-cleared chest-monitor device used in this study (Figure 1) utilizes a unique reflective PPG technology, in which specific wavelengths of light are transmitted onto the skin, and the reflected light is collected by a photodiode detector positioned near the light source transmitter. The sensor tracks vital signs derived from changes in the pulse contour, following a simple offset baseline trimonthly calibration process using an approved non-invasive, cuff-based device, and is based on Pulse Wave Transit Time (PWTT) technology combined with Pulse Wave Analysis (PWA) (for error% levels please see validation results in [23,24,25,26]). Patients were monitored throughout hospitalization, and sensors were replaced if hospitalization lasted longer than the 6-day battery life. The same sensors were not used to monitor different patients.

Global outliers were picked using PCA and histogram examination. On a per-patient level, outlier observations with a difference from the mean that was greater than Q3 + 3xIQR were discarded. Differences between the studied groups were determined using an independent t-test when the data satisfied test requirements. Equal variances were assumed if Barlett and Levene’s tests came out significant. Wilcox test was performed for metrics with non-normal distribution. For key physiological variables recorded during the first 2 h of admission, normality was assessed using the Shapiro test QQ-plots, allowing the removal of extreme outliers. Then, differences between groups were determined using repeated-measures ANOVA. Where a significant main effect was found, a Tukey’s post hoc test was performed. The data were fitted to a linear mixed model with nlme 3.1, with sex, age range, and BMI as coefficients, then tested using ANOVA. Pairwise Wilcox was used for post hoc testing when the sample sizes were sufficiently large (n > 50). Trend estimation figures with less than 1000 observations were performed using LOESS, while larger trend data was performed using GAM. All other results are presented as means ± SD. Statistical analyses were considered significant if p < 0.05. All statistical analyses were made using R version 3.6.3 (GBIF.org, Copenhagen, Denmark) [27].

In this retrospective multi-center study, we continuously monitored key vitals amongst hospitalized COVID-19 patients using a non-invasive chest-patch sensor. Early after admission, cardiovascular and respiratory parameters deteriorated in parallel, but significant differences in trajectories were found between age, sex, and BMI groups.
While prior studies employed periodic and infrequent biomarkers and echocardiography focusing on cardiac damage, we used continuous monitoring of advanced cardiac parameters using a novel and non-invasive technology, previously showing its capabilities with similar measurements compared to invasive techniques [28]. By using continuous remote patient monitoring combined with health AI we show early cardiovascular changes in COVID-19 patients. Our findings strengthen the notion that frequently measured vital signs, including advanced cardiovascular parameters such as CO, CI, and SVR, might have future implications in the understanding of the progression of COVID-19 in humans, and in particular in high-risk sub-groups [19,20,21,22].
We found that during the first 24 h from admission the changes in the cardiovascular parameters appeared in parallel to the changes in the respiratory parameters, and were more prominent amongst males, patients older than 80 years, and obese patients. Moreover, the decrease found in DBP throughout most of the monitoring period with a concomitant decrease in CO and CI, and increase in SVR, might correlate with prior reports on diastolic dysfunction resulting from COVID-19 damage to the heart [29,30], yet this hypothesis is still to be validated since we did not perform echocardiography. In parallel to the decrease in the cardiovascular parameters, we found an increased average temperature in males, while lower SpO2 and increased RR were evident in males, elderly patients, and overweight patients. This could also strengthen previous findings that showed patients with pre-existing respiratory and cardiovascular diseases have an increased risk of severe morbidity and mortality [1,19,31,32,33,34,35].
Additional observations were repetitive patterns of HR, SBP, CO, and CI (Figure 3 and Figure 4). This might be part of a circadian rhythm, yet again, we do not have enough data to substantiate this observation, and it should be further studied.
Significant changes between the studied groups were already apparent during the 2-h baseline period, emphasizing that physiological effects of COVID-19 are different among the various groups beyond the expected naturally occurring differences.
Although statistically significant changes were found in some vitals among the groups, they were slight and are currently not considered to be of clinical significance. However, we think that as advanced monitoring tools will keep developing and being introduced into clinical practice, amplified by advanced AI and machine learning analysis tools, we may find that even these slight changes could have significance and warrant clinical attention, especially when developing early warning score systems in the context of complex patients at high risk of deterioration.
Operationally, the small wearable, wireless RPM device continuously and automatically collected and transferred the data, in real-time, to the medical staff. This reduced the direct contact between medical staff and patients without compromising the medical care provided, an important feature highly required during a pandemic. Moreover, by using this technology with COVID-19 patients we now have an opportunity to define a novel COVID-19 score for the accurate early detection of deterioration. This might also serve as an important component of medical care in the ambulatory and out-of-hospital environments, with early identification of symptomatic and pre-symptomatic infected individuals especially valuable during this period [28,36,37,38].
A limitation of this study is that we did not have the clinical data records and outcomes of these patients. All were admitted to isolation units in a moderate to severe condition, and some were later transferred to COVID-19 dedicated ICUs. We have no information regarding outcomes, administration of supplemental oxygen, vasopressors, and specific therapeutics against COVID-19. However, they all received advanced medical care, and the number of data points of multiple physiological parameters collected was large and frequent, still allowing to have insights of clinical significance. Ongoing studies are now conducted to allow the parallel analysis of collected vitals and clinical data records.

Patient consent was waived due to lack of any Personally Identifiable Information and the time elapsed from the monitoring phase.

The datasets generated during and/or analyzed during the current study are available from the corresponding author on reasonable request.

We wish to thank all medical and para-medical staff in the COVID-19 isolation departments for their hard work, personal sacrifice, and life-saving efforts. We thank Yazid Zoabi from Shomron’s Lab at the Sackler Faculty of Medicine, Tel Aviv University, Tel Aviv, Israel, for his assistance.

A.E., A.B.I., E.S., R.M., M.F., and R.L. are employees at Biobeat Technologies Ltd. They all report no additional financial interests. All other authors declare no conflict of interest. 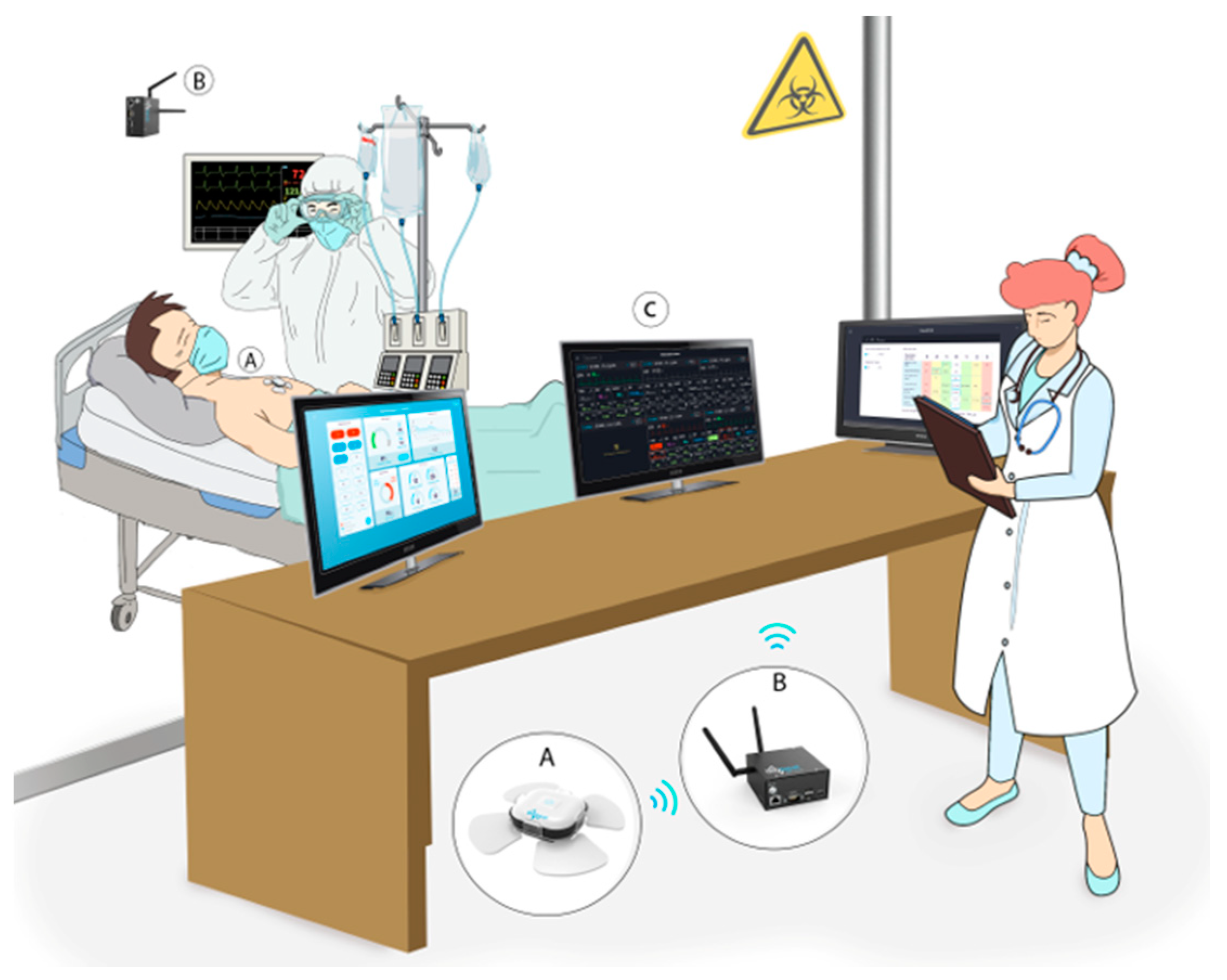 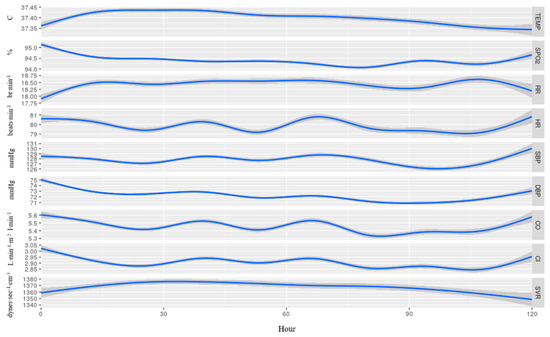