Microvillus inclusion disease (MVID) is a rare enteropathy [1,2]. MVID clinically presents with severe congenital intractable secretory diarrhea, malabsorption and failure to thrive [1,2]. MVID is an autosomal recessive disease associated with bi-allelic mutations in the MYO5B gene [3] or bi-allelic mutations in the STX3 gene [4] in ~95% or ~5% of cases, respectively [5,6]. Symptoms of MVID are also present in some patients diagnosed with familial hemophagocytic lymphohistiocytosis caused by mutations in the STXBP2 gene [5,7], but because of their distinctive hyper-inflammatory symptoms these patients are not diagnosed with MVID.
MVID is uniformly fatal if left untreated. Treatment is only supportive and involves life-long maintenance of nutrition and hydration with total parenteral nutrition (TPN). Prognosis is generally poor, and most patients die within one year after birth, mostly due to sepsis or liver disease [8]. With more case reports being published, it has become clear that the clinical presentation and course of MVID can be heterogeneous. Some patients could even be weaned off TPN [9,10,11]. Because MVID is a difficult to manage disease [12], more information is needed about factors that influence MVID morbidity and mortality.
Recently, Caralli and colleagues [13] noted a relatively high prevalence of preterm births in MVID when compared to other congenital diarrheal disorders. However, their report was based on only twelve cases. Worldwide, preterm birth-associated complications are the leading cause of death among young children [14]. Moreover, preterm birth is associated with gastrointestinal tract immaturity and growth failure, which are key features of MVID [1,15]. Therefore, more data are needed to confirm or refute the high prevalence of preterm birth in MVID, and, if confirmed, determine its significance for MVID morbidity and mortality.

Odds ratios (OR) were calculated as measures of association. Statistical analyses included chi-square test with Yates correction to prevent the overestimation of statistical significance for small data, Pearson’s correlations and Student’s or Welch’s two-tailed t-tests to determine statistical significance, assuming a priori statistical significance when p < 0.05. The Mann–Whitney U test was used for non-normally distributed data sets. Levene’s test was used to determine homogeneity of variances. The Shapiro–Wilk test was used to determine normality. Sex-corrected birth weight percentiles were calculated at https://www.audipog.net/Courbes-morpho. Graphs were generated at https://canva.com/graphs and with MS Excel (2103 (16.0.13901.20400)/accessed on 13 April 2021).
Due to the retrospective nature of this study, data were missing in several variables because of incomplete data recording. Because our aim was to simply describe and compare subgroups of patients with different gestational ages (i.e., preterm versus term), no method for missing data was utilized.

In this retrospective study, study subjects were retrieved from a recently published collection of 131 published MVID cases since 1978 [8], complemented with 44 more recently reported cases [11] and one additional case from the literature search. From this collection of 176 MVID patients, gestational age was documented in 88 cases (Supplemental Table S1) and on average was 35.6 weeks. Preterm birth occurred in 52% (46/88) of these cases without sex preference. This is significantly higher when compared to the world average of 10% (OR 9.42, 95% CI 4.34–20.46, p < 0.0001). Of the preterm births in MVID, 91% (42/46) were categorized as moderate to late preterm birth (33+0–36+6 weeks gestation) (Figure 1A).
Of the preterm births in MVID for which the mode of delivery was documented, 84% (27/32) were spontaneous (that is, without elective labor induction or cesarean section). Medically indicated factors linked to late preterm birth, such as intrahepatic cholestasis during pregnancy, maternal diabetes, placental abruption, placenta previa, hypertension, preeclampsia, intrauterine growth restriction or multiple gestation, were not or rarely reported. Polyhydramnios (defined as an excess amount of amniotic fluid) was reported in 22% (12/55) of MIVD patients, for which the presence or absence of polyhydramnios was documented. However, there was no significant difference in the occurrence of polyhydramnios between preterm and term births in MVID (X2 (1, N = 54) = 0.0443, p = 0.83).
The average birth weight of MVID patients was significantly lower in preterm born patients (2584 ± 612 g versus 3191 ± 485 g (mean ± SD) for preterm and term births, respectively; t (62) = −4.36, p = 0.00005) (Figure 1B). Gestational age positively correlated with birth weight (Figure 1C). Notably, for 58% (19/33) of preterm MVID patients, the average birth weight was within the normal range (2500–4000 g regardless of gestational age). Moreover, when corrected for sex and gestation age, birth weight percentiles for preterm births were significantly higher when compared to term births (70.1 ± 19.9 and 48.3 ± 28.9 (mean ± SD), respectively; t (46) = 2.96, p = 0.005). Forty-one percent (12/29) of preterm birth weights in MVID were above the 80th centile (for term MVID cases this percentage was 12% (2/17)) (OR 5.29, 95% CI 1.02–27.57, p = 0.048) (Figure 1D), albeit still considered as appropriate for gestational age.
Together, MVID is associated with an increased risk of idiopathic preterm birth and a therewith associated higher average birth weight percentile.

3.3. The Impact of Preterm Birth on MVID Morbidity and Mortality

Clinical characteristics of MVID, such as time of onset, extent of diarrhea, TPN dependency, intrahepatic cholestasis, neonatal respiratory distress and time of death display a poorly understood inter-patient heterogeneity [8,11,21]. We next addressed the relationship between these characteristics and preterm birth in MVID.

Preterm born individuals have an immature gastrointestinal tract. Immaturity of the small intestine is a key feature of MVID, and is associated with a secretory phenotype [15]. There was no difference in the time of onset of diarrhea between preterm and term births (t (70) = 0.364, p = 0.36), but a higher average stool output was observed in preterm births when compared to term births (166.5 ± 54 versus 126.26 ± 49.6 mL/kg/day in preterm versus term births, respectively; t (31) = −2.15, p = 0.02) (Figure 3A). All MVID patients required TPN, hence without correlation to gestational age at birth or birth weight percentile. The few reported patients that could be weaned off the TPN were all born at term [9,10]. Preterm birth in MVID thus may have influenced the extent of diarrhea and limited the chance to be weaned off TPN.

A life-threatening extra-intestinal symptom of MVID is intrahepatic cholestasis [21,22,23]. Intrahepatic cholestasis manifests in ~50% of all MVID patients [21]. The etiology of cholestasis in MVID is not clear, but may be caused by the MYO5B mutations carried by the patient and/or may be a complication of the TPN [21,22,23,24]. Although preterm birth in general is linked to a higher risk of neonatal hyperbillirubinia and jaundice due to liver immaturity, the percentage of MVID patients with reported liver disease or jaundice was similar in the preterm and term birth groups (liver disease reported in 55% (12/22) and 45% (10/22) of preterm and term births, respectively).

Data supporting reported results are published with this article. 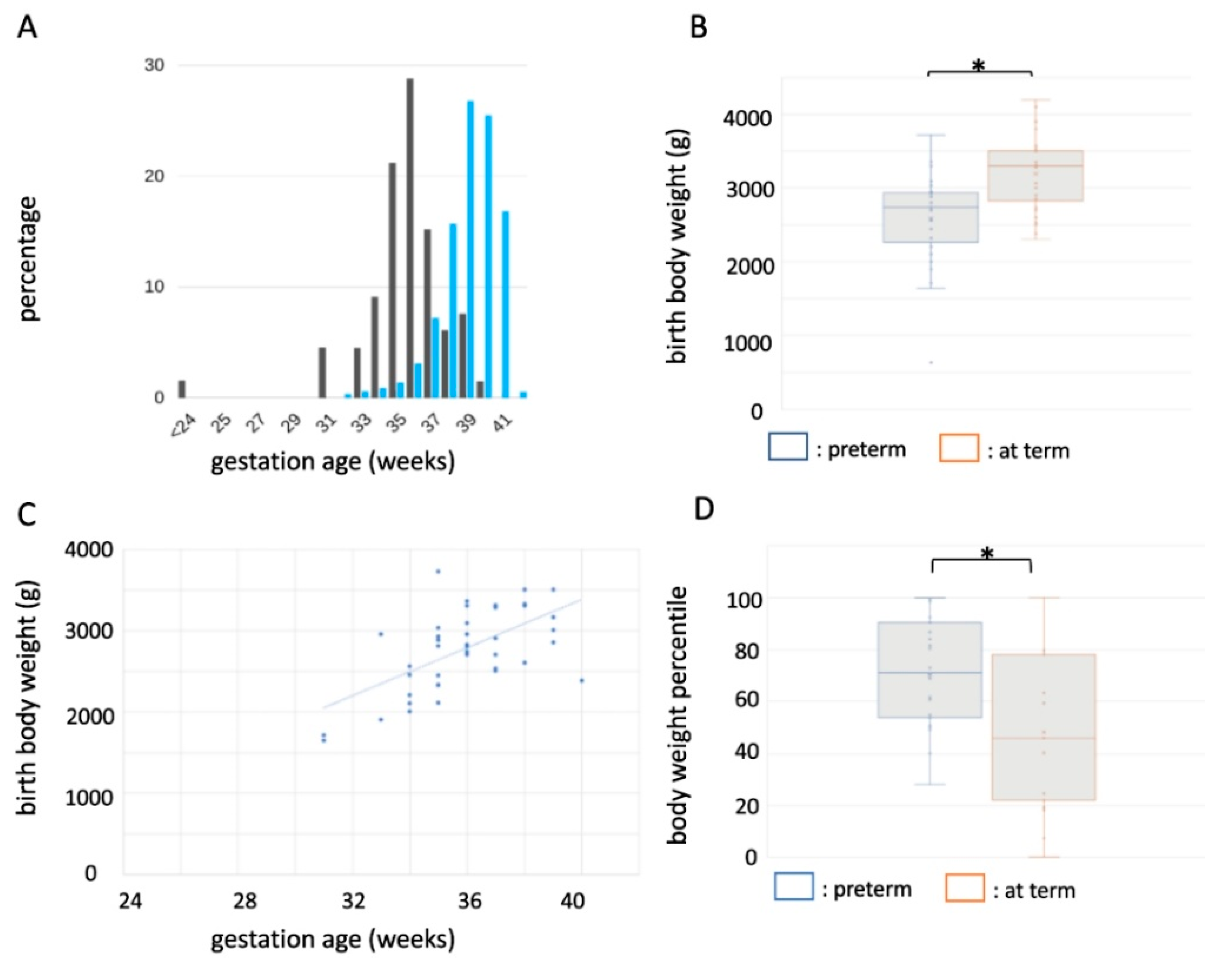 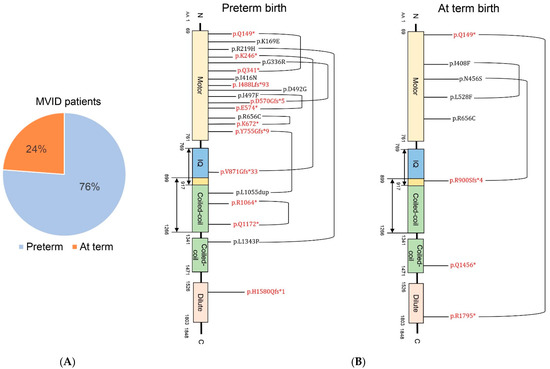