Arterial Hypertension and Diabetes Mellitus in COVID-19 Patients: What Is Known by Gender Differences?
Next Article in Special Issue

Hyperthyroidism in Pregnancy: The Delicate Balance between Too Much or Too Little Antithyroid Drug

Overt hyperthyroidism (HT) during pregnancy is associated with a risk of maternal–fetal complications. Antithyroid drugs (ATD) have a potential risk for teratogenic effects and fetal–neonatal hypothyroidism. This study evaluated ATD treatment and thyroid function control during pregnancy, and pregnancy outcome in women with HT. Patients and methods: A retrospective analysis of 36 single fetus pregnancies in 29 consecutive women (median age 30.3 ± 4.7 years) with HT diagnosed before or during pregnancy; a control group of 39 healthy euthyroid pregnant women was used. Results: Twenty-six women had Graves’ disease (GD, 33 pregnancies), 1 had a hyperfunctioning autonomous nodule, and 2 had gestational transient thyrotoxicosis (GTT). Methimazole (MMI) was administered in 22 pregnancies (78.5%), Propylthiouracil (PTU) in 2 (7.1%), switch from MMI to PTU in 4 (14.2%), no treatment in 8 pregnancies (3 with subclinical HT, 5 euthyroid with previous GD remission before conception). In the 8 pregnancies of GD patients diagnosed during gestation or shortly before (<6 weeks), i.e., with fetal exposure to uncontrolled HT, there was 1 spontaneous abortion at 5 weeks (3.4% of all ATD-treated pregnancies), and 1 premature delivery at 32 weeks with neonatal death in 24 h (3.4%); 1 child had neonatal hyperthyroidism (3.3% of live children in GD women) and a small atrial sept defect (4% of live children in ATD treated women). In women treated more than 6 months until conception (20 pregnancies): (a) median ATD doses were lower than those in women diagnosed shortly before or during pregnancy; (b) ATD was withdrawn in 40% of pregnancies in trimester (T)1, all on MMI < 10 mg/day (relapse in 14.2%), and in up to 55% in T3; (c) TSH level was below normal in 37%, 35% and 22% of pregnancies in T1, T2 and T3 respectively; FT4 was increased in 5.8% (T1) and subnormal in 11.75% in T2 and T3; (d) no fetal birth defects were recorded; one fetal death due to a true umbilical cord knot was registered. Mean birth weight was similar in both ATD-treated and control groups. Hyperthyroidism relapsed postpartum in 83% of GD patients (at median 3 ± 2.6 months). Conclusion: In hyperthyroid women with long-term ATD treatment before conception, drugs could be withdrawn in T1 in 40% of them, the thyroid function control was better, and pregnancy and fetal complications were rarer, compared to women diagnosed during pregnancy. Frequent serum TSH and FT4 monitoring is needed to maintain optimal thyroid function during pregnancy. View Full-Text
Keywords: hyperthyroidism; Graves’ disease; pregnancy; antithyroid drug; drug withdrawal; postpartum recurrence; birth defects hyperthyroidism; Graves’ disease; pregnancy; antithyroid drug; drug withdrawal; postpartum recurrence; birth defects
►▼ Show Figures 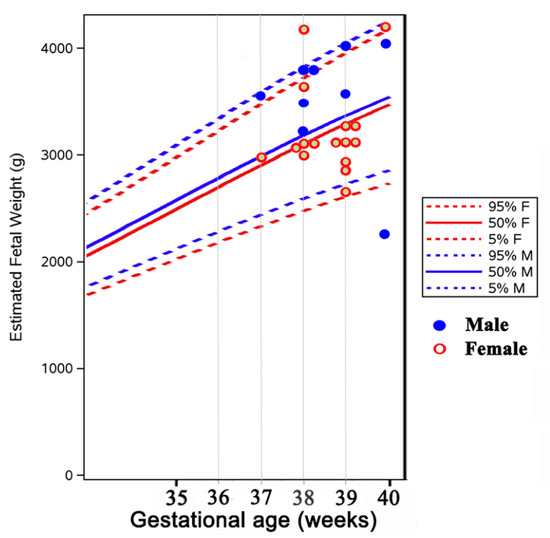