The immunomodulatory effect of Withania somnifera (WS) extract was tested in healthy adults. In this randomized placebo-controlled double-blinded study, subjects were allocated either 60 mg WS extract or placebo. It consists of a blinded 30-day period and an open-label extension study of another 30 days with crossover of only placebo to test. After the 30-day blinded study period, the WS test group reported significant increase (p < 0.05) in Ig’s (IgA, IgM, IgG, IgG2, IgG3 and IgG4), Cytokines (IFN-γ, IL4), TBNK (CD45+, CD3+, CD4+, CD8+, CD19+, NK cells) whereas in the placebo group TBNK cells showed significant decrease (p < 0.05) and Ig’s and cytokines showed no change (p > 0.05). In the extension period on day 60, the subjects on placebo who were crossed over to the WS test group showed significant increase (p < 0.05) in Ig’s, cytokines and TBNK cells and the subjects who continued on the WS group showed a further significant improvement (p < 0.05) in Ig’s, cytokines and TBNK cells. There were no adverse events reported in the study. WS extract significantly improved the immune profile of healthy subjects by modulating the innate and adaptive immune systems. Boosting the immune system of people at risk of infection and during widespread infections can be targeted with WS extract. View Full-Text
Keywords: Withania somnifera; withanolide glycosides; immunomodulation; immunity; Th1–Th2 pathway Withania somnifera; withanolide glycosides; immunomodulation; immunity; Th1–Th2 pathway
►▼ Show Figures 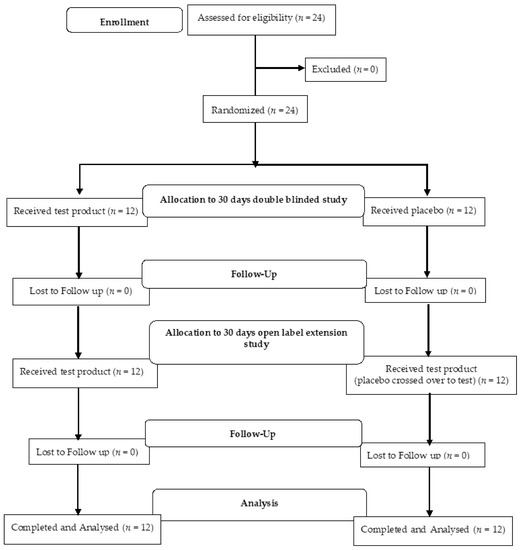