Until now, the simultaneous influence of air pollution assessed by measuring the objective marker of exposition (1-hydroxypirene, 1-OHP) and atopy on the development of allergic airway diseases has not been studied. The aim of this study was to determine the pathomechanism of the allergic response to PM2.5 in atopic and non-atopic patients. We investigated the changes in peripheral blood basophil activity of patients after stimulation with the birch pollen allergen alone, the allergen combined with PM2.5 (BP), PM2.5 alone, a concentration of 1-OHP in urine, and a distance of residence from the main road in 30 persons. Activation by dust alone was positive for all concentrations in 83% of atopic and 75% of non-atopic assays. In the group of people with atopy, the simultaneous activation of BP gave a higher percentage of active basophils compared to the sum of activation with dust and birch pollen alone (B + P) for all concentrations. The difference between BP and B + P was 117.5 (p = 0.02) at a PM concentration of 100 μg. Such a relationship was not observed in the control group. The correlation coefficient between the distance of residence from major roads and urinary 1-OHP was 0.62. A Pearson correlation analysis of quantitative variables was performed, and positive correlation results were obtained in the atopy group between BP and 1-OH-P. Exposure to birch pollen and PM2.5 has a synergistic effect in sensitized individuals. The higher the exposure to pollutants, the higher the synergistic basophil response to the allergen and PM in atopic patients.
Keywords: air pollution; respiratory health; allergic inflammation air pollution; respiratory health; allergic inflammation

Presently, allergies are a public health problem with a pandemic range, especially in industrialized countries. Globally, 400 million people suffer from rhinitis. According to the World Health Organization, the number of patients suffering is 300 million, and with the rising trends, this number is expected to increase to 400 million by 2025. One of the possible factors explaining this phenomenon is growing up and living in conditions of increased air pollution (AP) [1,2]. AP relates to substances emitted above permissible levels in ambient air. According to the available reports, the air quality in the Kraków Agglomeration exceeds the established European concentration norms defined for particulate matter PM10 and PM2.5, as well as benzo[a]pyrene in PM. The main reason for exceedances is surface emission connected with the individual heating of buildings in the communal and household sector, as well as transport emission. A significant share of air pollution in Kraków comes from the inflow from the neighboring communes [3].
Coarse PM, with an aerodynamic diameter of 2.5–10 μm, is mainly deposited in the nose and large conducting airways. Fine PM or PM2.5 deposits particularly in small airways and alveoli. Various individual factors modulate airway distribution and the depositing of PM, such as maturation and integrity of the respiratory tract, general health, and nasal versus oral breathing. Polycyclic aromatic hydrocarbons (PAH), transition metals, and bacterial lipopolysaccharides are constituents of PM of special interest because of their potential to cause oxidative stress, apoptosis response, airway hyper-responsiveness, and airway remodeling [4,5]. Benzo[a]pyrene is a representative of the PAH group. There are some methods of measurement of exposition to PAHs using biomarkers. The most commonly used is 1-hydroxypyrene (1–0HP), the main metabolite of pyrene, which correlates with a pyrene concentration in the air and breathing fraction of PM [6].
An in-depth analysis of the impact of PM exposure on health is still inconclusive based on data from experimental or epidemiological studies. Some studies have investigated the effect of natural exposure to PM2.5 on the health of traffic policeman or employees at trucking terminals, but without an explanation of the mechanism [7,8]. There is a growing body of literature on the mechanistic effect of pollutants on atopic and non-atopic individuals. In general, environmental and occupational pollutants irritate the nasal and bronchial mucosa, leading to the release of inflammatory mediators, which overlaps with the symptomatology of atopic diseases, like allergic rhinitis (AR) or asthma. Pollution can involve the ocular system, although inconsistently and non-specifically. Not all studies are supportive of such pollutant-induced, non-allergic inflammation [5].
Atopic individuals can have different responses to pollutants compared to a non-atopic population. The role of air pollutants in triggering allergies perhaps depends both on the adjuvant effect at the stage of causing sensitization and allergenic provocation leading to the development of an allergic disease. It is now believed that allergens in combination with AP have a greater sensitizing potential [9].
For ethical reasons, it is impossible to perform in vivo provocations with PM in humans, and most studies on its mechanism of action are performed in mice [10]. The basophil activation test (BAT) is an in vitro specific provocation test, which can replace potentially dangerous in vivo provocations [11].
Until now, the simultaneous influence of air pollution assessed by measuring the objective marker of exposition (1-hydroxypirene (1-OHP)) and atopy on the development of allergic airway diseases in the inhabitants of Krakow has not been studied. The aim of this study was to determine the pathomechanism of the allergic response to PM2.5 in adult residents of Kraków. Under experimental conditions, BAT was performed in atopic and non-atopic patients after stimulation with PM2.5 in the presence or absence of birch allergen to see which group is more sensitive.

The study involved 30 patients referred to the Allergy Clinic of the Clinical and Environmental Allergy Center of the University Hospital in Krakow due to suspicion of AR in the winter season, meeting restrictive study inclusion criteria. An allergy interview was collected during the qualification visit, including the question of the distance of residence from the main road (below or above 300 m) and smoking. Skin prick tests (SPTs) with a set of basic inhalant allergens (D. pteronyssinus, D. farinae, cat, dog, grass, cereals, hazel, alder, birch, mugwort, Alternaria tenuis) were performed. Additionally, exfoliative cytology performed in all of the 30 patients confirmed eosinophilic inflammatory infiltrate of the nasal mucosa (percentage of eosinophils among influx cells was greater than 2%). Based on the results of the above tests, patients were assigned to two groups:
The exclusion criteria for the study group allowed for reliable BAT results to be achieved during winter (December/January). The study was approved by the regional scientific ethics committee.

The dust was obtained from the Voivodship Inspectorate for Environmental Protection measuring station in Kraków-Kurdwanów, where it was deposited on a porous cellulose filter (daily filters from the 30-day period in December and January). Dust was separated from the carrier by mechanical separation with the use of an ultrasound, in combination with an inert liquid (isopropanol). This standard liquid was verified in each case, taking both the physical dissolution of certain organic and inorganic substances, as well as the possibility of chemical reactions, into account.

The assessment of basophil activation by measuring CD63 antigen expression was carried out by means of the Flow2 CAST test (Bühlmann Laboratories AG, Schönenbuch, Switzerland). Anti-FcɛRI monoclonal antibodies (antibodies against the high-affinity IgE receptor) were used, and a positive control and stimulation buffer were used as a negative control. Peripheral blood basophils were isolated from whole peripheral blood. Granulocytes were enriched via density gradient centrifugation and processed to remove remaining red blood cells. Isolated cells were characterized by flow cytometry to ensure a highly pure and viable cell population. Basophils were stimulated with original allergen solutions (Bühlmann Laboratories AG, Schönenbuch, Switzerland) in one concentration recommended by the manufacturer: 22.5 ng/mL and/or solutions of PM2.5 in five concentrations: 100 μg/mL, 75 μg/mL, 50 μg/mL, 25 μg/mL, and 12.5 μg/mL (selected in the preliminary experience). A mixture of FITC-conjugated anti-CD63 monoclonal antibodies and PE-conjugated anti-CCR3 antibodies were added to the cellular suspension, and were incubated for 15 min at 37 °C, after which 2 mL of erythrocyte lysing solution was added. The samples were centrifuged, resuspended in 0.3 mL of washing buffer, and analyzed within one hour on a flow cytometer FACS Canto II (BD, Biosciences) with basophils gated as CCR3 +/SSC low cells. The test results were presented as the percentage of activated basophils and stimulation index (SI). SI determines the percentage of basophils activated with an appropriate allergen in relation to the number of basophils activated in the negative control, and is used to describe the reactivity of patients to the allergen. SI ≥ 2 is deemed as a positive result [11].

1.
Particulate matter (PM) 2.5 in atopic and non-atopic people activates basophils of peripheral blood and causes the expression of CD63 receptors on their surface. Dust alone activates basophils in 83% of determinations in atopic people and 75% of determinations in non-atopic people in Kraków.
2.
Exposure to birch pollen and PM2.5 has a synergistic effect in sensitized individuals.
3.
The higher the exposure to pollutants, the higher the synergistic basophil response to the allergen and PM in atopic patients.

The study was conducted according to the guidelines of the Declaration of Helsinki, and approved by regional scientific ethics committee of Jagiellonian University (protocol code 1072.6120.43.2018, date of approval 23 of February 2018).

The data presented in this study are available on request from the corresponding author. The data are not publicly available due to General Data Protection Regulation.

The authors would like to thank Wojciech Dyga for his help in establishing the methodology and conducting the basophil activation test. 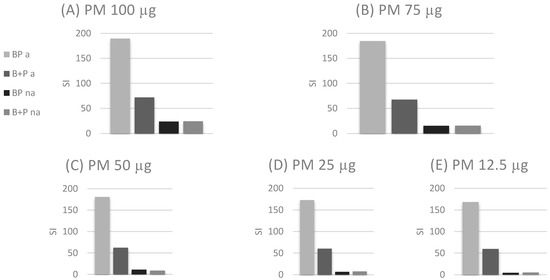 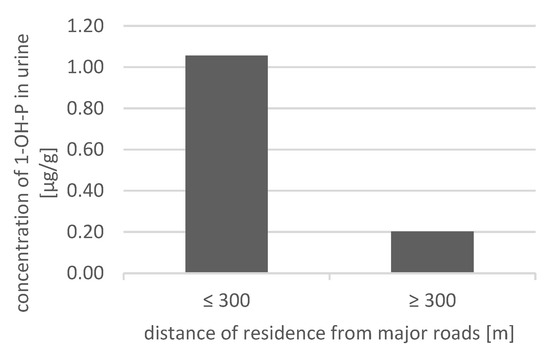 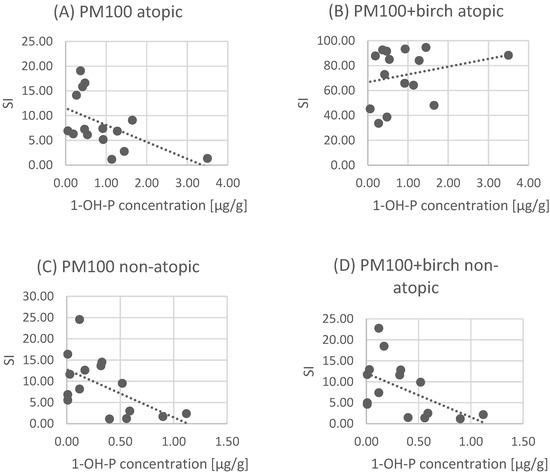 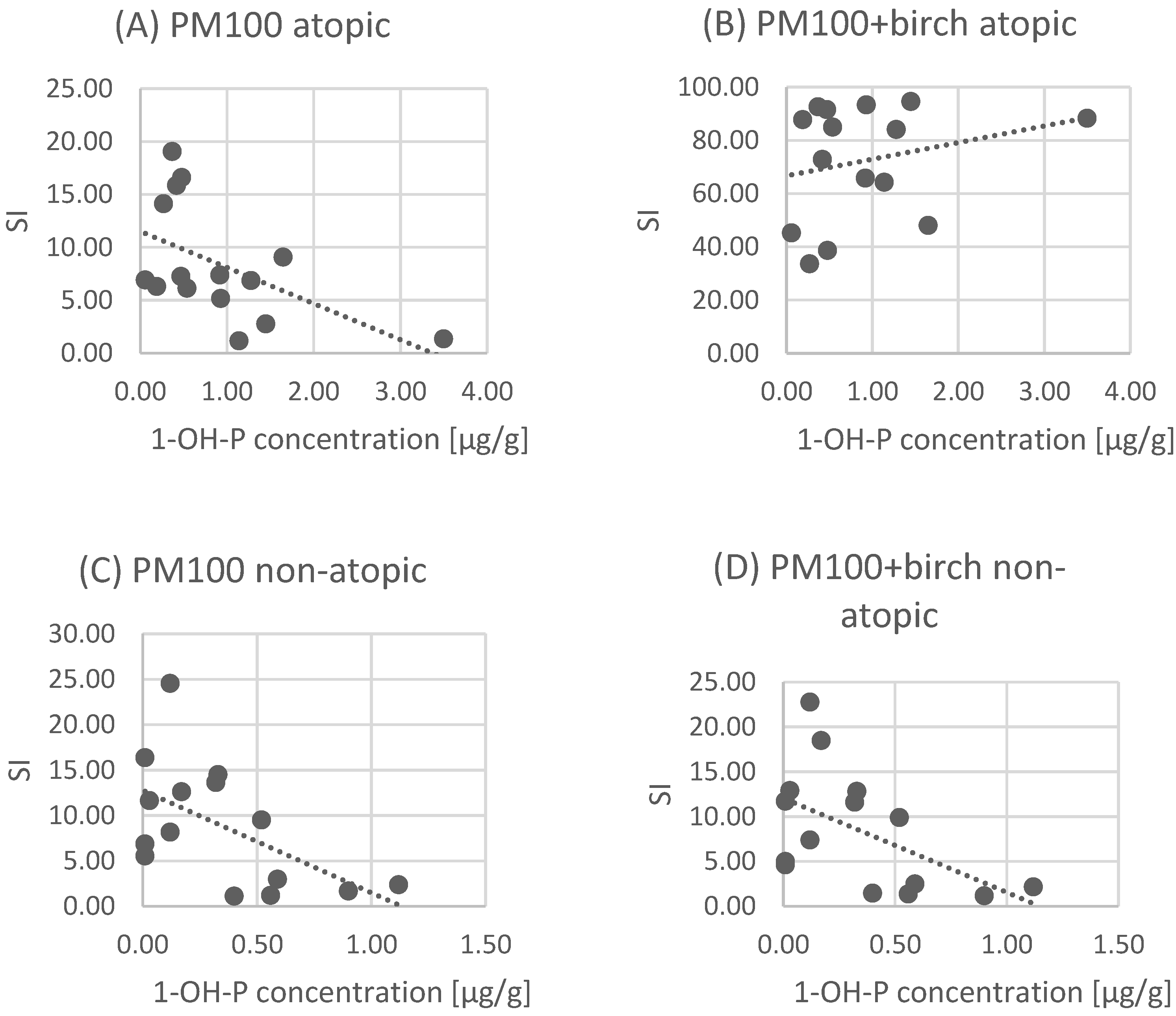