:
We used circular dichroism (CD) to study differences in CD spectra between α-, δ-, and methylated-α-tocopherol in solvents with different polarities. CD spectra of the different tocopherol structures differ from each other in intensity and peak locations, which can be attributed to chromanol substitution and the ability to form hydrogen bonds. In addition, each structure was examined in different polarity solvents using the Reichardt index—a measure of the solvent’s ionizing ability, and a direct measurement of solvent–solute interactions. Differences across solvents indicate that hydrogen bonding is a key contributor to CD spectra at 200 nm. These results are a first step in examining the hydrogen bonding abilities of vitamin E in a lipid bilayer.
Keywords:
Vitamin E; α-tocopherol; δ-tocopherol; methylated tocopherol; circular dichroism; reichardt’s dye

Viamin E is a liposoluble antioxidant, commonly understood to protect cell membranes from peroxidation reactions. Although rare, Vitamin E deficiency has been shown to lead to infertility [1] and neuromuscular dysfunction [2]. In industry, tocopherol acetate is extensively used as a preservative in cosmetics and foods. Vitamin E consists of three families comprised of as many as 12 compounds, differing primarily in their chromanol ring structure (α, β, γ, δ homologues, Figure 1 Schemes 1–4) and side-chain saturation (e.g., 5–6). Tocopherols have a fully saturated side-chain, tocotrienols have a isoprenoid derived side chain with three double bonds [3], and tocomonoenols contain a single site of unsaturation either at the isoprenoid chain terminus or along the isoprenoid chain itself [4]. The most common chromanol ring homologues differ in the methylation at two points on the chromanol ring, although single and non-methylated chromanols have also been found in nature [5]. Although all 12 members of Vitamin E have commonalities, and are all found in our diets, only α-tocopherol is taken up by the human anatomy for use.
Despite our extensive understanding of tocopherol’s oxidation chemistry, α-tocopherol’s (aToc) actual molecular role in the human body is still being debated. For example, Traber and Atkinson recently wrote that “all of the observations concerning the in vivo mechanism of action result from its role as a potent lipid-soluble antioxidant” [6], while Azzi makes the counter argument that “α-tocopherol is not able, at physiological concentrations, to protect against oxidant-induced damage” [7]. We believe that this ongoing debate regarding vitamin E’s biological role is the result of conflicting—and sometimes misinterpreted—data.
It is well known that tocopherol incorporates itself into lipid membranes. Recently, Marquardt et al. reported on the location of aToc in a variety of phospholipid bilayers of differing composition (Figure 2) and its potential antioxidant capabilities using neutron diffraction, NMR spectroscopy, and UV/vis absorbance [8,9,10,11]. However, due to the disordered nature of phospholipid bilayers [12], the large biological diversity of phospholipids, and the high phospholipid concentration required, the circular dichroism (CD) of tocopherol inside bilayers was not investigated.
In order to address this problem, we selected a number of common organic solvents (methanol ( = 55.4), isopropanol ( = 48.4), and hexane ( = 31)) which mimic the bilayer’s environment in the direction along the bilayer normal (i.e., perpendicular to the plane of the bilayer). We can then relate the observed specta to locations in the membrane in which aToc could reside, as shown in Figure 3. The polarity index utilized is an established method for measuring the polarity of solvents, and is based on the absorbance of Reichardt’s dye [13]. Previous work has been done on the assignment of values to different parts of a phosphatidylcholine (PC) phospholipid bilayer [14].
CD is a powerful technique that probes the asymmetric configuration of electronic transitions of optically active molecules. Tocopherols have three chiral centers at carbons C-2, C-4’, and C-8’, and tocotrienols have one chiral center at carbon C-2. The naturally occurring stereoisomer has a configuration 2R,4’R,8’R, originally named (+)-α-tocopherol. The epimer at the C-2 position can be obtained by a racemic or total synthesis, and was previously called (-)-α-tocopherol. Synthesis without stereochemical control produces all-rac-α-tocopherol. After purification, CD is used to determine the isomer of biomolecules obtained either through synthetic means or natural extraction [16].
A few CD spectra of tocotrienols, tocopherols, and tocopherol esters have been published over the years; however, to the best of our knowledge, there are no published electronic CD spectra of α-tocopherol, the most biologically active member of the vitamin E family [5,17]. In addition, there has been only one study in the mid-UV region (190–220 nm), where features of the CD signal increase significantly. Furthermore, there is a reported solvent dependence of the optical rotation of aToc that has not been explored since the original report by Baxter in 1943 [18].
Since tocopherol resides in cell membranes made up primarily of lipids and proteins, it may experience a range of polarities as it explores the membrane’s hydrophobic interior, including the polar water environment just outside of the membrane. We have recently determined that aToc is located at different positions in a model lipid bilayer, depending on the chemical composition of the bilayer. Three key locations were identified regarding aToc’s active oxygen, namely: (i) above the glycerol backbone and among the PC headgroups; (ii) close to the glycerol backbone; and (iii) at the centre of the phospholipid bilayer.
In this study, we make use of the chiral nature of RRR-α-tocopherol (aToc) and δ-tocopherol (dToc) in order to determine the conformational differences of these molecules in solvents of varying polarity, by means of synchrotron vacuum UV CD. The intensity of synchrotron radiation allows us to use solvents with a higher UV cutoff, and enables one to more accurately compare spectra in the far UV. The data show a modest solvent dependence associated with conformational changes of aToc and dToc, indicating that the conformation adopted by the C-2 chiral center depends on the polarity of the solvent. We also include the methylated analogue of aToc, effectively removing any influence that the hydroxyl group may have on the molecular configuration in the different polarity solvents.

All solvents were of reagent grade, and were used without any further purification. (+)-α-tocopherol (aToc) was purchased from Cole-Parmer (Vernon Hills, IL, USA). δ-tocopherol (dToc) was purchased from Sigma, and was purified on silica, eluting with 9:1 hexane:ethyl acetate. The (R)-6-methoxy-2,5,7,8-tetramethyl-2-((4R,8R)-4,8,12-trimethyltridecyl)chroman (MeOaToc) was prepared by adding sodium hydride (60% in mineral oil; 42 mg, 0.95 mmol) at room temperature in three aliquots to a solution of alpha-tocopherol (R,R,R) (450 mg, 0.95 mmol) in dry tetrahydrofuran (THF) (3 mL) under nitrogen atmosphere. After 10 min, methyl iodide (148.5, 0.95 mmol) was added at 40 C, and stirred for 2 h under nitrogen atmosphere. The reaction was quenched with water and extracted three times with dichloromethane. The organic phases were combined and dried over anhydrous sodium sulfate. The crude product was purified by chromatography on silica gel, using an elution gradient of hexane/ethyl acetate 6:1 to 1:1, which afforded 250 mg (54%) product. Based on mass spectroscopy, H NMR and thin layer chromatography (TLC) plating, the purtiy is estimated >95%.
In order to measure the CD spectra at higher photon energies, CD data were collected at the National Synchrotron Light Source U11 beam-line located at the Brookhaven National Laboratory (Upton, New York, NY, USA). Samples were made to a concentration ∼1 mg/mL, which allowed for the optimal absorbance of 1 at 200 nm. The samples were then injected into a custom-made cylindrical cuvette of pathlength 40 m (Brock University, St. Catharines, ON, Canada). The windows of the cuvette were constructed of , allowing for data to be collected in the deep UV. Scans used a time constant 5 s and bandwidth of 1 nm from a Wadsworth monochromator.
CD spectra were measured on a Jasco J-600 CD spectrometer using 1 mm quartz cuvette (λ = 500 nm–220 nm) with a sensitivity of 10 mdeg, a bandwidth of 2 nm, and a scan rate of 50 nm/min. Tocopherol concentrations varied from 1–2 mg/mL for the optimal absorbance. UV/vis absorbance measurements were performed on a Ocean Optics USB4000 using a ISIS light source. Concentrations of tocopherol samples were confirmed by the UV/Vis absorbance at 290 nm.

This project was supported by National Science and Engineering Research Council of Canada (NSERC). Use of the National Synchrotron Light Source, Brookhaven National Laboratory, was supported by the U.S. Department of Energy, Office of Science, Office of Basic Energy Science, under Contract No. DE-AC02-98CH10886. D.M. acknowledges support the of the OGSST QE II scholarship and the NSERC Vanier Canadian Graduate Scholarship. T.A.H. gratefully acknowledges support from the Research Corporation through the Cottrell College Science Award, and would like to thank Madeleine Nolan for her assistance. All authors would like to thank the Brock University Machine shop for the construction of the adjustable cuvettes. 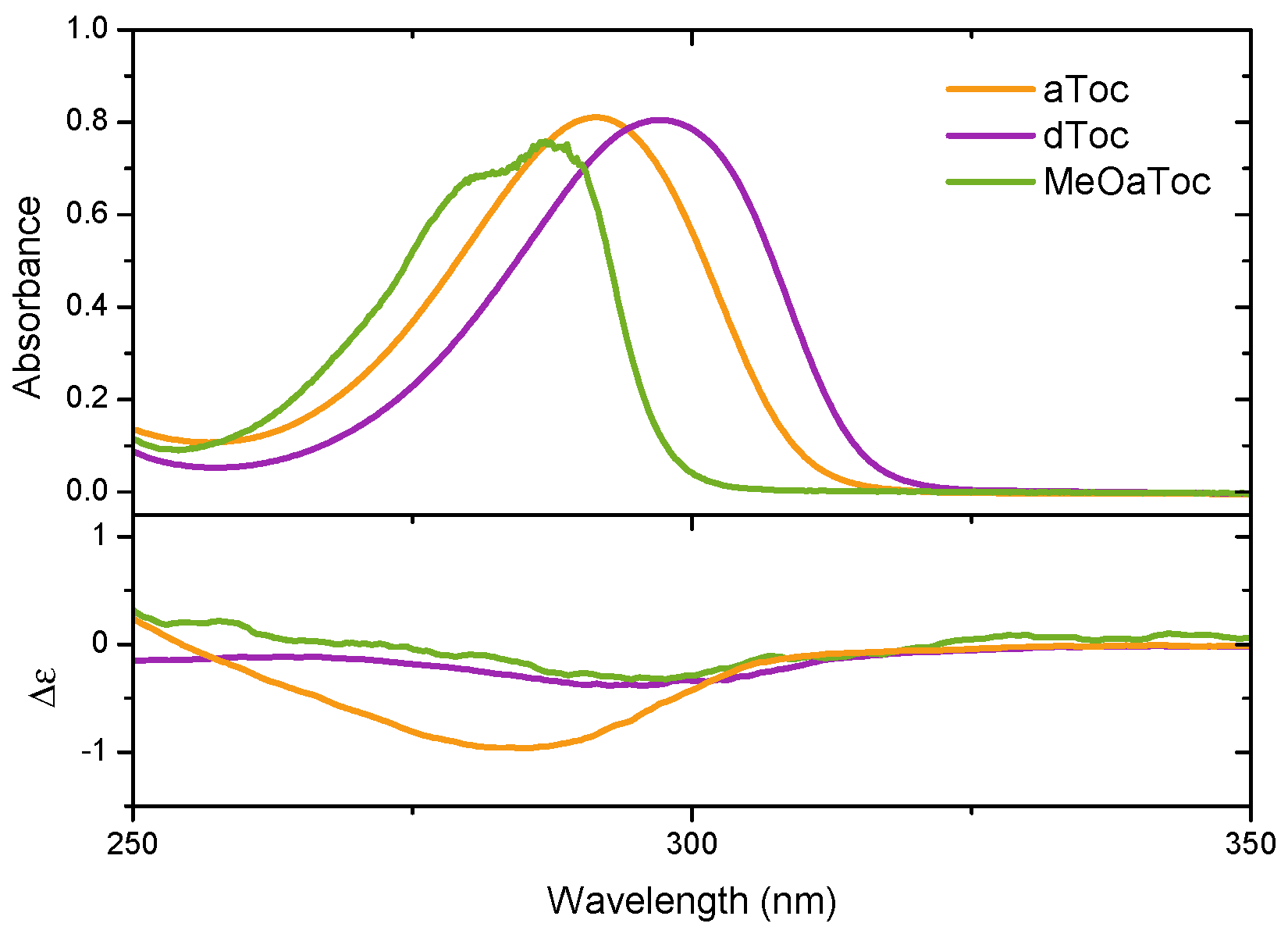