In recent years, electrochemical methods utilizing reactive electrochemical membranes (REM) have been considered as a promising technology for efficient degradation and mineralization of organic compounds in natural, industrial and municipal wastewaters. In this paper, we propose a two-dimensional (2D) convection-diffusion-reaction model concerning the transport and reaction of organic species with hydroxyl radicals generated at a TiOx REM operated in flow-through mode. It allows the determination of unknown parameters of the system by treatment of experimental data and predicts the behavior of the electrolysis setup. There is a good agreement in the calculated and experimental degradation rate of a model pollutant at different permeate fluxes and current densities. The model also provides an understanding of the current density distribution over an electrically heterogeneous surface and its effect on the distribution profile of hydroxyl radicals and diluted species. It was shown that the percentage of the removal of paracetamol increases with decreasing the pore radius and/or increasing the porosity. The effect becomes more pronounced as the current density increases. The model highlights how convection, diffusion and reaction limitations have to be taken into consideration for understanding the effectiveness of the process. View Full-Text
Keywords: reactive electrochemical membrane; porous electrode; anodic oxidation; hydroxyl radicals reactive electrochemical membrane; porous electrode; anodic oxidation; hydroxyl radicals
►▼ Show Figures 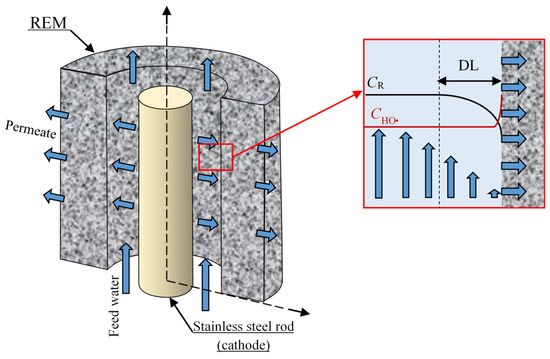