African swine fever (ASF) is, once more, spreading throughout the world. After its recent reintroduction in Georgia, it quickly reached many neighboring countries in Eastern Europe. It was also detected in Asia, infecting China, the world’s biggest pig producer, and spreading to many of the surrounding countries. Without any vaccine or effective treatment currently available, new strategies for the control of the disease are mandatory. Its etiological agent, the African swine fever virus (ASFV), has been shown to code for a type II DNA topoisomerase. These are enzymes capable of modulating the topology of DNA molecules, known to be essential in unicellular and multicellular organisms, and constitute targets in antibacterial and anti-cancer treatments. In this review, we summarize most of what is known about this viral enzyme, pP1192R, and discuss about its possible role(s) during infection. Given the essential role of type II topoisomerases in cells, the data so far suggest that pP1192R is likely to be equally essential for the virus and thus a promising target for the elaboration of a replication-defective virus, which could provide the basis for an effective vaccine. Furthermore, the use of inhibitors could be considered to control the spread of the infection during outbreaks and therefore limit the spreading of the disease. View Full-Text
Keywords: topoisomerase II; African swine fever; ASFV; vaccine; replication-defective topoisomerase II; African swine fever; ASFV; vaccine; replication-defective
►▼ Show Figures 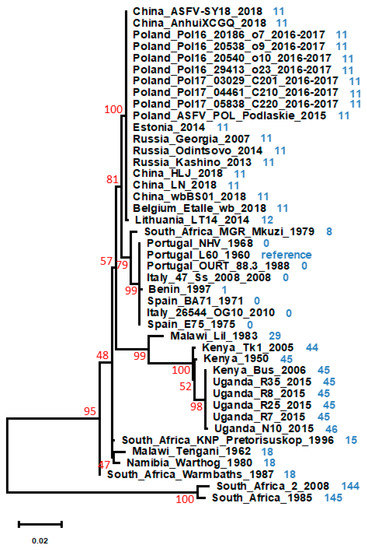