Impact of Influenza Vaccination on All-Cause Mortality and Hospitalization for Pneumonia in Adults and the Elderly with Diabetes: A Meta-Analysis of Observational Studies
Next Article in Special Issue

Live attenuated vaccines are considered to be the fastest route to the development of a safe and efficacious African swine fever (ASF) vaccine. Infection with the naturally attenuated OURT88/3 strain induces protection against challenge with virulent isolates from the same or closely related genotypes. However, adverse clinical signs following immunisation have been observed. Here, we attempted to increase the OURT88/3 safety profile by deleting I329L, a gene previously shown to inhibit the host innate immune response. The resulting virus, OURT88/3ΔI329L, was tested in vitro to evaluate the replication and expression of type I interferon (IFN) and in vivo by immunisation and lethal challenge experiments in pigs. No differences were observed regarding replication; however, increased amounts of both IFN-β and IFN-α were observed in macrophages infected with the deletion mutant virus. Unexpectedly, the deletion of I329L markedly reduced protection against challenge with the virulent OURT88/1 isolate. This was associated with a decrease in both antibody levels against VP72 and the number of IFN-γ-producing cells in the blood of non-protected animals. Furthermore, a significant increase in IL-10 levels in serum was observed in pigs immunised with OURT88/3ΔI329L following challenge. Interestingly, the deletion of the I329L gene failed to attenuate the virulent Georgia/2007 isolate. View Full-Text
Keywords: African swine fever virus; interferon; I329L; vaccine African swine fever virus; interferon; I329L; vaccine
►▼ Show Figures 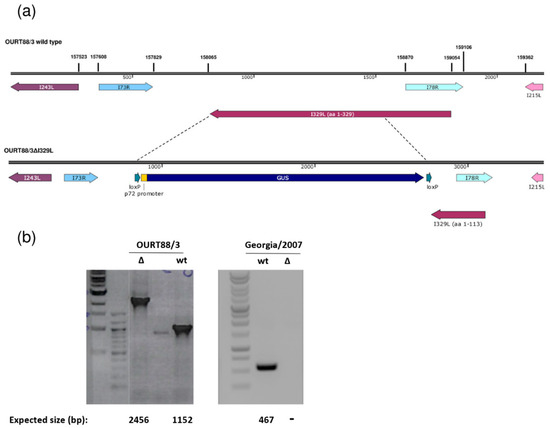