Vaccination against tick-borne encephalitis (TBE) is based on the use of formalin-inactivated, culture-derived whole-virus vaccines. Immune response following vaccination is primarily directed to the viral envelope (E) protein, the major viral surface antigen. In Europe, two TBE vaccines are available in adult and pediatric formulations, namely FSME-IMMUN® (Pfizer) and Encepur® (GlaxoSmithKline). Herein, we analyzed the content of these vaccines using mass spectrometry (MS). The MS analysis revealed that the Encepur vaccine contains not only proteins of the whole virus particle, but also viral non-structural protein 1 (NS1). MS analysis of the FSME-IMMUN vaccine failed due to the high content of human serum albumin used as a stabilizer in the vaccine. However, the presence of NS1 in FSME-IMMUN was confirmed by immunization of mice with six doses of this vaccine, which led to a robust anti-NS1 antibody response. NS1-specific Western blot analysis also detected anti-NS1 antibodies in sera of humans who received multiple doses of either of these two vaccines; however, most vaccinees who received ≤3 doses were negative for NS1-specific antibodies. The contribution of NS1-specific antibodies to protection against TBE was demonstrated by immunization of mice with purified NS1 antigen, which led to a significant (p < 0.01) prolongation of the mean survival time after lethal virus challenge. This indicates that stimulation of anti-NS1 immunity by the TBE vaccines may increase their protective effect. View Full-Text
Keywords: tick-borne encephalitis; vaccination; NS1; vaccine; flavivirus tick-borne encephalitis; vaccination; NS1; vaccine; flavivirus
►▼ Show Figures 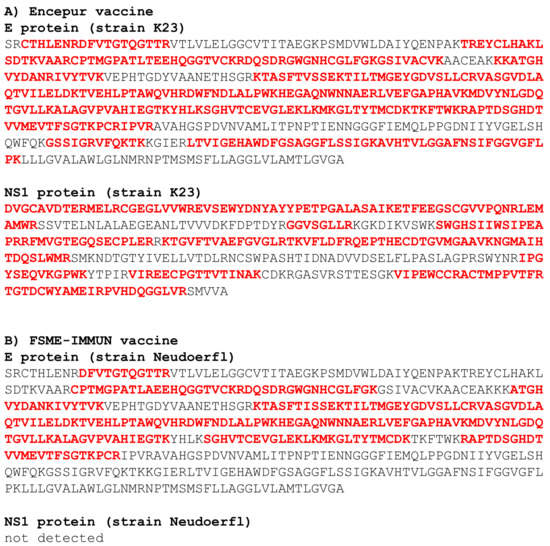