Every year, several epizooties of equine influenza (EI) are reported worldwide. However, no EI case has been identified in France between 2015 and late 2018, despite an effective field surveillance of the pathogen and the disease. Vaccination against equine influenza virus (EIV) remains to this day one of the most effective methods to prevent or limit EI outbreaks and the lack of detection of the pathogen could be linked to vaccination coverage. The aim of this study was to evaluate EI immunity and vaccine coverage in France through a large-scale serological study. A total of 3004 archived surplus serums from French horses of all ages, breeds and sexes were selected from four different geographical regions and categories (i.e., sanitary check prior to exportation, sale, breeding protocol or illness diagnosis). EIV-specific antibody response was measured by single radial hemolysis (SRH) and an EIV-nucleoprotein (NP) ELISA (used as a DIVA test). Overall immunity coverage against EIV infection (i.e., titers induced by vaccination and/or natural infection above the clinical protection threshold) reached 87.6%. The EIV NP ELISA results showed that 83% of SRH positive serum samples from young horses (≤3 years old) did not have NP antibodies, which indicates that the SRH antibody response was likely induced by EI vaccination alone (the HA recombinant canarypoxvirus-based EI vaccine is mostly used in France) and supports the absence of EIV circulation in French horse populations between 2015 and late 2018, as reported by the French equine infectious diseases surveillance network (RESPE). Results from this study confirm a strong EI immunity in a large cohort of French horses, which provides an explanation to the lack of clinical EI in France in recent years and highlights the success of vaccination against this disease. However, such EI protection has been challenged since late 2018 by the incursion in the EU of a Florida Clade 1 sub-lineage EIV (undetected in France since 2009), which is also reported here. View Full-Text
Keywords: equine influenza virus; horse; vaccination; immune coverage; DIVA test; surveillance; epizooty; Florida Clade 1 (FC1) equine influenza virus; horse; vaccination; immune coverage; DIVA test; surveillance; epizooty; Florida Clade 1 (FC1)
►▼ Show Figures 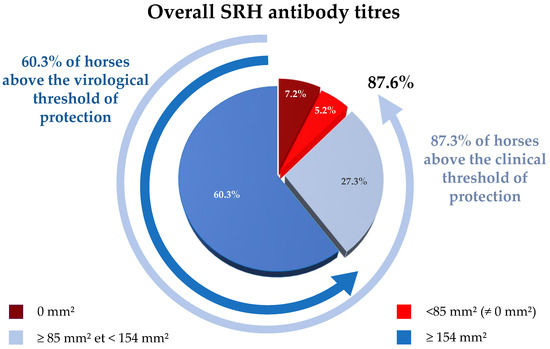