We aimed to evaluate the safety of maternal Tdap; thus, we assessed health events by examining the difference in birth and hospital-related outcomes of infants with and without fetal exposure to Tdap. This was a retrospective cohort study using linked administrative datasets. The study population were all live-born infants in New Zealand (NZ) weighing at least 400 g at delivery and born to women who were eligible for the government funded, national-level vaccination program in 2013. Infants were followed from birth up to one year of age. There were a total of 69,389 eligible infants in the cohort. Of these, 8299 infants were born to 8178 mothers exposed to Tdap (12%), primarily between 28 and 38 weeks gestation as per the national schedule. Among the outcomes, we found a reduced risk for moderate to late preterm birth, low birth weight, small for gestational age, large for gestational age, respiratory distress syndrome, transient tachypnea of newborn, tachycardia or bradycardia, haemolytic diseases, other neonatal jaundice, anaemia, syndrome of infant of mother with gestational diabetes, and hypoglycemia in infants born to vaccinated mothers. There was no association between maternal Tdap, infant Apgar score at 5 min after birth, asphyxia, sepsis or infection, or hypoxic ischemic encephalopathy. Infant exposure to Tdap during pregnancy was associated with a higher mean birthweight (not clinically significant) and higher odds for ankyloglossia and neonatal erythema toxicum diagnoses. There were insufficient observations to allow examination of the effect of Tdap on extreme preterm and very preterm birth, and stillbirth, infant death, or microcephaly. Overall, we found no outcomes of concern associated with the administration of Tdap during pregnancy. NZ Health and Disability Ethics Committee Approval #14/N.T.A/169/AM05. View Full-Text
Keywords: post-marketing surveillance; vaccine safety; pertussis; Tdap; pregnancy; infant post-marketing surveillance; vaccine safety; pertussis; Tdap; pregnancy; infant
►▼ Show Figures 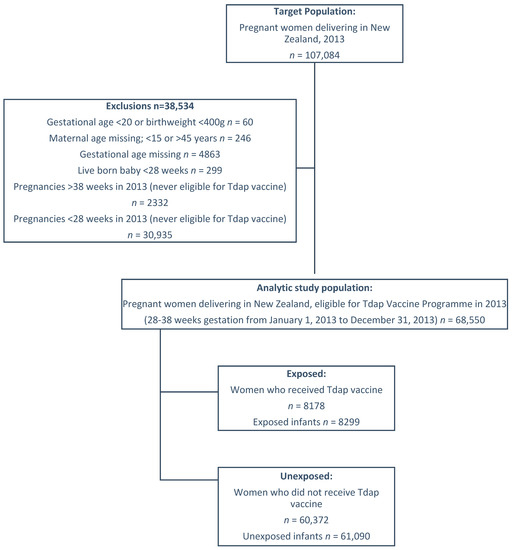