Anthocyanins: From the Field to the Antioxidants in the Body

The growing consumer interest in organic foods, as well as, in many cases, the inconclusiveness of the research comparing organic and conventional foods, indicates a need to study this issue further. The aim of the study was to compare the effects of meat origin (conventional vs. organic) and selected elements of the pork carcass (ham, loin, and shoulder) on the meat proteome and the antioxidant potential of its peptides. The peptidomic approach was used, while the ability of antioxidants to scavenge 2,2′-azino-bis-3-ethylbenzthiazoline-6-sulfonic acid (ABTS), to chelate Fe(II) ions, and to reduce Fe(III) was determined. Most peptides were derived from myofibrillary proteins. The meat origin and the element of the pork carcass did not have a significant effect on the proteome. On the other hand, the pork origin and the carcass element significantly affected the iron ion-chelating capacity (Fe(II)) and the reducing power of peptides. In particular, pork ham from conventional rearing systems had the best antioxidant properties in relation to potential antioxidant peptides. This could be a factor for human health, as well as for stabilized meat products (e.g., toward lipid oxidation). View Full-Text
Keywords: antioxidant peptides; element of pork carcasses; spectrometric analysis antioxidant peptides; element of pork carcasses; spectrometric analysis
►▼ Show Figures 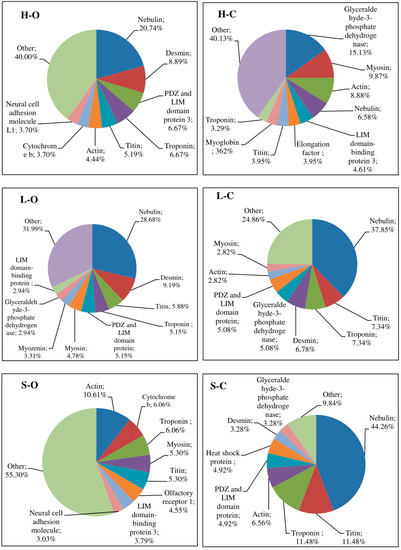