Antioxidants in Down Syndrome: From Preclinical Studies to Clinical Trials
Previous Article in Special Issue

Bovine Mastitis is characterized by the inflammation of the mammary gland that occurs in response to several different stimuli, such as microorganism infection [1]. The udders of infected cows are one of the major reservoir of contagious pathogens. During milking they spread from cow to cow, inducing chronic subclinical infections. Contagious pathogens include: Streptococcus agalactiae, Staphylococcus aureus, Corynebacterium bovis and Mycoplasma spp. [2]. Differently, environmental mastitis is defined as intramammary infections caused by pathogens of the environment in which the cow lives [3]. Environmental pathogens include Klebsiella spp., Escherichia coli, Streptococcus uberis and Streptococcus dysgalactiae. Most those infections are characterized by a short duration [4].
Moreover, mastitis influences yield, composition and quality of the milk produced by the affected cow and represents a serious economic issue for the farmer [5]. In particular, it often leads to culling of chronically infected cows and occasional deaths [6]. The use of antibiotics is a consolidate pharmacological approach for mastitis treatment that results in several side effects [7]. New studies into pharmacological approaches for the treatment of this pathology is required for reducing the use of antibiotics that are dangerous for health of consumers and antibiotic resistance spread [7,8]. Nowadays, several natural molecules or derivates has been tested for the treatment of bovine mastitis [9]. Natural molecules are preferred thanks to their safer use for both the animal and its derivatives [10,11,12]. Interesting results have been obtained from antioxidant natural compounds such as baicalein [13], moringa extract [14] and curcumin [15].
There is a well consolidated crosstalk between inflammation and oxidative stress. Recent evidences have shown the beneficial effects of the antioxidant therapy in several pathologies [8,16,17,18,19,20,21,22]. A key role for oxidative stress in bovine mastitis is widely recognized: dietary supplementation with antioxidant nutrients has shown protective action and improvement of immune resistance against infections [23,24]. Oxidative stress in early lactation cows plays a central role in dysfunctional inflammatory response [25]. Additionally, during the periparturient period there is an increase in the production of the reactive oxygen species. The free radicals produced induce a positive feedback which can further aggravate the pathologic condition [26]. Hydroxytyrosol (3,4-dihydroxyphenylethanol, HT) is a polyphenol mainly present in the fruit and in the leaf of Olea europaea L., a plant belonging to the Oleaceae family. This plant family comprises numerous different species distributed throughout the Mediterranean basin. HT is also the main component of extra virgin olive oil: it is present in esterified or free form and it represents the 70–80% of the total phenolic fractions [27]. High HT contents have been found in the olive leaf extract and in olive mill waste water, making it a potentially useful waste product [28]. Several works describe the antioxidant properties of HT [29]: its antioxidant power is two times higher than coenzyme Q10 and ten times higher than green tea [30]. Additionally, numerous biologic activities have been ascribed to HT, although in some cases its mechanism of action has not been clarified. Of particular interest are the anti-inflammatory and antimicrobial properties of HT, which have been described in many diseases [28,31,32,33,34,35,36]. In particular, it has been reported that HT was able to inactivate the staphylococcal enterotoxin A, a key factor in the patho-physiology of animal mastitis [37]. Therefore, the application of HT in the treatment or prevention of bovine mastitis would be an interesting therapeutic strategy.
Bovine mammary epithelial cell lines, like mammary alveolar (MAC-T) cells, are one of the most used cell lines to study inflammation, lipid metabolism and apoptosis [38,39,40,41]. In particular, MAC-T cells represent a convenient validation system for investigating lactation and bioactive substances with the mammary tissue-specific casein promoter [42]. For this process to happen, the mammary gland grows and differentiates through extensive tissue remodeling. When treated with prolactin, insulin and retinoic acid this cell line differentiates into β-casein–secreting cells [43]. In this study, we investigated the effect of HT on lipopolysaccharide-induced inflammation and oxidative stress in bovine mammary epithelial (MAC-T) cells.

MAC-T cell were detached with 0.25% of trypsin-ethyl-enediaminetetraacetic acid (Sigma-Aldrich, Milano, Italy). The initial number of cells in each group was 5 × 104 cells/well in a 6-well plate and cultured for 4 days, and then the cells in each group were split on additional 6-well plates on 4 and 5 days. MAC-T cells were differentiated as already described [45,46]. Briefly, cells were cultured (5 × 104 cells/well in 6-well plate) in serum-free DMEM for 16 h and then cultured in high-glucose DMEM addition of 5% FBS, 5-μg/mL insulin (Sigma, USA), 1-μg/mL hydrocortisone (Sigma, USA), 5-μg/mL prolactin (PRL) (Sigma, USA) and 1-μM retinoic acid (RA) (Sigma, USA). During this period, the medium was changed every 24 h. To determine casein mRNA expression, 10-μM and 25-μM HT was added to cells 1 h before LPS-stimulation.

The possible toxic effect of HT on MAC-T cells was determined by methyl thiazolyl tetrazolium (MTT) assay as previously described [50]. Briefly, cells seeded in a 96-well plate and incubated with HT at 10, 25, 50, 100, 250 μM, for 24 h in a 96-well plate, followed by the MTT treatment (10 μL of 0.5 mg/mL) for 4 h. Acidic isopropanol was added to dissolve any deposited formazan. The optical density at 550 nm was measured using a microplate reader and used to calculate the cell viability.

For each experiment, three or more independent experiments were performed and for each experiment five repeat samples were used. The data resulting from all experiments are expressed as means ± SEM. Statistical differences between groups were compared using ANOVA, followed by Tukey’s test. A p-value of less than 0.05 was considered statistically significant.

Mastitis is widespread clinical disease in livestock and humans induced by microbial infection. The most used therapy to treat this pathology are the antibiotics, but they are related with significant side effects [52]. Investigating new therapeutic tools with fewer side effects is an important goal for the research. In this study, we showed for the first time the that HT, a well-known antioxidant natural compound, significantly reduced the LPS-induced inflammatory response in MAC-T cells. Additionally, we showed that HT treatment was able to increase the expression of α-casein S1, α-casein S2 and β casein in MAC-T differentiated cells after LPS-stimulation.
Recently, it has been demonstrated HT attenuate oxidative stress (glutathione (GSH/GSSH), γ-glutamylcysteine ligase activity, reactive oxygen species and malondialdehyde (MDA) production) and inflammatory response (TNF-α, IL-1β, IL-6 and IL-10) in bovine mammary epithelial cell line (BME-UV1) [53]. First of all, we tested the any toxic effect of HT on MAC-T cells by the MTT assay, based on the metabolic activity of the cells. A significant reduction in cell viability was observed at the concentration of 100 and 250 μM. Recent papers also described the HT toxicity at these concentrations and ascribed it to the HT pro-apoptotic action [29,54]. Once tested the good safety of HT, we moved to investigate its effect on the oxidative stress induced by LPS-stimulation. Previous studies shown the key role of the oxidative stress in mastitis. Overproduction of free oxygen radicals is an early event in answer to bacterial infection or LPS in MAC-T cells. Our results displayed increased oxidative stress as shown by the upregulated intracellular ROS expression and the reduced GSH level. HT pretreatment at 10 μM and 25 μM was able to prevent the increase in oxidative stress in a dose dependent manner. Additionally, we showed that HT reduced NOX-1 mRNA expression. The upregulation of this mitochondrial protein has been linked with the ROS overproduction [55]. Thus, HT pretreatment mitigated LPS-induced NOX-1 expression and ROS generation in MAC-T cells, hinting that HT has important effect against LPS-induced oxidative stress. Several lines of evidence have described that ROS overexpression LPS-induced in turn produces cytokines release [56]. Well in line with literature our study showed increased expression of TNF-α, IL-1β and IL-6 one and six hours after LPS-stimulation. The 10-μM and 25-μM HT treatment significantly prevent the increase of TNF-α, IL-1β and IL-6 LPS-induced. Several evidence suggest that HT is significantly able to improve endogenous antioxidant defense mechanisms by modulating transcription factors such as the Nrf2 [56,57]. Nrf2 is an important regulator of antioxidant signaling. It binds the epoxy chloropropane Kelch sample related protein-1 (Keap1) under homeostatic conditions. When the oxidative stress occurs, in cytoplasm the complex of Nrf2 and Keap1 is dissociated, and Nrf2 enters the nucleus [58]. Once translocated in the nucleus, Nrf2 binds to antioxidant response elements (ARE), promoting the transcriptional activation of metabolizing enzymes/antioxidant proteins enzymes (superoxide dismutase (SOD), Catalase (CAT), glutathione peroxidase (GSH-Px)) in phase II [59,60]. ROS produced by redox reactions can activate Nrf2 by promoting disulfide formation with Keap1 [61]. Therefore, the Nrf2–ARE signaling pathway is the main mechanism for defense against oxidative stress in cells by activating phase II metabolic enzymes/antioxidant protein enzymes [62].Our results showed upregulated the Nrf2 expression after one six hours from LPS-stimulation and HT treatment at bot concentrations (10 μM and 25 μM) increased its expression, confirming that HT antioxidant mechanism is mediated by the Nrf2 pathway. To further confirm the mechanism of the protective effect of HT we evaluated the mRNA expression of several antioxidant enzymes. In particular, our study displayed reduced heme oxygenase-1 (HO-1), NAD(P)H: quinone oxidoreductase (NQO-1), thioredoxin reductase 1 (Txnrd1) mRNA expression after LPS-stimulation. These antioxidant enzymes are phase II detoxifying proteins that provide intracellular defensive mechanism [14]. Our data displayed that the mRNA expressions of these antioxidant genes were upregulated in MAC-T cells treated with HT, suggesting that HO-1, NQO-1 and Txnrd1 are involved in the antioxidant mechanism of HT. These findings are well in line with precedent papers showing that HT reduces antioxidant enzymes [29].
One of the main functions of the bovine mammary epithelial cells is lactation. It involves prolactin, a hormone secreted by the anterior pituitary gland [63]. During lactogenesis and pregnancy prolactin has a crucial role in the mammary gland [64,65]. MAC-T cells stimulated by prolactin together with hydrocortisone, retinoic acid and insulin secret more β-casein [45,46,66]. Mammary epithelial cell differentiation is identified by the activation of genes coding for milk proteins [67]. Bovine mastitis causing cellular damage leads to disruption in lactation. We evaluated the protective effect of HT on this peculiar cell function evaluating the α-casein S1, α-casein S2 and β-casein mRNA levels [68,69]. LPS-stimulation induced the downregulation on the casein genes (α-casein S1, α-casein S2 and β-casein). HT increased the expression levels of three casein isoforms, indicating that protective effect of HT also preserves an important cell functionality.

Our results demonstrate that LPS challenge in MAC-T cell leads to an important increase in oxidative stress and inflammatory response, process that in differentiated MAC-T cells cause a significative impairment in cell functionality such as lactation. Our results showed also that the treatment with the well-known natural molecule HT, has a significantly protective effects. Together with the decrease of oxidative stress the inhibition of proinflammatory cytokines increase is a fundamental step in antagonizing the pathologic process and therefore in preventing or blocking the progression of bovine mastitis. Furthermore, HT treatment was able to significantly improve the cell antioxidant defense. Finally, this protective action of HT is traduced in an important cell functionality such as milk production. These results open a natural good prospective for the use of HT in treatment and prevention of bovine mastitis.

Conceptualization, EG and RC; methodology, R.F.; M.C. and R.S.; formal analysis, A.F.P. and R.D.; data curation, A.F.P. and R.D.; writing—original draft preparation, E.G.; writing—review and editing, supervision, P.L. and R.C. All authors have read and agreed to the published version of the manuscript. 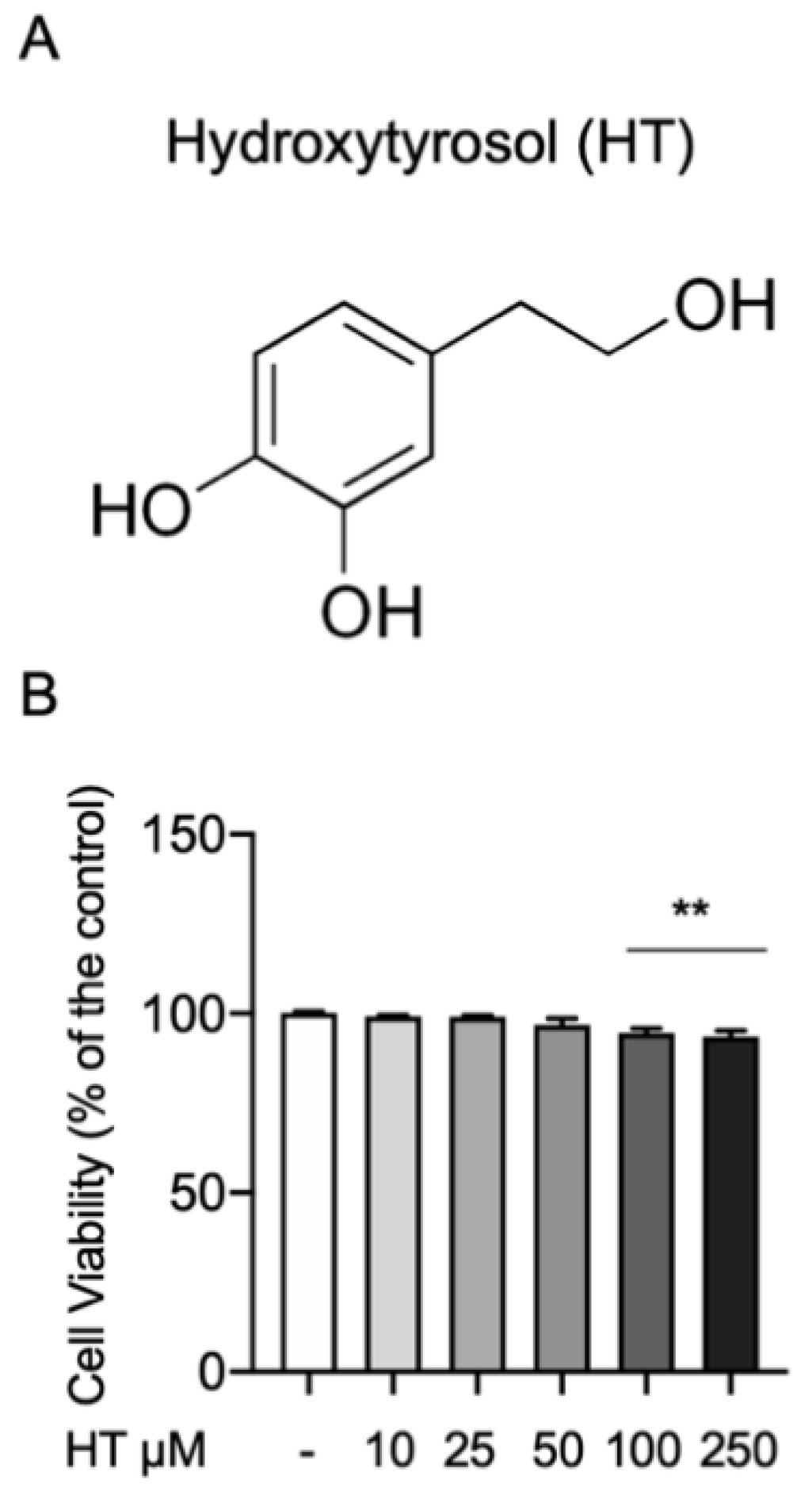 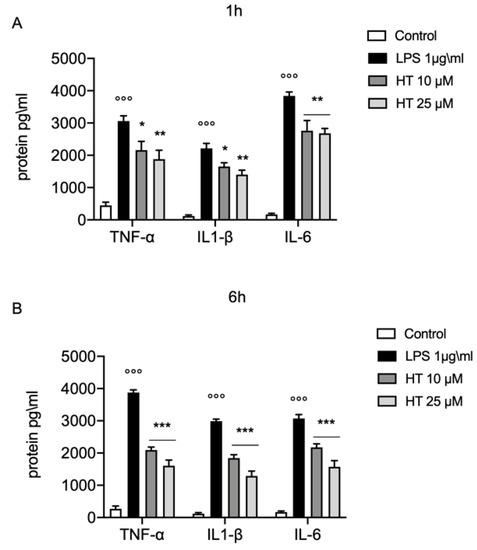 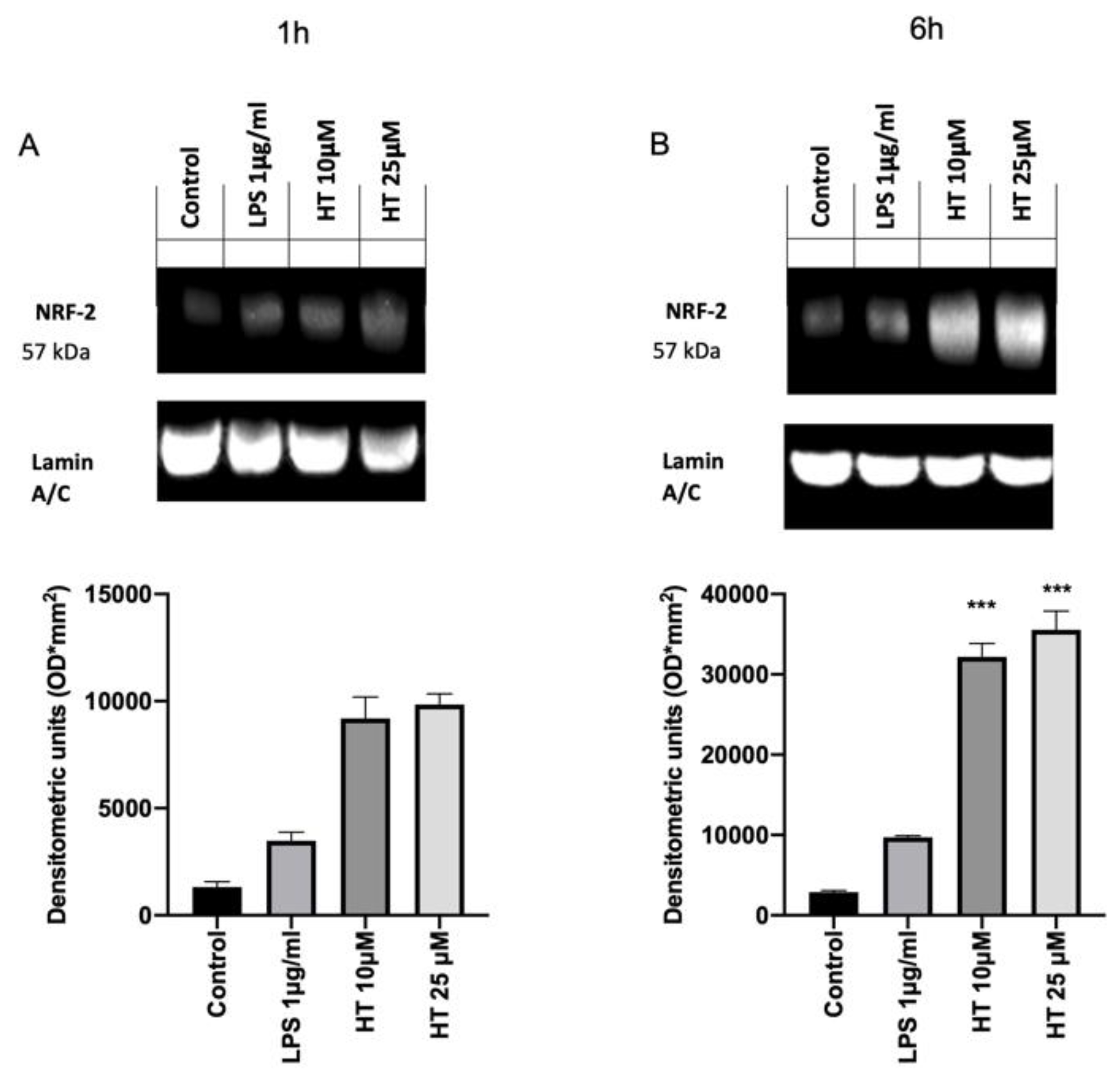 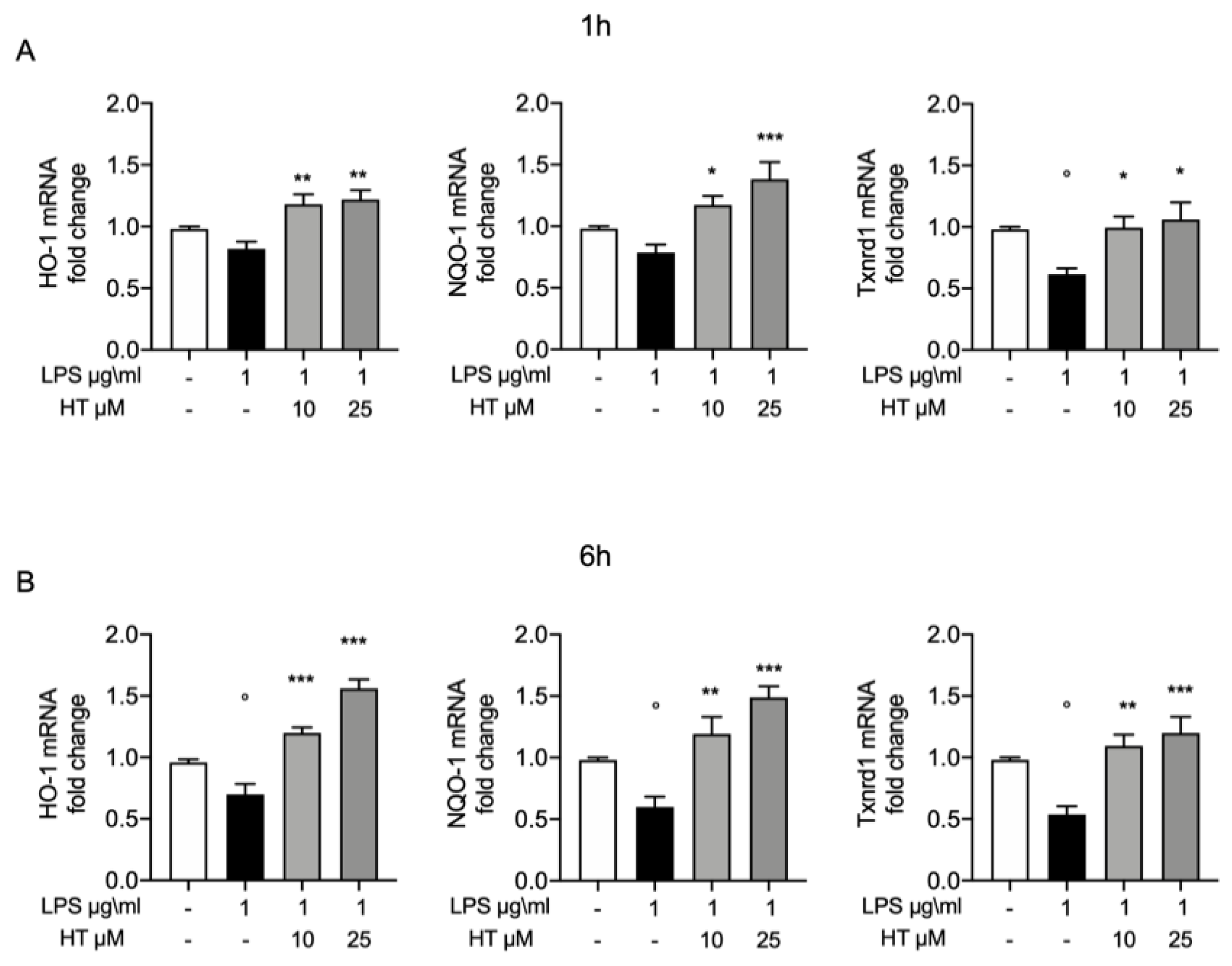 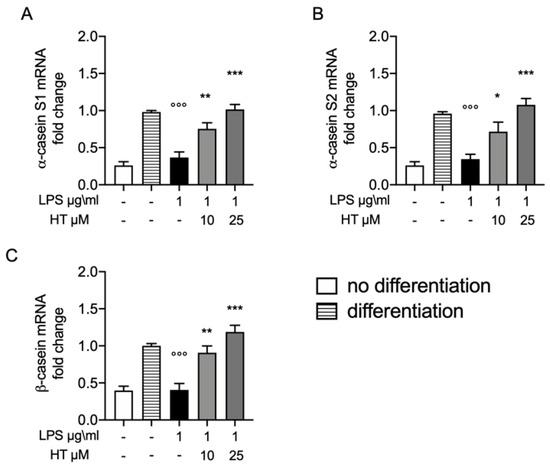 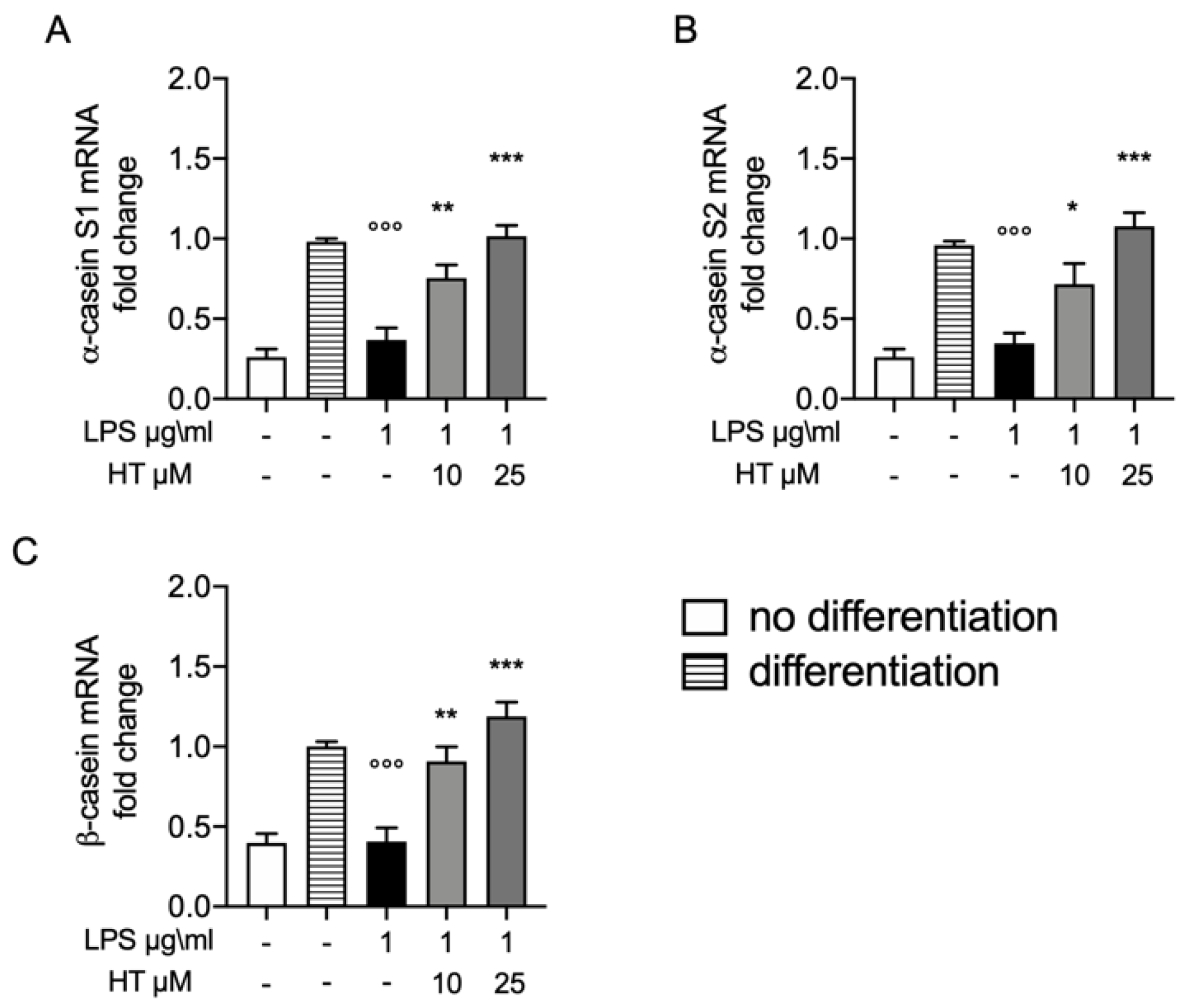