Glutamine (Gln) is a nonessential α-amino acid for protein biosynthesis. However, the mechanism through which Gln regulates NO production in microglial cells is still unclear. In this study, we investigated whether the presence or absence of Gln affects NO production in lipopolysaccharide (LPS)-stimulated BV2 microglial cells. Our data revealed that Gln depletion decreased cell viability accompanied by mild cytotoxicity, and blocked LPS-induced NO production concomitant with a significant decrease in inducible NO synthase (iNOS) expression. Additionally, Gln depletion for 24 h blocked the restoration of LPS-mediated NO production in the presence of Gln, suggesting that Gln depletion caused long-term immune deprivation. In particular, sodium-coupled amino acid transporter 1 and 2 (SNAT1 and SNAT2), which are the main Gln transporters, were highly upregulated in LPS-stimulated BV2 microglial cells, in the presence of Gln accompanied by NO production. Regardless of the presence of Gln, LPS positively stimulated nuclear factor erythroid 2-related factor 2 (Nrf2) and heme oxygenase-1 (HO-1) expression, and transient Nrf2 knockdown and HO-1 inhibition stimulated LPS-induced NO production and iNOS expression; however, transient Nrf2 knockdown did not affect SNAT1 and SNAT2 expression, indicating that Gln transporters, SNAT1 and SNAT2, were not regulated by Nrf2, which downregulated the HO-1-mediated NO production. Moreover, Gln depletion significantly reduced LPS-induced extracellular signal-regulated kinase (ERK) phosphorylation; furthermore, a specific ERK inhibitor, PD98059, and transient ERK knockdown attenuated LPS-stimulated NO production and iNOS expression, in the presence of Gln, accompanied by downregulation of SNAT1 and SNAT2, suggesting that the ERK signaling pathway was related to LPS-mediated NO production via SNAT1 and SNAT2. Altogether, our data indicated that extracellular Gln is vital for NO production from microglia in inflammatory conditions.
Keywords: glutamine; nitric oxide; inducible nitric oxide synthase; nuclear factor-erythroid 2-related factor 2; heme oxygenase-1 glutamine; nitric oxide; inducible nitric oxide synthase; nuclear factor-erythroid 2-related factor 2; heme oxygenase-1

Microglia are the resident macrophages in the brain and spinal cord, and they act as the first line of immune defense in the central nervous system (CNS) [1]. Although transient activation of microglia contributes to the maintenance of cellular homeostasis, its chronic activation causes neurodegenerative diseases, such as Alzheimer’s disease (AD), Parkinson’s disease (PD), and multiple sclerosis [2]. Once exposed to various inflammatory stimuli, such as lipopolysaccharide (LPS), microglia immediately secrete neurotoxic molecules such as nitric oxide (NO), reactive oxygen species (ROS), and inflammatory cytokines [3]. To exert immune responses, several metabolic pathways are activated in microglia. However, whether amino acids regulate microglia activation, remains poorly understood. Recently, Kittl et al. revealed that glycine promotes the migration of microglia via sodium-coupled neutral amino acid transporters (SNATs) [4]. In addition, high levels of branched-chain amino acids, such as leucine, isoleucine, and valine, induce a peculiar polarization of microglia toward the M2 state, accompanied with a strong expression of interleukin-10 (IL-10) [5]. The above studies showed that various amino acids regulate the immune properties of microglia.
Glutamine (Gln) abundantly exists in the CNS and serves as a precursor of neurotransmitters, such as glutamate (Glu), the main excitatory neurotransmitter, and γ-amino butyric acid (GABA), the main inhibitory neurotransmitter in the mammalian cortex [6]. Once activated by LPS, microglia rapidly metabolize Gln from Glu by activating Gln synthetase (GS), triggering inflammatory and pathological responses in the CNS [7], which indicates that Gln is essential for the pathological state in the CNS. In contrary, Palmieri et al. reported that GS inhibition promoted inflammatory responses in LPS-treated microglia cells, through downregulation of Gln/Glu ratios [8]. This discrepancy was caused by the imbalance of Gln/Glu ratios and deregulation of Gln homeostasis, resulting in mitochondrial dysfunction and microglial neurotoxicity [9]. In addition, a well-known amino acid transporter, SNAT2, provides central neurons with extracellular Gln, which is consequently transformed into the neurotransmitter Glu [10]. Mackenzie et al. also revealed the importance of SNAT1 in central neurons to provide metabolic fuel and glutathione precursors [11]. Nevertheless, it remains unclear whether extracellular Gln supplementation regulates NO production as an inflammatory marker, and whether it regulates SNAT1 and SNAT2 expression.
In this study, we observed that in the presence of extracellular Gln, LPS enhanced iNOS expression and NO production in BV2 microglial cells, by activating the extracellular signal-regulated kinase (ERK) signaling pathway and inducing high expression levels of SNAT1 and SNAT2. Furthermore, LPS stimulated nuclear factor erythroid 2-related factor 2 (Nrf2) and heme oxygenase-1 (HO-1) expression, regardless of the presence of extracellular Gln; however, in the presence of extracellular Gln, Nrf2 and HO-1 inhibition markedly increased LPS-mediated NO production, indicating that LPS-mediated Nrf2 and HO-1 might be involved in the downregulation of LPS-mediated NO release.

BV2 microglial cells were generously gifted by Professor Il-Whan Choi (Department of Microbiology, College of Medicine, Inje University, Busan, Korea). These were cultured at 37 ℃ in 5% CO2 in DMEM supplemented with 5% FBS and antibiotics.

For the analysis of cell viability, BV2 microglia cells were seeded at a density of 1 × 105 cells/mL in the indicated concentrations of Gln (0–2.0 mM) for 24 h and then MTT (0.5 mg/mL) was added for 30 min. Following the media removal, dimethyl sulfoxide (DMSO) was added and gently shaken for 15 min. Absorbance of dissolved formazan was determined at 570 nm by a microplate spectrophotometer (BioTek Instruments Inc., Winooski, VT, USA). In a parallel experiment, cell images were taken under phase-contrast microscopy (MACROTECH, Goyang, Gyeonggi-do, Korea).

BV2 microglial cells (1 × 105 cells/mL) were plated onto 24-well plates and incubated with the indicated concentrations of Gln for 24 h, prior to stimulation with 500 ng/mL LPS for 24 h. Cell supernatants were collected and NO production was measured. In brief, the supernatants were mixed with equal volume of Griess reagents (1% sulfanilamide in 5% phosphoric acid and 0.1% naphthylethylenediamine dihydrochloride) and then incubated at room temperature for 5 min. The absorbance was measured at 540 nm by a microplate spectrophotometer (BioTeck Instruments Inc.). Nitrite concentration was determined from a sodium nitrite standard curve.

BV2 microglial cells were seeded on 24-well plate at a density of 1 × 105 cells/mL and transfected by Nrf2- or ERK-specific siRNA for 48 h. For each transfection, 450 μL media were added to 20 nM of the siRNA duplex with transfection reagent G-Fectin (Genolution Pharmaceuticals Inc., Seoul, Korea) and the entire volume was added gently to the cells.

The images were captured and visualized with Chemi-Smart 2000 (Vilber Lourmat, Cedex, France) and quantified by the Scion Imaging software (http://www.scioncorp.com). All data were derived from at least three independent experiments and expressed as mean ± standard error of the median (SEM). Significant differences between groups were determined using an unpaired one-way ANOVA test with Bonferroni correction. (* and # p < 0.01; *** and ### p < 0.001).

To confirm the effect of extracellular Gln on the viability of BV2 microglia cells, MTT assay was performed. The absence and low concentration of Gln below 0.25 mM moderately decreased the viability of the BV2 microglial cells, regardless of the presence of LPS (Figure 1A). Furthermore, microscopic analysis showed no apoptotic characteristics such as cell shrinkage, under 2.0 mM Gln treated conditions, compared to the Gln-free conditions. To verify whether the decrease in cell viability was caused by cell death in the absence and low concentration of Gln, flow cytometric analysis was performed. The results showed that Gln free conditions resulted in 23.8 ± 1.2% cell death accompanied with 76.2 ± 1.2% cell viability and 54.6 ± 0.9 × 105 cells/mL of viable cell count. Supplementation of the cells with 2.0 mM Gln restored Gln deficiency-induced cell death (94.5 ± 0.2%), viability (5.5 ± 0.2%), and viable cell count (81.4 ± 1.5 × 105 cells/mL), indicating the significance of Gln to maintain normal conditions in BV2 microglial cells. Under the Gln-deficient conditions, LPS was associated with 29.8 ± 2.2% dead cell population, while the percentage was slightly decreased, up to 20.8 ± 2.2%, in the presence of 2.0 mM Gln. H2O2 at 0.8 mM significantly decreased the viability and the total cell counts of Gln. Altogether these results suggest that Gln was a pivotal amino acid to regulate normal cell survival.

3.2. LPS-mediated iNOS Expression and NO Production Depend on the Presence of Gln

3.4. LPS Promotes HO-1 Expression Regardless of the Presence of Gln, which Decreases NO Production

3.5. ERK Phosphorylation Upregulates LPS-Induced NO Production in the Presence of Gln

This research was supported by the Basic Science Research Program through the National Research Foundation of Korea (NRF), funded by the Ministry of Education (2019R1A6A1A10072987) and the 2020 Scientific Promotion Program funded by Jeju National University. 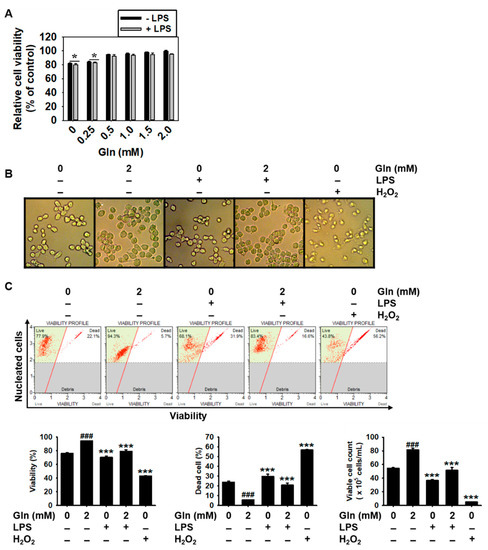 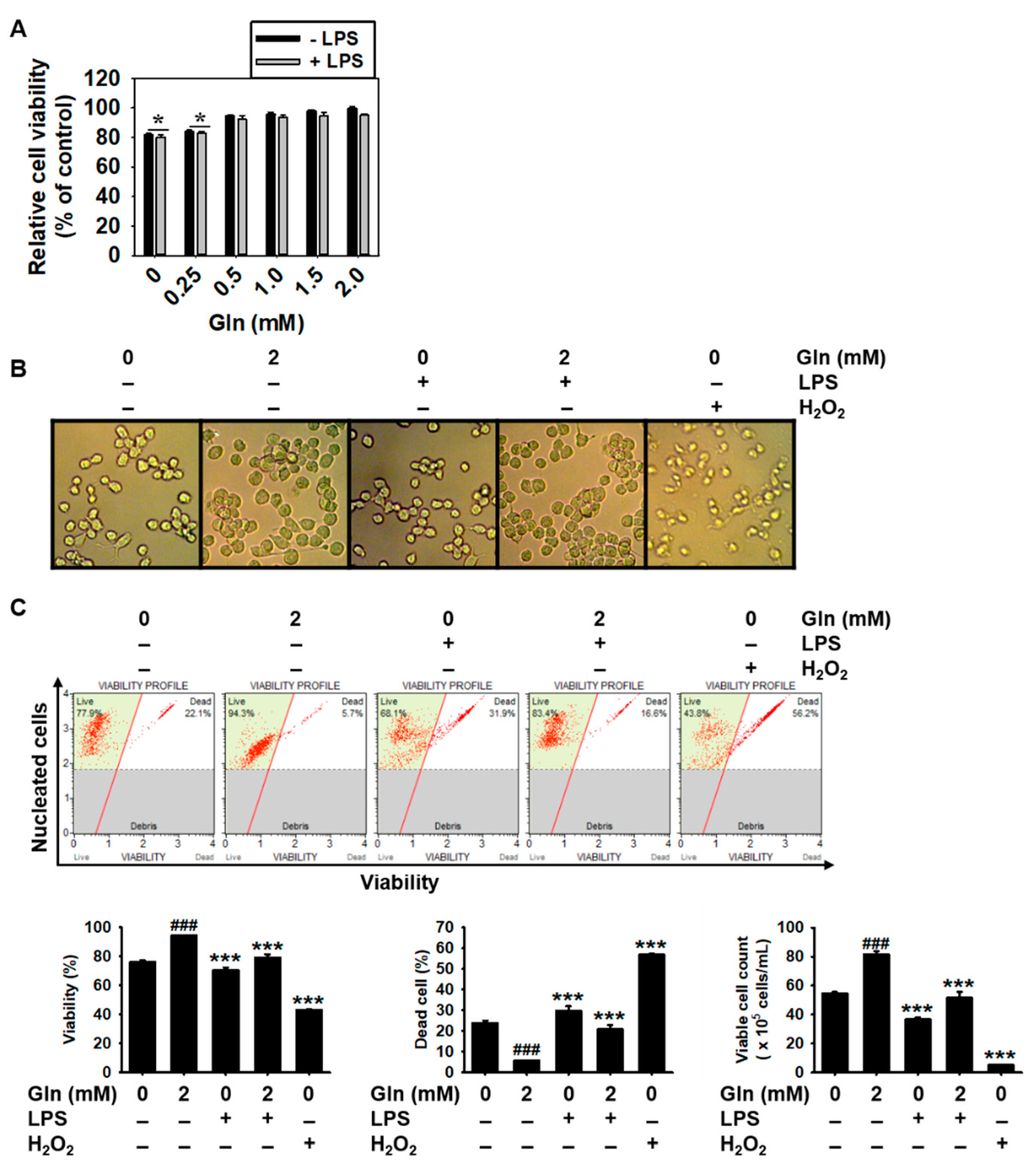 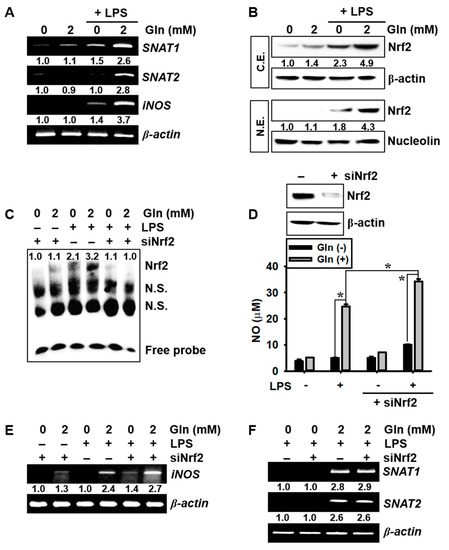 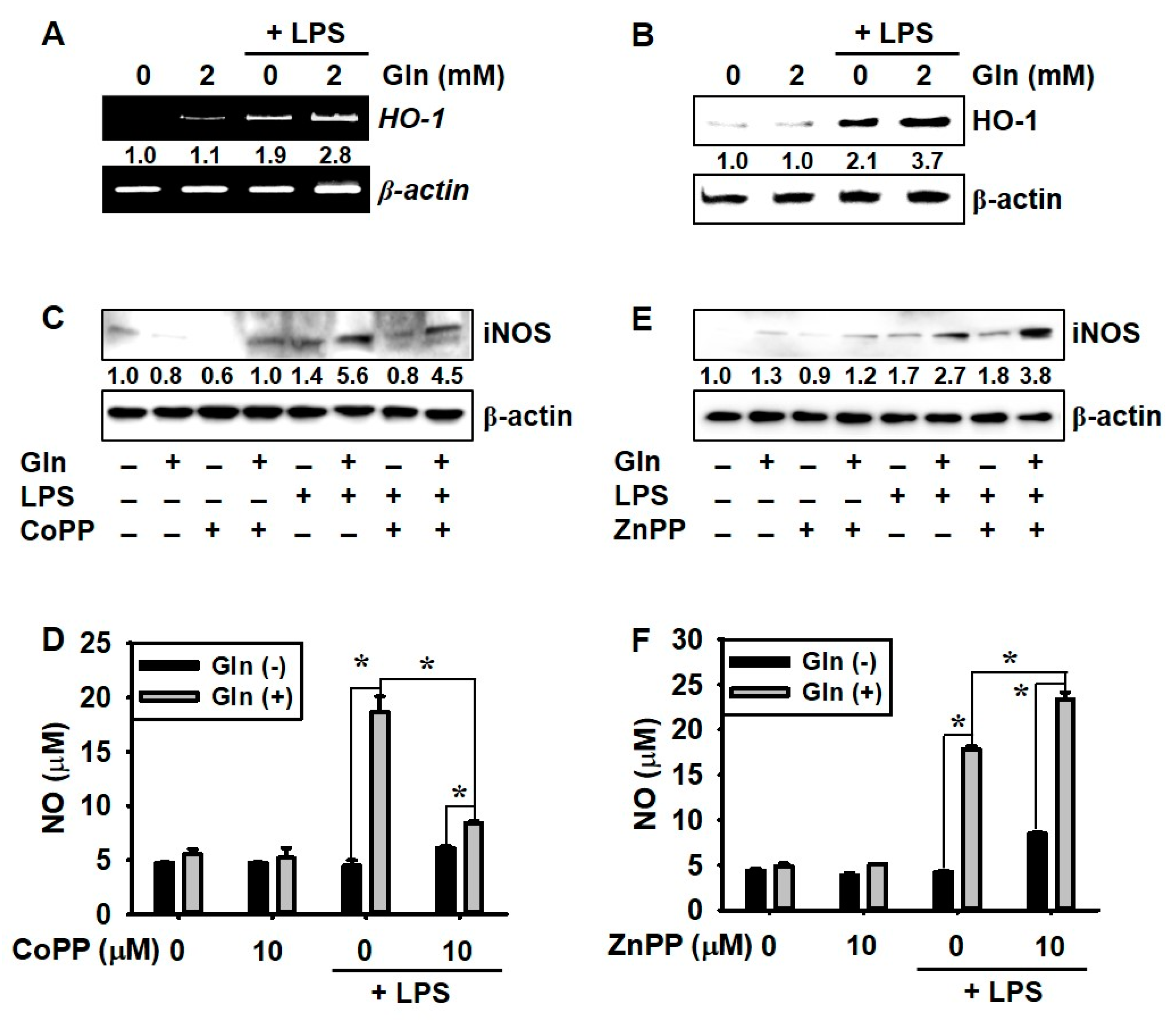 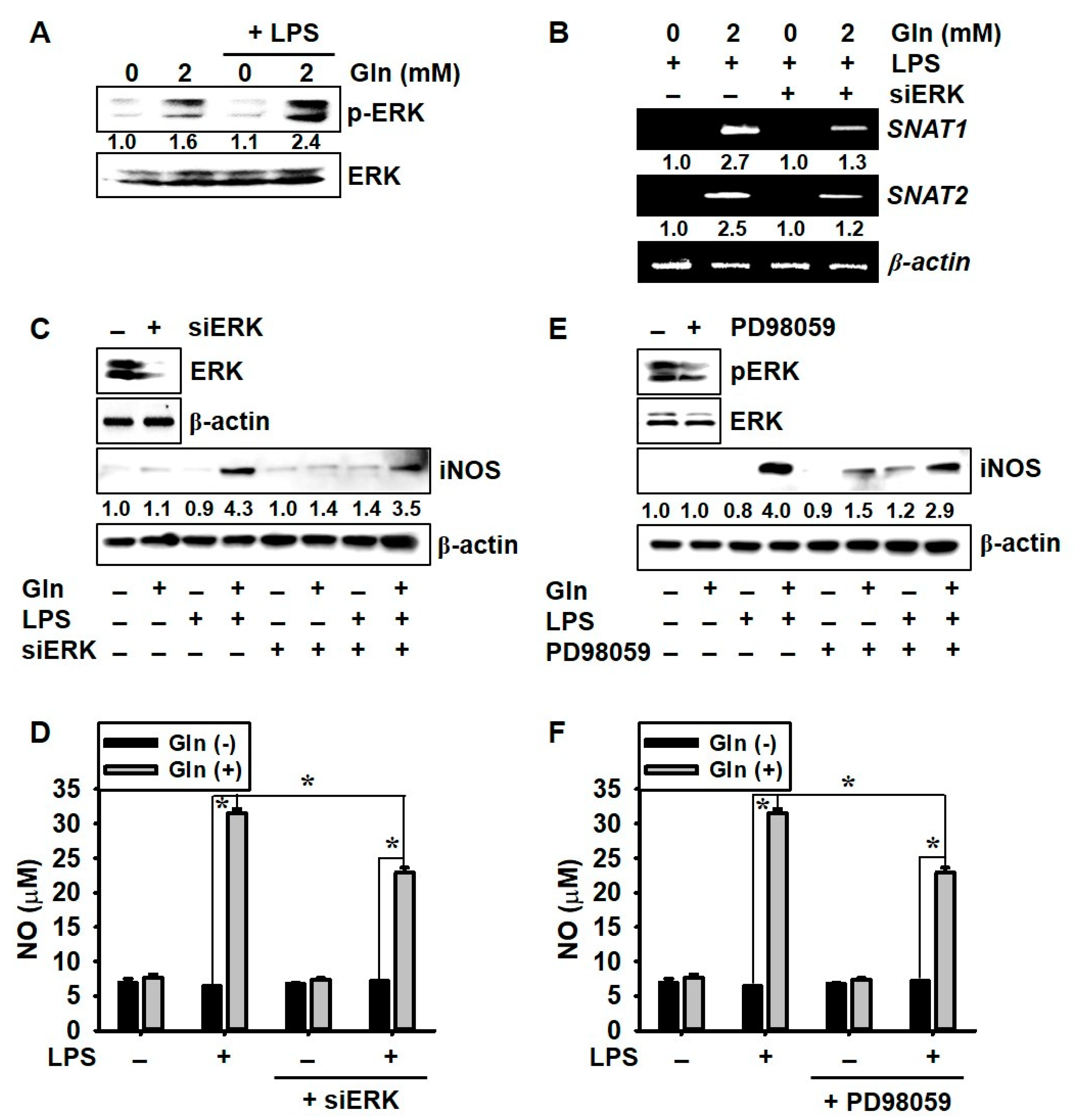 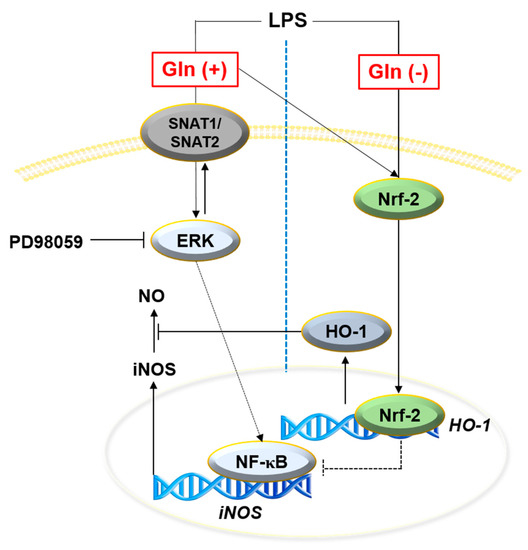