Even though Salvia genus is one of the most known and studied taxa of Lamiaceae family, the knowledge regarding the chemical composition and health-related benefits of some locally used Salvia species (mostly endemic) is still scarce. In this regard, the present work aims to evaluate the chemical profile and potential bioactivities of 70% (v/v) ethanolic extracts obtained from the less-studied S. transsylvanica and S. glutinosa in comparison with S. officinalis. HPLC-PDA analysis revealed the presence of rutin and catechin as the main compounds in the extracts of the three studied species (using the employed HPLC method), whereas the presence of naringenin was highlighted only in S. glutinosa extract. Chlorogenic acid, rutin and quercetin were identified and quantified for the first time in S. transsylvanica extracts. The in vitro antioxidant capacity of each extract was tested through complementary methods (phosphomolybdenum assay, DPPH, ABTS, CUPRAC and FRAP assays), and correlated with the presence of phenolics (especially flavonoids) in high amounts. The neuroprotective and antidiabetic abilities of S. officinalis (the most active as AChE, BChE and α-glucosidase inhibitor), S. glutinosa (the most active as α-amylase inhibitor) and S. transsylvanica were also studied. For each extract it was determined the antimicrobial, antifungal and cytotoxic effects using in vitro assays. The obtained results confirm the potential of S. transsylvanica and S. glutinosa as promising sources of bioactive compounds and as a starting point for further analyses. View Full-Text
Keywords: Salvia transsylvanica; S. glutinosa; S. officinalis; bioactive compounds; phenolics; antioxidant compounds; enzyme inhibitory activity Salvia transsylvanica; S. glutinosa; S. officinalis; bioactive compounds; phenolics; antioxidant compounds; enzyme inhibitory activity
►▼ Show Figures 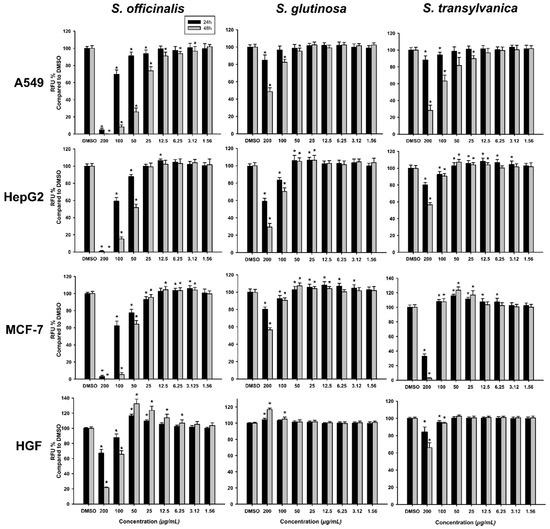