Bioactive Variability and In Vitro and In Vivo Antioxidant Activity of Unprocessed and Processed Flour of Nine Cultivars of Australian lupin Species: A Comprehensive Substantiation
Next Article in Special Issue

Post-Treatment with Erinacine A, a Derived Diterpenoid of H. erinaceus, Attenuates Neurotoxicity in MPTP Model of Parkinson’s Disease

Effect of Natural Preservatives on the Nutritional Profile, Chemical Composition, Bioactivity and Stability of a Nutraceutical Preparation of Aloe arborescens

Citric acid, quercetin, dried chestnut flowers and an aqueous extract of chestnut flowers were screened as candidates for preserving a drinkable nutraceutical preparation for 45 days. The assays encompassed antioxidant and antimicrobial activities, nutritional and chemical profiles, and individual profiles of fatty acids and mineral composition, all of which in comparison with a sodium benzoate, a synthetic preservative. The centesimal composition of the nutraceutical formulation was mainly composed of carbohydrates, followed by proteins and fat, with moisture levels between 66% and 71%. Palmitic and stearic acid were the most abundant fatty acids, while calcium and magnesium where the minerals in higher amount. Anthroquinones, followed by flavonoids where the most abundant groups of phenolic compounds. In terms of the preserving effects of the extracts, the chestnut flowers and the citric acid were the most effective natural preservatives, which better preserved phenolic compounds. Furthermore, these two ingredients also revealed the strongest capacity to control the microbial growth in the formulation by inhibiting the growth of food contaminants. In general, these ingredients revealed higher preservation capacity than sodium benzoate, while not altering the nutritional and fatty acid profile. The chestnut flowers and citric acid could be used to preserve foods, food supplements, and nutraceutical formulations after passing the required regulatory procedures for food additives. View Full-Text
Keywords: nutraceuticals; natural ingredients; Aloe arborescens; natural preservatives; chestnut flowers nutraceuticals; natural ingredients; Aloe arborescens; natural preservatives; chestnut flowers
►▼ Show Figures 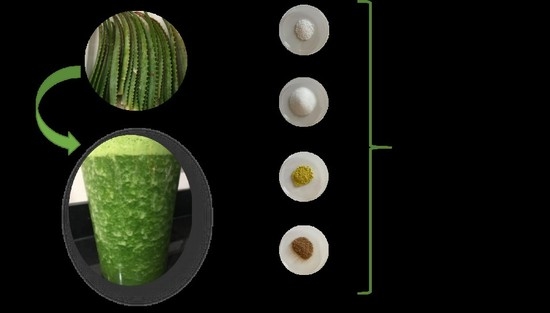