Knockout Mouse Models for Peroxiredoxins
Next Article in Special Issue

The Possibility of Using Genotoxicity, Oxidative Stress and Inflammation Blood Biomarkers to Predict the Occurrence of Late Cutaneous Side Effects after Radiotherapy
Previous Article in Journal

Antioxidants are molecules that delay or inhibit the oxidation of other molecules. Its use significantly increased in recent years in the diet of people. Natural antioxidants are replacing the use of synthetic antioxidant ingredients due to their safety, nutritional, and therapeutic values. Hydrolyzed collagen (HC) is a popular ingredient considered to be an antioxidant. This low molecular weight protein has been widely utilized due to its excellent biocompatibility, easy biodegradability, and weak antigenicity. It is a safe cosmetic biomaterial with good moisturizing properties on the skin. The antioxidant properties of HC are conditioned to the size of the molecule: the lower the molecular weight of peptides, the greater the ability to donate an electron or hydrogen to stabilize radicals. The antioxidant capacity of HC is mostly due to the presence of hydrophobic amino acids in the peptide. The exact mechanism of peptides acting as antioxidants is not clearly known but some aromatic amino acids and histidine are reported to play an important role in the antioxidant activity. Oral ingestion of HC increases the levels of collagen-derived peptides in the blood torrent and improves the skin properties such as elasticity, skin moisture, and transepidermal water loss. Additionally, daily intakes of HC protect the skin against UV melasma, enhances the fibroblast production and extracellular matrix of the skin. HC has been identified as a safe cosmetic ingredient for topical formulations with good moisturizing properties at the stratum corneum layer of the skin. It reduces the effects of skin aging (dryness, laxity, and wrinkles). The use of HC as a principal ingredient in safe formulations for skin protection was reviewed and compared when it is used by topical and/or oral administration. View Full-Text
Keywords: peptide; skincare; extracellular matrix; hydrolyzed collagen; skin aging peptide; skincare; extracellular matrix; hydrolyzed collagen; skin aging
►▼ Show Figures 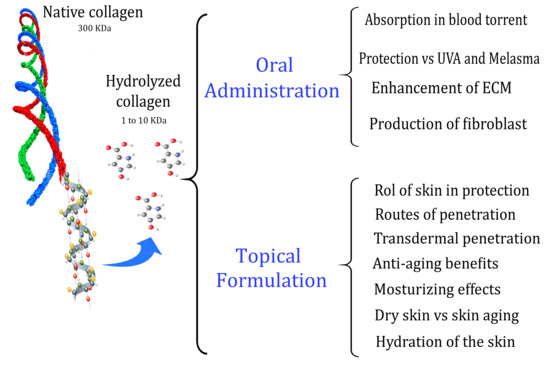