Phytochemical Profile and Biological Activities of Tendrils and Leaves Extracts from a Variety of Vitis vinifera L.
Previous Article in Journal

Osteoarthritis (OA) is the most common form of arthritis. It is also the most common cause of disability in older adults, affecting approximately 15% of the population. As an age-related disease, it mostly affects joints, shoulders, hands, feet, and spine, with knee and hip joints being commonly affected. The disease is characterized by deterioration of cartilage in joints, resulting in bones rubbing together that causes stiffness, pain, and impaired movement. Its risk factors include occupational injury, trauma, obesity, bone density, gender, lack of exercise, and genetic predisposition [1,2,3,4]. As a main cause of disability, OA reduces the quality of life with socio-economic burdens due to limited social activities, mood, memory loss, suicide, economic cost, and decreased productivity. OA is not only a problem in developing countries, but also a problem in developed countries [5,6,7,8,9,10]. To overcome these burdens, effective protective strategies need to be established by targeting leading causes of OA and improving the functional status of chondrocytes.
Age-related oxidative stress refers to increased intracellular levels of reactive oxygen species (ROS) known to play a critical role in the development and progression of OA [11,12]. Oxidative stress can lead to OA due to cell death of chondrocytes, telomerase shorting, DNA damage, and mitochondrial dysfunction, which can stimulate signaling pathways to initiate biological processes [11,12,13,14]. ROS can stimulate nuclear factor kappa B (NF-κB) and nuclear factor (erythroid-derived 2)-like 2 (Nrf2) signaling pathways. Both NF-κB and Nrf2 are transcription factors implicated in gene expression of antioxidant enzymes [15,16]. However, a high concentration of ROS causes apoptosis in chondrocytes [11,12,13,14]. NF-κB and Nrf2 signaling pathways contribute to ROS reduction and provide protection to chondrocytes against oxidative stress [15,16,17,18,19,20]. Thus, an effective protective strategy needs to be established by targeting oxidative stress through NF-κB and Nrf2 signaling pathways to maintain redox balance and chondrocyte homeostasis.
ROS are known to be cytotoxic to most species including human. However, cells can neutralize ROS through molecular mechanisms using antioxidants and antioxidant enzymes. These antioxidants and antioxidant enzymes can convert superoxide to H2O and O2, regulate the intracellular redox, and counteract ROS to protect chondrocytes from oxidative damage [11,12,13,14,21,22]. Chondrocytes express a variety of antioxidants and antioxidants enzymes to prevent harmful effects of ROS. However, due to age-related decline in the expression of antioxidant enzymes and increased intracellular levels of ROS, homeostasis maintenance is lost and articular cartilage is degenerated, resulting in chondrocyte apoptosis and increased vulnerability to ROS-induced cell death [21,22,23]. Therefore, there is a need to search for ways protect chondrocytes against oxidative stress and maintain homeostasis. Recently, natural compounds such as cyanidin, delphinidin, malvidin, and pelargonidin were used as therapeutics for OA and several diseases [24]. Due to their potential as antioxidants, anthocyanins can protect chondrocytes against oxidative stress via various pathways, thus suppressing the progression of OA [25,26,27]. Among various kinds of anthocyanins, delphinidin is a specific class of polyphenols that can protect chondrocytes and inhibit the progression of OA [28]. However, how delphinidin protects chondrocytes and inhibits the progression of OA remains elusive.
Autophagy is a metabolic process that can sequester protein aggregates, damaged cellular organelles, and pathogen autophagosomes to be fused with lysosomes in the cytoplasm for degradation. This phenomenon is intrinsically adopted by cells to support them in a metabolically defiant microenvironment, to escape toxicity, and to reduce apoptosis induced by ROS [29,30]. Autophagy has dual and context-dependent roles in progression, protection, and death promotion in OA pathogenesis as in cancer [31,32,33]. Chondrocytes use autophagy as a very efficient housekeeping program for homeostasis maintenance and protection against various stresses [34,35,36,37]. The loss or impairment of autophagy in articular cartilage under mechanical or inflammatory stress was linked to aging-related cell death and increased OA severity [38,39,40,41,42,43]. However, the relationship between autophagy and cell death in chondrocytes and its mechanism are not fully understood yet. Additional studies are needed to decipher the underlying cell signaling mechanisms of autophagy.
In this study, we evaluated the potential role of delphinidin in protecting human chondrocytes against hydrogen peroxide (H2O2)-induced oxidative stress. Furthermore, we investigated which mechanism might be associated with delphinidin-induced cell protection in human chondrocytes. Cell survival is generally associated with apoptosis or autophagy. However, we do not yet know which pathway delphinidin uses to prevent the progression of OA. Thus, the purpose of this study was to investigate whether delphinidin might be cytoprotective for human chondrocytes and to further elucidate mechanisms associated with the effect of delphinidin. We hypothesized that delphinidin could prevent the progression of OA via autophagy.

C28/I2 human chondrocyte cells (SCC043) were obtained from Merck and cultured at 37 °C in a 5% CO2 humidified atmosphere in DMEM medium supplemented with 5% (v/v) FBS, 100 units/mL penicillin, and 100 µg/mL streptomycin. Cell viability of C28/I2 human chondrocytes was determined using the CCK-8 kit. Cells (~5 × 104 cells/well) in 96-well plates were treated with hydrogen peroxide solution (H2O2) in combination with other compounds such as NAC, delphinidin chloride, chloroquine, or rapamycin. Each well containing 100 µL of media and CCK-8 reagent (10 µL) was added into each well, and cells were further incubated at 37 °C for 4 h in a 5% CO2 humidified atmosphere. Cell viability was determined by measuring absorbance at 485 nm using a microplate reader (Hidex 1 FN/Chameleon; Turku, Finland).

TUNEL (terminal uridine nick-end labeling) assays were performed to measure the apoptosis by using the Promega DeadEnd™ Fluorometric TUNEL assay system. Cells were cultured on coverslips for 24 h and then treated with hydrogen peroxide solution (H2O2) in the presence or absence of NAC (N-acetylcysteine), delphinidin chloride, chloroquine, and rapamycin. Cells were fixed with 4% (w/v) paraformaldehyde for 30 min and permeabilized with PBS containing 0.1% Triton X-100 for 20 min at room temperature. Cells were blocked with 5% horse serum in PBS for 1 h, and then TUNEL assays were performed to measure the apoptosis accordance with the manufacturer’s instruction of the Promega DeadEnd™ Fluorometric TUNEL assay system for 1 h. After washing with PBS, cells the glass coverslips were mounted onto glass slides using a mounting medium containing DAPI. Slides were analyzed with a florescence microscope (BX51-DSU; Olympus, Tokyo, Japan). More than 1500 nuclei were counted per field. The experiment was repeated three times.

C28/I2 human chondrocytes were cultured on polylysine-coated coverslips for 24 h. After incubation, cells were treated with 500 µM H2O2 in the presence or absence of 40 µM delphinidin chloride for 2 h. After treatment, cells were washed twice with 1× PBS and then fixed with 4% (w/v) paraformaldehyde for 30 min. After incubation, cells were washed with 1× PBS and permeabilized with PBS containing 0.1% Triton X-100 for 20 min at room temperature. Cells were blocked with 5% horse serum in PBS for 1 h and then incubated with primary antibodies overnight at 4 °C. After washing with PBS, cells were incubated with FITC-conjugated secondary antibodies (1:50 in PBS) at room temperature for 90 min. Slides were washed twice with PBS for 5 min each, and images were captured with a confocal microscope (FV-1000; Olympus, Tokyo).

C28/I2 cells were cultured on coverslips for 24 h and then treated with 500 µM H2O2 in the presence or absence of delphinidin for 2 h. After treatment, cells were washed three times with PBS, fixed with 4% formaldehyde, and permeabilized with 100% methanol. For determination of autophagy, an acridine orange (AO) assay were performed according to the given instructions. Acridine orange (AO) dye was added to cells at a final concentration of 1 μg/mL and incubated at room temperature for 15 min, protected from direct light. Red (acidic vacuoles) and green (cytoplasm) fluorescent images were captured with a confocal microscope (FV-1000; Olympus, Tokyo) using color filters for TRITC (Tetramethylrhodamine) and FITC (Fluorescein isothiocyanate), respectively. Overlapped images were then processed and quantified using NIH Image J software.

C28/I2 cells were seeded into six-well plates with sterile cover slips for 24 h and then treated with 500 µM H2O2 in the presence or absence of delphinidin chloride, rapamycin, or chloroquine for 2 h. Following treatment, cells were washed with 1× PBS three times. After washing, autophagic vacuoles were labeled with MDC by incubating cells grown on coverslips with 0.05 mM MDC in PBS at 37 °C for 15 min in the dark (protected from direct exposure to light). After incubation, cells were washed with PBS four times and immediately analyzed with an inverted fluorescent microscope (Leica).

3.1. Delphinidin Has Cytoprotective Effects in Chondrocytes under Oxidative Stress

3.3. Autophagy Is Involved in the Protection of Delphinidin against H2O2-Induced Oxidative Stress

To further test the cytoprotective activity of delphinidin, we measured autophagy induced by treatment with H2O2 in the presence and absence of delphinidin for 4 h. Firstly, we assessed the conjugation of LC3 (unconjugated LC3, called LC3-I) with PE (phosphatidylethanolamine) lipids, called LC3-II. Interestingly, expression levels of well-known autophagy marker LC3-II were significantly increased in the group treated with delphinidin only and in groups treated with H2O2 in the absence or presence of delphinidin (Figure 3A,B). These data were further confirmed by LC3 punctate analysis, as well as MDC and acridine orange (AO) staining analyses, which are indicative for the formation of autophagosomes or autolysosomes upon induction of autophagy. Once LC3s are conjugated with PE, they aggregate together into an intracellular double-membrane structure, called autophagosomes, and subsequently into autolysosomes fused with lysosomes. As shown above, delphinidin itself significantly increased LC3 puncta and further promoted these punctate numbers when chondrocytes were incubated with 40 µM delphinidin and 500 µM H2O2 (Figure 3C,D). In addition, MDC or AO dye staining analyses showed a similar formation of autolysosomes with treatment of delphinidin and hydrogen peroxide (Figure 3E–H). These results indicate that autophagy induced by delphinidin could be associated with the cytoprotective mechanism in chondrocytes in oxidative stress conditions.

3.4. Cytoprotective Role of Delphinidin Is Modulated by Activation of Autophagy in Oxidative Stress 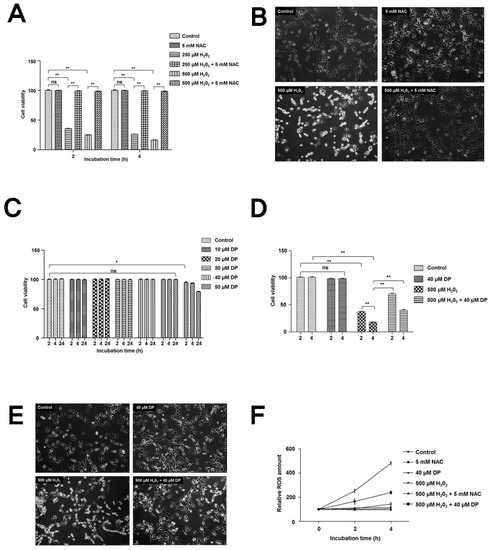 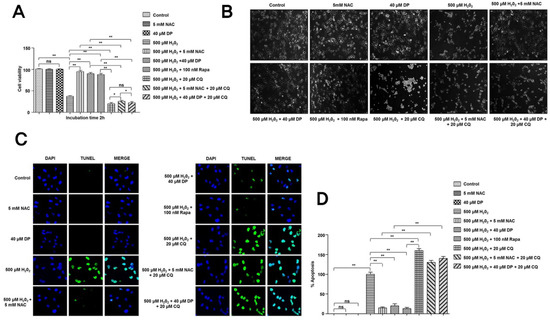 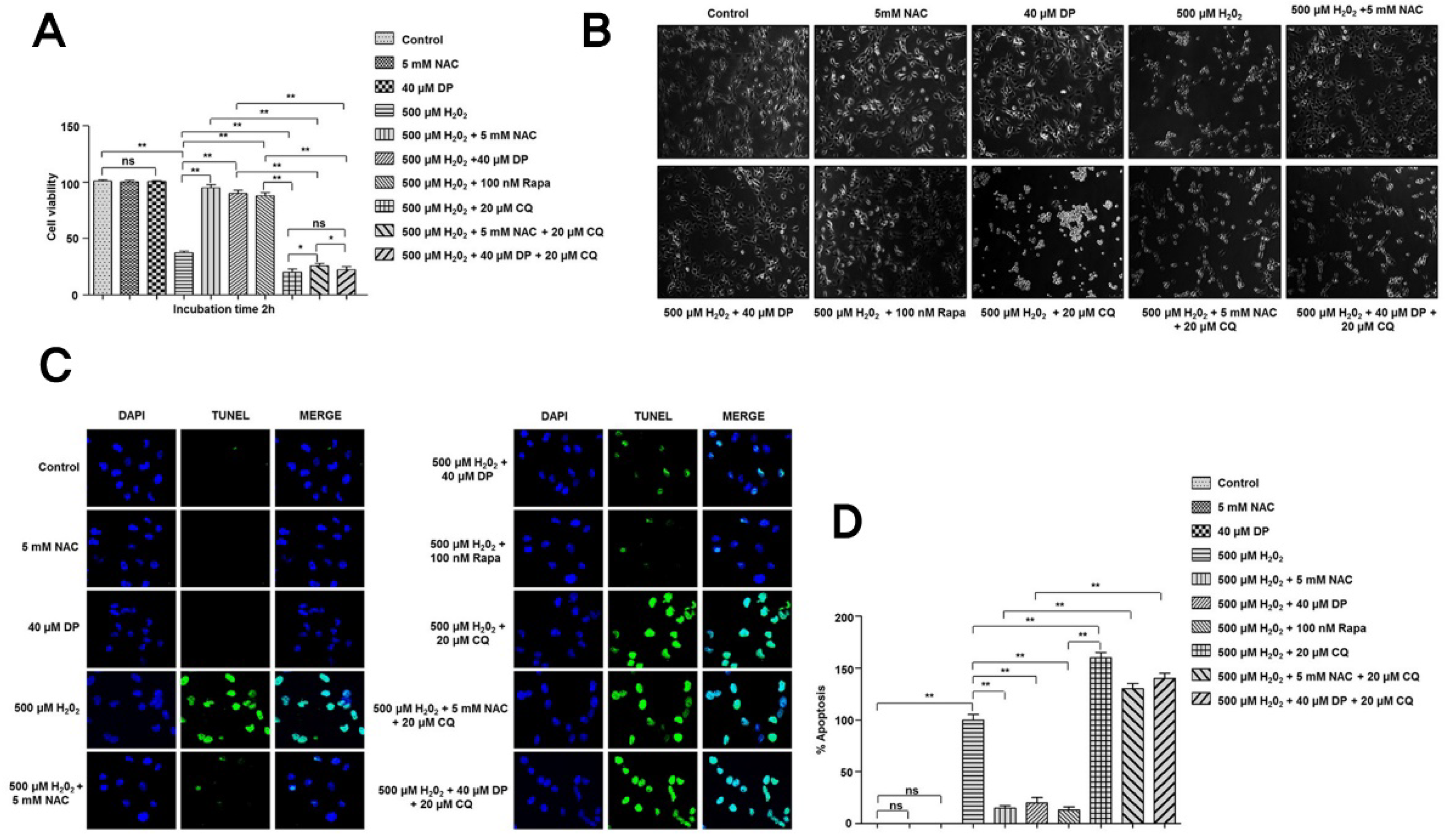