Renal fibrosis is critically involved in the pathogenesis of chronic kidney disease (CKD) and attributed to excessive deposition of extracellular matrix (ECM). Its underlying mechanisms are complex and involve various cellular pathways [1]. Among them, fibroblast-myofibroblast transdifferentiation is one of the critical steps in the fibrotic process. Myofibroblasts synthesize and secrete large amount of ECM into the renal interstitial region. Thus, blocking fibroblast-myofibroblast transdifferentiation would be a promising preventive or therapeutic approach against renal fibrosis.
Transforming growth factor-β1 (TGF-β1) is a crucial mediator in the pathophysiology of fibrotic diseases such as renal fibrosis [2,3]. Its downstream signaling involves Smad and non-Smad signaling cascades that regulate gene expression required for fibrotic processes including fibroblast-myofibroblast transdifferentiation. It has been shown that Smad proteins are overactivated in the kidneys of patients and animals with CKD [4,5,6,7]. TGF-β1 induces phosphorylation of Smad proteins including Smad2 and Smad3, which form complexes with Smad4 [2]. Then, the complexes are translocated into the nucleus to modulate expression of fibrosis-related genes. In addition, the cytokine can also activate various non-Smad signaling pathways such as Akt and mitogen-activated protein kinase (MAPK) pathways [8].
The pineal hormone melatonin plays an essential role in regulating the sleep–wake cycle [9]. Besides, the hormone has been reported to exert multiple biological actions such as anti-inflammatory and anti-oxidant effects [10,11]. Accumulating evidence suggests that fibrotic processes in a variety of organs were ameliorated by the hormone [12]. Indeed, melatonin was shown to have protective effects against renal fibrosis in several animal models [13,14,15,16]. However, mechanisms for the beneficial effects of the hormone against renal fibrosis remain poorly understood.
The present study aimed to explore the effects of melatonin on TGF-β1-stimulated fibroblast-myofibroblast transdifferentiation and investigate its underlying mechanisms. We noted that melatonin prevents TGF-β1-induced proliferation and activation of renal fibroblasts through suppressing Smad and non-Smad signaling cascades. These effects of melatonin were mediated by inhibiting reactive oxygen species (ROS)-mediated mechanisms in its receptor-independent manner. These findings provide a novel mechanistic insight into the preventive effects of melatonin against renal fibrosis.

The rat kidney interstitial fibroblast cell line NRK-49F cells were purchased from the American Type Culture Collection (Rockville, MD, USA). Cells were grown in Dulbecco’s Modified Eagle’s Medium containing 10% fetal bovine serum at 37 °C under 5% CO₂ and 95% air. To explore the effect of melatonin on TGF-β1-stimulated activation of fibroblasts, the cells were incubated with TGF-β1 (5 ng/mL; R&D Systems, Minneapolis, MN, USA) for 24 h after pretreatment with melatonin (0.1 mM or 1 mM) for 30 min in the presence or absence of luzindole (20 μM or 100 μM). In addition, the cells were treated with TGF-β1 (5 ng/mL) for 24 h after preincubation with N-acetylcysteine (NAC, 10 mM) or 1 mM melatonin for 30 min. Melatonin, lunzindole, and NAC were purchased from Sigma-Aldrich (St. Louis, MO, USA). Melatonin and luzindole were dissolved in dimethyl sulfoxide (DMSO). The solvent was added to the control cells in the experiments with these compounds. The final concentrations of DMSO in each well did not exceed 0.5% (v/v), which by itself did not affect the cell viability.

Total RNA was extracted from cells with TRIzol (Invitrogen, Carlsbad, CA, USA) and cDNA was synthesized from 2 ug of total RNA using RNA to cDNA EcoDry Premix (TaKaRa, Tokyo, Japan) according to the manufacturer’s instructions. The cDNA was amplified by PCR with the following primers: MT1 (NM_008639.3), 5′-TGTCAGCGAGCTGCTCAATG-3′ and 5′-GGTACACAGACAGGATGACCA-3′; MT2 (NM_145712.2), 5′-GAACAGCTCAATCCCTAACTGC-3′ and 5′-ACGACTACTGTAGATAGCATGGG-3′, GAPDH (NM_008084.2), 5′-GACAACTTTGGCATCGTGGA-3′ and 5′–ATGCAGGGATGATGTTCTGG-3′.

NRK-49F cells were seeded onto a 60-mm culture dish and transfected with rat MT1/MT2 small interfering RNA (siRNA) (#1330001; Thermo Fisher Scientific) or control siRNA (AM4611; Invitrogen) using Lipofectamine 2000 (Thermo Fisher Scientific) according to the manufacturer’s instructions. At 24 h after transfection, the cells were pretreated with melatonin (1 mM) for 30 min and then incubated with TGF-β1 (5 ng/mL).

NRK-49F cells were fixed for 20 min at room temperature with 4% paraformaldehyde in phosphate-buffered saline. After permeabilization and blocking, the cells were probed with primary antibodies against p-Smad2/3 (1:200; #8828; Cell Signaling), Smad4 (1:200; sc7966; Santa Cruz Biotechnology, Santa Cruz, CA, USA), or α-SMA (1:200; A2547; Sigma-Aldrich), followed by incubation with secondary antibodies directed against the primary antibody. Nuclei were counterstained with 4′,6-diamidino-2-phenylindole (DAPI). The stained cells were visualized using a confocal microscope (Nikon, Tokyo, Japan).

Data are presented as the mean ± standard error of the mean (SEM). Comparisons between groups were assessed using one-way ANOVA with Bonferroni’s post-hoc tests. All experiments were performed at least 2 times. A p value less than 0.05 was considered statistically significant.

Given that proliferation and activation of fibroblasts are key processes for their transdifferentiation to myiofibroblasts, we first investigated the effects of melatonin on TGF-β1-stimulated proliferation of renal interstitial fibroblasts. NRK-49F cells were preincubated with melatonin (1 mM) and then treated with TGF-β1 (5 ng/mL). Cell viability was evaluated using CCK-8 assay at 0, 24, and 48 h. Pretreatment with melatonin significantly suppressed TGF-β1-stimulated proliferation, while melatonin alone did not affect cell proliferation (Figure 1A).
We next examined the effects of the hormone on fibroblast activation invoked by TGF-β1. Treatment with TGF-β1 (5 ng/mL) significantly increased expression of ECM proteins including collagen Ⅰ and fibronectin, and α-SMA when compared with the control (Figure 1B–E). These changes were significantly suppressed by melatonin (1 mM).

In order to explore mechanisms for the inhibitory effects of the hormone on fibroblast-myofibroblast transdifferentiation, we first investigated its effects on TGF-β1/Smad signaling pathway. TGF-β1 induces phosphorylation of Smad2 and Smad3, which form a heteromeric complex with Smad4 [2]. Then, the complex is translocated into the nucleus to regulate expression of fibrosis-related genes. We found that pretreatment with melatonin (1 mM) suppressed TGF-β1-induced phosphorylation of Smad2/3 (Figure 2A,B). Immunofluorescent staining revealed that increased nuclear co-localization of their phosphorylated forms and Smad4 after TGF-β1 treatment was decreased by melatonin (Figure 2C).
In addition, the cytokine can also induce activation of non-Smad signaling pathways such as Akt or MAPK cascades [8]. We observed that phosphorylations of Akt, ERK1/2, and p38 after TGF-β1 treatment were also significantly inhibited by the hormone (1 mM) (Figure 3A–D). Collectively, these findings indicate that melatonin suppresses Smad and non-Smad signaling pathways stimulated by TGF-β1.

3.3. Inhibitory Effects of Melatonin on TGF-β1-Induced Proliferation and Activation Is Independent of Its Membrane Receptors

3.4. Inhibitory Effects of Melatonin on TGF-β1-Induced Proliferation and Activation Is attributed to the Inhibition of ROS-Mediated Mechanisms

Melatonin can act as a direct scavenger of ROS. Accumulating evidence suggests that the antioxidant property of melatonin is closely associated with its membrane receptor-independent mechanisms [10]. Thus, we next aimed to explore whether inhibitory action of the hormone on TGF-β1-stimulated fibroblast-myofibroblast transdifferentiation is attributed to the deactivation of ROS-mediated mechanisms. We first investigated the effects of melatonin on ROS generation in NRK-49F cells stimulated by TGF-β1. As expected, treatment with TGF-β1 elevated intracellular levels of ROS and MDA (Figure 6A,B). These effects were significantly attenuated by pretreatment with melatonin or NAC. Decreased GSH/GSSG ratio after TGF-β1 treatment was also significantly reversed by the hormone or NAC (Figure 6C). Altogether, these results suggest that melatonin effectively reduces ROS generation and lipid peroxidation, and changes intracellular redox status in TGF-β1-treated renal interstitial fibroblasts.
We next examined whether NAC can also exert inhibitory effects on proliferation and activation in renal interstitial fibroblasts stimulated with TGF-β1. We observed that TGF-β1-stimulated proliferation was significantly inhibited by NAC or melatonin (Figure 7A). Pretreatment with NAC or melatonin also decreased protein expression of collagen Ⅰ and α-SMA after TGF-β1 treatment (Figure 7B–D). Furthermore, immunofluorescent staining revealed that an elevation in α-SMA expression (Figure 7E) after TGF-β1 treatment was reversed by NAC as well as melatonin.
These molecules also suppressed nuclear localization of p-Smad2/3 (Figure 8A) and reversed increased expression of p-Akt, p-ERK1/2, and p-p38 (Figure 8B–E) invoked by TGF-β1. Taken together, these findings indicate that the suppressive effects of melatonin on fibroblast-myofibroblast transdifferentiation invoked by TGF-β1 is presumably attributed to the suppression of ROS-dependent mechanisms.

These results demonstrate that the pineal hormone melatonin prevents TGF-β1-stimulated transdifferentiation of fibroblasts to myofibroblasts by suppressing Smad and non-Smad signaling cascades. These effects of melatonin were attributed to the deactivation of ROS-mediated mechanisms in its receptor-independent manner. These results strengthen the idea that melatonin may be a promising preventive option against fibrotic diseases. 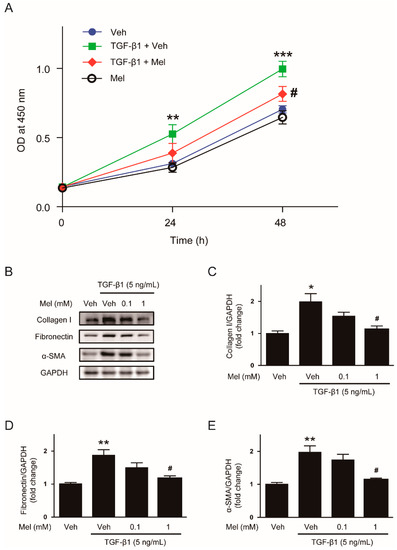 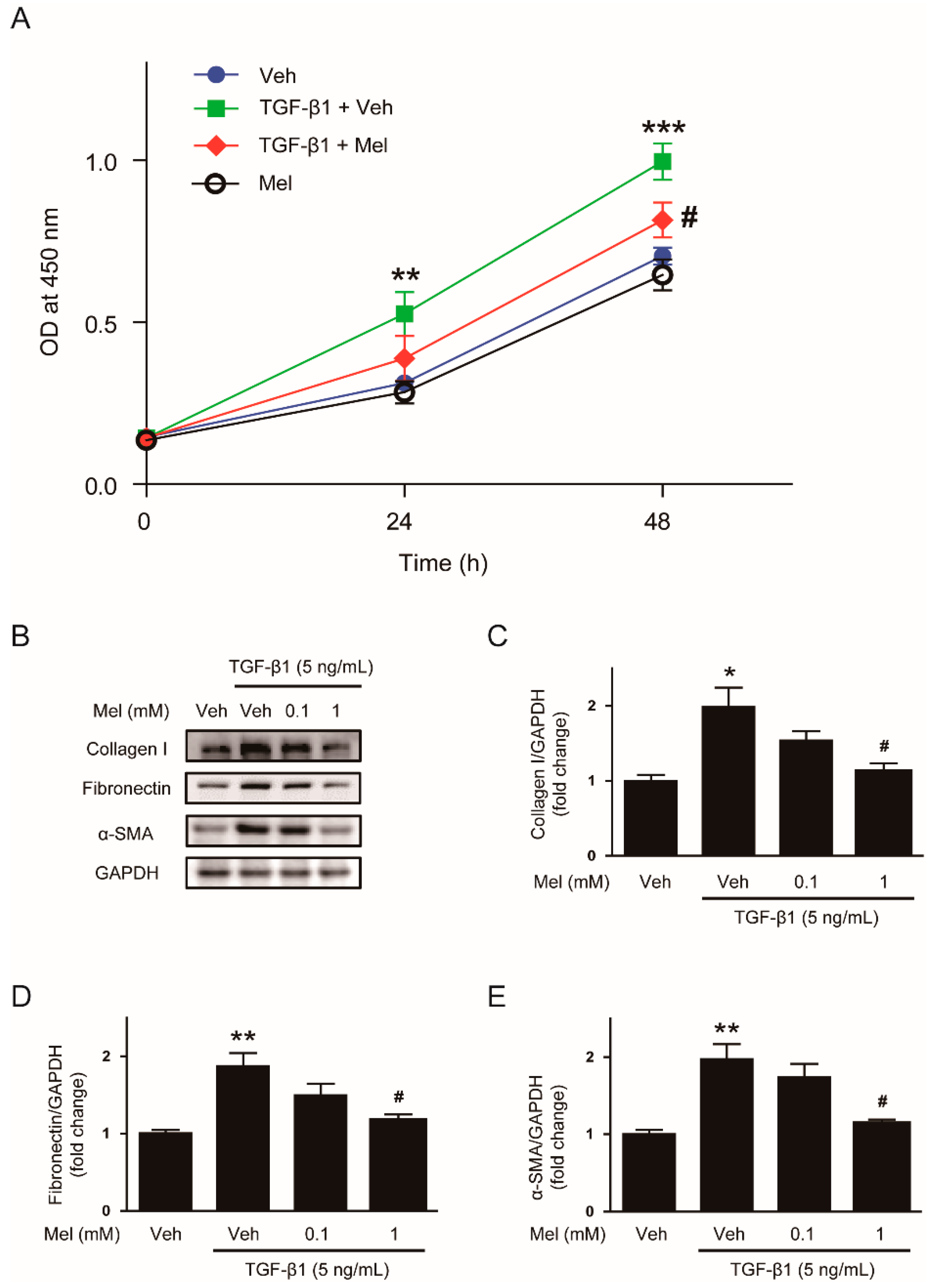 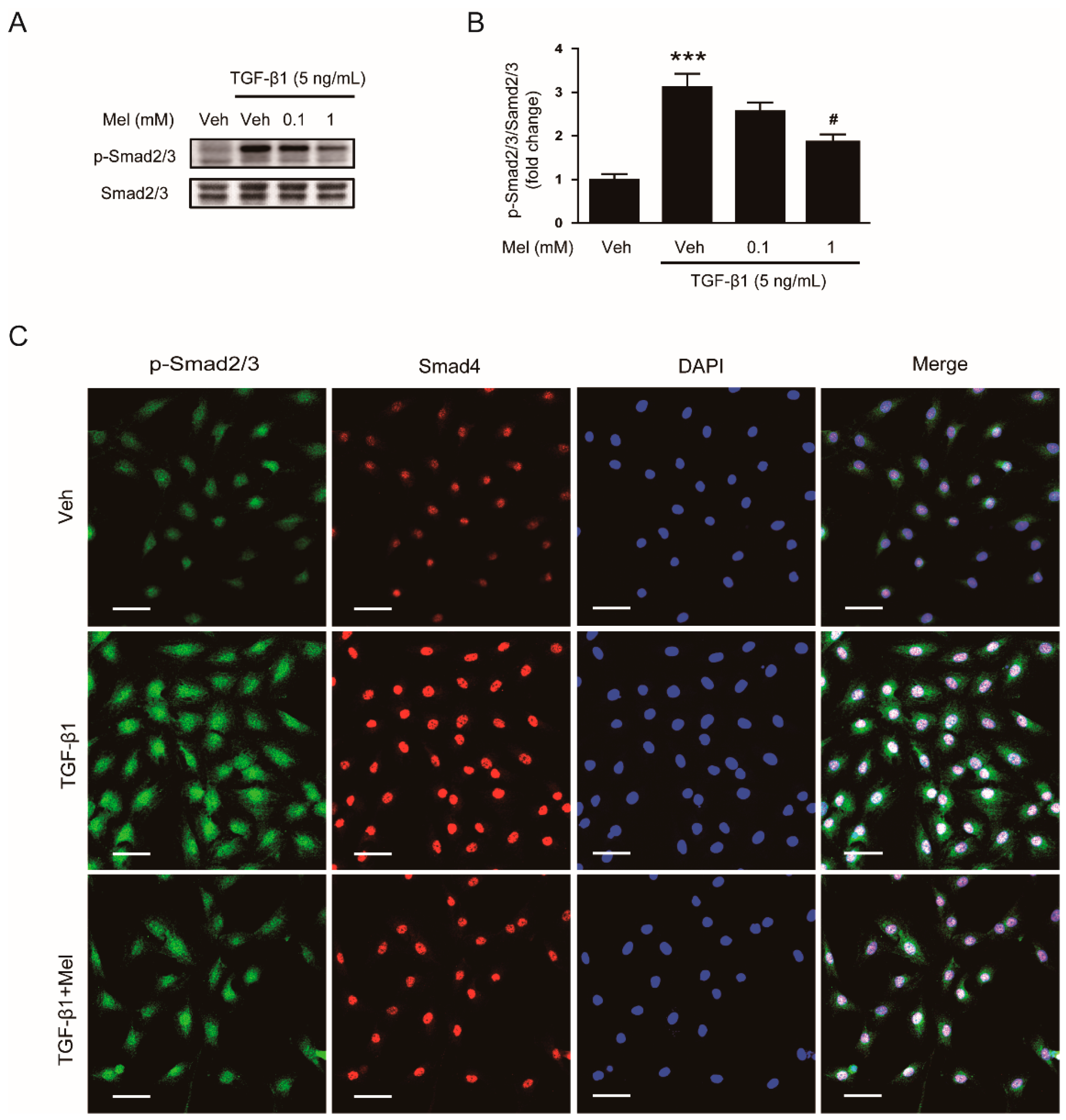 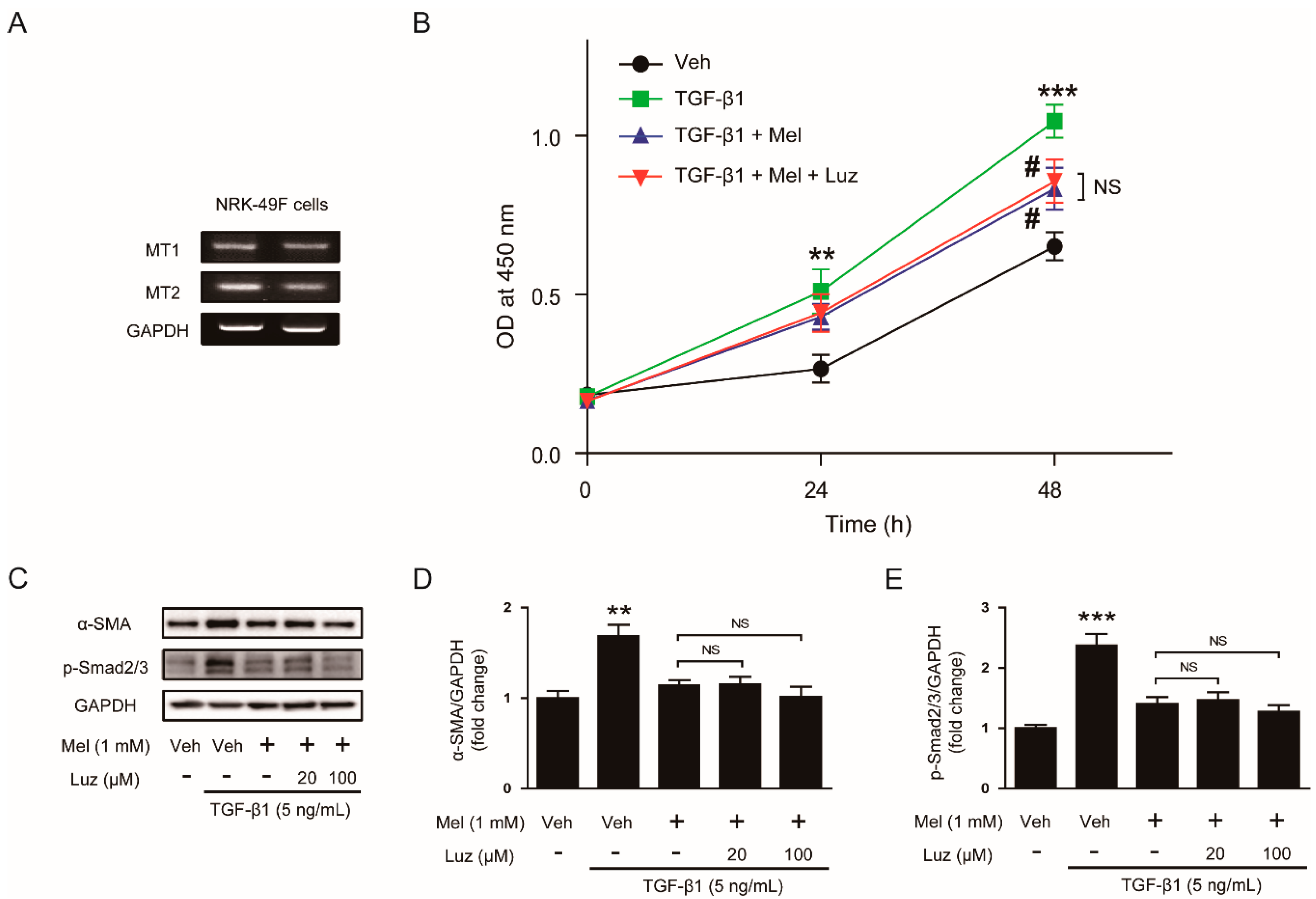 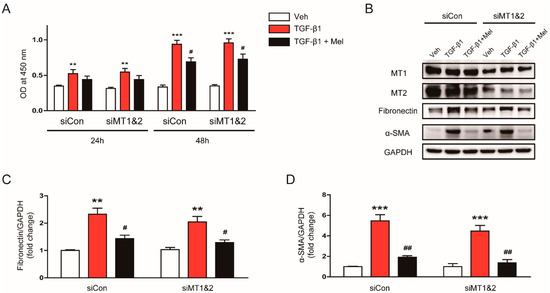 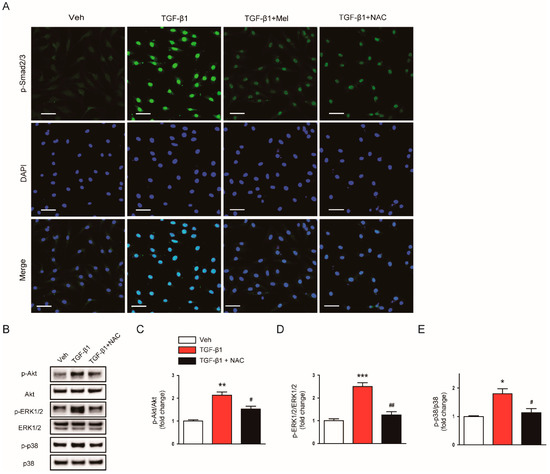 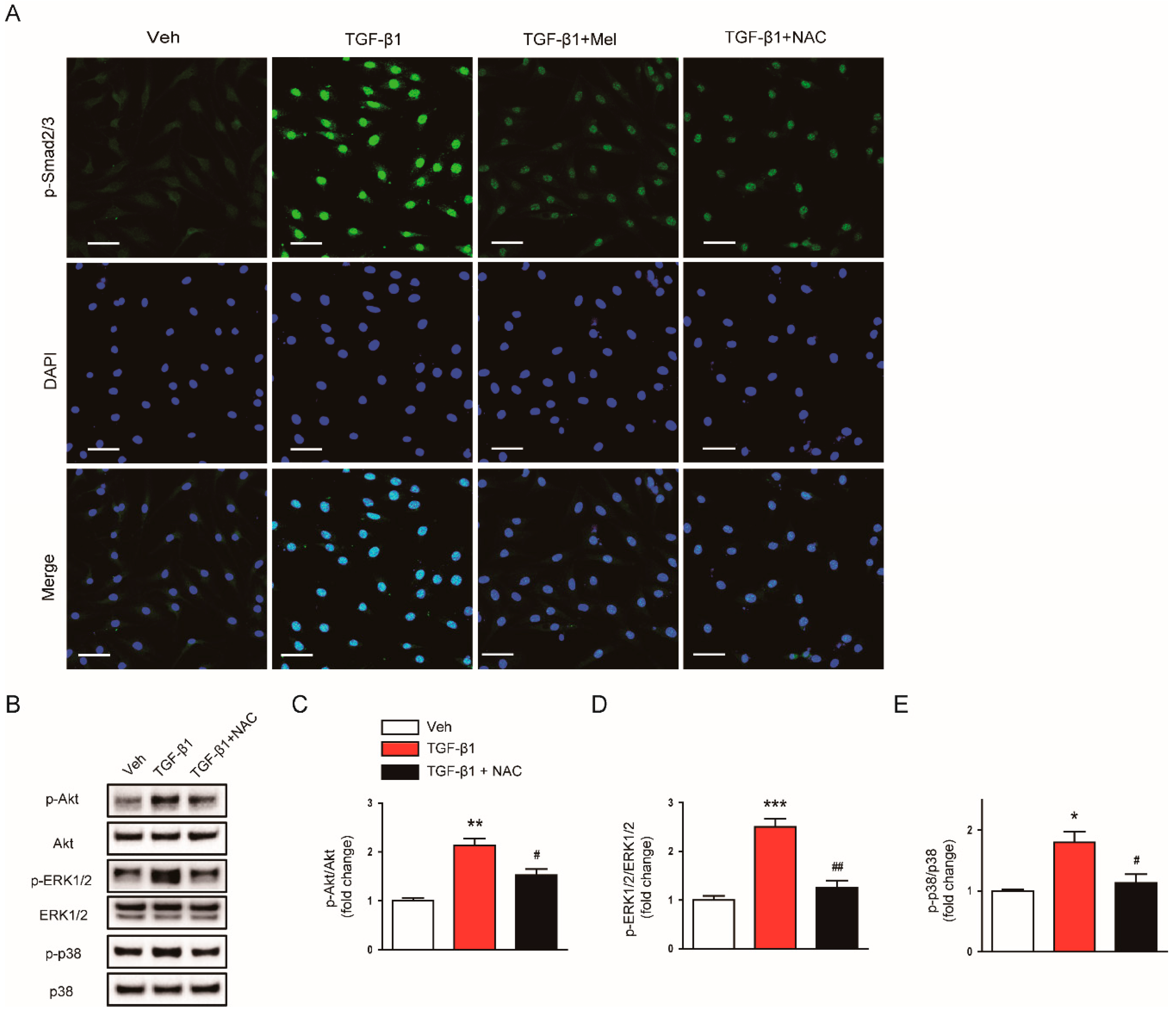