Evaluation of the AGE/sRAGE Axis in Patients with Multiple Myeloma

Glycation is a common reaction that happens in most cells between a carbonyl group (–C=O) of the reducing sugars and the amino group (–NH2) of proteins, initially leading to the creation of an unstable substance known as Schiff’s base. Schiff’s bases are short-lived and susceptible to a reverse reaction that causes the reconstruction of original reactants. They have a predisposition to undertake re-arrangement of atoms causing the development of Amadori products [1,2]. These are more durable than Schiff’s base and more prone toward the forward reaction. Furthermore, they undergo cyclization and dehydration to produce advanced glycation end products (AGEs), although AGEs can also be produced during the oxidation of lipids or nucleotides. AGEs are responsible for the onset and the evolution of several diseases, including obesity, nephropathy, diabetes, retinopathy, neuropathy, aging, and cardiovascular diseases [3].
Moreover, glycative stress caused by AGEs can considerably influence tumor progression. In fact, oxidative stress can stimulate several transcription factors, such as protein-53, activating protein-1, nuclear factor erythroid-2-related factor, hypoxia-inducible factor-1α, β-catenin/Wnt, and peroxisome proliferator-activated receptor-γ (PPAR-γ). Triggered transcription factors can conduct to about 500 diverse modifications in gene expression and can modify expression patterns of growth factors, regulatory cell cycle substances, and inflammatory and anti-inflammatory molecules. These changes of gene expression can stimulate a normal cell to become cancerous [4]. For instance, plasma concentrations of AGEs were augmented in subjects with breast cancer with respect to healthy subjects [5].
The most investigated AGE receptor is the multiligand receptor of the immunoglobulin super-family, coded in the Class III region of the major histocompatibility complex, known as the receptor of AGE (RAGE). Several in-vivo and in-vitro investigations have been centered on the cancer-promoting actions of the AGE–RAGE relationship, believed to be a decisive link between tumors and chronic inflammation. Several studies have evaluated the specific action of RAGE in controlling pro-tumorigenic pathways in immune and cancer cells, and in the microenvironment of a tumor [6,7,8], and stimulation of RAGE by AGEs was shown to increase growth or migration of melanoma and pancreatic cancer cells [9]. RAGE was upregulated in colorectal, esophageal, and oral squamous cell carcinoma. In these conditions, it acted as an oncoprotein [10].
RAGE is present at low concentrations in a broad range of adult cells, while it is extremely expressed in embryonic cells [11]. RAGE is produced as both full-length, membrane-bound forms (fl-RAGE or mRAGE) and as several soluble products missing the transmembrane domain. Soluble RAGE (sRAGE) is generated by both proteolytic cleavage of fl-RAGE and alternative mRNA splicing [12,13,14]. In recent years, RAGE control has been evaluated in several human carcinomas. In breast cancer, it was recognized that subjects with better outcomes had higher sRAGE concentrations [15]. Finally, several studies have evaluated the action of glycative stress on the onset of various onco-hematologic diseases [16,17].
Multiple myeloma (MM) is an incurable disease provoked by the malignant growth of bone marrow plasma cells, whose pathogenesis is fundamentally unknown. However, it is a hematological tumor with underlying causes connected to augmented oxidative stress. In a previous study, we evaluated the plasma concentrations of advanced oxidation protein products (AOPPs) and protein nitrosylation in order to measure the oxidative stress in untreated MM subjects and in subjects affected by monoclonal gammopathy of uncertain significance (MGUS) [18]. We demonstrated that plasma levels of AOPPs and S-nitrosylated proteins were considerably augmented in MM subject with respect to controls and to MGUS subjects. Moreover, we also studied serum concentrations of carbonyl groups, and these were notably higher in MM subjects as compared with healthy subjects, in particular in the more advanced stages of MM [19]. A recent study has shown that the concentrations of AGEs and RAGE are augmented in the saliva of MM subjects with bone lesions [20]. To the best of our knowledge, there are no works that have explored the soluble concentrations of RAGE in patients with MM. The aim of the present study was to evaluate the AGE/sRAGE axis in patients with MM compared to a healthy control group. We have also tried to detect the existence of correlations between this axis and the variables commonly used to evaluate MM.

The study was conducted at the Division of Hematology of the University Hospital of Messina “Policlinico G. Martino”, Italy.
The study was conducted according to good clinical and laboratory practice rules and according to the principles of the Declaration of Helsinki. Informed written consent was obtained after potential risks were explained to the subjects. The study was approved by the local ethics committee (Protocol No. 36/18 of 07/05/2018-resolution No. 887).
Blood samples were taken from 19 patients affected by MM (7 males and 12 females; mean age 71.63 ± 9.96) and from 16 sex-matched and age-matched healthy subjects (Table S1). The paraprotein class was immunoglobulin G (IgG) in 14 patients and A (IgA) in 5 patients (light chain k in 12 patients, lambda in 7 patients).
None of the patients were receiving chemotherapy or anti-inflammatory drugs. None of the patients or controls had symptoms of active infections, inflammatory diseases, diabetes, obesity, or hypertension. Multiple myeloma patients were characterized using the Durie Salmon system (3 patients were in stage I, 7 stage II, and 9 stage III), and the International Staging System (ISS) (7 patients were in stage I, 7 stage II, 5 stage III). All but one patient had lytic lesions.
Routine laboratory studies consisted of complete blood count with differential, platelet count, and blood chemistry including beta-2 microglobulin, renal and liver function tests, calcemia, serum albumin, and lactate dehydrogenase (LDH), as well as immunoglobulin, erythrocyte sedimentation rate (ESR), and bone marrow aspiration. Physical examinations and skeletal X-rays were performed at all times. Blood samples were immediately centrifuged at 14,000× g rpm for twenty minutes and aliquoted into 1.5 mL centrifugation tubes. Samples were stored at −20 °C until tested.

We decided to assess the fluorescent AGE by the spectofluorimetric method because fluorescent AGEs (fAGEs) are considered a subset remarkably representative of the entire AGE family and fAGEs can be easily assessed in sera [21,22]. Serum was diluted 1:5 with phosphate-buffered saline (PBS: pH 7.4), and fluorescence intensity was recorded at maximum emission (440 nm) upon excitation at 350 nm and expressed in arbitrary units (AU). The serum concentration of AGEs was normalized to the total protein amount determined by the Bradford assay and expressed in AU for protein gram. Each sample was analyzed in duplicate for determination (Tables S2 and S3).

Data were analyzed using SPSS (version 20.0, IBM corp., New York, NY, U.S.A.) and stated as mean ± standard deviation or as median and interquartile range [IQR 0.75–0.25] when the variables were not-normally distributed. A p value of less than 0.05 was considered statistically significant. The difference between experimental conditions was evaluated by the Wilcoxon non-parametric test. The comparison of different types of heavy and light chain with sRAGE was performed using the non-parametric Kruskal Wallis test. When the results of the Kruskal-Wallis test were statistically significant, a comparison of groups was achieved using the non-parametric Wilcoxon rank-sum test.
Multiple linear regression analysis was used to develop a model for predicting sRAGE and AGE values from MM parameters with the highest correlation. 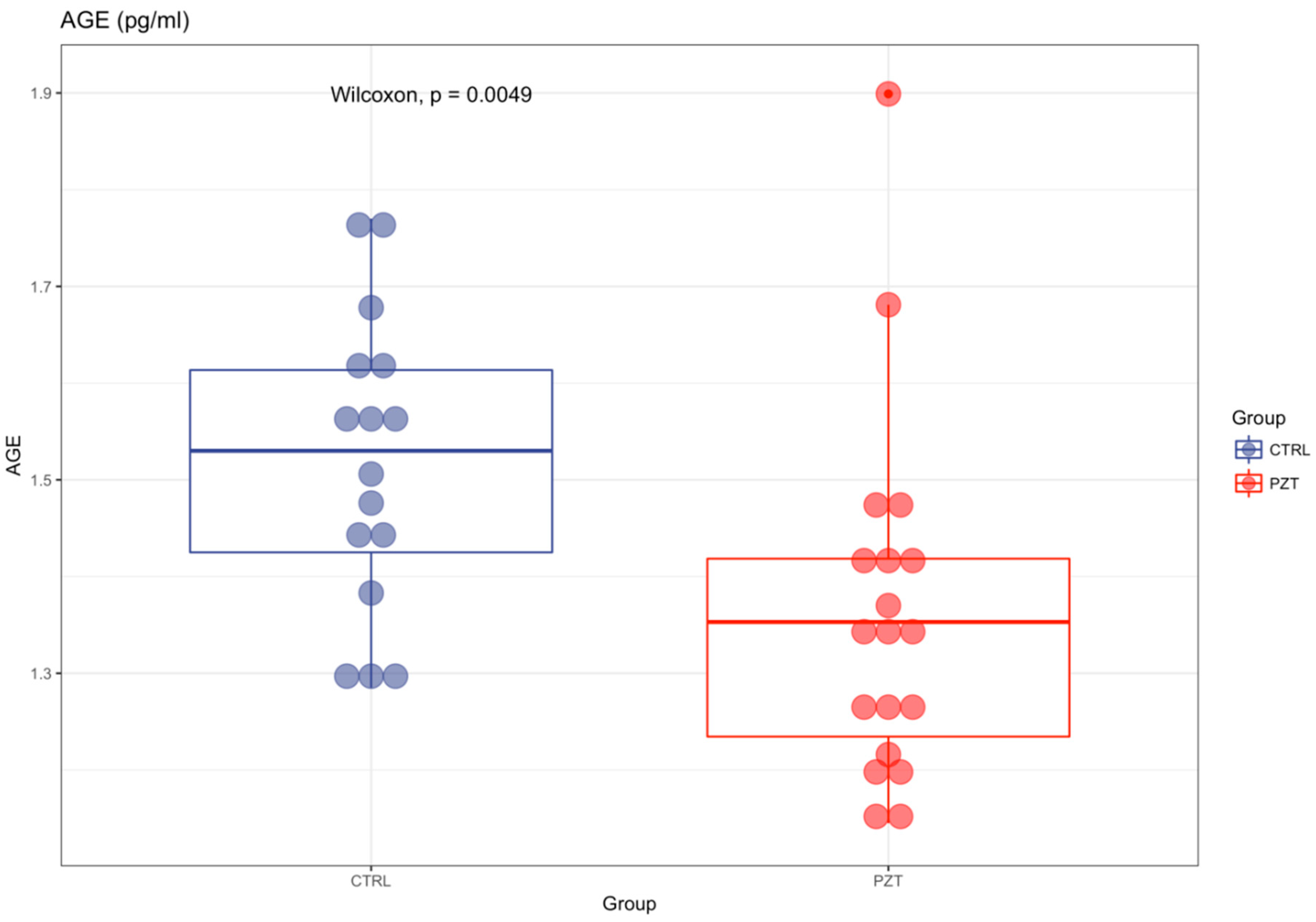 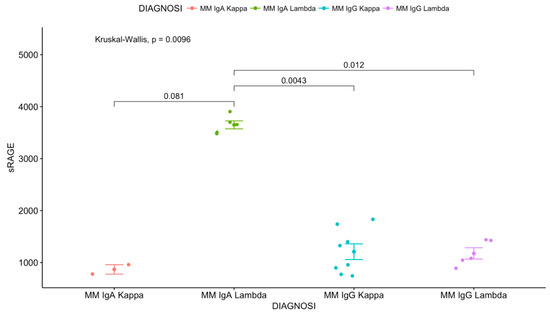 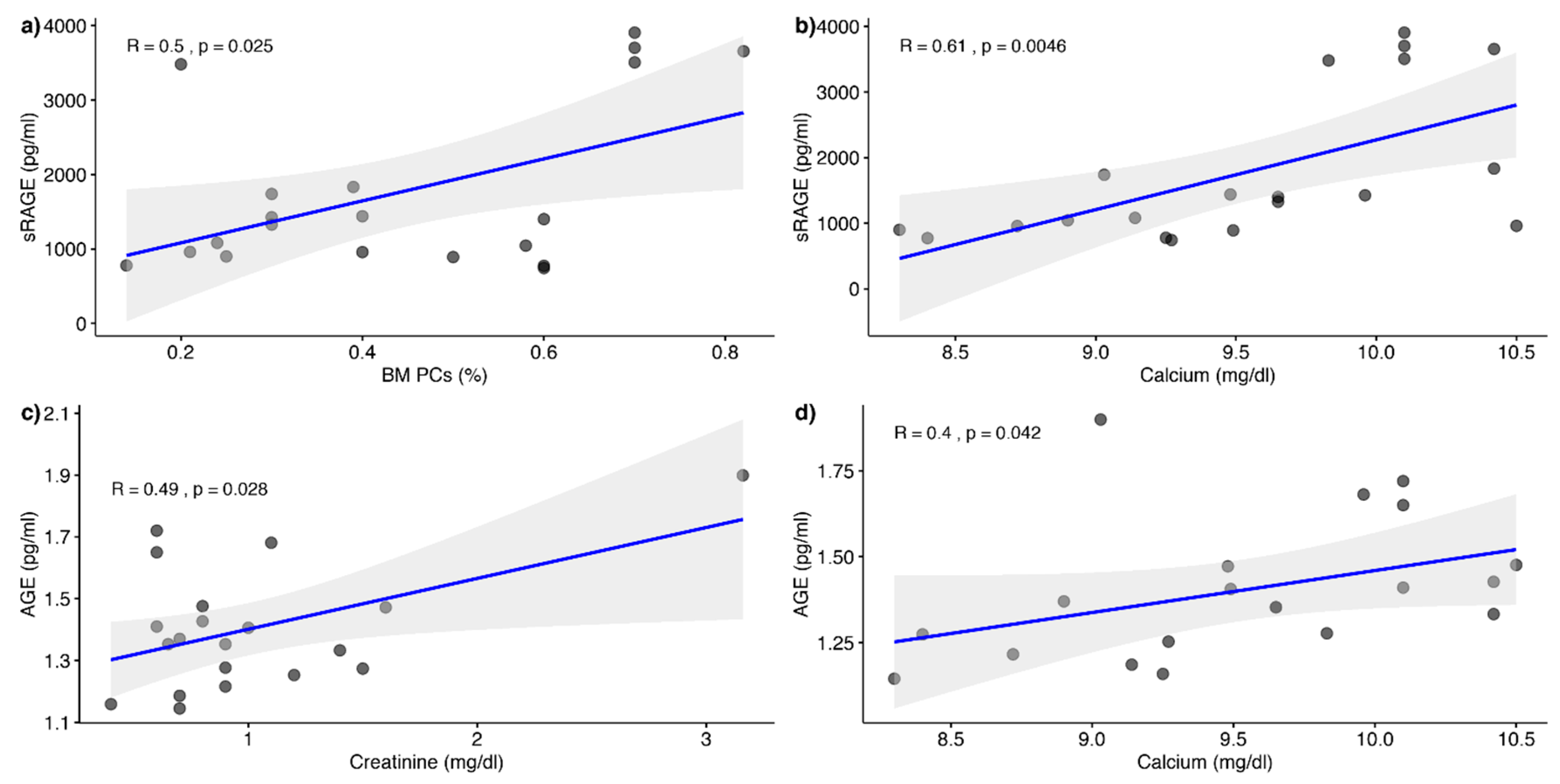