:
Hyperbaric oxygen therapy (HBOT) is frequently used after soft tissue injuries and in diabetic patients with ulcerated wounds; however, its ability to increase oxidative stress casts doubts. Diabetes (DM) in male Wistar rats (N = 20) weighing 300 g were induced by a single dose of streptozotocin. Ten diabetics (DMHBOT) and 10 controls (CHBOT) underwent a one-hour long hyperbaric oxygen treatment protocol (2.5 bar) 12 times after the 3rd week of diabetes. Ten animals remained untreated. Eight weeks after diabetes induction, we measured the 24-hour blood glucose profile and cardiovascular function (sonocardiography and the relaxation ability of aortae). Malonyl-dialdehyde (MDA) and cytokine levels were measured in blood plasma. Poly(ADP-ribose) polymerase (PARP) activity was estimated in cardiac and aortic tissue. HBOT did not alter most of the cardiovascular parameters. PARylation in cardiac and aortic tissues, plasma MDA levels were elevated in diabetic rats. HBOT prevented the increase of MDA in diabetic animals. In addition, levels of the pro-inflammatory cytokine-induced neutrophil chemoattractant-1 (CINC-1) the levels of anti-inflammatory tissue inhibitor of metalloproteases-1 were not altered in diabetes or in hyperoxia. Our results suggest that HBOT does not increase long-term oxidative stress, and, similar to training, the TBARS products, nitrotyrosine formation and poly(ADP-ribosyl)ation may be eased as a result of hyperoxia.
Keywords:
diabetes; HBOT; oxidative stress; PARP; endothelial dependent relaxation; cardiac ultrasound; rat

Hyperbaric oxygen therapy (HBOT) is a frequently applied remedy for soft tissue injuries [1] and it seems to be an effective way of enhancing wound healing in diabetic patients [2]. As a result of HBOT, plasma oxygen content and tissue oxygenation get into the normal range even in the depth of ulcerated wounds. HBOT also mobilizes stem cells, such as endothelial progenitor cells, therefore, may represent a therapeutic aid for revascularization [3]. However, as available oxygen content increases in the core of the body, cardiovascular oxidative damage may emerge as a possible consequence of HBOT [4,5].
Elevated oxidative-nitrative stress can be detected in diabetic patients and alternative glucose metabolic pathways emerge. As a result, inflammatory processes are initiated and a further increment of oxidative-nitrative stress is detectable too. All these processes contribute to increasing the probability of cardiovascular damage. Therefore the possible adverse effects of hyperbaric oxygen therapy (HBOT) on oxidative balance and consequently on the cardiovascular system in diabetes raise questions [5].
The effects of hyperoxia on cardiovascular parameters and cytokine production are contradicting. Elevation of reactive species formation during HBOT is proven in animal models and human studies [6,7,8] but it has not been established yet whether this elevation is preserved days or even weeks after the cessation of HBOT. The concern is that elevated reactive radical formation may lead to the worsening of chronic inflammation and cardiovascular status. According to the metanalysis of de Smet et al., the short-term outcome of HBOT is a significant reduction of wound area; however, the research team warns us about the possible long-term side effects due to increased oxidative stress [9]. On the other hand, HBOT has a hormetic effect that may lead to increased antioxidant capacity. It is sought that HBOT reduces neutrophil-endothelial adhesion [10] through inhibiting neutrophil recruitment; also, matrix metalloproteinase activation is abated [11]. Therefore, it is possible that the net result of HBOT is decreased inflammation and consequently improved cardiovascular function [12].
Poly(ADP-ribosyl)ation (PARylation) is a ubiquitous consequence of emerging oxidative and nitrative stress. Superoxide reacts with nitric oxide (NO), resulting in peroxynitrite (ONOO−) formation and the produced reactive species attack DNA, causing single- and double-stranded breaks. These breaks are recognized by poly(ADP-ribose) polymerase 1 (PARP), that builds up long, branching chains of poly(ADP-ribose) (PAR) from NAD+. The subsequent loss of NAD+ leads to ATP depletion and cell death. Lower but steady PARylation of nuclear proteins may help DNA repair but also increase NF-κB expression and cytokine production; therefore constant PARP activation leads to chronic inflammation too. Increased cytokine production activates immune cells and keeps up oxidative and nitrative stress, leading to a vicious cycle [13,14].
Previously it was shown that PARylation increased following hyperbaric oxygen treatment [15] only when 50 atm of oxygen pressure was applied. In a rat model of severe acute pancreatitis, HBOT along with PARP-inhibition had an additive effect [16]; however, long-term consequences of HBOT on PARylation has not been assessed before.
In the presented study, we estimated the effect of HBOT in a rat model of fully developed type1 diabetes on the cardiovascular system, cytokine production, oxidative stress and subsequent PARylation.

Mean blood sugar levels (Figure 2) were significantly elevated in both diabetic groups 3 weeks after the induction of diabetes mellitus. Right after the completion of the HBOT regimen, there was no significant difference between the two diabetic groups. However, weeks later the effect of HBO sessions on the blood glucose level of the DM HBOT group was traceable. The area under the glucose curve was significantly smaller in the DM HBOT group compared to the DM group. No significant differences were observed between the non-diabetic groups. The levels of HbA1C were elevated in the two diabetic groups, whereas in non-diabetic rats HbA1c levels were under the detectable limit of 4%. HBOT caused a tendentious decrease in the HbA1c levels of diabetic rats, although it was below significance (DM: 8.26 ± 0.18% v.s. DM HBOT: 7.75 ± 0.24%; p = 0.115).
The cardiac parameters at the 8th week of diabetes were altered in all diabetic rats. Ejection fraction, stroke volume and fractional shortening were significantly lower in both diabetic groups; however, end diastolic volume was only reduced in the not treated diabetic animals. HBOT did not influence the cardiac parameters of non-diabetic rats. However, HBO-treated diabetic animals showed less worsening of EDV compared to non-treated diabetics (Figure 3). HBOT did not alter ejection fraction, stroke volume or fractional shortening measured under anesthesia.
Phenylepinephrine induced contraction of aortic rings was not influenced by any treatment (Figure 3). Acetylcholine induced relaxation ability of the aortae deteriorated in DM rats compared to non-diabetic controls. There was no detectable difference between endothelium-mediated relaxation between HBO-treated and non-treated animals (Figure 3).
The poly(ADP-ribosyl)ation of cardiac walls and aortic endothelia were elevated in untreated diabetic animals. Peculiarly, PAR staining remained unaltered in the cardiovascular system of non-diabetic rats and HBOT treatment prevented the increase of tissue protein PARylation in diabetic rats. (Figure 4) To assess whether PARP-1 expression or activity was altered as the result of diabetes and hyperbaric oxygen, protein levels of PARP-1 were estimated by Western blot analysis (heart) and immunohistochemistry (aortic endothel). There was no detectable change in PARP expression on the protein level in aortic endothel or cardiac tissue.
Without HBOT, plasma MDA levels were higher in diabetic rats compared to controls that underwent HBOT; this difference was attenuated in DM HBOT rats. The plasma levels of pro-inflammatory cytokines CINC-1 levels were sensitive to diabetes and hyperbaric oxygen (p = 0.0167); however, between-group statistical differences could not be determined. The anti-inflammatory TIMP-1 was not altered by diabetes in the lack or presence of HBOT (DM vs. DM HBOT p = 0.0214) (Figure 5).

As the present study was carried out on a group of healthy rats as well as on rats with increased cardiovascular risk and chronic subclinical inflammation, we can estimate that athletes, who typically have better cardiopulmonary health, do not develop more severe complications than diabetic patients while undergoing HBOT; therefore, similar results should be replicated in human athletes and patients with type 1 diabetes, then diabetic athletes who suffered sport-related injury might also undergo hyperbaric oxygen therapy. Likewise, diabetic patients may be treated with hyperbaric oxygen without significantly elevating their risk of worsening cardiac status. To summarize our findings, the results are in line with most of recent findings, that hyperbaric treatment may rather decrease oxidative stress in different conditions. This decrement is obviously detectable in our diabetic model, too. To assess whether this hypothesis is viable in humans, further observational approaches are needed. On the other hand, alterations of carbohydrate household did not reach the level of significance as a response to HBOT, possibly due to the short-term experimental settings. Correlations between cardiovascular status and tissue poly(ADP-ribozyl)ation were diminished in HBOT diabetic rats, because PARP activity was reduced without significant alterations in endothelial and heart functions. Considering the decreased pro-inflammatory LIX and CINC-1 expression, this may mean that HBOT breaks the vicious cycle formed by subclinical inflammation, oxidative stress and PARP activation.

The research team is grateful to Zoltán Benyó for providing the wire myograph to our team. 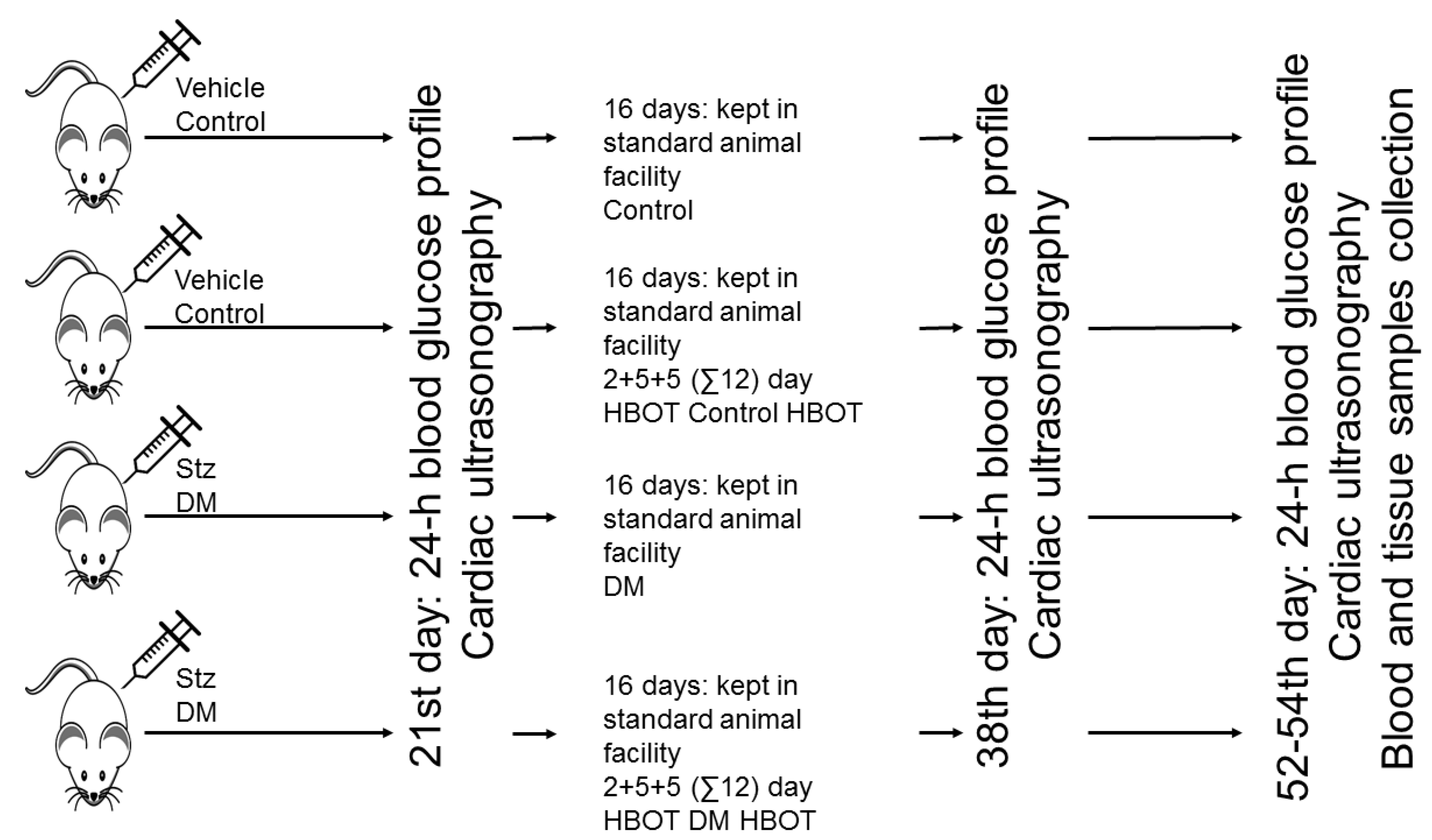 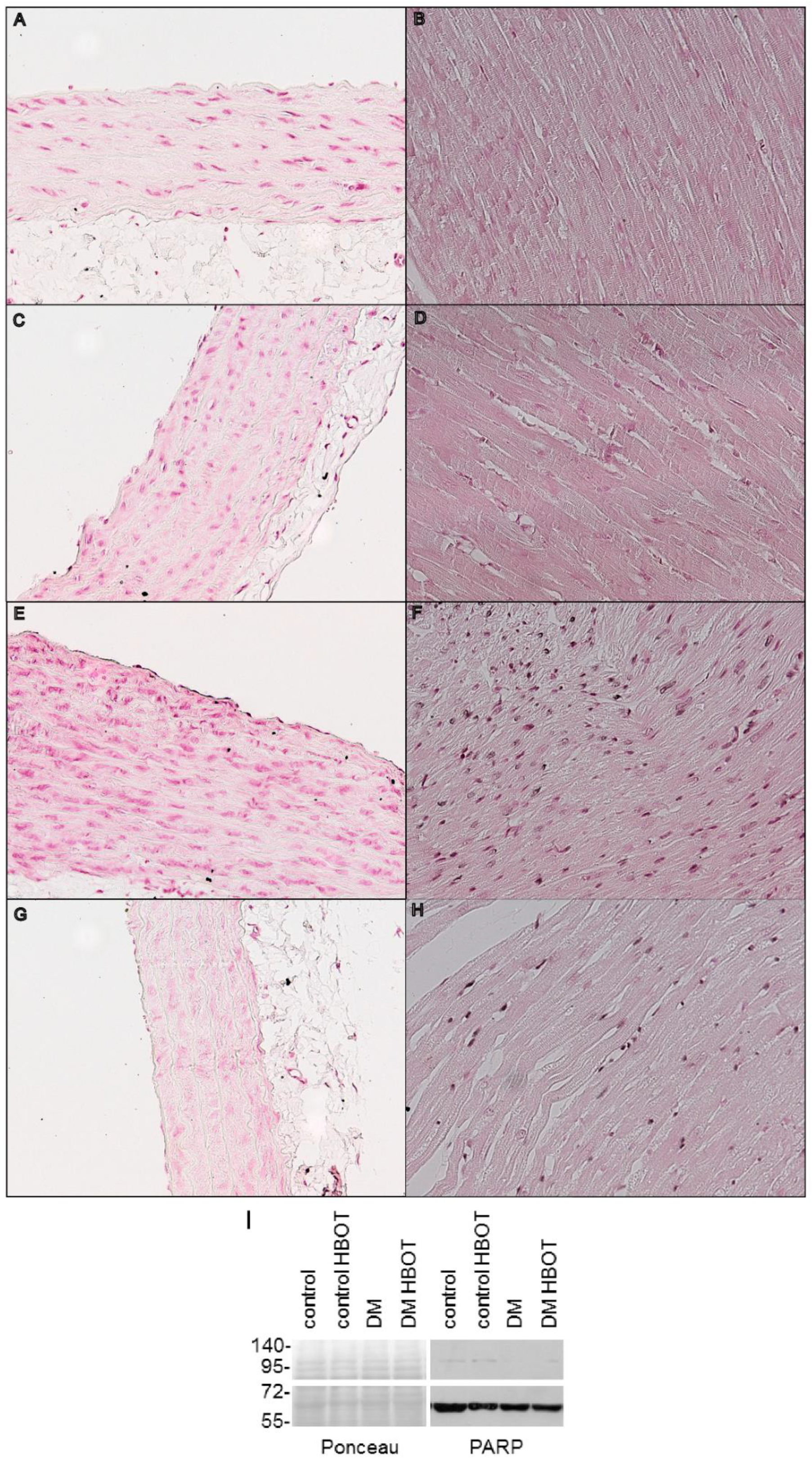