In Vitro and In Vivo Antioxidant Activities of Polysaccharides Isolated from Celluclast-Assisted Extract of an Edible Brown Seaweed, Sargassum fulvellum
Next Article in Special Issue

Phenolic Composition of Hydrophilic Extract of Manna from Sicilian Fraxinus angustifolia Vahl and its Reducing, Antioxidant and Anti-Inflammatory Activity in Vitro
Previous Article in Journal

Isolation of Phytochemicals from Bauhinia variegata L. Bark and Their In Vitro Antioxidant and Cytotoxic Potential

Plants have been the basis of traditional medicine since the dawn of civilizations. Different plant parts possess various phytochemicals, playing important roles in preventing and curing diseases. Scientists, through extensive experimental studies, are playing an important part in establishing the use of phytochemicals in medicine. However, there are still a large number of medicinal plants which need to be studied for their phytochemical profile. In this study, the objective was to isolate phytochemicals from bark of Bauhinia variegata L. and to study them for their antioxidant and cytotoxic activities. The bark was extracted with methanol, followed by column chromatography and thus isolating kaempferol, stigmasterol, protocatechuic acid-methyl ester (PCA-ME) and protocatechuic acid (PCA). 2,2-azinobis-3-ethyl-benzothiazoline-6-sulfonic acid (ABTS) and 2, 2’-diphenyl-1-picrylhydrazyl radical (DPPH) radical scavenging assays were utilized for assessment of antioxidant activity, and 3-(4,5-dimethylthiazol-2-yl)-2,5-diphenyl tetrazolium bromide (MTT) dye reduction assay was used to determine cytotoxic activity against C-6 glioma rat brain, MCF-7 breast cancer, and HCT-15 colon cancer cell lines. The compounds were found to have significant antioxidant and cytotoxic activity. Since there is a considerable increase in characterizing novel chemical compounds from plant parts, the present study might be helpful for chemotaxonomic determinations, for understanding of medicinal properties as well as for the quality assessment of herbal supplements containing B. variegata bark, thus establishing its use in traditional medicine. View Full-Text
Keywords: antioxidative system; anti-cancer compounds; oxidative stress; polyphenols; phytochemicals antioxidative system; anti-cancer compounds; oxidative stress; polyphenols; phytochemicals
►▼ Show Figures 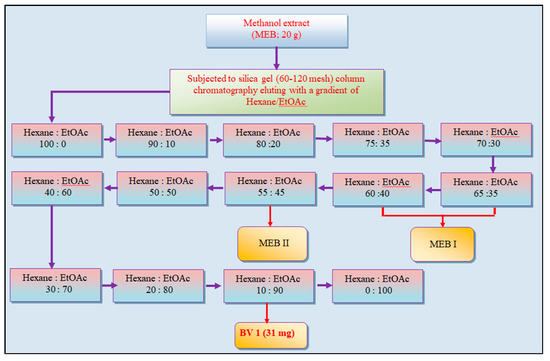