The Extract of D. dasycarpus Ameliorates Oxazolone-Induced Skin Damage in Mice by Anti-Inflammatory and Antioxidant Mechanisms
Next Article in Special Issue

The aim of this study was to investigate the effects of 6-week beta-hydroxy-beta methylbutyrate-free acid (HMB-FA) supplementation on oxidative stress and biochemical variables in responses to resistance training. Sixteen healthy young males participated in this study and were randomly assigned to a HMB-FA supplementation group (n = 8) or a placebo supplementation group (n = 8). The resistance training program was applied for 6 weeks with two sessions per week. Blood samples were collected before and after training, and 8-hydroxy-2-deoxyguanosine (8-OHdG), malondialdehyde (MDA), protein carbonyl (PC), and biochemical variables, such as alanine transaminase (ALT), aspartate aminotransferase (AST), alkaline phosphatase (ALP), and the numbers of total white blood cells (WBC), neutrophils, lymphocytes, and monocytes were analyzed. Following intervention, both the HMB-FA and placebo supplementation groups showed significant decreases in MDA (effect size [ES]; −0.39, −0.33) and PC (ES; −1.37, −1.41), respectively. However, 8-OHdG did not change after 6 weeks of training in any of the groups. In addition, both groups showed similar training effects on biochemical variables after 6 weeks of intervention. It was concluded that HMB-FA supplementation during resistance training did not add further adaptive changes related to oxidative stress markers. View Full-Text
Keywords: leucine; strength training; free radicals; oxidative stress leucine; strength training; free radicals; oxidative stress
►▼ Show Figures 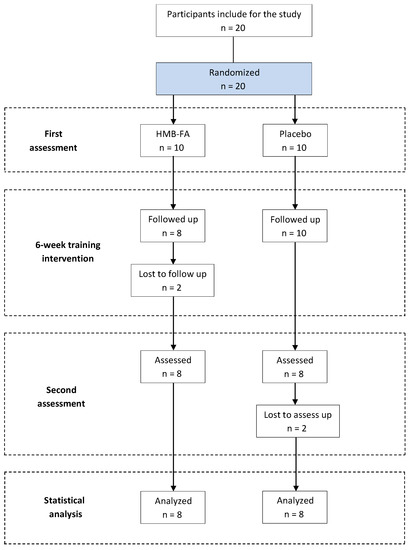