Appropriate Handling, Processing and Analysis of Blood Samples Is Essential to Avoid Oxidation of Vitamin C to Dehydroascorbic Acid

Influence of Vitamin C on Lymphocytes: An Overview

Vitamin C or ascorbic acid (AA) is implicated in many biological processes and has been proposed as a supplement for various conditions, including cancer. In this review, we discuss the effects of AA on the development and function of lymphocytes. This is important in the light of cancer treatment, as the immune system needs to regenerate following chemotherapy or stem cell transplantation, while cancer patients are often AA-deficient. We focus on lymphocytes, as these white blood cells are the slowest to restore, rendering patients susceptible to often lethal infections. T lymphocytes mediate cellular immunity and have been most extensively studied in the context of AA biology. In vitro studies demonstrate that T cell development requires AA, while AA also enhances T cell proliferation and may influence T cell function. There are limited and opposing data on the effects of AA on B lymphocytes that mediate humoral immunity. However, AA enhances the proliferation of NK cells, a group of cytotoxic innate lymphocytes. The influence of AA on natural killer (NK) cell function is less clear. In summary, an increasing body of evidence indicates that AA positively influences lymphocyte development and function. Since AA is a safe and cheap nutritional supplement, it is worthwhile to further explore its potential benefits for immune reconstitution of cancer patients treated with immunotoxic drugs. View Full-Text
Keywords: vitamin C; ascorbic acid; lymphocytes; natural killer cells; NK cells; B cells; T cells vitamin C; ascorbic acid; lymphocytes; natural killer cells; NK cells; B cells; T cells
►▼ Show Figures 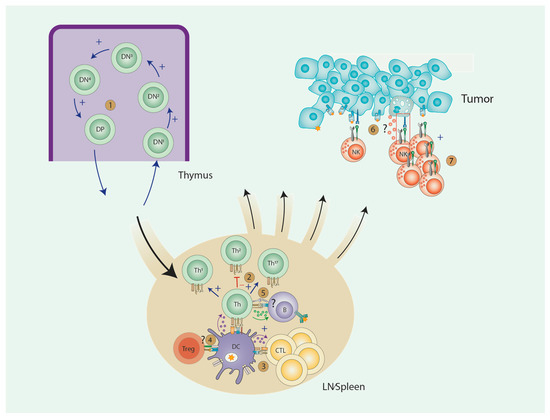