Regulation of Mitochondrial Dynamics by Proteolytic Processing and Protein Turnover

Proper mitochondrial function depends on effective quality control of this organelle. Defects in mitochondrial quality control leads to aberrant mitochondrial structure or complete mitochondrial dysfunction. The quality control of mitochondria is mediated by turnover of mitochondria by mitophagy or mitochondrial proteins by the ubiquitin protease system (UPS) or intra-mitochondrial proteolytic systems. Polyubiquitylation of proteins signals for destruction by the UPS, which can occur due to loss of protein structure or function or as part of regulation of signal transduction pathways. In human cells, immunocapture of ubiquitin-tagged and associated proteins revealed that 38% had a mitochondrial localization [40]. Ubiquitin tagging does not only signal for protein degradation but is also used in signal transduction pathways; therefore, the relative amount of proteins targeted for UPS-dependent degradation is lower. Ubiquitin can modify target proteins by using specific lysine residues to form an isopeptide bond. Polymerization of the ubiquitin chain occurs by further addition of ubiquitin monomers onto specific lysine residues on the ubiquitin molecule, most commonly K48, K63, but also K11 and K6 [41]. These latter three modifications have been shown to be enriched on mitochondria after depolarization of the IMM, a consequence of mitochondrial dysfunction. These specific ubiquitin chains can signal to activate mitophagy to remove dysfunctional mitochondria. In the budding yeast, Saccharomyces cerevisiae, the UPS is required to maintain correct mitochondrial function under normal homeostatic conditions. When there are defects in the UPS, mitochondrial defects are observed by complete deletion of the SCF E3 ligase complex that ubiquitylates specific proteins, core proteasomal subunits responsible for proteasomal degradation, ubiquitin activating proteins and ubiquitin recognizing proteins [42]. These observations indicate that a constant turnover of mitochondrial proteins is required during standard fermentative growth conditions in yeast. Similar phenomena occur in mammalian models of disease when proteasomal function is inhibited or dysfunctional due to genetic alterations. Neurodegenerative diseases often display proteasomal defects due to the accumulation of neurotoxic molecules such as alpha-synuclein, beta-amyloid or mutant huntingtin which can act as inhibitors of proteasome activity or by overwhelming proteasome activity [43]. Proteasomal involvement in regulation of mitochondrial function is also demonstrated by a number of proteasome components and ubiquitin E3 ligases that associate on the surface of the OMM, such as IBRDC2 (in between ring fingers domain containing 2), FBXW7 (F-box/WD repeat containing protein 7), FBXO7 (F-box only containing protein 7), RFN185 in humans and Rsp5 and Dma1 in budding yeast (see references in [44]. Ubiquitylation of OMM proteins that expose domains and loops to the cytosol can result in one of two outcomes. Ubiquitylated proteins recruit adaptor proteins that then recruit ATPases to extract these proteins from the OMM or as a platform for the initiation of mitophagy. The decision between individual protein extraction or mitophagy is most likely dependent on the number of ubiquitylated proteins on the OMM. Mitochondria-derived vesicles are a recently described mechanism of mitochondrial quality control that target mitochondrial lipids and proteins to other membrane bound compartments such as the peroxisome, endosome and multi-vesicular bodies. These membrane structures are formed with the involvement of the PINK1 and Parkin proteins that act to ubiquitylate OMM surface proteins [45]. This close connection between the UPS and mitochondria indicates the importance of mitochondrial proteins and function to overall cellular physiology.
The action of UPS-dependent protein turnover in part determines protein stability, which can be measured by determining half-life and indicates the rate of protein loss regardless of mechanism of degradation. Three large scale studies have determined the half-lives of proteins in human cell lines and in budding yeast. Half-lives in human cells varied from 45 min to 22.5 h in 100 proteins. Yellow fluorescent protein-tagged proteins were followed and protein half-lives were determined by loss of bleached protein. Protein half-life determined by this method increased after treatments such as chemotherapeutic agents or inhibitors of transcription, especially for long-lived proteins. In budding yeast, two different approaches were used that resulted in conflicting half-lives for each protein. Following epitope-tagged proteins in yeast treated with cycloheximide gave an average half-life of ~43 min, with some as short as 4 min grown in complete media with glucose, while a proteomic approach, using a heavy isotope of lysine as a pulse, was diluted with non-radiolabelled lysine and displayed much longer half-lives, with a mean of 8.8 h with a cell doubling time of 2.5 h in glucose and synthetic media (Table 1) [46,47,48,49]. These studies indicate that there is selectivity of protein turnover as different proteins have different half-lives. This could be due to specific motifs for turnover in proteins, interactions between proteins, signals activating protein turnover or dilution during cell division.

OPA1 is an IMM-targeted GTPase involved in fusion of the IMM as well as cristae organization that can also localize to the IMS. The different localizations are due to differential splicing as well as proteolytic processing. OPA1 is proteolytically processed by OMA1, an IMM-resident zinc metallopeptidase, and YME1L, an IMM-resident ATP-dependent metalloprotease. The protease sites are not present in all of the eight different splice variants that exist in humans. The YME1L cleavage site is encoded in exon 5b which is not present in all OPA1 isoforms. Constitutive proteolytic processing by YME1L and/or OMA1 generates a balance of short and long isoforms that are released into the IMS or tethered to the IMM respectively. Upon alterations to mitochondrial physiology, such as loss of mitochondrial membrane potential, ATP depletion or induction of apoptosis, OPA1 is further proteolytically processed by OMA1 to generate the short isoforms of OPA1 that are released into the IMS and do not support mitochondrial fusion, resulting in overall mitochondrial fragmentation. This regulation of OPA1 allows for alterations in the mitochondrial network through post-translational mechanisms that are more rapid than changes in gene expression. Constitutive proteolytic cleavage of OPA1 by OMA1 occurs to balance the rates of mitochondrial fission and fusion to maintain mitochondrial function. The OMA1 cleavage site in OPA1 is C-terminal to alanine at residue 195 and generates short OPA1 isoforms that are not capable of mitochondrial fusion. The S2 site in OPA1 is cleaved by YME1L between the residues 217 and 223 (LQQQIQE) [50]. Under stressed conditions, OMA1 induces cleavage of OPA1 to generate short isoforms. To terminate this signal, OMA1 undergoes autoproteolytic cleavage and is degraded eventually, allowing the long isoforms to accumulate and allow mitochondrial fusion to occur again [51,52]. In the absence of OMA1, the short isoforms of OPA1 cannot be generated, and this results in a fragmented mitochondrial network. Reconstitution of different OPA1 isoforms into OPA1 deficient mouse embryonic fibroblasts demonstrated that both the long and short forms of OPA1 are required to restore a balance of mitochondrial dynamics [53]. OMA1 was first described in yeast as overlapping activity with m-AAA protease, but is not a functional homolog of the human OMA1. Human OMA1 does not rescue a OMA1 deficient yeast strain from respiratory deficiency when also deleted with YME1, the YME1L homolog. The activation and autocatalytic degradation of the human OMA1 expressed in yeast was also induced by loss of mitochondrial membrane potential indicating a domain present in human OMA1 that is sensitive to mitochondrial membrane potential. The amino-terminal domain of human OMA1 is much longer than that of yeast and may contain this domain [51]. Yeast OMA1 still undergoes autoproteolysis after stress induction that is dependent on a carboxy terminal domain involved in stabilization of a homo-oligomeric complex [54]. In yeast, the OPA1 homolog is MGM1 (mitochondrial genome maintenance 1) which also undergoes proteolytic processing to generate two isoforms—one short and one long. The long isoform also has a trans-membrane domain and is tethered to the IMM, while the short isoform is soluble in the IMS. MGM1 is proteolytically processed to generate the short isoform by the PCP1 (processing of cytochrome c peroxidase 1) IMM protease and not OMA1. Similar to OPA1, both MGM1 isoforms are required for a balance of mitochondrial dynamics. PCP1 is homologous to serine proteases, such as rhomboid found in drosophila [55]. The phenotypic consequences of PCP1 deletion seem to be entirely due to lack of MGM1 processing and generation of the short isoform of MGM1. When only short MGM1 is introduced into PCP1 deletion, strains of yeast mitochondrial morphology are partially restored and prevent the loss of mitochondrial DNA caused by defective mitochondrial fusion. In yeast, the balance between long and short forms of MGM1 is also regulated by PSD1, (phosphatidylserine decarboxylase 1) in the IMM that produces phosphatidylethanolamine, indicating regulation of MGM1 processing by mitochondrial lipid composition and indicating the activity of PCP1 is regulated by lipid composition [56] (Figure 1 and Figure 2).
A less well characterized protein, MTP18 (mitochondrial protein of 18 kilodaltons), is a fission factor embedded in the IMM that is conserved in metazoans [57]. Genetic deletion of this protein results in hyperfused mitochondria and overexpression results in excessive mitochondrial fission. MTP18 protein expression is dependent on Phosphatidylinositol 3-kinase activity, and inhibition of this pathway results in loss of MTP18. After serum withdrawal or inhibition of PI3K (phosphatidylinositol 3-kinase) by the small molecule inhibitor LY294002, MTP18 protein decreases in expression by 50% in approximately 5 h and 48 h, respectively [58]. The stability of this protein has not been interrogated, and further study is required to determine whether MTP18 expression is regulated like other mitochondrial dynamic proteins.

The maintenance of a balanced mitochondrial network depends on the action of many different types of proteins that reside in the IMM, IMS, OMM and cytosol. The abundance of these proteins determines whether mitochondrial will undergo fragmentation or fusion. In addition to tissue-specific expression, mitochondrial dynamics proteins do not all possess the same stability, due to different half-lives and ubiquitylation. These post-translational mechanisms of protein expression are therefore subject to complex regulation to ensure that a co-ordinated phenotype of mitochondrial fragmentation or fission is achieved. In addition to the turnover of proteins, proteolytic processing of OPA1/MGM1 in the IMM is a crucial regulator of mitochondrial IMM fusion. Putting these together, there is still much more to uncover regarding the co-ordinated regulation of mitochondrial dynamics of which protein proteolysis and stability are crucial components.

We would like to thank former NYIT undergraduate student Zoha Mian for developing projects on mitochondrial dynamics in the laboratory of GPM that inspired this review article. 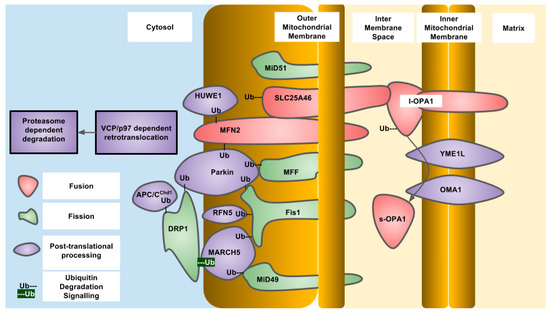 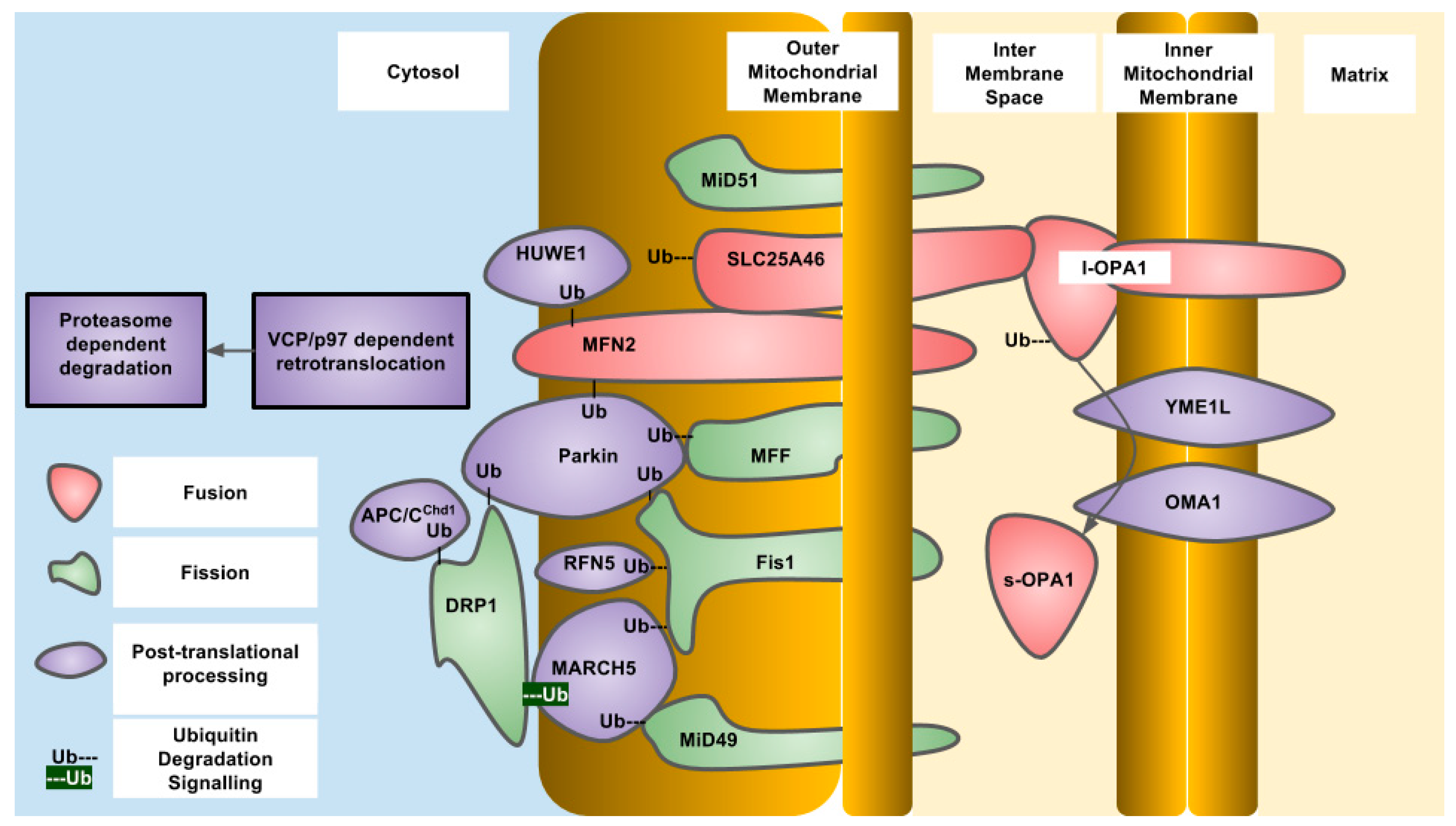 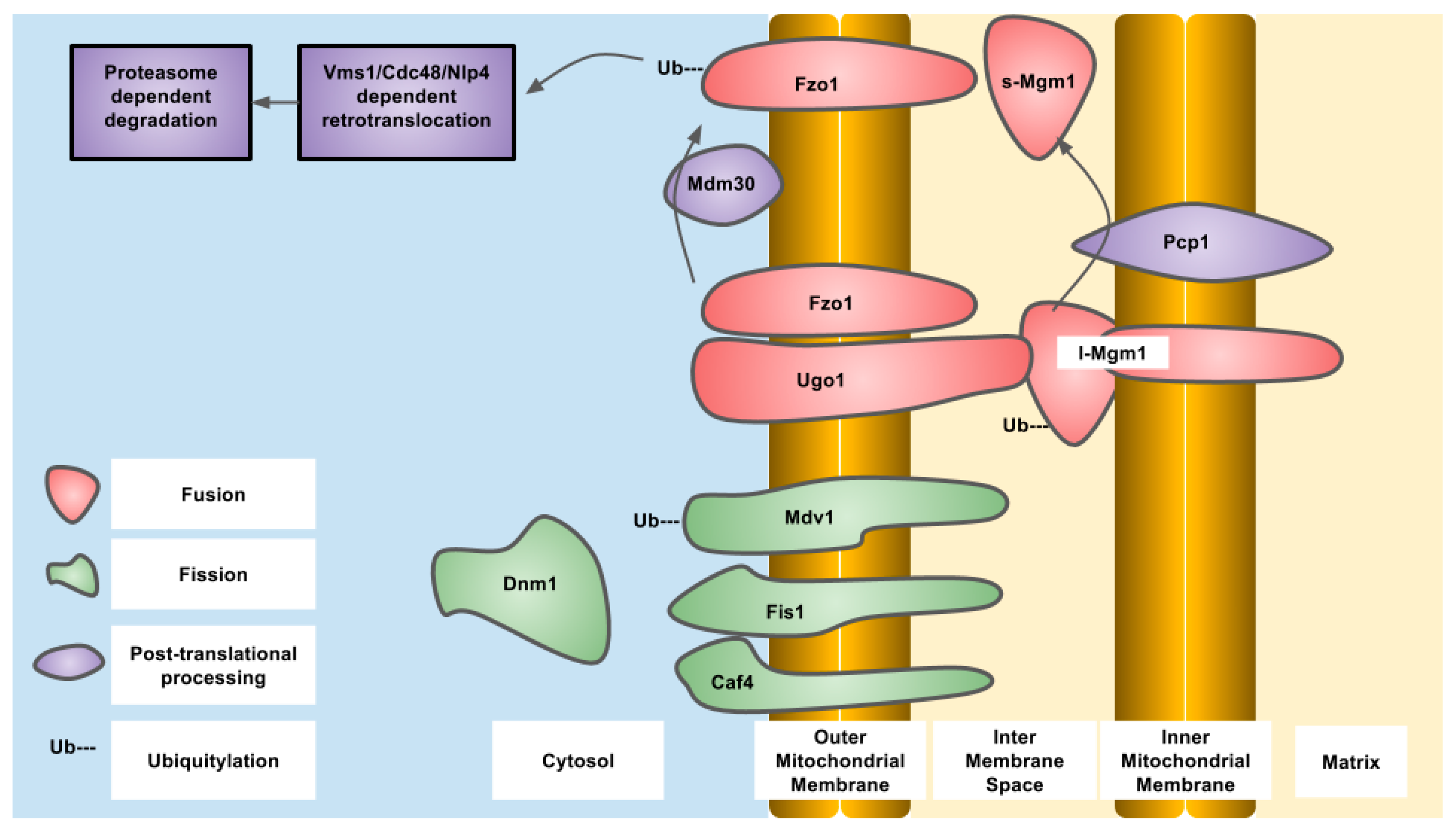