Insights into the Dichotomous Regulation of SOD2 in Cancer

Pelvic radiation for cancer therapy can damage a variety of normal tissues. In this study, we demonstrate that radiation causes acute changes to pelvic fibroblasts such as the transformation to myofibroblasts and the induction of senescence, which persist months after radiation. The addition of the manganese porphyrin, MnTE-2-PyP, resulted in protection of these acute changes in fibroblasts and this protection persisted months following radiation exposure. Specifically, at two months post-radiation, MnTE-2-PyP inhibited the number of α-smooth muscle actin positive fibroblasts induced by radiation and at six months post-radiation, MnTE-2-PyP significantly reduced collagen deposition (fibrosis) in the skin and bladder tissues of irradiated mice. Radiation also resulted in changes to T cells. At two months post-radiation, there was a reduction of Th1-producing splenocytes, which resulted in reduced Th1:Th2 ratios. MnTE-2-PyP maintained Th1:Th2 ratios similar to unirradiated mice. At six months post-radiation, increased T cells were observed in the adipose tissues. MnTE-2-PyP treatment inhibited this increase. Thus, MnTE-2-PyP treatment maintains normal fibroblast function and T cell immunity months after radiation exposure. We believe that one of the reasons MnTE-2-PyP is a potent radioprotector is due to its protection of multiple cell types from radiation damage.
Keywords: MnTE-2-PyP; fibrosis; radiation; fibroblast; T cells; adipose; skin; bladder; NQO1; COL3A1 MnTE-2-PyP; fibrosis; radiation; fibroblast; T cells; adipose; skin; bladder; NQO1; COL3A1

Six- to eight-week-old, male, C57BL/6 (Charles River Laboratories, Wilmington, MA, USA) mice were used for all experiments. Animals were housed five animals per cage in standard mouse cages in the animal facility at the University of Nebraska Medical Center (UNMC). Mice were exposed to a 12 h light/12 h dark cycle, fed and watered ad libitum. All experimental protocols were reviewed and approved by the UNMC Institutional Animal Care and Use Committee (14-054-08-FC).

Six- to eight-week-old, male, C57BL/6 mice were treated 24 h prior to radiation with an i.p. injection of phosphate buffered saline (PBS) or MnTE-2-PyP (10 mg/kg). The following day the mice were anesthetized with ketamine 100 mg/kg/xylazine 5 mg/kg and then placed under lead shielding so that only their lower abdomens were exposed to radiation, using an X-ray box irradiator (Rad Source RS-2000). X-rays were administered ~1 Gy/min. Mice were exposed to 7.5 Gy on five sequential days for a total of 37.5 Gy accumulative dose. During the week of radiation therapy and the week following radiation, the mice were administered either PBS or MnTE-2-PyP (5 mg/kg) three times a week. At two weeks post-radiation, animals were administered PBS or MnTE-2-PyP (10 mg/kg) weekly until the end of the experiment. Animals were sacrificed at two months and six months post-radiation.

Prostates were collected from C57BL/6 mice at 2 months post-radiation or in 6–8-week-old mice that were untreated. After mincing the prostates, they were digested in 5 mg/mL collagenase I (Thermo Fisher, Waltham, MA, USA, cat. 17100017) for 30 min at 37 °C [41]. Tissue fragments were then cultured for 2–3 weeks in Dulbecco’s Minimal Essential Media (DMEM), supplemented with 10% FBS, 1% penicillin/streptomycin and 1% non-essential amino acids with or without 30 μM MnTE-2-PyP (a gift from Dr. James Crapo, National Jewish Health, Denver, CO, USA). All the cells were fibroblasts after 5 days of culture. Purity of the cells was determined using ERTR7 (Abcam, cat. ab51824, Cambridge, MA, USA), a fibroblast marker and Keratin17 (Cell Signaling cat. 4543, Danvers, MA, USA), an epithelial cell marker. All experiments were repeated in triplicate using primary fibroblasts cells collected from prostates of different mice.

We have followed the same procedure for the collagen contraction assay, which we described previously [4,42]. Briefly, 4 × 105 primary human fibroblast cells were seeded in the presence of PBS or 30 µM of MnTE-2-PyP. The next day, cells were either sham irradiated or irradiated with 2–3 Gy of X-rays. After 48 h of incubation, cells were harvested and embedded in 2 mg/mL collagen discs on low-attachment 24-well plates. In some cases, 4 × 105 primary mouse fibroblasts isolated from 2 months after radiation exposure were seeded on collagen discs. After 8 h of incubation, the collagen discs were imaged and areas were measured using ImageJ (National Institutes of Health, Bethesda, MD, USA).

We have described the detailed procedure of senescence staining previously [4,42]. Briefly, 2 × 105 primary human fibroblast cells were seeded in the presence of PBS or 30 µM MnTE-2-PyP followed by either sham radiation or radiation with 3 Gy of X-rays. At 48 h post-radiation, cells were fixed and stained with senescence association beta-galactosidase (SA-β-Gal) staining solution followed by another 24-h incubation. In some cases, 4 × 105 primary mouse fibroblasts isolated from animals 2 months after radiation exposure and were cultured for three weeks and then stained with SA-β-Gal staining solution. Brightfield images were captured with an Olympus IX81 inverted microscope (Olympus America Inc., Melville, NY, USA) and inverted images were analyzed and counted by ImageJ.

Mouse tissues were harvested immediately following euthanasia, fixed for 48 h in 4% paraformaldehyde at 4 °C and then placed in 70% ethanol. The tissues were embedded in paraffin blocks and 5 µm (bladder and skin) or 7 µm (gonadal fat pad) thick tissue sections were cut and placed on glass slides. Some sections were stained with hematoxylin and eosin while others were left unstained.

Tissue sections were deparaffinized in xylenes and rehydrated in graded alcohols, then rinsed in running deionized water. Tissues were re-fixed in Bouin’s solution for 16 h at room temperature, then rinsed for 10 min in running tap water. Nuclei were stained for 10 min in Weigert’s iron hematoxylin and thoroughly rinsed in running warm tap water for 10 min. Muscle, cytoplasm and keratin were stained in Beibrich Scarlet-Acid Fuchsin (0.9–0.1%) for 5 min and rinsed before differentiating for 15 min in 2.5% phosphomolybdic-2.5% phosphotungstic acid. Finally, collagen was stained for 8 min in 2.5% Analine blue, rinsed and then differentiated for 1 min in 1% acetic acid. Sections were dehydrated using graded alcohols, cleared in xylenes and mounted with Permount (Fisher Scientific, cat. SP15, Hampton, NH, USA).

Trichrome stained sections were imaged in brightfield mode, with a 20× objective, on a Leica DM4000 B LED microscope (Leica Microsystems, Wetzler, Germany). Bladders were imaged using 4–5 fields of view to capture the entirety of the muscle area. Using ImageJ software, the muscle region of the image was selected and then thresholding was used to select only red pixels (muscle) or only blue pixels (collagen)—white hues were excluded to eliminate holes in the tissue. The percentage of tissue comprised of collagen was averaged for each animal and the mean per group reported. To measure the collagen density in the skin, each section was imaged over the length of the section requiring six evenly spaced fields of view. The region of interest (the dermis, excluding hair follicles and sweat glands) was selected so that only the area containing collagen was included in the analysis. The image was converted to binary based on analysis of the histogram. The collagen density was calculated as the number of pixels representing collagen divided by the total number of pixels in the region of interest (ROI).

The epidermal layer thickness was quantified using the trichrome staining images. For each image, 25 equally spaced measurements were made along the length of the tissue by drawing a line from the junction of the dermis and epidermis to the edge of the epithelial layer. The pixel value was converted to microns by using a factor of 4.06 pixels/µm. A mean epidermal thickness was calculated for each animal using all six images.

Adipocyte diameter was quantified using H&E stained tissue sections processed by the core Tissue Science Facility at University of Nebraska Medical Center. Four to six images were analyzed per animal and images were collected from regions of tissue that had not been disturbed (folded or torn) during the staining procedure. ImageJ software was used to process the images for segmentation. First, the image was converted to an 8-bit gray scale and then a rolling ball background subtraction was performed, followed by a median filter to remove noise from the image. The image was then converted to binary using a threshold of pixel values above 249. The resulting borders were over estimated by the high threshold and, thus, were enhanced with the “Dilate” function, which added pixels uniformly at the periphery of the adipocyte. The adipocyte borders were manually labeled with the wand selection tool and using a conversion factor of 4.06 pixels/µm, the areas were calculated and the mean/animal reported.

Tissue sections were deparaffinized in xylenes and rehydrated in graded alcohols, then rinsed in running deionized water. Antigen retrieval was performed by boiling slides in 10 mM sodium citrate buffer, pH 6.0 for 10 min, followed by a 30 min cool down and a 10 min PBS wash. Endogenous peroxidases were quenched for 5 min in 3% H2O2 in PBS, followed by a 5 min wash. Next, slides were blocked in 2% goat serum for 30 min followed immediately by a 2 h incubation in primary antibody. Primary antibodies included α-smooth muscle actin (1:100, Abcam, cat. ab5694) and CD3 (1:50, Abcam, cat. ab5690). Negative stain controls were incubated in blocking buffer without primary antibody for 2 h. Following several washes in PBS, the sections were next incubated in biotinylated goat anti-rabbit secondary antibody (1:200, Vector Labs, cat. BA-1000, Burlingame, CA, USA) then washed in PBS again. Peroxidase activity was associated to the biotinylated secondary antibody using the Vector Labs ABC Kit (cat. PK-4000) by incubation for 30 min in ABC buffer. Finally, DAB substrate was applied to detect the proteins of interest (Vector Labs, cat. SK-4100) for 5–7 min until the brown color was visible under a microscope. Slides were counterstained by briefly dipping in Harris hematoxylin (Sigma-Aldrich, cat. HHS16, St. Louis, MO, USA), then dehydrated through graded alcohols, cleared in xylenes and mounted with Permount solution.
For both α-smooth muscle actin in skin and CD3 in fat, six random fields of view were captured with a 20× objective, on a Leica DM4000 B LED microscope (Buffalo Grove, IL, USA). Cells staining a deep brown color were manually counted using the “multi-point” function in ImageJ software. The average cells per field were reported and used for statistical analysis.

All in vitro experiments were conducted independently three or more times. Statistical analyses were performed using GraphPad Prism 6 Software version 6.0.5 for windows. Data are expressed as the mean ± standard deviation (SD). For ex vivo and in vivo experiments, each group consisted of 5–10 animals. Data are reported as the mean ± standard error of the mean (SEM). The statistical significance between different groups was evaluated with 1-way analysis of variance (ANOVA) followed by post-hoc Tukey’s test for multiple comparisons and a p-value ≤ 0.05 was considered statistically significant. 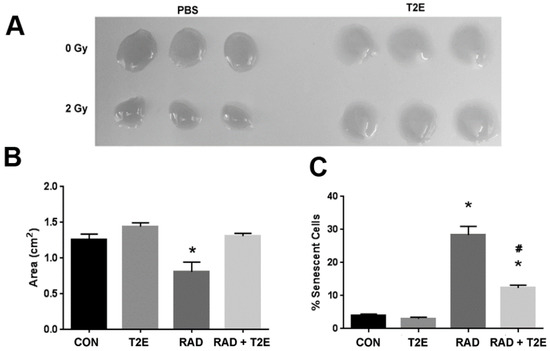 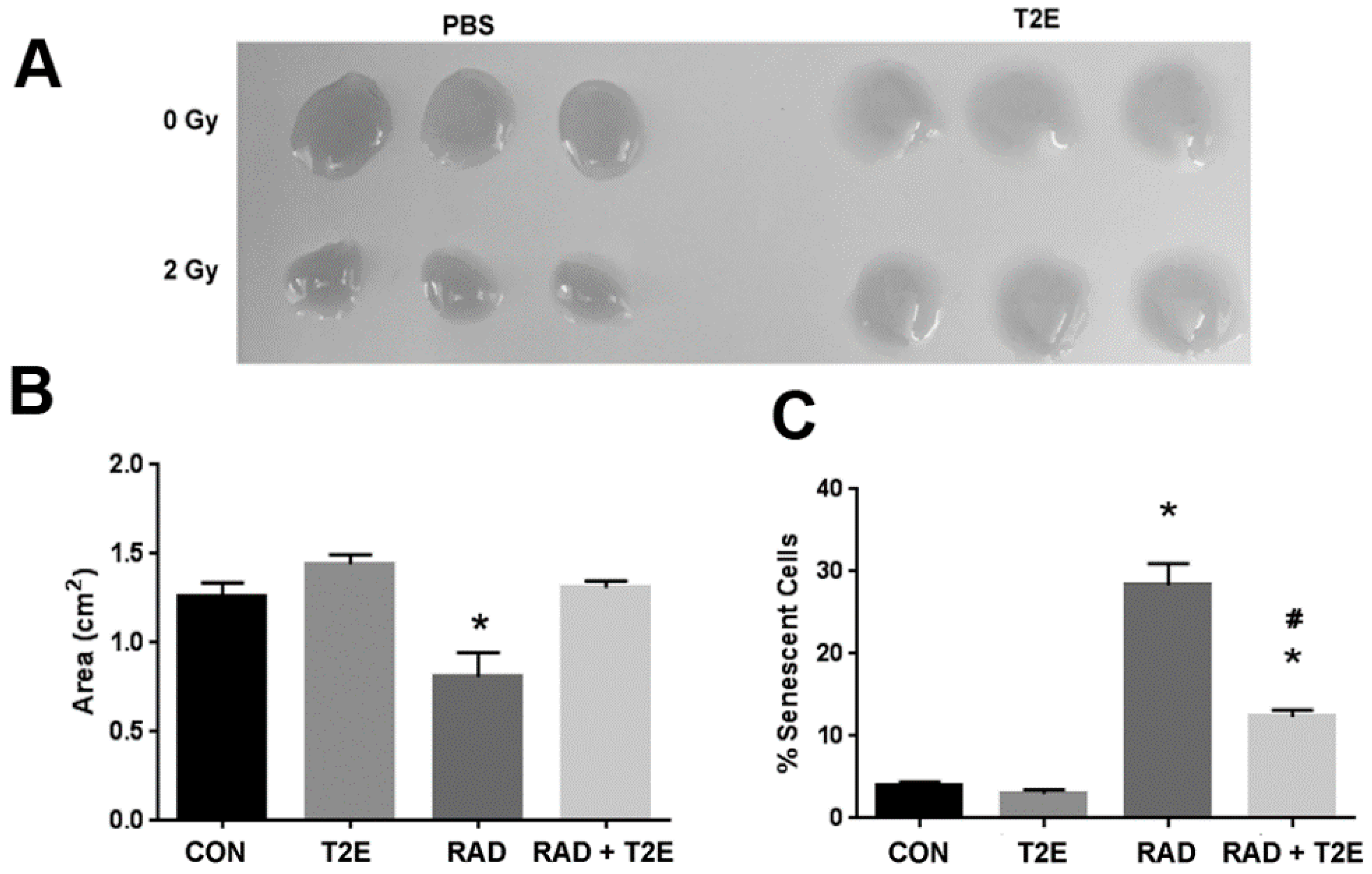 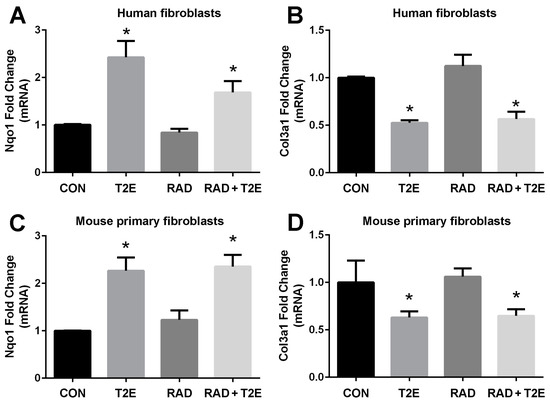 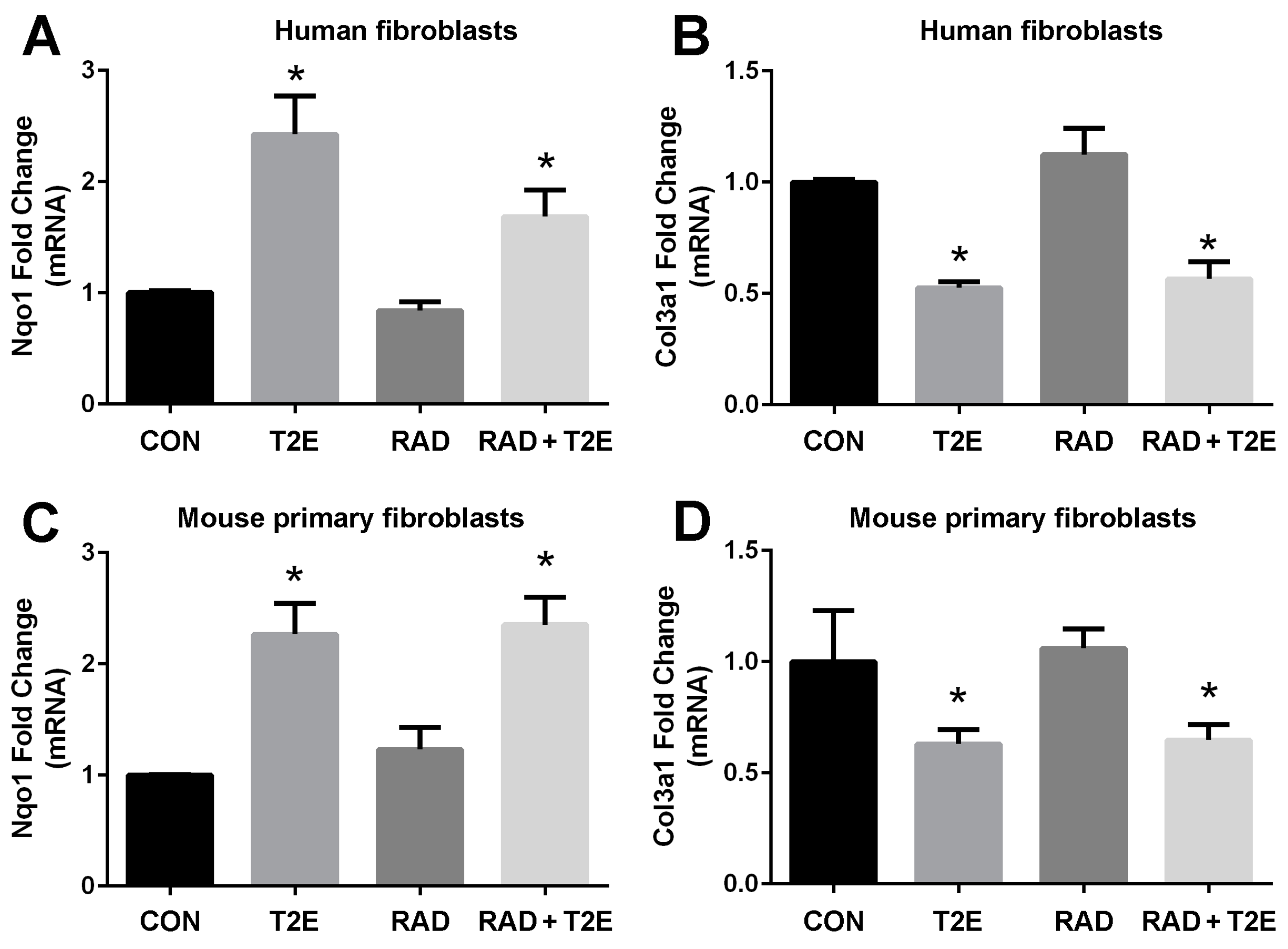 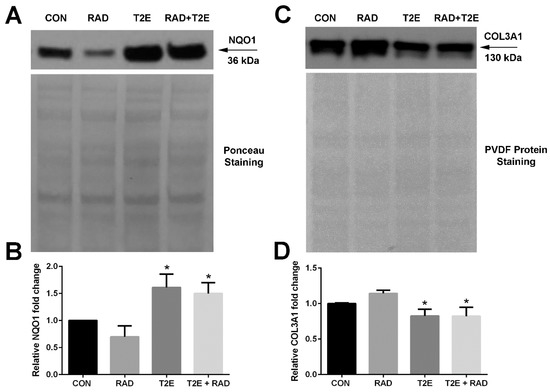 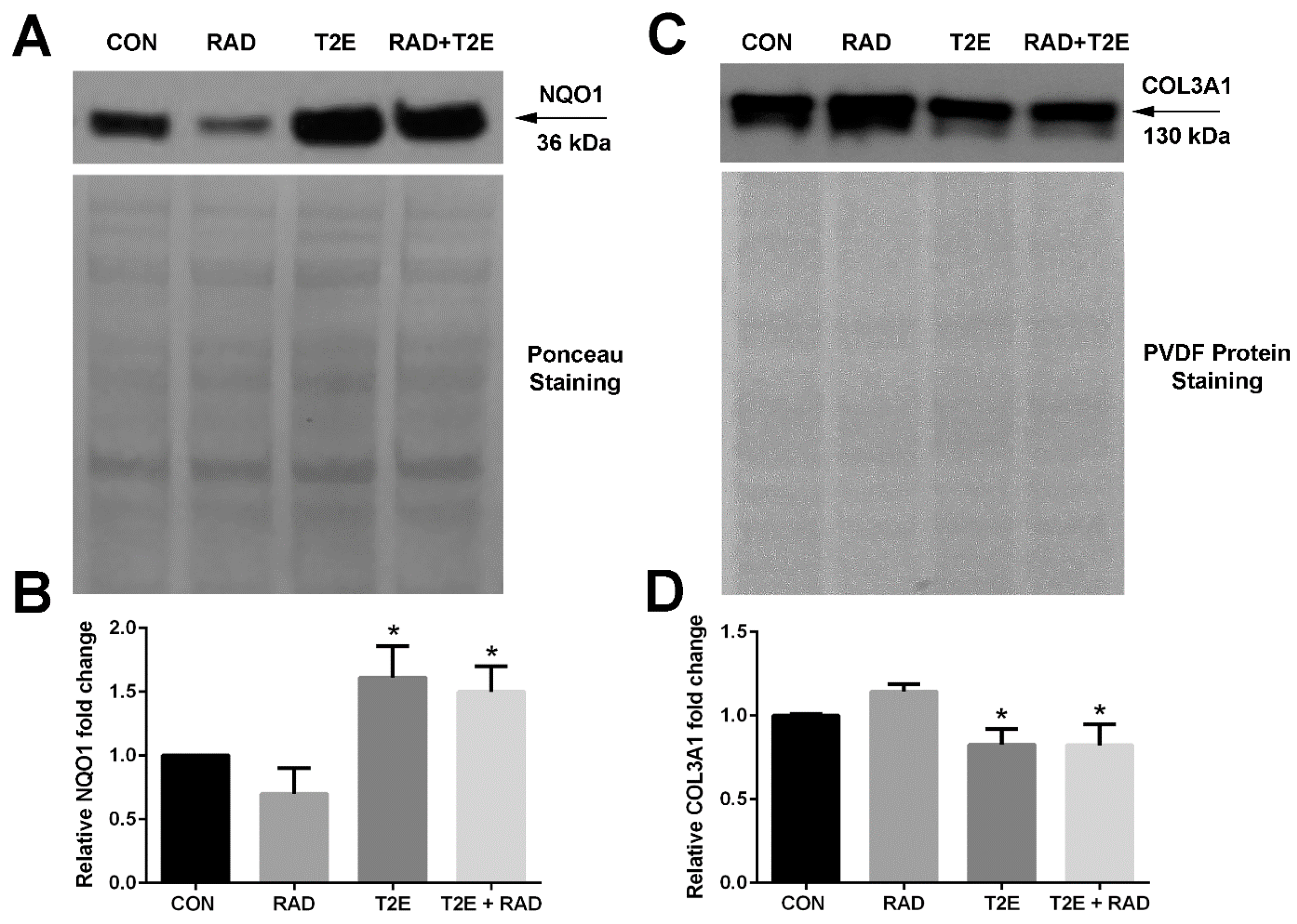 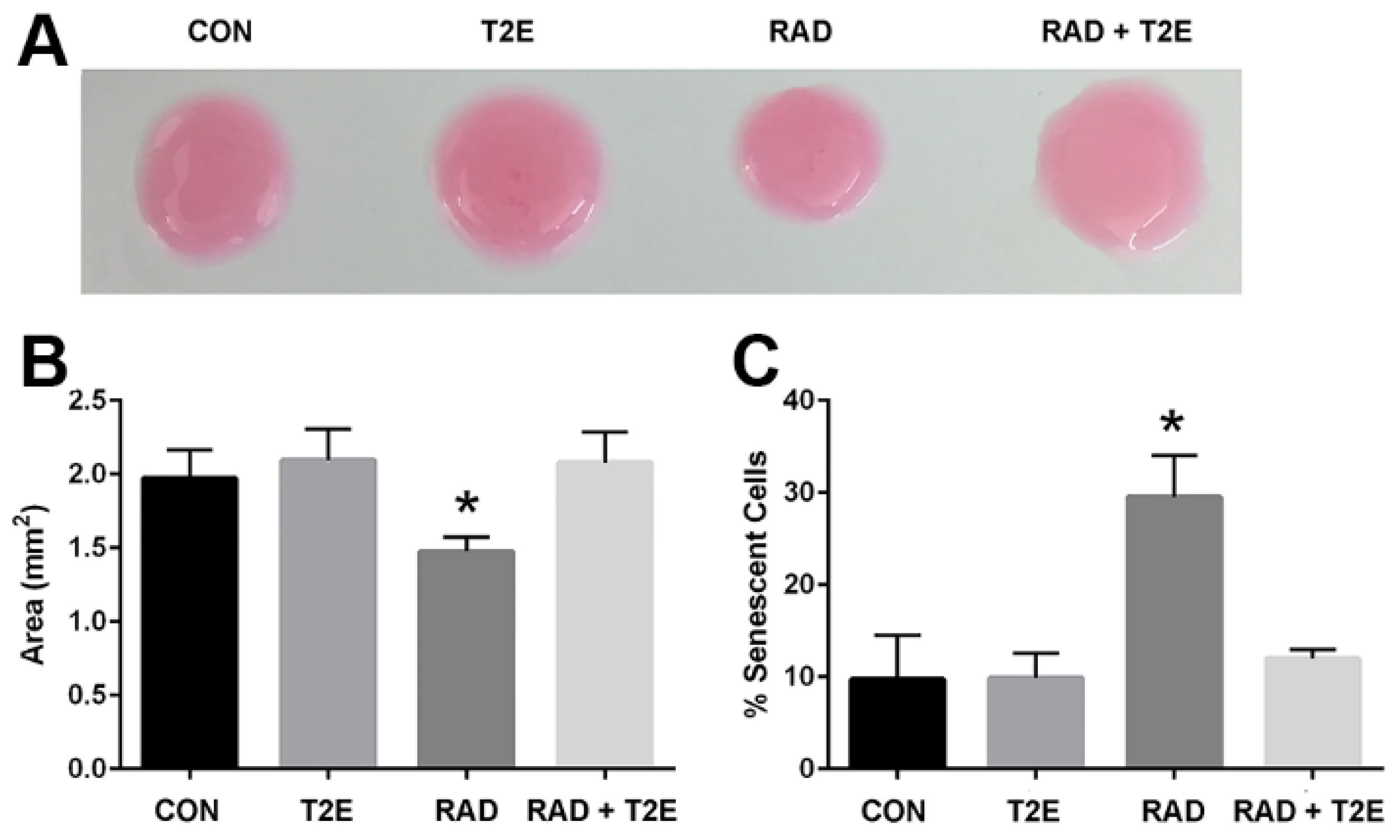 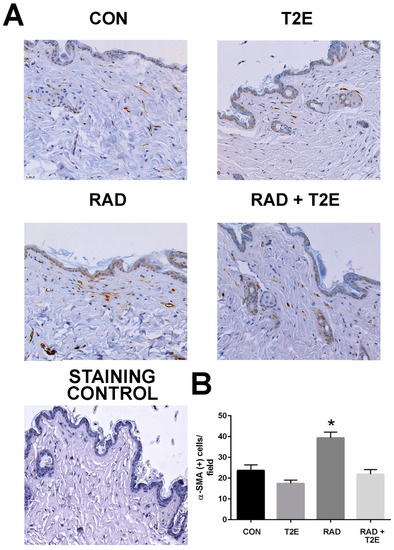 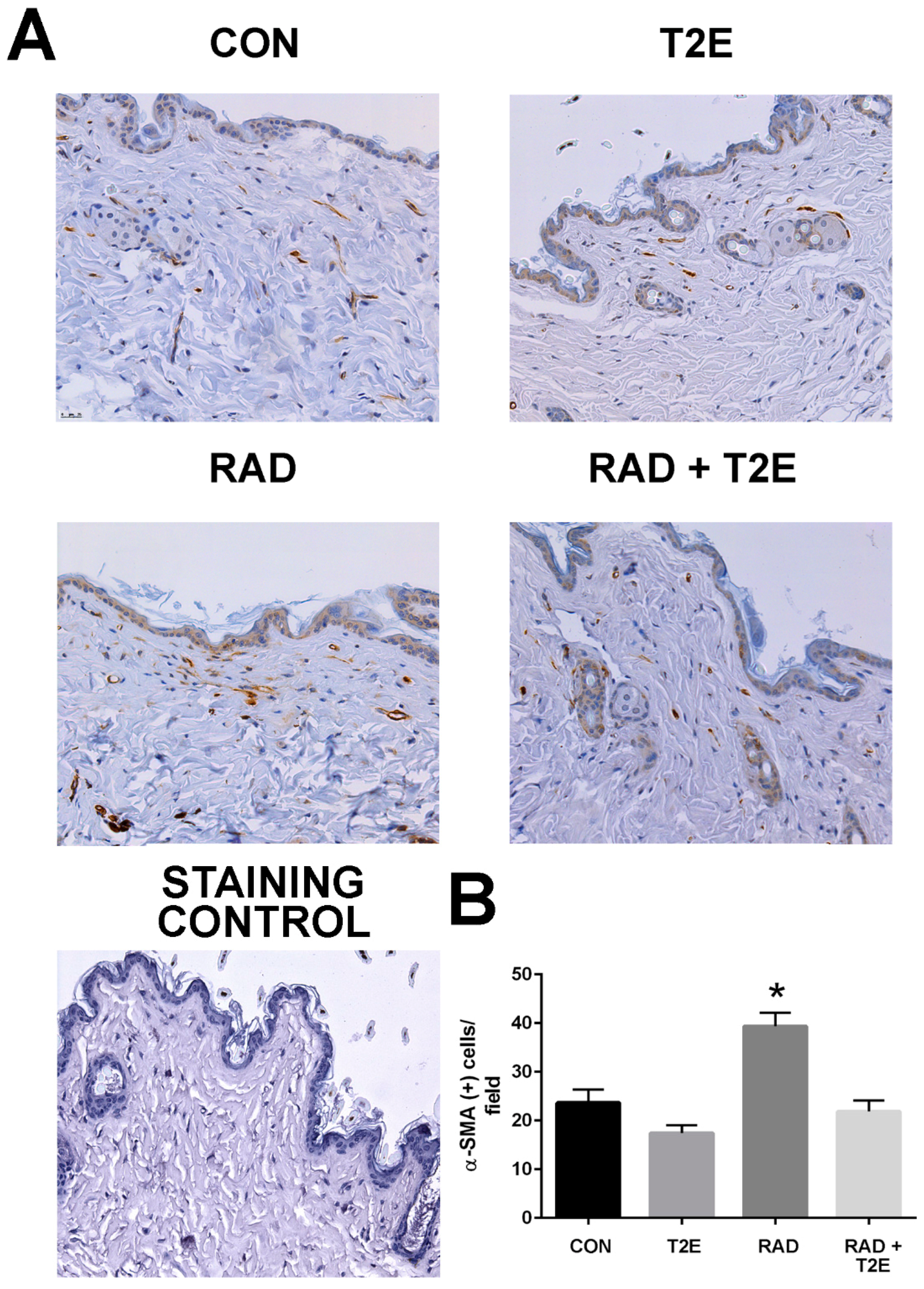 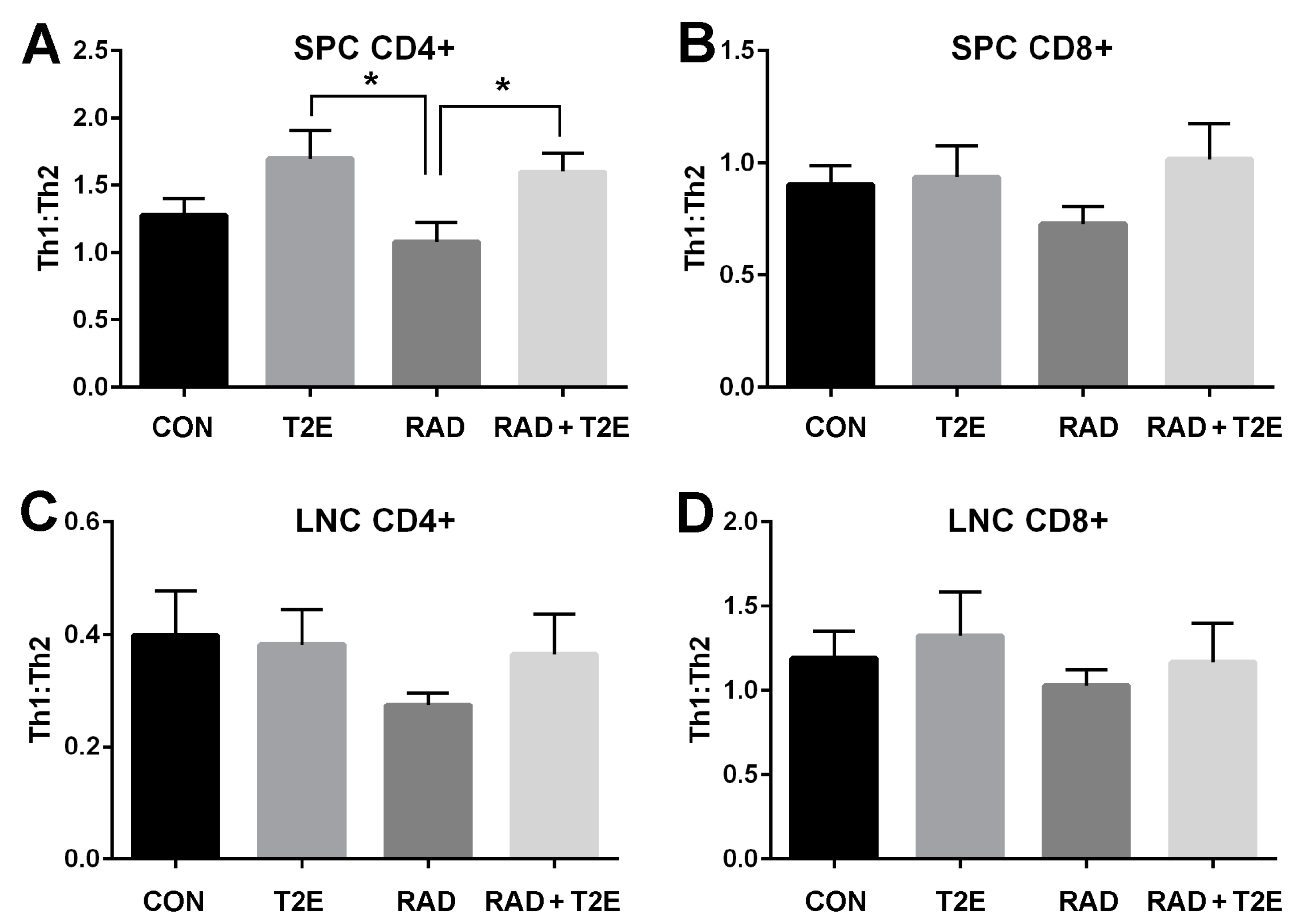 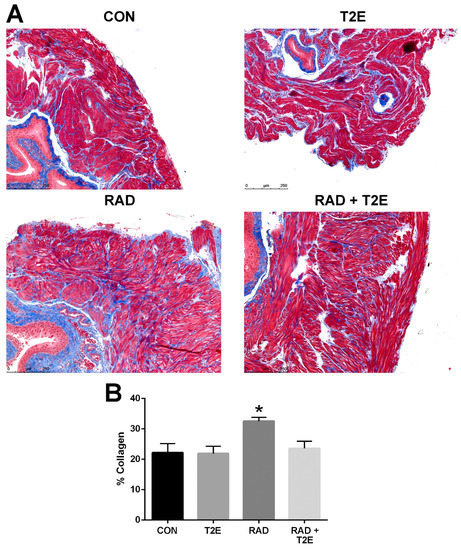 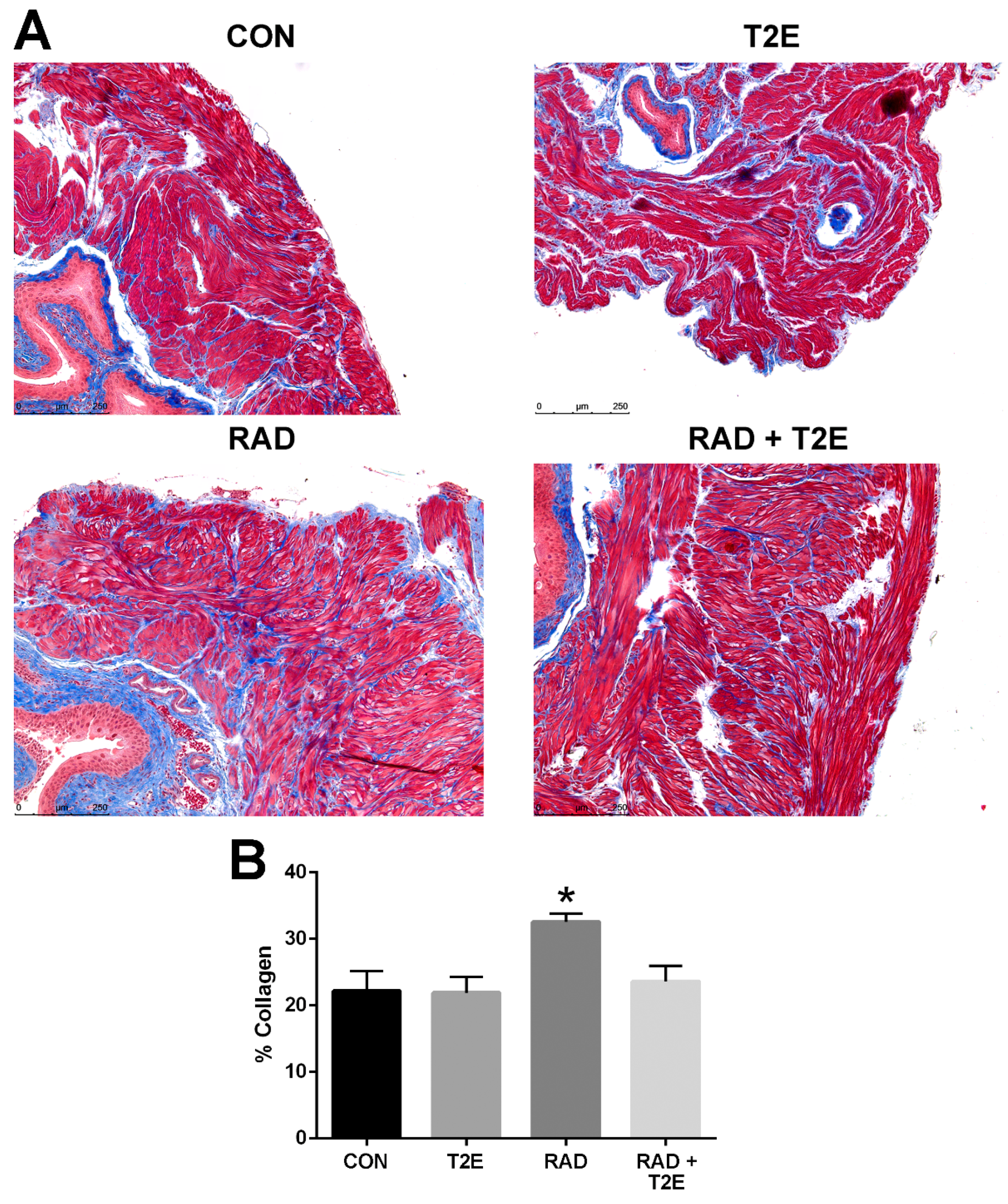 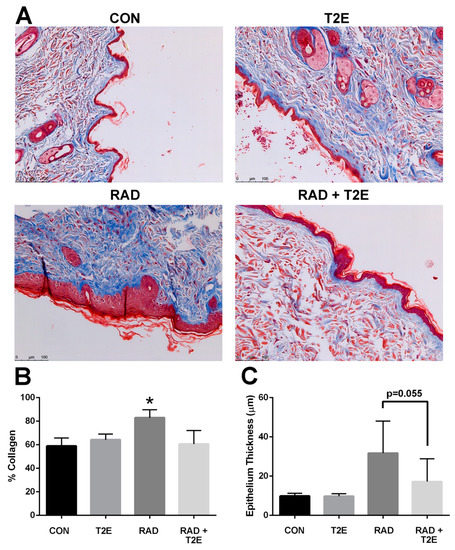 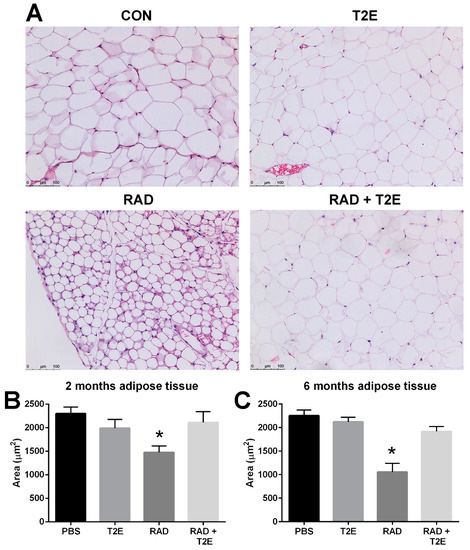 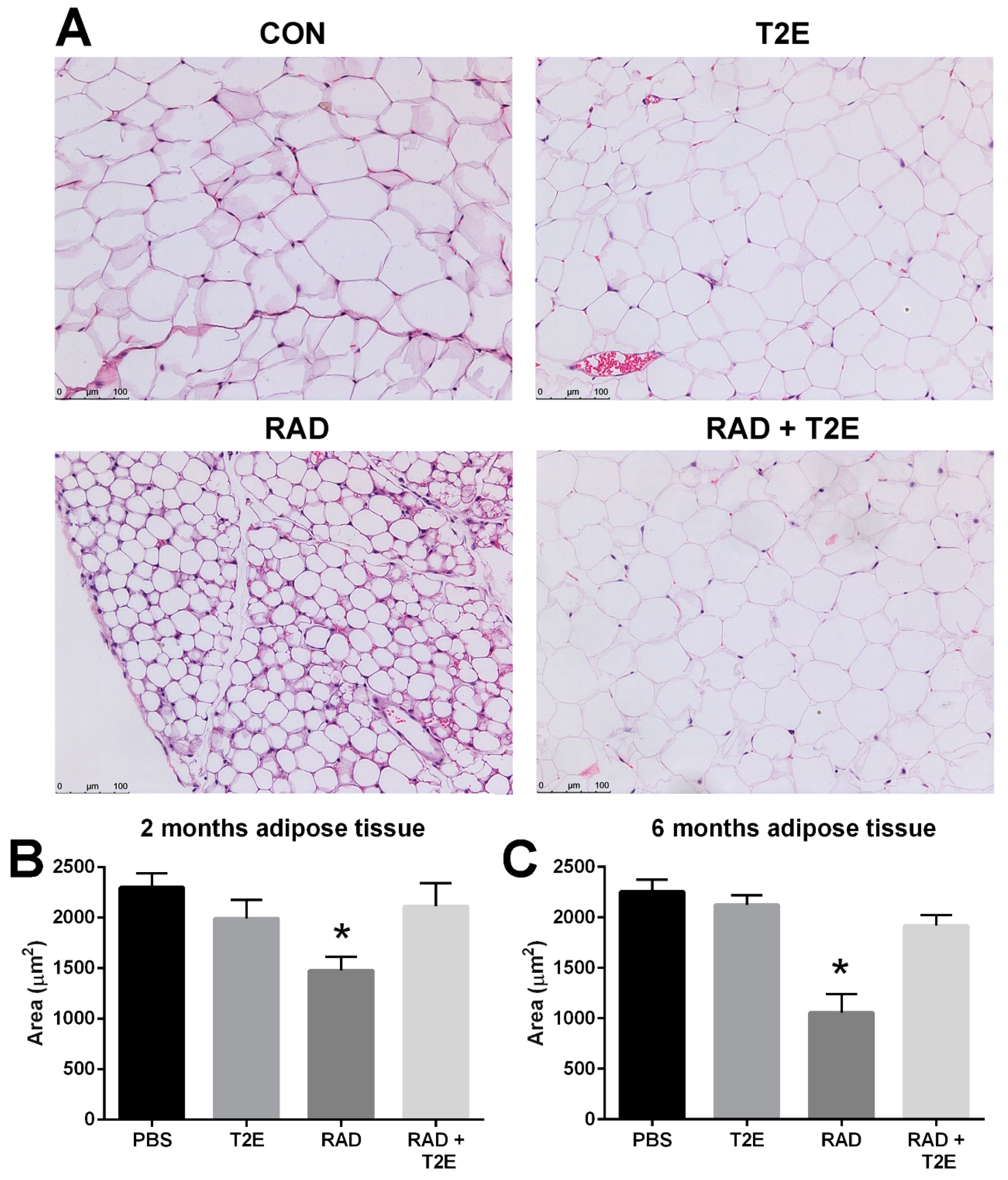 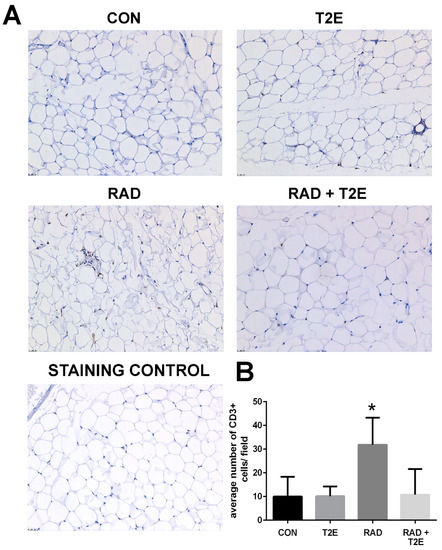