Breast cancer is one of the most common neoplasms worldwide, and in spite of clinical and pharmacological advances, it is still a clinical problem, causing morbidity and mortality. On the one hand, breast cancer shares with other neoplasms some molecular signatures such as an imbalanced redox state, cell cycle alterations, increased proliferation and an inflammatory status. On the other hand, breast cancer shows differential molecular subtypes that determine its prognosis and treatment. These are characterized mainly by hormone receptors especially estrogen receptors (ERs) and epidermal growth factor receptor 2 (HER2). Tumors with none of these receptors are classified as triple negative breast cancer (TNBC) and are associated with a worse prognosis. The success of treatments partially depends on their specificity and the adequate molecular classification of tumors. New advances in anticancer drug discovery using natural compounds have been made in the last few decades, and polyphenols have emerged as promising molecules. They may act on various molecular targets because of their promiscuous behavior, presenting several physiological effects, some of which confer antitumor activity. This review analyzes the accumulated evidence of the antitumor effects of plant polyphenols on breast cancer, with special attention to their activity on ERs and HER2 targets and also covering different aspects such as redox balance, uncontrolled proliferation and chronic inflammation. View Full-Text
Keywords: breast cancer; polyphenols; luminal; TNBC; redox balance; apoptosis; autophagy; inflammation; ER; HER2 breast cancer; polyphenols; luminal; TNBC; redox balance; apoptosis; autophagy; inflammation; ER; HER2
►▼ Show Figures 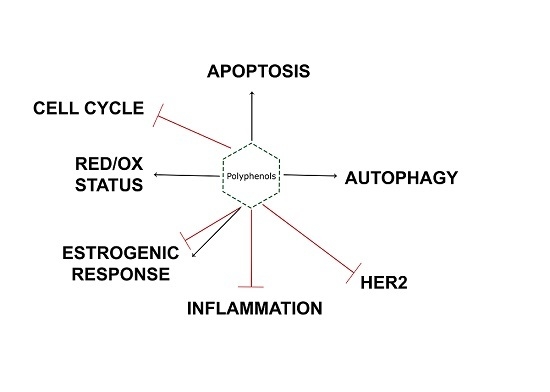