Oxidative stress is a metabolic dysfunction that favors the oxidation of biomolecules, contributing to the oxidative damage of cells and tissues. This consequently contributes to the development of several chronic diseases. In particular, zinc is one of the most relevant minerals to human health, because of its antioxidant properties. This review aims to provide updated information about the mechanisms involved in the protective role of zinc against oxidative stress. Zinc acts as a co-factor for important enzymes involved in the proper functioning of the antioxidant defense system. In addition, zinc protects cells against oxidative damage, acts in the stabilization of membranes and inhibits the enzyme nicotinamide adenine dinucleotide phosphate oxidase (NADPH-Oxidase). Zinc also induces the synthesis of metallothioneins, which are proteins effective in reducing hydroxyl radicals and sequestering reactive oxygen species (ROS) produced in stressful situations, such as in type 2 diabetes, obesity and cancer. Literature provides strong evidence for the role of zinc in the protection against oxidative stress in several diseases.
Keywords: zinc; oxidative stress; mechanisms zinc; oxidative stress; mechanisms

Oxidative stress is characterized by an imbalance between oxidants and antioxidants, due to the excessive production of reactive oxygen species (ROS) and the reduction in the rate of its removal by the antioxidant defense system. This metabolic disturbance favors the oxidation of biomolecules, contributing to the oxidative damage in the cells and tissues and consequently to the development of several chronic diseases such as obesity, diabetes and cancer [1,2,3].
Several studies have examined the role of minerals in the antioxidant defense system. In particular, zinc is one of the essential minerals for human health because it serves as a co-factor for over 300 enzymes and 2000 transcription factors. Zinc is an important mediator of cellular signaling [4,5]. It acts primarily to enhance insulin action. As an anti-inflammatory agent, zinc provides structural stability to cell membranes and it is also an important regulator of gene expression [6,7,8].
Zinc acts as a co-factor for important enzymes that contribute to the proper functioning of the antioxidant defense system. In addition, this mineral protects cells against oxidative damage because it acts in the stabilization of membranes, inhibits the enzyme nicotinamide adenine dinucleotide phosphate oxidase (NADPH-Oxidase), a pro-oxidant enzyme, and induces metallothionein synthesis. Metallothionein is involved in the reduction of hydroxyl radicals (OH) and in the sequestration of the reactive oxygen species produced under stress conditions [9,10].
Therefore, considering the complexity of oxidative stress and its detrimental effect on health in addition to the potent antioxidant properties of zinc, this review aims to provide the latest information on the mechanisms involved in the role of zinc in the protection against oxidative stress in chronic diseases.
This is a narrative review and a bibliographical survey of articles in the databases PubMed and Science Direct without limit for the year of publication, selected from August to September 2016. The keywords used in the search were "zinc”, “oxidative stress”, “zinc transporters”, and “antioxidant”. The descriptors were used alone or combined using the Boolean operators “AND” and “OR”.
Studies that presented relevant aspects of the mechanisms involved in the role of zinc in protection against oxidative stress were included. Dissertations, theses, articles in which only a summary was available, and those duplicated in different databases were excluded.
Then, we proceeded with the analysis of the included articles, and started reading the titles, followed by summaries, and later the full text. The application of the exclusion criteria was performed at all stages, always by consensus of the reviewers. At the end, we selected 63 articles.

Research has shown that zinc status may be altered under pathophysiological conditions, such as diseases characterized by elevated oxidative stress, which impairs the control of these diseases. In particular, obese individuals may present with a deficiency of zinc, which aggravates the oxidative stress present in this disease [48,49]. A study conducted by Habib et al. [50] in obese individuals found high concentrations of malondialdehyde, a biomarker of lipid peroxidation, when compared with the control group. Associated with this, research has shown that low levels of glutathione and the reduction of superoxide dismutase activity may be due to zinc deficiencies observed in the patients studied.
Chronic hyperglycemia in type 2 diabetes mellitus has been associated with lipid peroxidation and oxidative damage in cells, impairing the antioxidant defense in type 2 diabetes patients. Lima et al. [12] showed reduced zinc concentrations in the plasma of type 2 diabetes patients. This is probably due to an elevated loss of this mineral in urine, resulting from hyperglycemia and polyuria. In addition, the authors also demonstrated an enhanced response to oxidative stress related to the appropriate zinc status and high superoxide dismutase activity in type 2 diabetic patients, the activity of which was influenced by the serum concentrations of insulin.
Zinc deficiency also can be found in chronic kidney disease, which has been attributed to reduced food intake and intestinal absorption of the mineral, interaction with calcium and iron and increased loss of minerals during dialysis. In this disease, zinc binds to proteins modified by uremia, such as albumin, thus aggravating its deficiency [51,52]. A study conducted by Magalhães et al. [52] showed reduced concentrations of zinc in patients with chronic kidney disease, which was correlated with the reduction in the activity of the enzyme superoxide dismutase and impairment of the antioxidant defense.
In the study by Guo and Wang [53], supplementation with 11 mg of zinc per day was able to increase the plasma concentration of this mineral and reduce the concentration of copper in patients undergoing hemodialysis for chronic renal failure. Zinc supplementation also reduced the plasma concentration of the oxidative product, malondialdehyde, and increased the activity of superoxide dismutase compared to the control patients.
The regulation of extracellular zinc concentrations is also extremely important for maintaining homeostasis of the neural network, because this mineral plays a role in both the physiology and pathophysiology of the brain [54]. In synapses, the main pool of zinc occurs in the presynaptic vesicles, where the free zinc is co-released with glutamate during neural activity and acts to suppress NMDA receptors in the synaptic cleft [55]. The inhibition of NMDA receptors reduces the release of substance P by neuronal cells, protecting organisms against oxidative stress [56].
Moreover, antioxidants and anti-carcinogenic mechanisms associated with zinc homeostasis appear to play an inhibitory role in the growth of neoplastic cells. Zinc acts in the protection against genomic instability and genetic mutations. In this sense, the superoxide dismutase is an anticarcinogenic enzyme. It inhibits the initiation, promotion, and progression phases in mammary carcinogenesis [57].
Furthermore, dietary zinc deficiency has also been linked to an increased risk for breast cancer [10,58]. Oxidative stress due to a lack of zinc leads to changes in the tissue of mammary glands and increased macrophage infiltration in this region, resulting in a toxic microenvironment. These mechanisms lead to a hyperaccumulation of the mineral, which is associated with increased expression of the alpha estrogen receptor (ERα), ductal changes in organization, and increased fibrosis in the mammary gland [58].
It is noteworthy that the expression of metallothionein is deregulated in breast cancer, which is correlated with resistance to chemotherapy and poor prognosis. Metallothionein participates in carcinogenesis via mechanisms that promote the development of tumor cells resistant to chemotherapy and radiation. High levels of metallothionein in cancer cells protect against damage by inhibiting free radicals, apoptosis and promoting cell proliferation. Thus, these functions support uncontrolled growth of these cancer cells. Moreover, the interaction of metallothionein with zinc ions is involved in the regulation of several transcription factors that contribute to carcinogenesis [59].
In diseases, such as epilepsy, schizophrenia, and Alzheimer’s and Parkinson’s diseases, the deleterious effects of zinc can also be observed. In these conditions, zinc is released in excess by presynaptic neurons and astrocytes, resulting in neuronal death via the activation of microglia, NADPH oxidase and the production of ROS in neurons [60,61,62]. Moreover, zinc is also involved in the apoptosis of brain cells induced by hypoxia or ischemia [63]. This study observed that treatment of cells in vitro and in animals with a zinc chelator, named N,N,N′,N′-Tetrakis(2-pyridylmethyl)ethylenediamine (TPEN), attenuated neurological deficit, reduced the rate of neuronal apoptosis and the cerebral infarct area, increased superoxide dismutase activity and reduced plasma concentrations of malondialdehyde and interleukin-6 (IL-6). Thus, zinc appears to play a role in preventing apoptosis in this situation, mainly via oxidative stress and inflammation pathways.

Research has still not fully elucidated the role of zinc in the molecular mechanisms involved in the pathophysiology of chronic diseases, such as obesity, diabetes and cancer. However, data in the literature show that a deficiency in zinc favors the manifestation of oxidative stress, promoting the development of these diseases. It is necessary to clarify the biochemical and molecular basis involved in this process. Therefore, further studies on the subject may elucidate the role of this nutrient in protecting against oxidative stress present in these diseases. 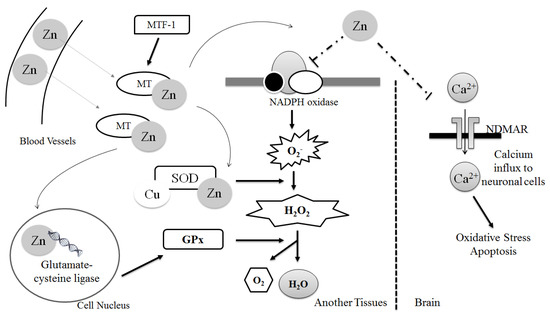