Pancreatitis, an inflammation of the pancreas, appears to be a main driver of pancreatic cancer when combined with Kras mutations. In this context, the exact redox mechanisms are not clearly elucidated. Herein, we treated mice expressing a KrasG12D mutation in pancreatic acinar cells with cerulein to induce acute pancreatitis. In the presence of KrasG12D, pancreatitis triggered significantly greater redox unbalance and oxidative damages compared to control mice expressing wild-type Kras alleles. Further analyses identified the disruption in glutathione metabolism as the main redox event occurring during pancreatitis. Compared to the wild-type background, KrasG12D-bearing mice showed a greater responsiveness to treatment with a thiol-containing compound, N-acetylcysteine (NAC). Notably, NAC treatment increased the pancreatic glutathione pool, reduced systemic markers related to pancreatic and liver damages, limited the extent of pancreatic edema and fibrosis as well as reduced systemic and pancreatic oxidative damages. The protective effects of NAC were, at least, partly due to a decrease in the production of tumor necrosis factor-α (TNF-α) by acinar cells, which was concomitant with the inhibition of NF-κB(p65) nuclear translocation. Our data provide a rationale to use thiol-containing compounds as an adjuvant therapy to alleviate the severity of inflammation during pancreatitis and pancreatic tumorigenesis. View Full-Text
Keywords: antioxidants; cancer; edema; inflammation; pancreas antioxidants; cancer; edema; inflammation; pancreas
►▼ Show Figures 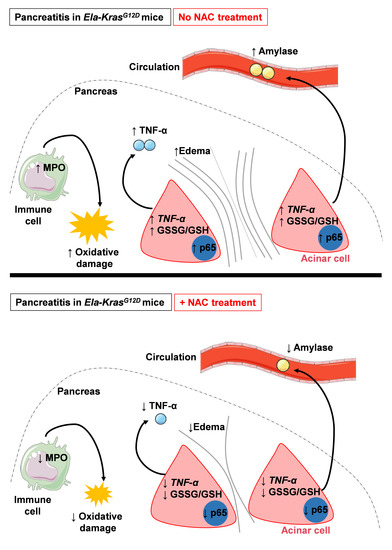