Antioxidant Effects of Schisandra chinensis Fruits and Their Active Constituents

Schisandra chinensis Turcz. (Baill.) belongs to the Schisandraceae family. The plants are native to northeastern China, Japan, Korea, Manchuria, and the Far East part of Russia. Their purple-red berries are called five-flavor fruits because of the sweet, bitter, pungent, salty, and sour taste [1,2,3,4,5]. S. chinensis is widely used as an herbal supplement in traditional Chinese medicine and in Western phytotherapy [1,2,4,5], whereas in Russia—as a potent adaptogen, improving disease and stress tolerance, and increasing energy, endurance, and physical performance [2,3].
S. chinensis is used as a preservative and an additive in food technology to enhance the flavor, taste, and nutritional value to the food [2]. The dried fruits of the S. chinensis and their extracts are helpful in the treatment of neurological, cardiovascular, and gastrointestinal disorders, in decreasing fatigue, reducing obesity, and protecting from mitochondrial dysfunction, insomnia, and the excessive sweating [1,2,5]. They stimulate immunity, act as a tonic, and exert antioxidant, anti-inflammatory, antiviral, anticancer, anti-aging, anti-diabetic, and liver- and skin-protecting activities [1,2,3,4,5].

S. chinensis fruits contain about 1.5% sugars (polysaccharides and monosaccharides; glucose, fructose, galactose, and arabinose), tannins (hydrolysable, e.g., gallic acid esters, and condensed, e.g., proanthocyanidins and catechol-type tannins), color substances (mainly anthocyanins), and about 3% essential oils, with sesquiterpenes as the dominant compounds [6]. α-Bergamotene, β-chamigrene, β-himachalene, and ylangene are the main components of essential oils (about 75%), whereas oxygenated sesquiterpenes, monoterpenes, and oxygenated monoterpenes comprise the smaller part (about 5%) [6]. Chemical investigations also revealed the presence of triterpenoids (lanostane and cycloartane-type triterpenoids and nortiterpenoids), organic acids (citric, fumaric, malic, and tartaric acids), phenolic acids (chlorogenic, gentisic, p-hydroxybenzoic, p-coumaric, protocatechuic, syringic, and salicylic acids) [7,8], flavonoids (quercetin, isoquercitrin, rutin, and hyperoside) [8], vitamins C and E, phytosterols, and bioelements (Cr, Cu, Co, Ca, Mg, Fe, Zn, Mn, B, Ni,) [1,7,9].
The major active compounds of S. chinensis (Figure 1) are dibenzocyclooctadiene lignans [1]. Schisandrin is the most dominant S. chinensis lignan found in the amounts of 2.2–5.3 mg/g in S. chinensis fruit [2,10].
Anticancer activity of S. chinensis lignans is decreased in the presence of a hydroxyl group at the C7 position, thus resulting in increased hydrophilicity and decreased permeability into the lipid bilayer [11], whereas a methylenedioxy group between C12 and C13 enhanced anticancer activity. A 1,2,3-trimethoxy moiety, a 6-acyloxy group, and the absence of a 7-hydroxy group resulted in P-glycoprotein inhibition and also increased S. chinensis anticancer efficacy [12]. Gomisin N and deoxyschisandrin were the most effective anticancer lignans of S. chinensis [11,12]. S. chinensis lignans without an ester group at C6, a hydroxyl group at C7, or a methylene dioxy moiety, and with an R-biphenyl configuration possess strong antiplatelet activity, with 6,7-dehydroschisandrol A as the most active compound [13]. The exocyclic methylene group in S. chinensis lignan structure is necessary for the antioxidant activity, which is enhanced even more in the presence of the benzoyloxy group [14].

3. Bioavailability of Schisandra chinensis Fruit Extract and Its Constituents

5. Antioxidant Activity of Schisandra chinensis Fruit Extract and Its Constituents

Impaired balance in pro-oxidant and antioxidant homeostasis causes oxidative stress, which enhances the production of toxic reactive oxygen species (ROS). ROS in the cells are mainly generated in mitochondria as by-products of the mitochondrial respiratory chain, whereas some of them can be derived also from redox metal ion-related and enzymatic sources [34,35]. ROS are neutralized by enzymatic and non-enzymatic endogenous antioxidant defense systems. Superoxide dismutase (SOD), catalase (CAT), glutathione peroxidase (GPx), and glutathione reductase (GR) belong to the enzymatic defense system, while small antioxidant molecules, such as vitamin C, vitamin E, and reduced glutathione (GSH), make part of non-enzymatic defense [34].
As with many plant-derived antioxidants, S. chinensis active compounds can directly scavenge reactive oxygen species, activate the antioxidant defense system under normal conditions, and act as pro-oxidants under pathological conditions (Figure 3).
Regarding S. chinensis polyphenolic compounds: Flavonoids, phenolic acids, and the major constituents of dibenzocyclooctadiene lignans are considered to be responsible for the antioxidant activities of S. chinensis fruit extract [2,4].

5.3. Effects of Schisandra chinensis Fruit Extract and Its Constituents on the Pro-Oxidant Enzymes

6. Effects of Schisandra chinensis Fruit Extract and Its Constituents on Mitochondria

The authors wish to thank the Pharmaceutical and Health Technology Open Access Center for support of this study. 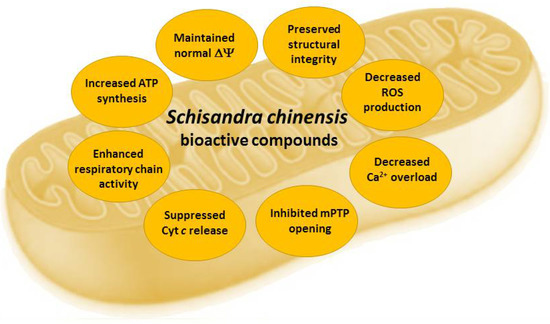