Brain–computer interfaces (BCIs), operated in a cue-based (offline) or self-paced (online) mode, can be used for inducing cortical plasticity for stroke rehabilitation by the pairing of movement-related brain activity with peripheral electrical stimulation. The aim of this study was to compare the difference in cortical plasticity induced by the two BCI modes. Fifteen healthy participants participated in two experimental sessions: cue-based BCI and self-paced BCI. In both sessions, imagined dorsiflexions were extracted from continuous electroencephalogram (EEG) and paired 50 times with the electrical stimulation of the common peroneal nerve. Before, immediately after, and 30 min after each intervention, the cortical excitability was measured through the motor-evoked potentials (MEPs) of tibialis anterior elicited through transcranial magnetic stimulation. Linear mixed regression models showed that the MEP amplitudes increased significantly (p < 0.05) from pre- to post- and 30-min post-intervention in terms of both the absolute and relative units, regardless of the intervention type. Compared to pre-interventions, the absolute MEP size increased by 79% in post- and 68% in 30-min post-intervention in the self-paced mode (with a true positive rate of ~75%), and by 37% in post- and 55% in 30-min post-intervention in the cue-based mode. The two modes were significantly different (p = 0.03) at post-intervention (relative units) but were similar at both post timepoints (absolute units). These findings suggest that immediate changes in cortical excitability may have implications for stroke rehabilitation, where it could be used as a priming protocol in conjunction with another intervention; however, the findings need to be validated in studies involving stroke patients. View Full-Text
Keywords: movement-related cortical potentials; EEG; brain–computer interface; neural plasticity; cortical excitability movement-related cortical potentials; EEG; brain–computer interface; neural plasticity; cortical excitability
►▼ Show Figures 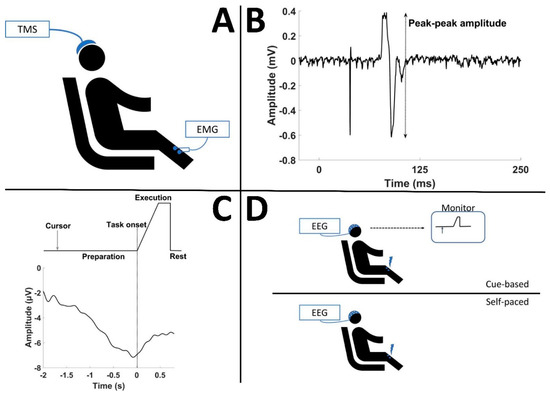