How Attention to Faces and Objects Changes Over Time in Toddlers with Autism Spectrum Disorders: Preliminary Evidence from An Eye Tracking Study

Background: Several studies have tried to investigate the role of inflammatory biomarkers in Autism Spectrum Disorder (ASD), and their correlations with clinical phenotypes. Despite the growing research in this topic, existing data are mostly contradictory. Methods: Eighty-five ASD preschoolers were assessed for developmental level, adaptive functioning, gastrointestinal (GI), socio-communicative and psychopathological symptoms. Plasma levels of leptin, resistin, plasminogen activator inhibitor-1 (PAI-1), macrophage chemoattractant protein-1 (CCL2), tumor necrosis factor-alfa (TNF-α), and interleukin-6 (IL-6) were correlated with clinical scores and were compared among different ASD subgroups according to the presence or absence of: (i) GI symptoms, (ii) regressive onset of autism. Results: Proinflammatory cytokines (TNF-α, IL-6 and CCL2) were lower than those reported in previous studies in children with systemic inflammatory conditions. GI symptoms were not correlated with levels of inflammatory biomarkers except for resistin that was lower in ASD-GI children (p = 0.032). Resistin and PAI-1 levels were significantly higher in the group with “regression plus a developmental delay” onset (Reg+DD group) compared to groups without regression or with regression without a developmental delay (p < 0.01 for all). Conclusions: Our results did not highlight the presence of any systemic inflammatory state in ASD subjects neither disentangling children with/without GI symptoms. The Reg + DD group significantly differed from others in some plasmatic values, but these differences failed to discriminate the subgroups as possible distinct ASD endo-phenotypes. View Full-Text
Keywords: autism spectrum disorder; regression; cytokines; PAI-1; neuroinflammation; gastrointestinal autism spectrum disorder; regression; cytokines; PAI-1; neuroinflammation; gastrointestinal
►▼ Show Figures 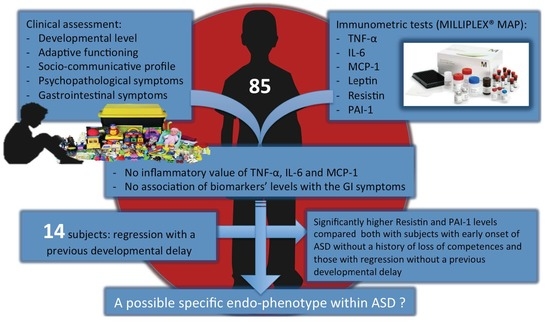