Brain computer interfaces (BCIs) enables people with motor impairments to communicate using their brain signals by selecting letters and words from a screen. However, these spellers do not work for people in a complete locked-in state (CLIS). For these patients, a near infrared spectroscopy-based BCI has been developed, allowing them to reply to “yes”/”no” questions with a classification accuracy of 70%. Because of the non-optimal accuracy, a usual character-based speller for selecting letters or words cannot be used. In this paper, a novel spelling interface based on the popular 20-questions-game has been presented, which will allow patients to communicate using only “yes”/”no” answers, even in the presence of poor classification accuracy. The communication system is based on an artificial neural network (ANN) that estimates a statement thought by the patient asking less than 20 questions. The ANN has been tested in a web-based version with healthy participants and in offline simulations. Both results indicate that the proposed system can estimate a patient’s imagined sentence with an accuracy that varies from 40%, in the case of a “yes”/”no” classification accuracy of 70%, and up to 100% in the best case. These results show that the proposed spelling interface could allow patients in CLIS to express their own thoughts, instead of only answer to “yes”/”no” questions. View Full-Text
Keywords: brain computer interface; complete locked-in state; communication; Artificial Neural Network; 20-questions-game brain computer interface; complete locked-in state; communication; Artificial Neural Network; 20-questions-game
►▼ Show Figures 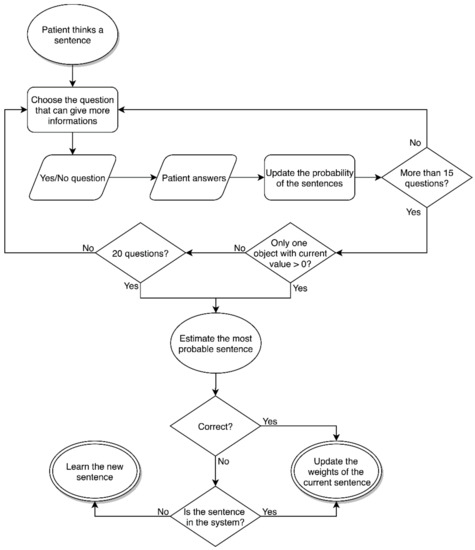