The Internet has played a major role in the distribution of New Psychoactive Substances (NPS), and crypto markets are increasingly used for the anonymous sale of drugs, including NPS. This study explores the availability of individual NPS and vendors on the crypto markets and considers whether crypto markets are a reliable platform for the sale of NPS. Data was collected from 22 crypto markets that were accessed through the hidden web using the Onion Router (Tor). Data collection took place bimonthly from October 2015 to October 2016 as part of the CASSANDRA (Computer Assisted Solutions for Studying the Availability aNd DistRibution of novel psychoActive substances) project. In seven snapshots over 12 months, 808 unique vendors were found selling 256 unique NPS. The total number of individual NPS and vendors increased across the data collection period (increase of 93.6% and 71.6%, respectively). Only 24% (n = 61) of the total number of NPS and 4% (n = 31) of vendors appeared in every snapshot over the 12 months, whereas 21% (n = 54) of NPS and 45% (n = 365) of vendors only appeared once throughout the data collection. The individual NPS and vendors did not remain the same over the 12 months. However, the availability of NPS and vendors selling NPS grew. NPS consistently available on crypto markets could indicate popular substances. View Full-Text
Keywords: new psychoactive substances; legal highs; darknet; hidden web; crypto market new psychoactive substances; legal highs; darknet; hidden web; crypto market
►▼ Show Figures 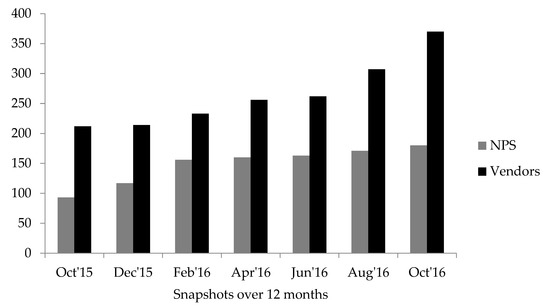