Epilepsy: A Call for Help
Previous Article in Special Issue

Review
The Emerging Role of Tractography in Deep Brain Stimulation: Basic Principles and Current Applications
by

:
Diffusion tensor imaging (DTI) is an MRI-based technique that delineates white matter tracts in the brain by tracking the diffusion of water in neural tissue. This methodology, known as “tractography”, has been extensively applied in clinical neuroscience to explore nervous system architecture and diseases. More recently, tractography has been used to assist with neurosurgical targeting in functional neurosurgery. This review provides an overview of DTI principles, and discusses current applications of tractography for improving and helping develop novel deep brain stimulation (DBS) targets.
Keywords:
diffusion tensor imaging; tractography; deep brain stimulation; tremor; depression

Deep brain stimulation (DBS) has been successfully used to treat different neuropsychiatric disorders. As one of its mechanisms is to modulate circuit activity and fibre pathways in the vicinity of the electrodes [1,2], the use of tractography during targeting has been advocated in some applications of this technique. Despite the more frequent use of tractography, many neurosurgeons, neurologists and psychiatrists still do not have a good understanding of its potential use during DBS targeting.
In this article, we provide a basic review of the principles behind diffusion tensor imaging and tractography and describe some of the most common clinical applications of tractography-based DBS targeting, namely tremor and depression.

The general notion that tractography may help to increase accuracy when treating patients. Mapping tracts that may be important for the efficacy and side effects of DBS has been recently explored in a number of applications. In addition to major tracts, fibre bundles that cannot be viewed with traditional magnetic resonance imaging, such as the dentato-rubro-thalamic tract (DRT), can be identified as optimal DBS targets. In this section we will consider two conditions for which tractography has been proposed to improve clinical outcomes—tremor and treatment refractory depression (TRD).

Essential tremor is the most prevalent movement disorder in adults. It presents as a bilateral postural or kinetic tremor that can severely diminish quality of life. DBS is a safe modality for the treatment of refractory essential tremor (ET) and other forms of tremors. Neurosurgeons have found success stereotactically implanting DBS leads in the ventral intermediate nucleus (Vim) of the thalamus [27,28] and adjacent regions, such as the posterior subthalamic area (PSA) [29,30,31,32].
The DRT is a compact fibre bundle that plays an important role in the coordination of somatomotor function [33]. The tract mainly originates in the dentate cerebellar nucleus, ascends through the upper pons, decussates, and travels through the red nucleus prior to innervating the ventralis oralis posterior nucleus and the Vim [33]. Bearing in mind the proximity of the DBS electrodes to the DRT in patients successfully treated for tremor [34], tractography data has led to the hypothesis that modulation of this tract could be important for the effects of stimulation (Figure 3) [33]. This possibility has been tested in open label clinical trials using tractography for targeting [33,35] and in a series of patients considered as being non-responders who benefited from DBS when electrodes were re-implanted near the DRT [36]. At present, a double-blind randomized clinical trial comparing the efficacy of traditional Vim and DRT DBS is under way [37].
In the last few years, tractography and DTI studies have also been conducted in patients with Parkinson’s disease treated or referred for DBS. One of the postulated mechanisms for the effects of subthalamic (STN) stimulation is the modulation of the hyperdirect pathway between the nucleus and cortical regions [38]. A recent study compared tractography-defined hyperdirect pathways using a tensor-based deterministic approach and an advanced probabilistic method based on constrained spherical deconvolution [39]. Though both identified connections between the ipsilateral motor cortex and the STN, a > 1.4 mm difference was found between methods when the target centre of mass was considered. While probabilistic tractography was associated with fairly continuous reconstructed connections terminating in the dorsolateral STN, these were sparser and presented variable subsets when the tensor-based method was used [39].
Connectivity patterns between cortical and STN cluster regions associated with improvement in clinical symptoms were also studied with high angular resolution diffusion and probabilistic tractography [40]. Good tremor improvement was associated with cortical connectivity between the primary motor cortex and an STN cluster corresponding to the posterior, superior and lateral portion of the nucleus. Improvement in bradykinesia corresponded to clusters near the superior STN border in a medial-posterior location with connectivity being observed with the supplementary motor area [40]. The rigidity cluster extended from the region described for bradykinesia to the STN-zona incerta border. Predictive connectivity was observed with the prefrontal cortex [40]. In a different study, clinical response correlated with connectivity between the DBS electrode and a network of brain regions, including structural connectivity to supplementary motor areas and functional anti-correlation to the primary motor cortex [41]. These results suggest that connectivity may become an important tool for DBS targeting in the future. In addition to the STN, tractography has also been used to define fibre pathways near the pedunculopontine nucleus [42,43]. To date, however, no study has used this modality to actually target regional structures.

The success and safety of DBS in ameliorating movement disorders has led to its investigation as a putative treatment for psychiatric conditions, including treatment of refractory depression. Initial open label clinical trials in which DBS was delivered to targets such as the subgenual cingulate gyrus (SCG), ventral capulse/ventral striatum (VC/VS) and others have shown promising results [44,45,46,47]. However, these have not been confirmed in blinded assessments comparing active vs. sham stimulation [48,49]. Several possibilities have been raised to account for these discrepancies, and multiple novel strategies have been proposed to improve clinical outcome. One of those is to refine targeting strategies. As some DBS targets are located in regions predominantly composed of white matter fibres, investigators have studied whether tractography could be employed to refine electrode placement.
A set of studies using tractography-based DBS in TRD was conducted by investigators bilaterally targeting the supero-lateral branch of the medial forebrain bundle (slMFB) (Figure 4) [50]. The rationale for the procedure was based on imaging studies conducted in Parkinson’s disease patients undergoing surgical treatment [51]. DBS delivered through electrodes implanted medially in the subthalamic region may induce dysphoria and mania [52,53]. A potential anatomical substrate involved in these responses has been attributed to inadvertent stimulation of the medial forebrain bundle (MFB) [51,54,55]. In a tractography study, the authors have shown a tract departing the midbrain that bifurcated into inferomedial and superolateral branches [54,55]. The superolateral branch spreads out laterally, undercutting the thalamus to ascend to the inferior portion of the anterior limb of the internal capsule, where it intermingles with the anterior thalamic radiation [54,55]. Guided by tractography, a trial was conducted in seven patients with TRD bilaterally implanted with electrodes in the region of the medial forebrain bundle [50]. Remarkably, six patients experienced robust and rapid clinical improvement within hours or days after stimulation onset, four of whom were classified as remitters at the last observation period (12–33 weeks post-surgery) [50]. In addition to short-term results, positive outcomes have been demonstrated at the last clinical follow-up, up to four years after surgery [56].
Riva-Posse and colleagues used whole brain activation volume probabilistic tractography to study tracts travelling through the subgenual region [57]. In that series, six out of 16 patients had at least 50% decrease in depression scores (i.e., responders) at six months, while ten were considered to be non-responders. After changing stimulation parameters, two of these six patients responded to treatment [57]. When analysing tractography data, the authors noticed that electrode contacts in responders were modulating a blueprint of fibre tracts, including the forceps minor, cingulum bundle and projections to subcortical nuclei [57] (Figure 5). In non-responders, these fibres did not seem to be modulated. In one non-responder who benefitted from a change in stimulation settings, the investigators activated a contact within the blueprint [57].
Following this initial work, Riva-Posse et al. have studied a cohort of 11 TRD patients using deterministic tractography to preplan electrode implantation [58]. The choice of stimulation contacts was based on post-operative probabilistic tractography [58]. After one year, nine of the eleven patients were considered to be responders, six of whom achieved remission [58]. This study provides further support to the notion that tractography-guided DBS may be important for a good postoperative outcome.
In an additional report aimed to replicate and extend our understanding of MFB-targeted DBS, four patients were followed for 52 weeks after tractography-based implantation [59]. Electrodes were activated after four weeks of single-blinded sham-stimulation. Despite the small sample size, the study reported that three of the four patients rapidly became euthymic within seven days of modulating the MFB [59].
Overall, the short-term and sustained antidepressant response produced by MFB stimulation in TRD is noteworthy. Although conclusions from these studies should be considered with caution due to the small sample size and lack of control groups, they exemplify how tractography can be used to generate hypotheses as to what structures may be modulated by DBS and refine targeting.

With the increased knowledge about the importance of fibre pathways for DBS surgery, a growing number of tractography applications have been proposed. Despite the promising work described in our review, we note that, as currently used, tractography is not without limitations. For one, tractography is unable to differentiate between afferent and efferent fibre tracts. As a result, neurosurgeons must rely on anatomical knowledge to determine the best way to modulate certain areas. Certain imaging paradigms are capable of determining directionality, such as magneto-encephalography, and may represent a multi-modal approach to understanding disease circuits [60]. Another cause for variability is noise, which can lead to uncertainty in the results. Clinicians must find a good balance between time in the scanner and practicality, as elongated scan times may cause patients to feel restless, producing motion artefacts [61]. Typically, poor image quality can be overcome by using a stronger magnetic field or with multiple DTI acquisitions [61]. Overall, white matter tractography can be time-consuming and may require specialized analysis and skillsets that may limit the accessibility of tractography-based DBS.
These limitations notwithstanding, tractography-based DBS is a feasible option over traditional DBS. Its role has been crucial in developing our understanding of the role white matter plays in disease pathology, for example, the MFB has become a target of interest in depression [50,59]. If the rapid relief in depression through MFB stimulation is confirmed and replicated in large randomized sham-controlled studies, it could potentially be a ground-breaking treatment for intractable depression.
Leveraging tractography techniques as a tool to refine DBS may also allow clinicians and researchers to better understand the aetiology behind mood disorders. Many reviews focus on targetable brain regions that may play a role in depression mentioning the role of white matter in passing [62]. However, with the rising interest in connectomics and the Human Connectome Project, the importance of fibre tracts is receiving recognition as an important factor in depression. To this end, tractography will hopefully become a commonly employed tool by neurosurgeons to ameliorate these complex psychiatric conditions.

No funds were required to conduct this manuscript.

All authors either wrote parts of the text or provided insights on the manuscript.

The authors have no conflict of interest related to this work. 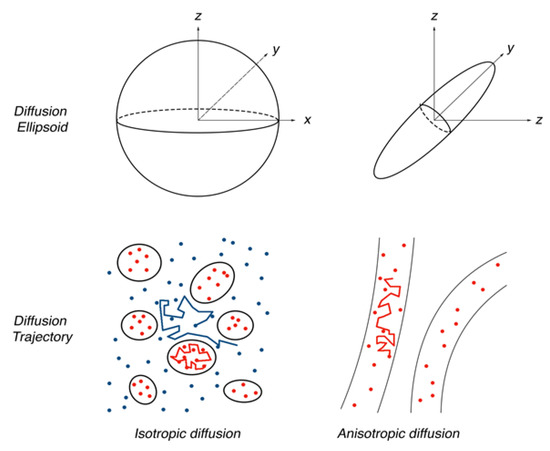 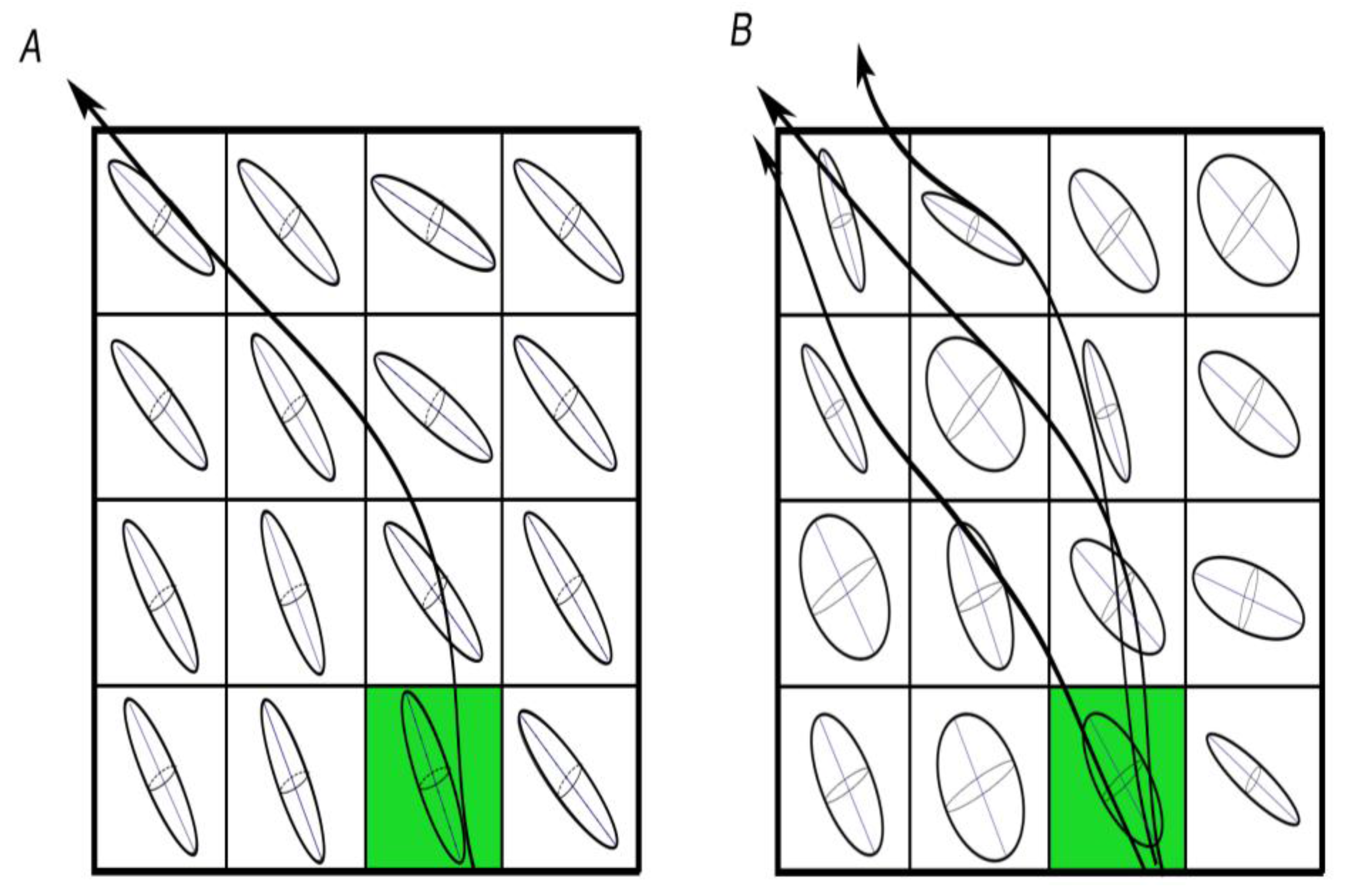 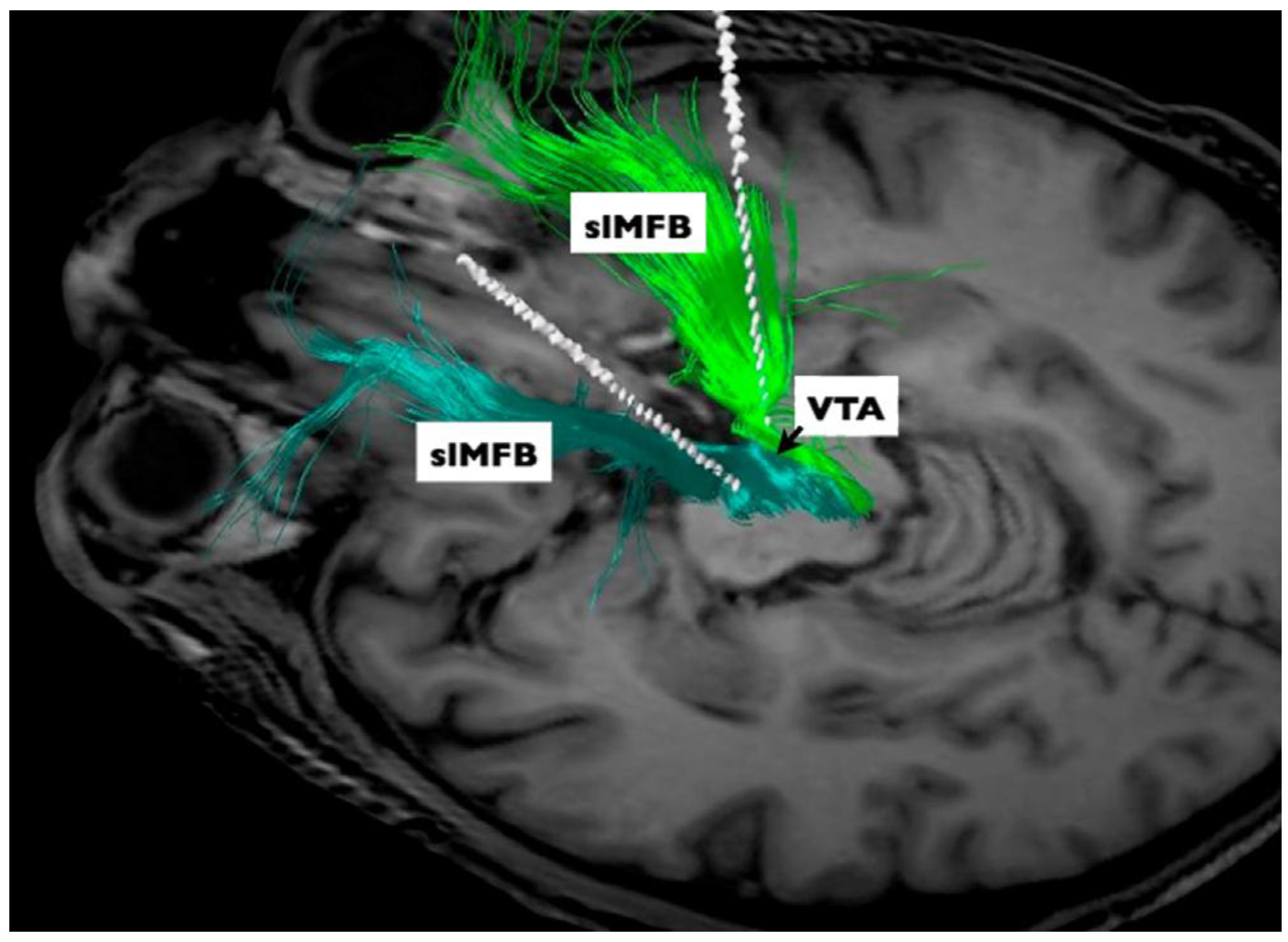 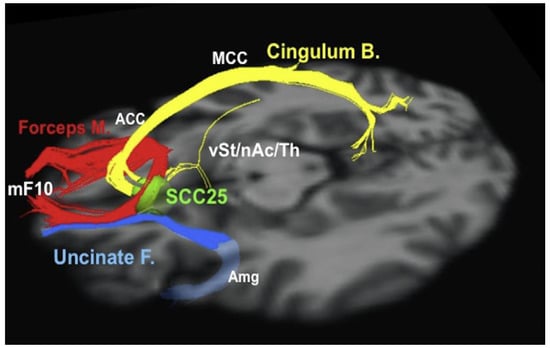